WALKING PAST PHEEBS TODAY I SAID ‘HELLO THERE MOON MULLINS’

THIS IS HOW THE AMISH-MENNONITE FOLKS STOOK THEIR WHEAT

With my RV work hat still firmly in place I was right back out into the carport first thing this morning to continue sorting, organizing, and prioritizing a number of plastic tubs we carry with us.  I have a tub for all electrical stuff like plugs, cables, extension cords etc and another one just for ropes and tie downs.  A third tub holds awing stuff like fasteners etc.  In the same bin is all our ground stakes, clips, and clamps.  A smaller bin holds our Satellite TV stuff like a spare LNB.  In opening these tubs it was not surprising to find things mixed up with right stuff in wrong places.  That happens sometimes if one is in a hurry packing up a campsite for whatever reason.  Back in 2009 I came up with a surefire way to keep track of all our stuff…..or so I thought.  You can read about my whiz bang idea in today’s post below Groaners Corner entitled, ‘Numbers On Our RV Bin Doors’. 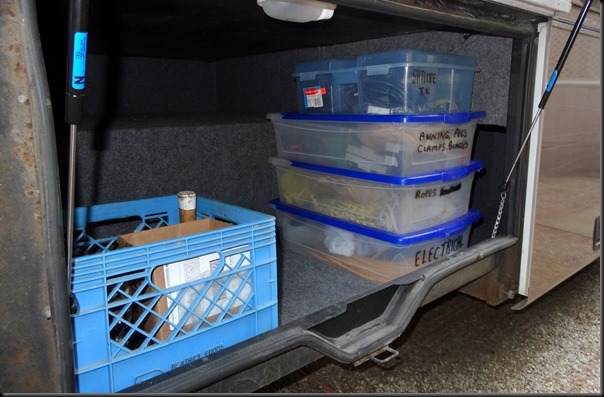 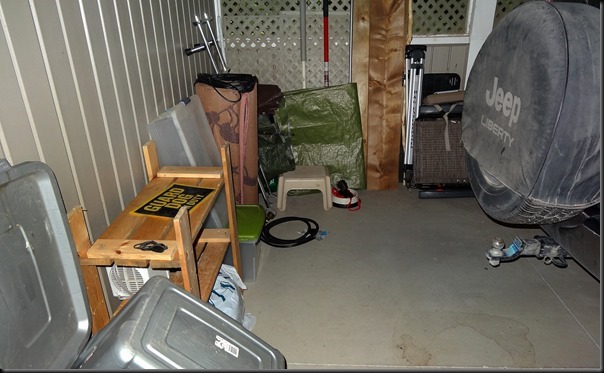 Heavy overcast with rain showers this morning and that is one of the reasons Pheebs and I didn’t  head off somewhere.  Also, we had cable TV guy coming sometime between 8:30 and noon to replace our modem and router with a new modern techno savvy machine that incorporates both those devices.  Kelly had phoned in a few days ago about some problems we were were having and when they checked our account they noticed our modem was so old they figured it must have come across on the Mayflower.  Cable guy rolled in about 12:45 and fixed us up with the new device and away he went.  Needless to say the set-up was not trouble free and Kelly was soon on the phone to Eastlink based somewhere on Canada’s east coast.  We did get our new problems resolved and so far things are working as they should.  Fingers crossed on that one of course. 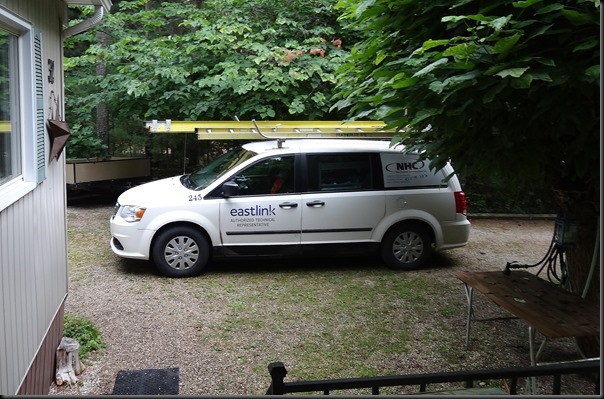 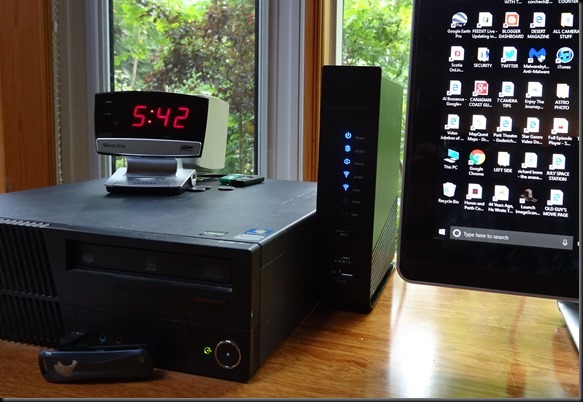 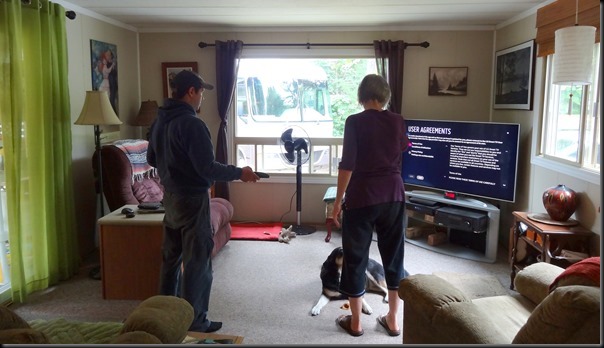 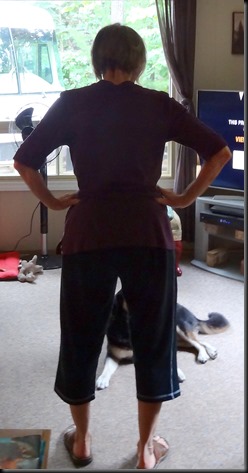 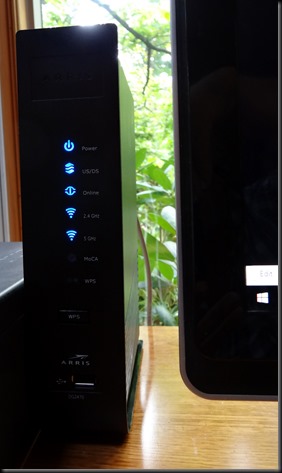 Cloudy skies prevailed for the rest of the day and we had a series of on again – off again rain showers.  Turned out to be an inside day and that is about all I can say about that.  Looks like a better weather day headed our way Friday. 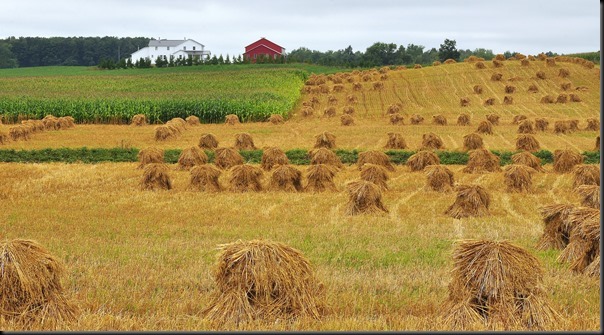 Nina from Wheeling it once again writes another fine article on her blog with this one being entitled, 6 Tips To Survive Being Together 24/7 In An RV.  She has a lot of good points and some of them stood out for me.  I think having one’s own space and taking the time to give your partner a break from you is a biggy.  We’re very lucky at home here with the addition of the sunroom years ago when it made it possible for us to hang out in different areas and especially in the evening.  Kelly watches her TV shows in the living room while I’m off in the sunroom with my music working on my blog.  Works perfect.  The RV though is a different story when traveling.  No matter which way you slice there is just isn’t an abundance of room in an RV so not a lot of good separation from one human to another.  It is just the way it is.  Kelly still likes to watch her evening TV shows but I basically have nowhere to go.  Not enough room in the bedroom to set a comfortable recliner.  Only way around it for me is to slap on my headphones and crank up the tunes while working on my blog.  And of course remember not to look up and see what’s going on with the television screen.  Here at home Pheebs and I get out every morning for a drive and that is a huge help for me as well as Kelly.  On the road I haven’t been doing that much but I think this winter Pheebs and I need to get out more in the mornings even if its just for a ride around in the desert.  I believe it is very important for individuals to have their quiet times doing whatever it is they themselves enjoy doing.  For me, spending a few hours each morning by myself has become a welcome necessity.

Walking past Pheebs today I said, ‘Hello there Moon Mullins.’  Moon Mullins??  What!!  Where did that come from?  Well it came from the distant past of course and my childhood to be exact.  Moon Mullins was a cartoon character from a comic strip I remember reading.  I wonder how many folks remember Moon Mullins or Jiggs and Maggie or, or, or, Barney Google and Snuffy Smith or, or……………………. 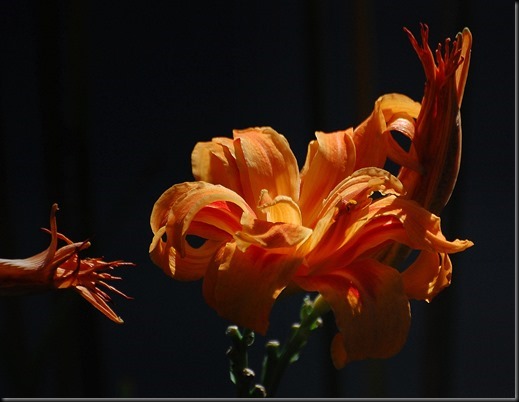 'Numbers On Our RV Bin Doors'……………  I have found that RV storage space & traveling is a good example of theory & practical application.  The trick is in keeping your theory practical.  Coming from a 5th wheel to a motorhome we were overwhelmed by all the extra storage space suddenly available to us.  Seemed like acres & acres of room to lose every imaginable thing you could think of.  I could see right off the bat that the rig had a far bigger capacity for storing things than my brain did.  I knew there was no possible way I was going to ever remember where everything was.  In my younger days I had worked for a few stores like Eatons & Sears in warehouse capacities so knew the importance of inventory, labeling, & organization.  Figured I would put that knowledge to use. First thing I did was to get some of those small sticky-back numbers & starting from the first bin on the passenger side I gave each bin a number from 1 to 13.  Thirteen was the bin closest to the front on the driver's side.  I then got myself a 3 ring binder & began recording everything I put into each bin.  I even inventoried the toolbox so I knew what was inside without having to open it.  I was pretty pleased with myself for being so orderly & my system worked flawlessly............ for about a week!! 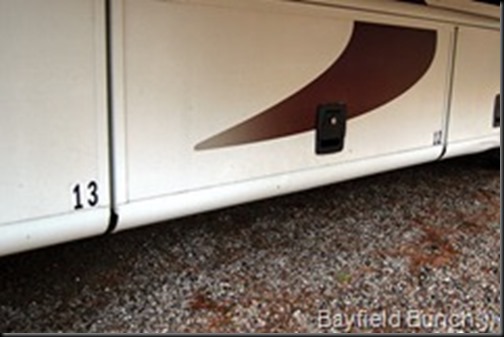 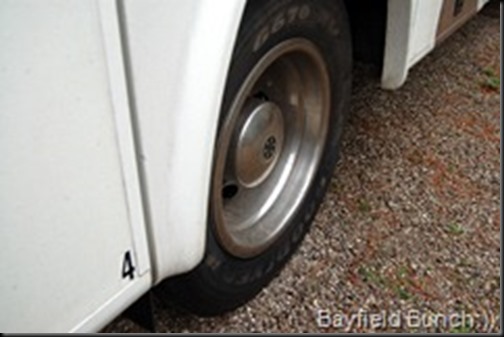 THIS WAS OUR FIRST MOTORHOME WHICH WAS A 33’ DAMON CHALLENGER

Everything looked well & good sitting at home in the driveway but within a dozen days of traveling my whole inventory was pretty much upside down.  Didn't take me long to forget about making changes to the inventory book as I rearranged things.   Going from a nice neatly organized  stationary bin arrangement in the driveway to the reality of the road with it's many last minute overnight stops, weekly campsites, & monthly stays, it was inevitable I would forget to record the dozens & dozens of changes along the way.  I was already behind the 8 ball after the first week & despite my efforts at trying to update my changes I just fell further & further behind until I finally didn't even know where my inventory book was anymore.  So much for my logical theory!!  For full timers this isn't as great a problem because they live with their stuff each & every day but for we Snow Birds it's kinda difficult with that long 5 & 6 month dry stretch in between travels.  Just when I'm getting my head wrapped around to knowing where things are while traveling it's time to head home in the spring again.  Six months later when it's time to hit the road once more I'm lucky if I can remember where I've even left the Motorhome!!   And, one last thought about storage.  That first year with the motorhome we jammed anything & everything into the rig's bins we could think of.  And why did we do that?  Because the space was there & we felt we had to fill it with something.  I am still mentally inclined that way & have to keep telling myself, "no, you do not have to fill that space!!"   This past year heading south we probably had a good 25% of our storage space empty with nearly the same percentage numbers coming back.   We're getting better:))