HENRY’S CAMERA STORE IN NORTH LONDON AND TWO THUMBS UP FOR FIORE:)) 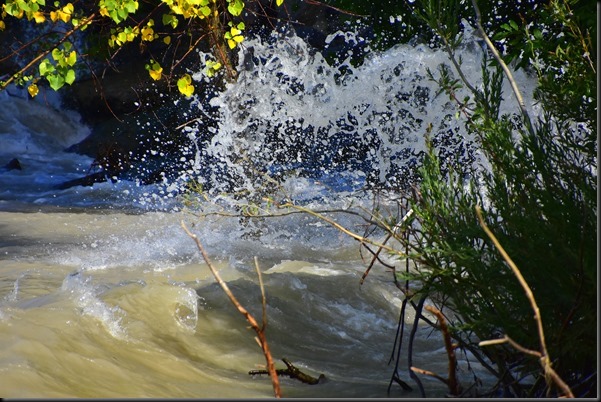 Had a couple of hours to kill before heading to London this morning so Pheebs and I took a routine run to Goderich.  McDonalds, a harbor run and a stop at Walmart for a few things before heading home again.  A beautifully cool morning with white caps on Lake Huron and crashing waves on along the shoreline. 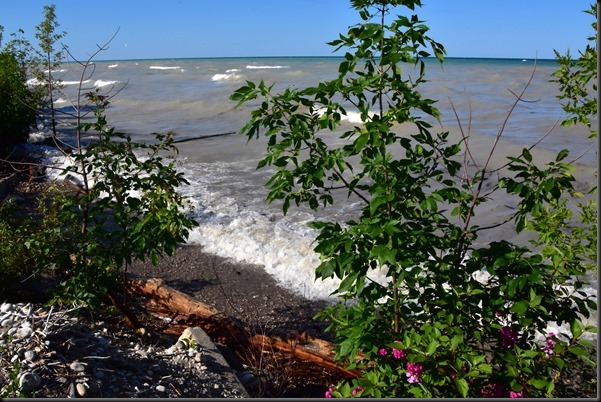 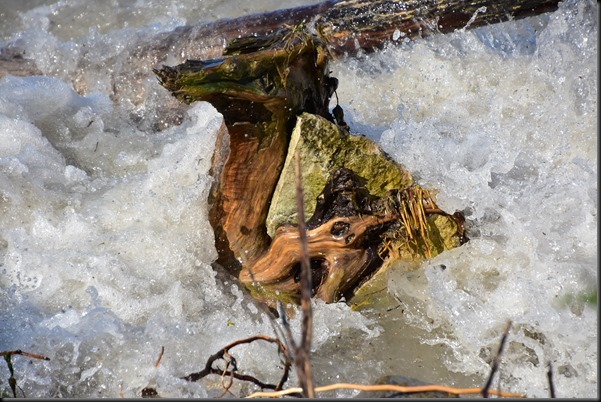 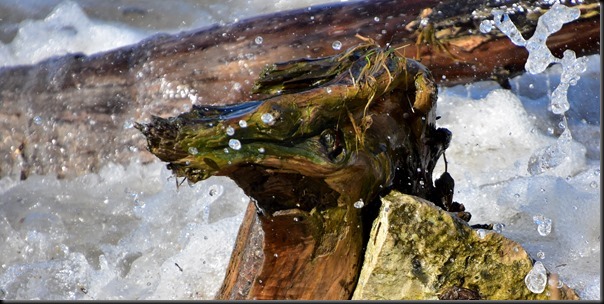 CAN YOU SEE THE DRAGON’S HEAD AND ESPECIALLY IT’S EYE? 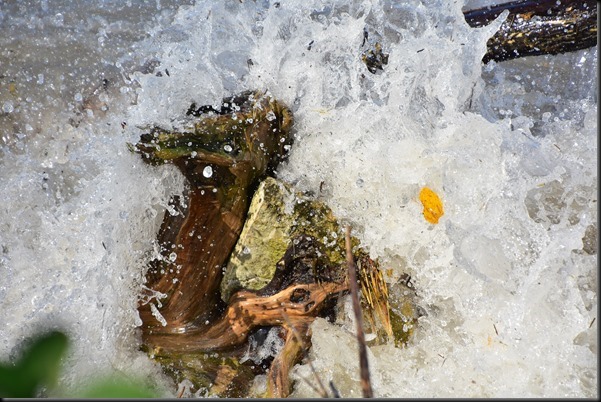 THE DRAGON GETS SWAMPED 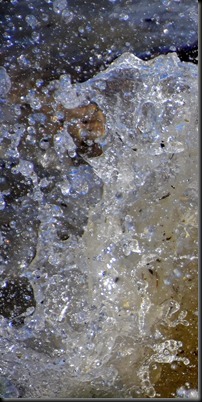 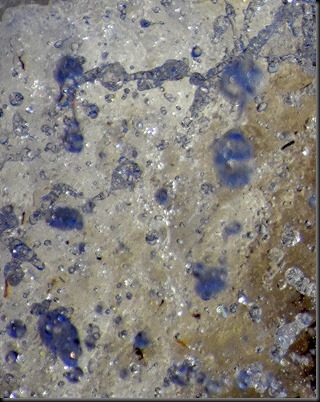 THIS IS THE PART WHERE I FELL INTO THE LAKE 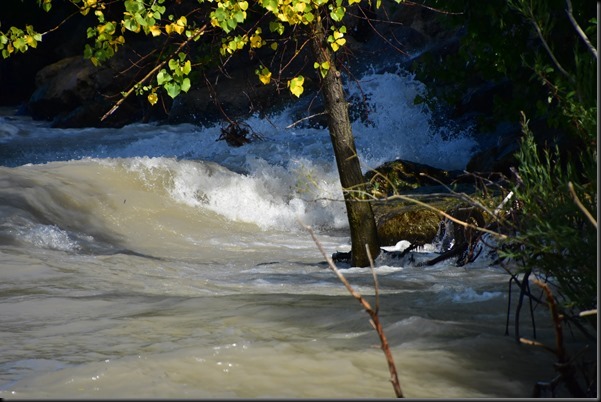 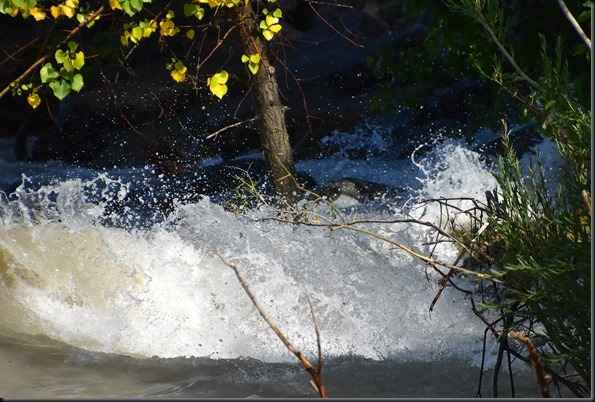 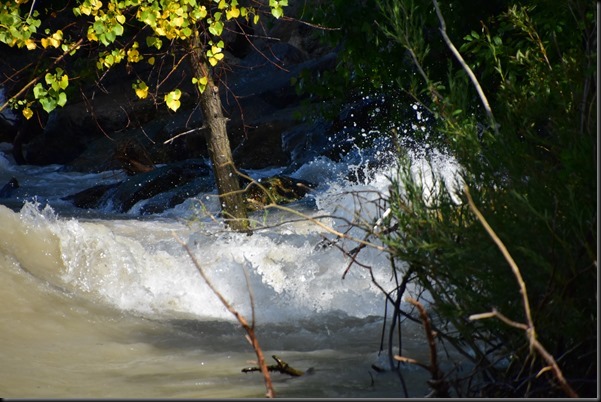 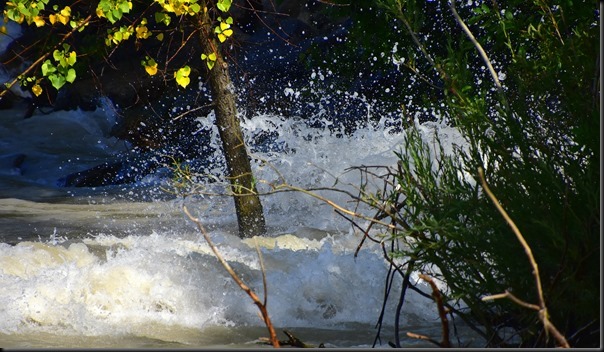 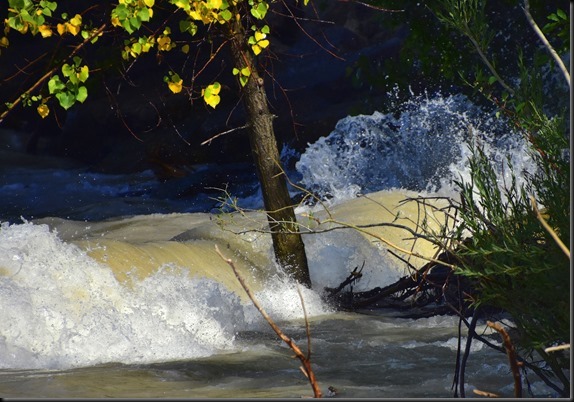 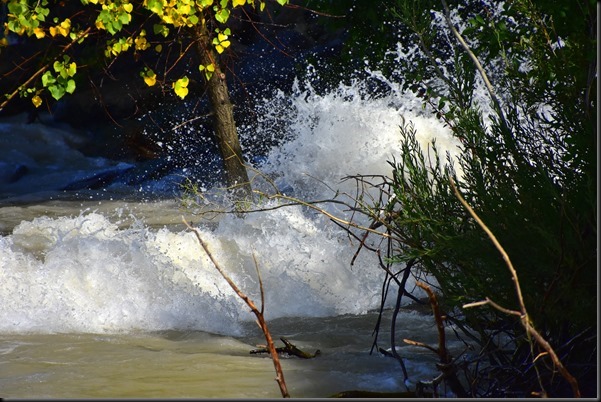 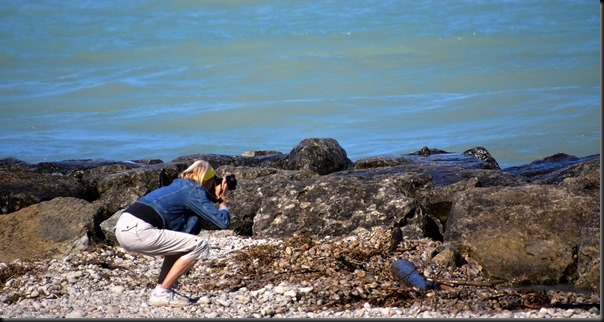 A FELLOW PHOTO BUFF ALONG THE BEACH THIS MORNING 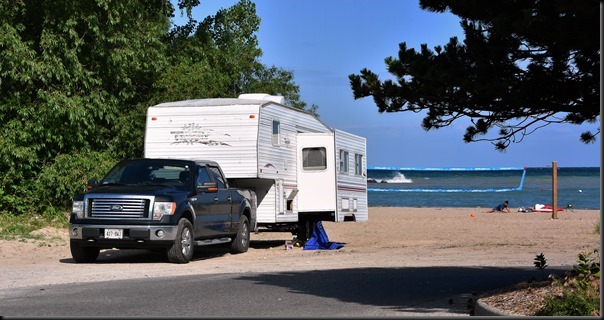 THIS RV’ER HAS A NICE SPOT 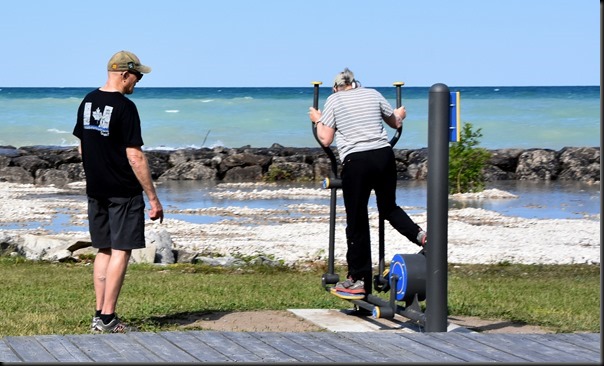 Around 11 a.m. Kelly and I headed off to Henry's Camera Store in London's north end.  Took back roads again this morning so had us a nice scenic Sunday morning drive there and back.  Today’s visit to Henry's brings to a conclusion our trade-in camera equipment deal.  Thanks to our generous camera equipment donor awhile back I have been able to update my Nikon camera line plus get myself a few extra little goodies and come out the other end of the deal with a satisfied smile on my face.  We were also very fortunate to have a Henry's Camera employee who we both liked and felt comfortable with.  The fellow's name is Fiore and he's an older chap.  Much easier for me to communicate with someone closer to my own age and not feel intimidated or be overwhelmed with a lot of techie talk.  For a few years in the mid 80's I was in the retail photo business on the other side of a camera counter so I know a little bit about dealing honestly with people and keeping things simple.  Really appreciated Fiore’s honesty, understanding, and patience and he went the extra distance to make sure we walked out of that Henry's camera store satisfied customers.   Two thumbs up for a good guy:)))))) 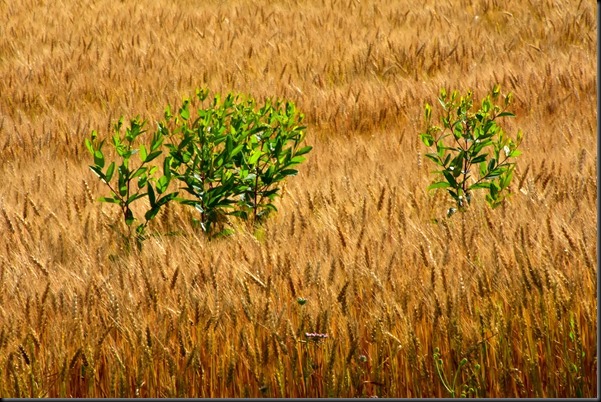 A FEW WEEDS IN A LOCAL WHEAT FIELD 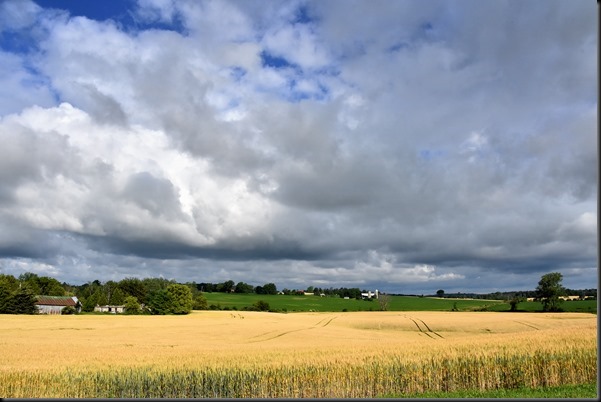 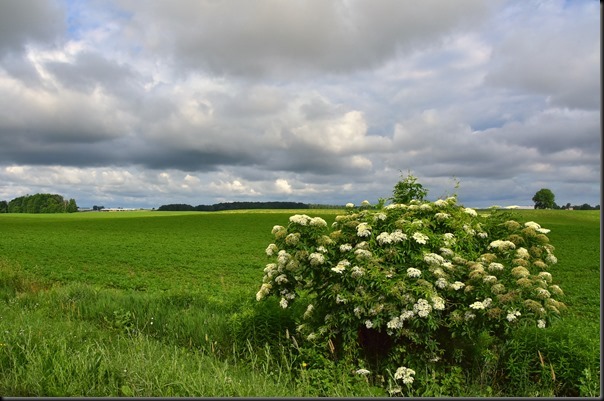 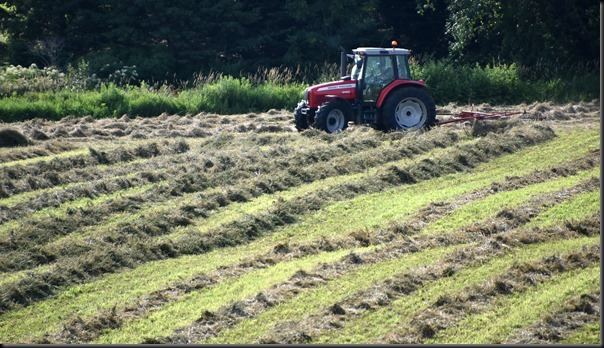 RAKING UP A FIELD OF HAY 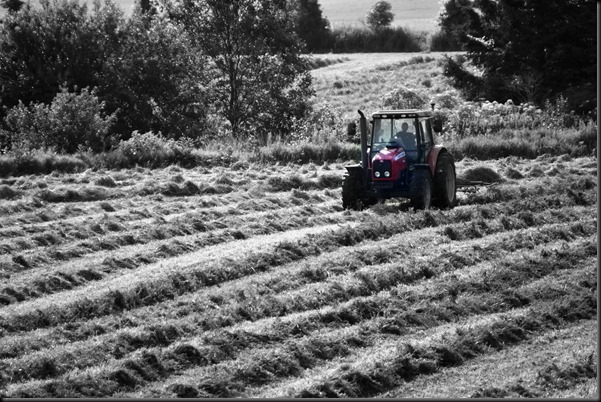 The day's temperatures came up and we had to kick on the Jeep's A/C for the ride home.  Our Jeep Wrangler never had A/C and we both remarked how thankful we are that we have A/C in our Jeep Liberty.  Just one of those little perks that makes our daily lives a little more comfortable and as we age that comfort level steadily becomes importantly more important. 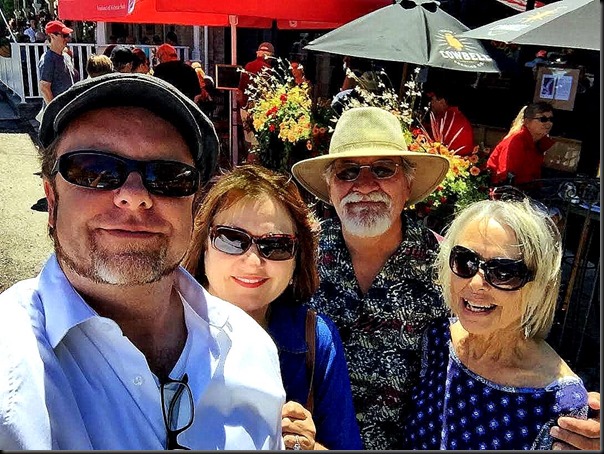 GROANER'S CORNER:(( A man goes to see the Rabbi. 'Rabbi, something terrible is happening and I have to talk to you about it.'  The Rabbi asked, 'What's wrong?'  The man replied, 'My wife is poisoning me.'  The Rabbi, very surprised by this, asks, 'How can that be?'  The man then pleads, 'I'm telling you, I'm certain she's poisoning me, what should I do?'  The Rabbi then offers, 'Tell you what. Let me talk to her, I'll see what I can find out and I'll let you know.' A week later the Rabbi calls the man and says, 'Well, I spoke to your wife. I spoke to her on the phone for three hours. You want my advice?'  The man said yes and the Rabbi replied, 'Take the poison.'

Knock Knock
Who's there?
Datsun!
Datsun who?
Datsun old joke!

What If Dr. Seuss was a Technical Writer?

If a packet hits a pocket on a socket on a port, and the bus is interrupted as a very last resort, and the address of the memory makes your floppy disk abort, then the socket packet pocket has an error to report!   If your cursor finds a menu item followed by a dash, and the double-clicking icon puts your window in the trash, and your data is corrupted 'cause the index doesn't hash, then your situation's hopeless, and your system's gonna crash!

If the label on the cable on the table at your house, says the network is connected to the button on your mouse, but your packets want to tunnel on another protocol, that's repeatedly rejected by the printer down the hall.

And your screen is all distorted by the side effects of gauss so your icons in the window are as wavy as a souse, then you may as well reboot and go out with a bang, 'cause as sure as I'm a poet, the sucker's gonna hang!  When the copy of your floppy's getting sloppy on the disk, and the microcode instructions cause unnecessary risk, then you have to flash your memory and you'll want to RAM your ROM.  Quickly turn off the computer and be sure to tell your mom!