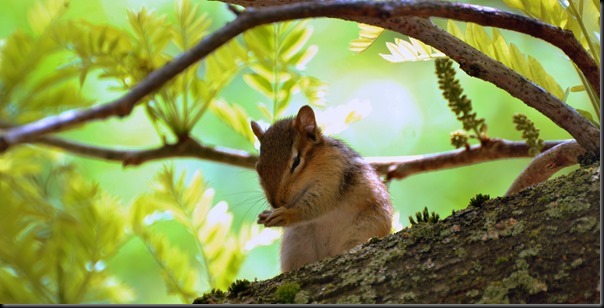 CHIPPY THE CHIPMUNK IN OUR SUNBURST LOCUST TREE TODAY

With clippers in hand it was under cool cloudy skies Pheebs and I took ourselves for a leisurely early morning walk around on what we like to call our Pine Tree trail.  With a chorus of ‘Chugerums’ coming from our Park’s pond we passed quietly by a number of little froggy heads sticking out of some rather brackish looking water.  Tree top song birds were the only other sounds we heard on our relaxing walk. 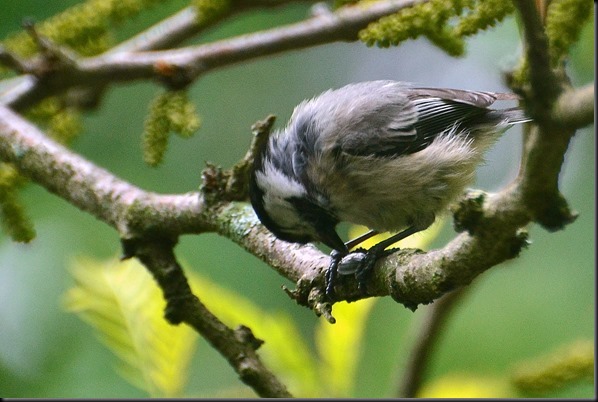 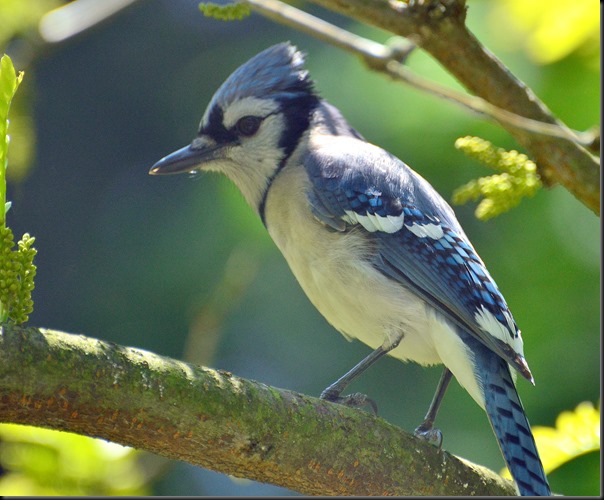 ALWAYS NICE TO SEE BLUE JAYS OUTSIDE OUR WINDOWS

DAY AT THE BEACH

Several months ago my Nurse Practitioner suggested I try a pair of pressure stockings for my troublesome legs.  After awaiting the results from a Doppler scan on my legs ‘she phoned about a month ago’ to say I could pick up a prescription for those stockings at the Maitland Valley Medical Center.  Note the key words there ‘she phoned about a month ago’.  It took my mind that long to remember her phone call.  This morning Pheebs and I hustled right on up to the medical center where I picked up that prescription.  I was only in the medical center about 4 minutes and upon leaving I saw a familiar looking doggy sitting outside the main door looking in.  It was the Pheebs.  I had forgot to roll up the Jeep’s passenger window so she had jumped out and headed across the parking lot over to the door where she had last seen me enter the building.  Now if I could just remember everything I have forgotten I might have a chance of getting ahead of this absent minded brain of mine one of these day. 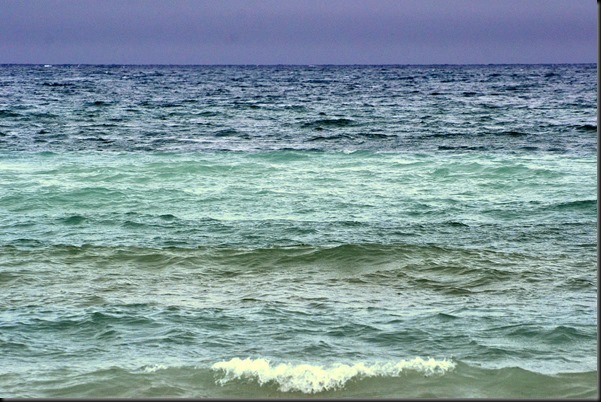 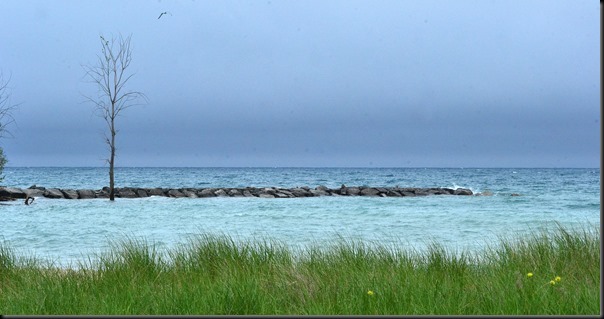 Of course most anytime we are in Goderich we generally take ourselves for a drive down around the harbor and beach area and this morning was no exception again.  Noticed workmen and trucks clustered off to the lake side of the road in Rotary Cove.  Turns out they were installing exercise equipment.  Couple weeks ago I drove along there and saw workman pouring small cement pads which I later found out were to be used for mounting the very exercise equipment these fellas were installing this morning.  This equipment is right alongside the wooden boardwalk which happens to run almost the full length of the public waterfront.  Joggers, hikers, and walkers on the boardwalk can now stop off at any of the exercise stations at Rotary Cove and have themselves a cardio vascular work-out while enjoying the marvelous views of Lake Huron right in front of them. 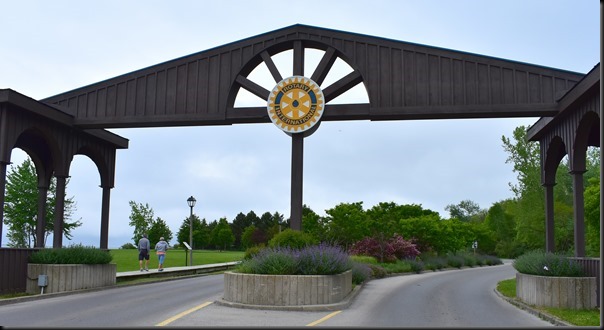 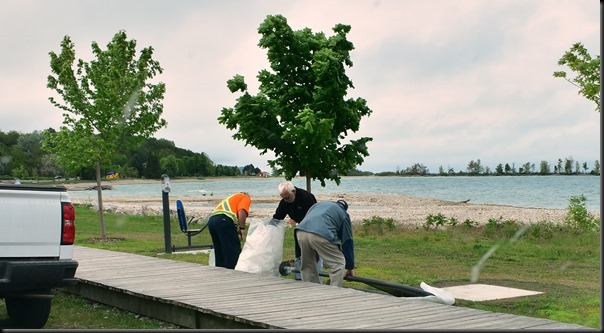 LOOKS LIKE THE BOYS ARE UP TO SOMETHING THERE 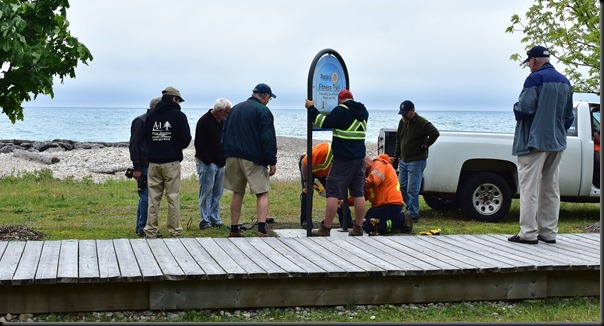 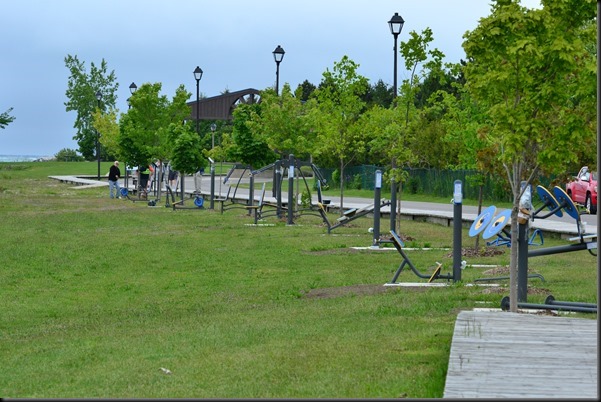 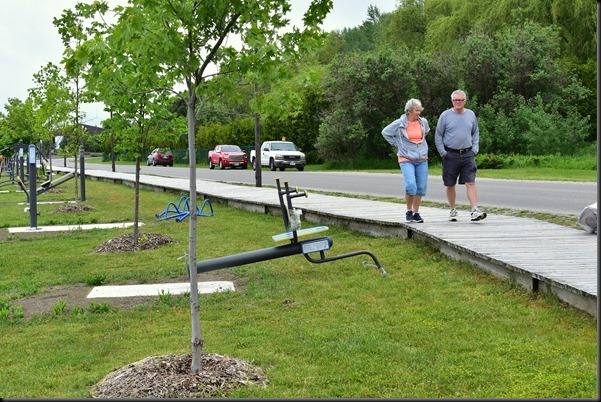 COLD WIND OFF THE LAKE AND I WAS GLAD I WAS BUNDLED UP WARM THEN ALONG COMES THIS GUY IN SHORTS…………….

We were back home again by 11 and I spent the next half of the day like we so often do enjoyably puttering about outside taking care of weeds, planting or transplanting stuff etc. etc.  For lunch we had us a couple hot dogs without the buns and I had an additional big bowl of porridge.  And if anyone is not knowing what porridge is just remember the story of Goldilocks and the Three Bears. 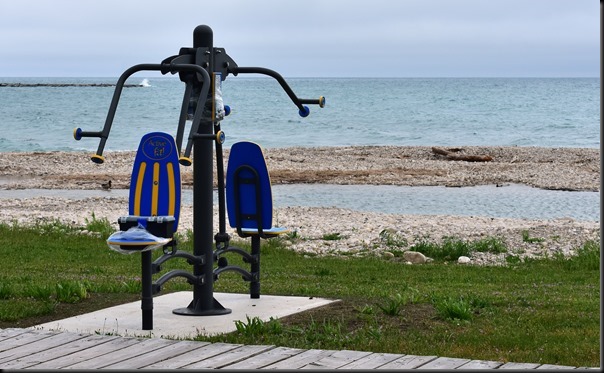 NOT ALL EQUIPMENT IS ASSEMBLED YET 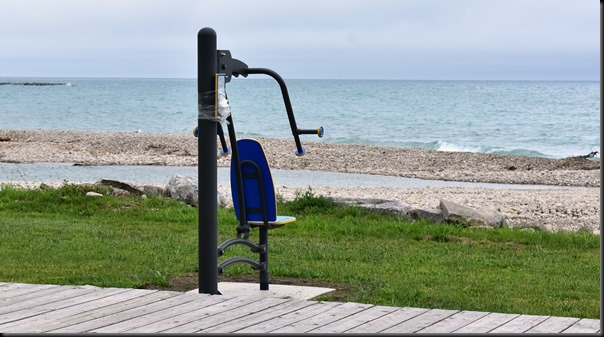 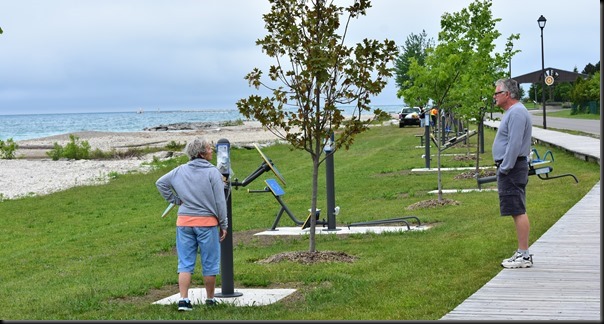 “WELL, DO YOU THINK WE SHOULD GIVE IT A TRY DEAR”??….”NAWWW, LET’S GO HOME MY LEGS ARE COLD 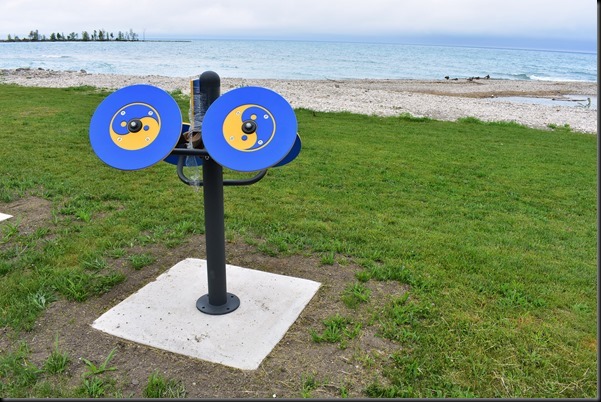 I HAVE NO IDEA WHAT THIS PIECE OF EQUIPMENT IS….MAYBE IT’S A SET OF BONGO DRUMS FOR FINGER EXERCISES 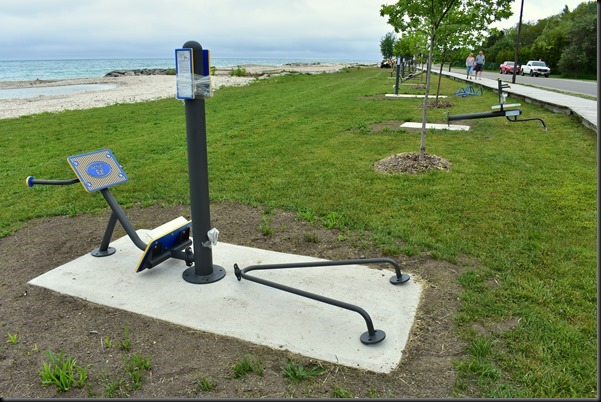 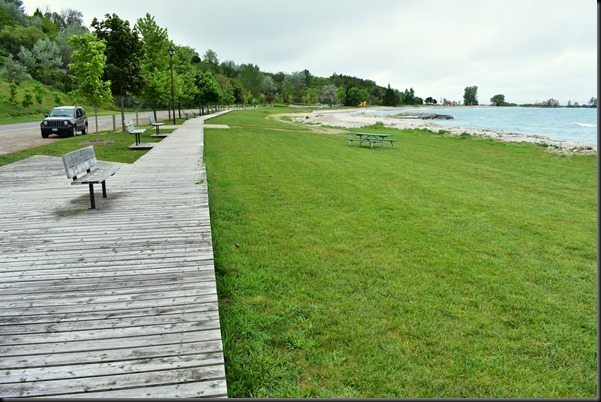 LOOKING SOUTH ALONG THE BOARDWALK…..EXCERSIZE EQUIPMENT IS JUST BEHIND ME

I was luckily able to help out a painted Turtle earlier this afternoon when I found it stuck between our rain barrel stand and a wooden block.  The little fella must have lost it’s way from the Park’s pond and sensing water in our rain barrel got himself stuck trying to reach it.  Picked the little guy up, put him in a bucket and carried the bucket back to the pond where I gently placed him in the water wishing him well as he swam happily away.  You probably don’t want to hear about the Dew Worm I saved from drowning tonight in our front yard frog pond……………. 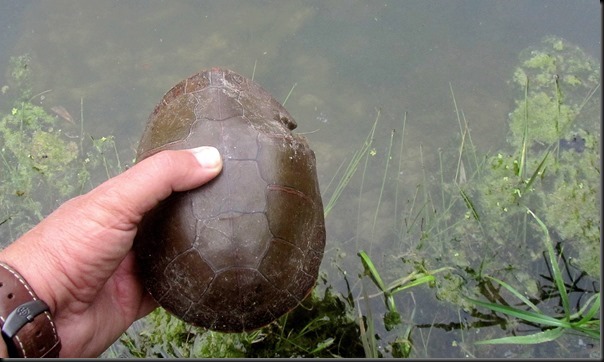 NOTICE THE CHUNK OUT OF THE PAINTED TURTLE’S SHELL TOP RIGHT SIDE….I FIGURE A BIGGER SNAPPING TURTLE MIGHT HAVE DONE THAT DAMAGE AT SOME POINT

Really enjoying all the old ‘found’ VHS tapes from yesteryear.  Today watching a tape from the summer of 97 at the ‘old farm house’ Pheebs heard Kelly’s voice on the TV and jumped up on the stool and watched the video with me.  On screen below is Kelly in the orange and my Uncle Harry to the right in a yellow jacket.  Also present at that supper table were Harry’s wife Ethel, Aunt Jean from Florida and cousin Mary Ann Klein from Tavistock Ontario.  Oh and I am sitting there as well. 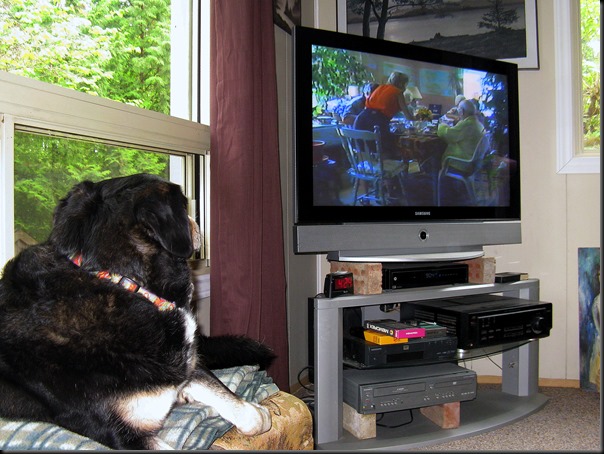 Tonight’s supper was a repeat of Sunday night’s supper with the exception that I heated up the corn this time.  And that was it, nothing more nothing less but I did have a peanut butter and honey sandwich about 2 this afternoon to tide me over between lunch and supper. 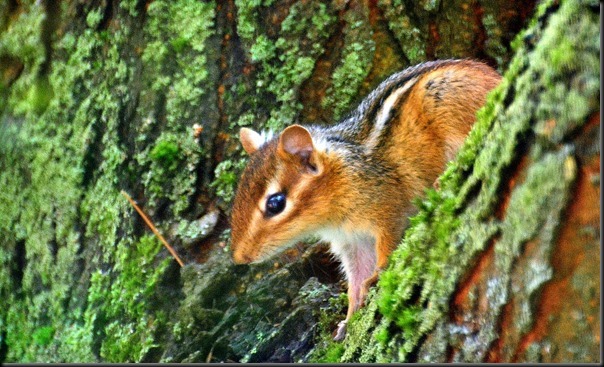 GROANER’S CORNER:(( Bill and Bob, two Government mechanical engineers, were standing at the base of a flagpole, looking up.
A woman walked by and asked what they were doing. 'We're supposed to find the height of the flagpole', said Bob, 'But we don't have a ladder.'
The woman said, 'Hand me that wrench out of your toolbox.' She loosened a few bolts, then laid the pole down. She then took a tape measure from their toolbox, took a measurement and announced, 'Eighteen feet, six inches' and walked away. Ray shook his head and laughed. 'Ain't that just like a 'Miss-know-it-all' woman?' he said.
'We need the height and she gave us the length!'
Bob and Ray are still working for the Government.

So Moses is up on Mount Sinai and he says to God, "God, do I ever have a pounding headache!"
And God says, "Here, take these two tablets."

A man was driving along a freeway when he noticed a chicken running along side his car. He was amazed to see the chicken keeping up with him because he was doing 50 MPH.   He accelerated to 60 and the chicken stayed right next to him. He sped up to 75 MPH and the chicken passed him.   The man then noticed that the chicken had three legs, so he followed the chicken down a road and ended up at a farm.   The curious man got out of his car and noticed that all the chickens had three legs. He asked the farmer, "What's up with these chickens?"   The farmer explained, "Well, everybody likes chicken legs, so I bred a three-legged bird. I'm gonna be a millionaire."   "How do they taste?" asked the man.   "Don't know," replied the farmer, "haven't caught one yet."