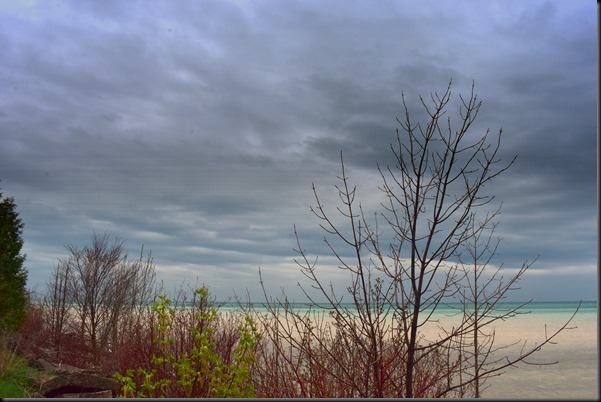 STARTED OUR DAY OFF UNDER CLOUDY RAIN SOAKED SKIES

Despite the overcast gray day and falling rain my first thought stepping out the door this morning was ‘Thank-you’.  At least it wasn’t freezing cold with our temps up to 61F from 41F Sunday about the same time.  The warmer temperature spurred me on right away to plant a bunch of Morning Glory seeds in a number of pots and containers.  If all those seeds grow we will be nicely overwhelmed with Morning Glories this summer. 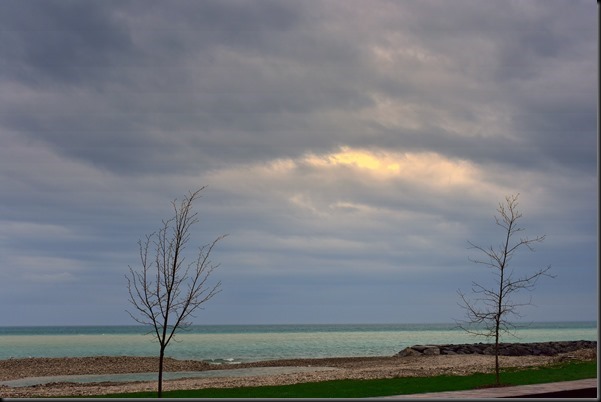 Rain let up and with a few things to pick up Pheebs and I headed on up to Goderich.  Down to Rotary Cove’s south end and off we went for trot in the dog walking area.  About the time we got as far from the Jeep as we could the rains were again upon us.  Carrying two cameras it was a quick trot back to the car.  Wind was behind us and because I am round shouldered and a tad stooped forward my cameras stayed dry in the protective lee of my upper torso.  These torsos do come in handy for things from time to time you know.

Quick stop at Walmart and then headed home in a deluge of rain.  Couple hours later skies began to brighten so I didn’t waste any time getting outside to resume my little back yard project.  I’m working on my 3rd revision in as many weeks and finally might be getting somewhere.  Exactly where I have no idea but I’m having fun getting there anyway. 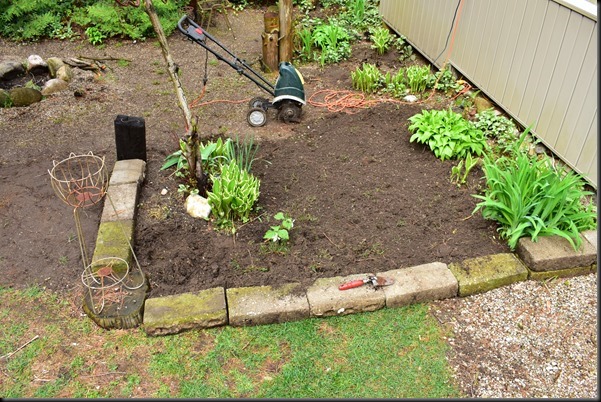 ROUGHED OUT ANOTHER NEW PATTERN WITH A FEW CEMENT BLOCKS 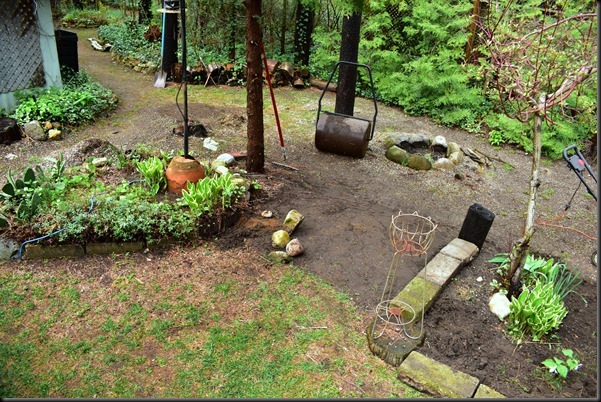 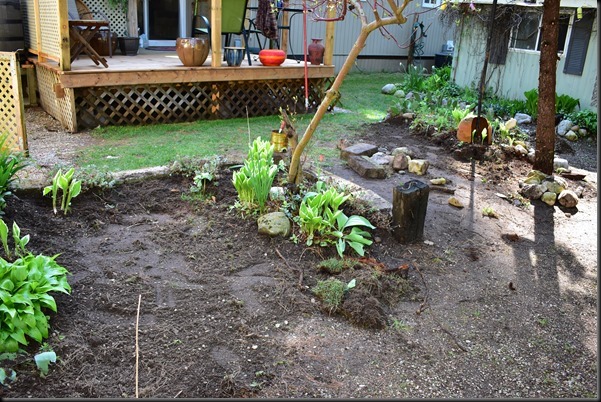 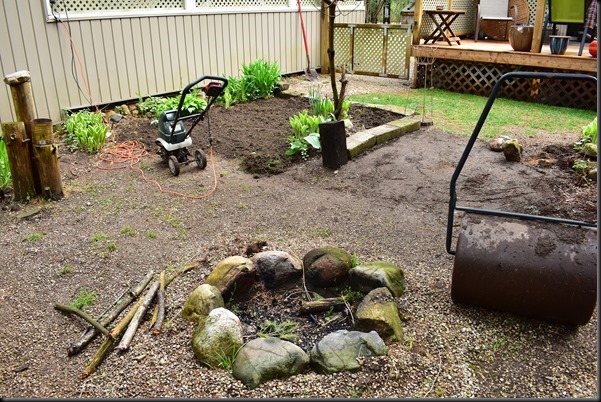 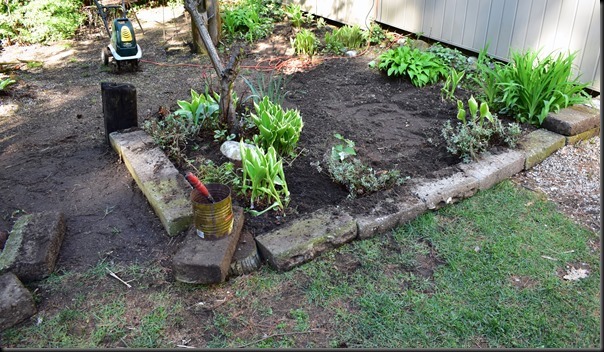 RELOCATED A BUNCH OF HOSTAS AS WELL 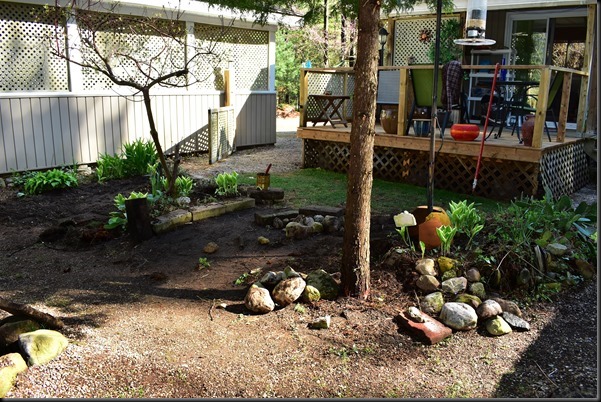 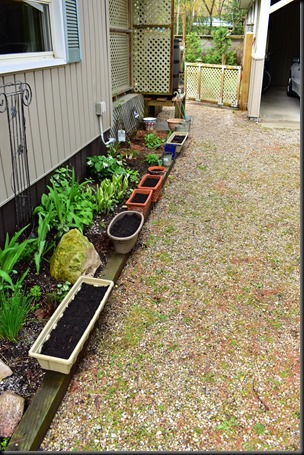 <<< EVERY ONE OF THOSE CONTAINERS IS FILLED WITH MORNING GLORY SEEDS

Just finished a short book on my Kindle entitled ‘The Introvert Writer’.  Found the book interesting of course and especially something I came across.  I am not a fan of most cutsy patootsy phrases and slogans.   You know the ones found on the internet and Hallmark cards etc.  There is one particular saying that has always irked me to no end because of it’s totally illogical meaning and it’s this one…….  'You-can-be-anything-you-want-to-be’.   I won’t go into why I think this is a ridiculous phrase because it should be obvious.  Imagine my delight when reading ‘The Introvert Writer' and he mentioned this very phrase and then came back with what I consider the way it should have been written in the first place when he said, ‘You cannot be anything you want to be -- but you can be a lot more of who you already are'.  Wowie KaZowie I thought to myself now that makes a whole lot more good darn sense.  After all these years of being bugged by the ‘you can be anything’ saying somebody finally nailed it.  Now why didn’t I think of that!!

A TAD BLURRY BUT I LIKED THE COLORS 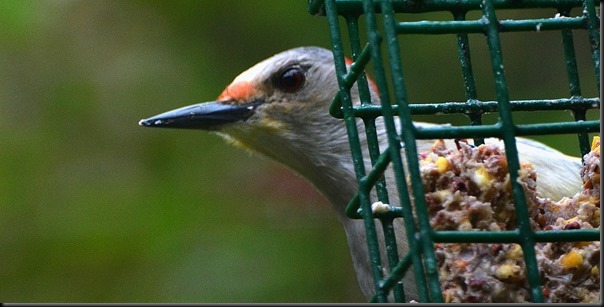 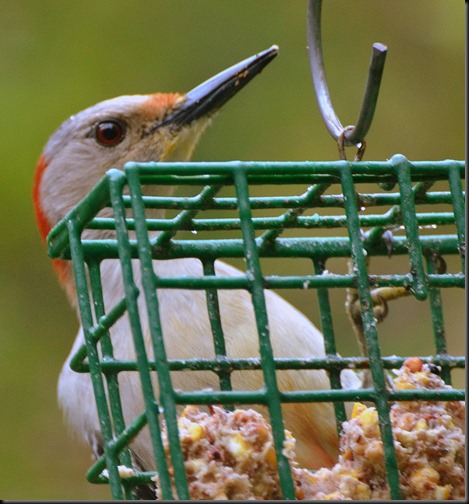 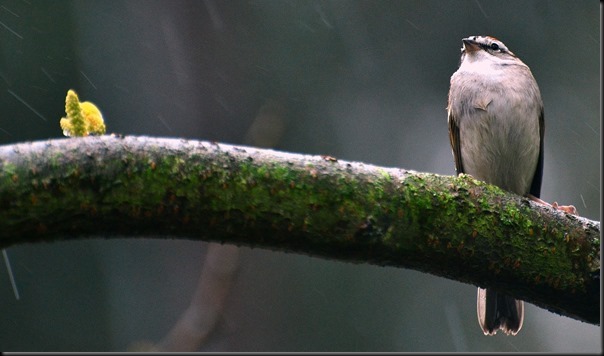 I call and talk to Aunt Jean every week and Tuesday she’ll be out with friends again making her way around another one of Sarasota Florida’s 18 hole golf courses.  Despite a few very worrisome health problems awhile back she has rallied amazingly well for her nearly 90 years.  Still gets out for her daily morning walk and whips around in that manic Sarasota traffic like it’s the Daytona 500.  Such a totally amazing person she is.  And she’s my Aunty:)) 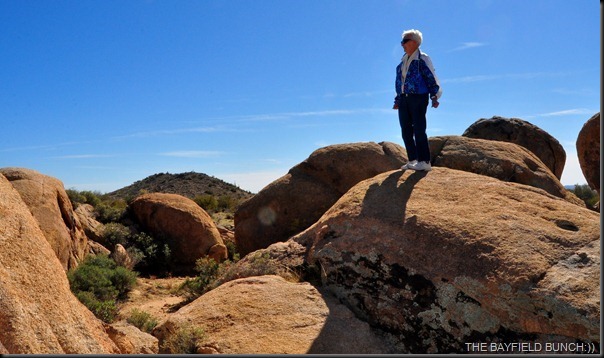 GROANER’S CORNER:(( "I hope you didn't take it personally, Reverend," an embarrassed woman said after a church service, "when my husband walked out during your sermon."  "I did find it rather disconcerting," the preacher replied.  "It's not a reflection on you," insisted the church goer. "Ralph has been been walking in his sleep since childhood."

On a recent flight, an elderly passenger kept peering out the window. Since it was totally dark, all she could see was the blinking wing-tip light.
Finally, she rang for the flight attendant.
"I'm sorry to bother you," she said, "but I think you should inform the pilot that his left-turn indicator is on and has been for some time."

A tramp knocked on the door of the inn known as St. George and the Dragon. The landlady answered the door. The tramp said, “Could you give a poor man something to eat?” "No,” said the woman, slamming the door in his face. He knocked again and said, “Could I have a few words with George?”