PHEEBS AND I TAKE THE ‘BIG EEE’ FOR A MORNING CRUISE 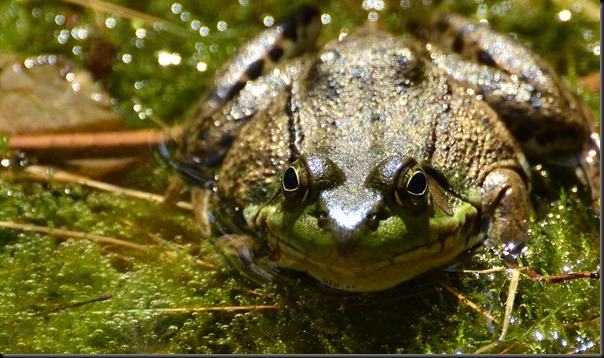 With gray scraggly shards of graying hair drooping down over my sizeable ears again Kelly had at me this morning with a pair of scissors and a lot of patience.  She called it a ‘summer cut’ and I lost a big chunk of my top knot gray matter right then and there. 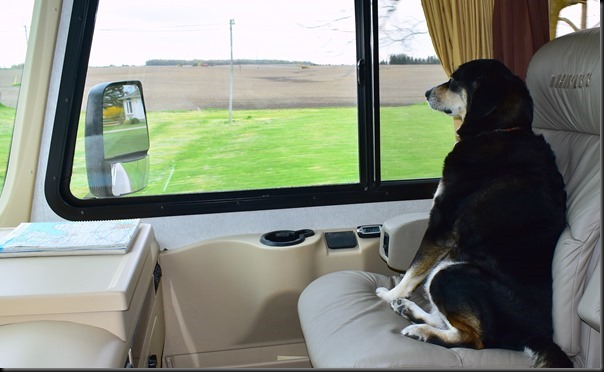 ME AND MY PAL CRUISING ALONG IN THE MOTORHOME THIS MORNING 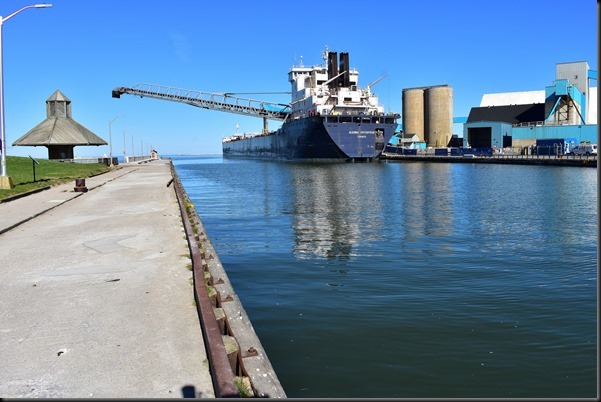 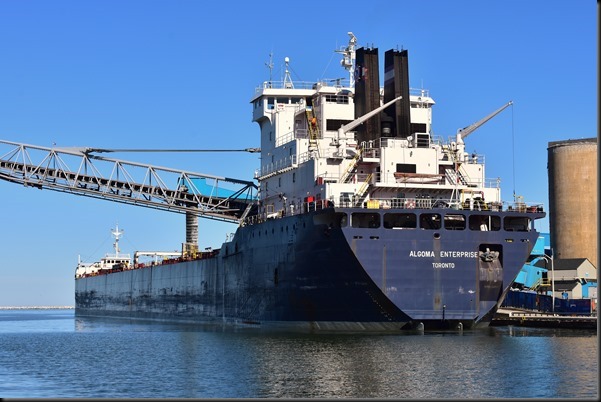 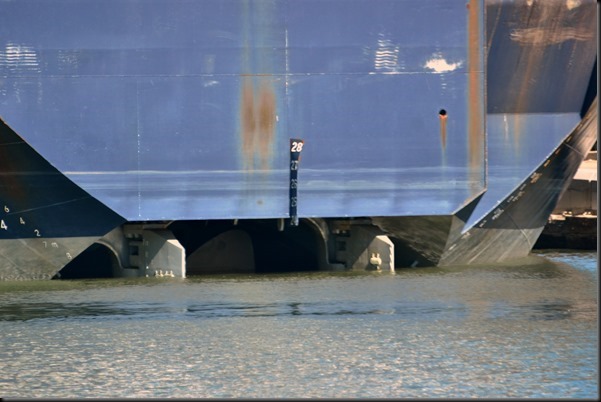 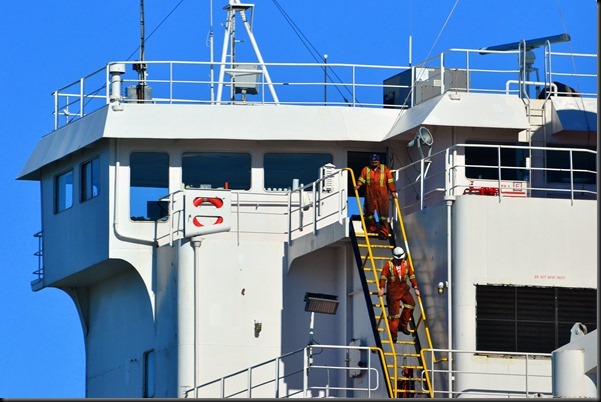 A COUPLE CREW MEMBERS HUSTLING DOWN A LADDER 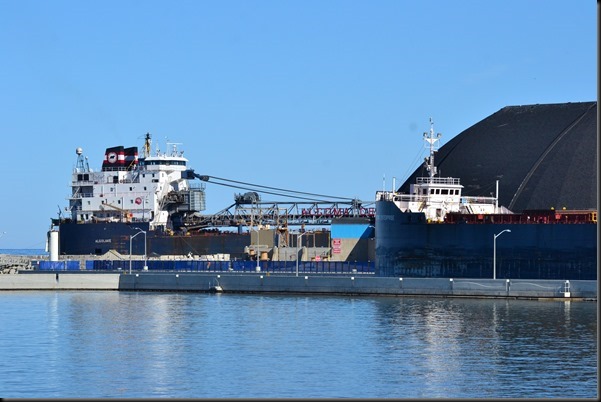 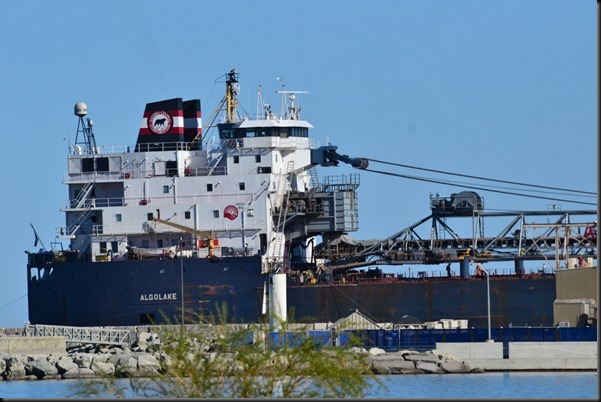 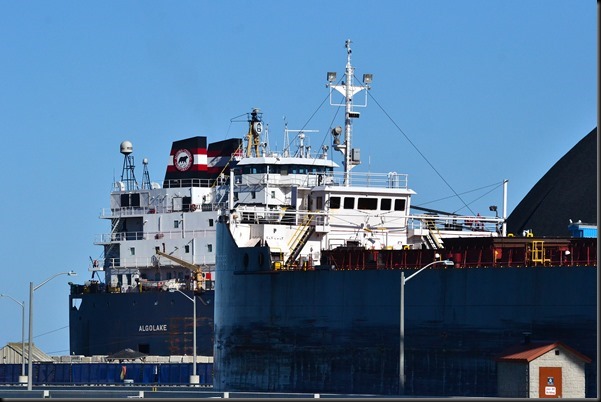 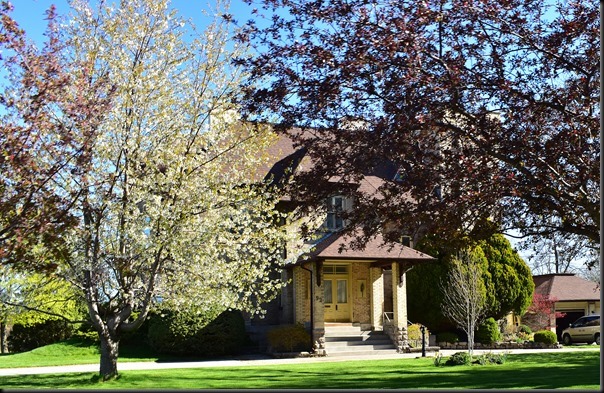 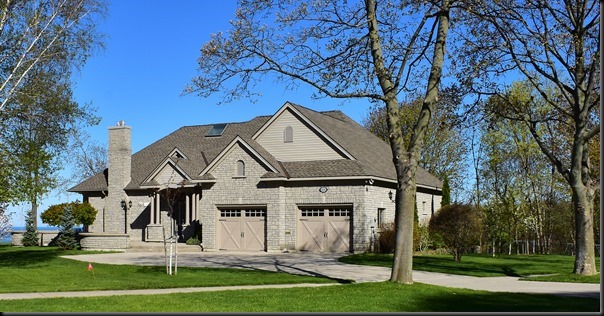 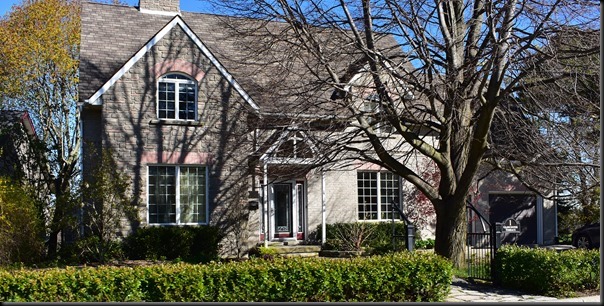 Needing to run a few errands in Goderich Kelly saddled up her Sunfire and headed out around 9.  Pheebs and I saddled up as well and headed off in a different direction…..in the Motorhome.  I generally like to take the ‘Big EEE’ out about once a month or so while we are home from the southwest and this morning seemed about as good a time as any.  Good idea to get the squareness out of the tires and give the rigs automotive side a workout.  All systems were go and the rig ran like a top.  Did it stir my lurking ‘hitch-itch’??  Nope not at all…..but in due time I’m sure it will:))

HEADING NORTH OUT OF GODERICH TUESDAY MORNING WE WERE SOON INTO WIND TURBINE, CATTLE,  AND HORSE COUNTRY 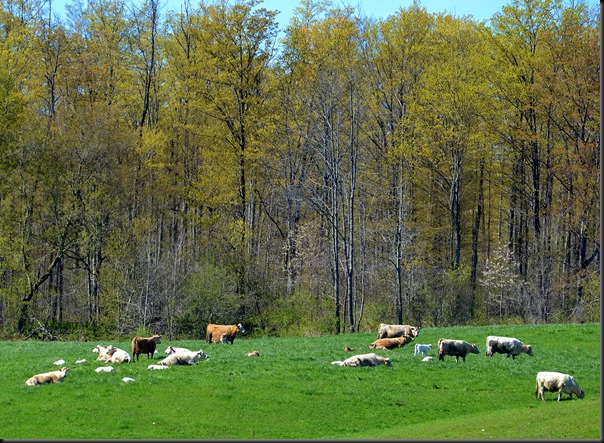 THESE HORSE PHOTOS WERE TAKEN ON MENNONITE FARMS 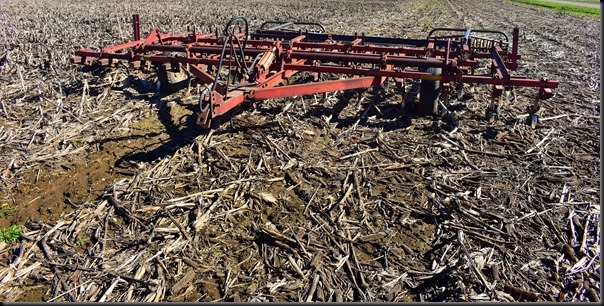 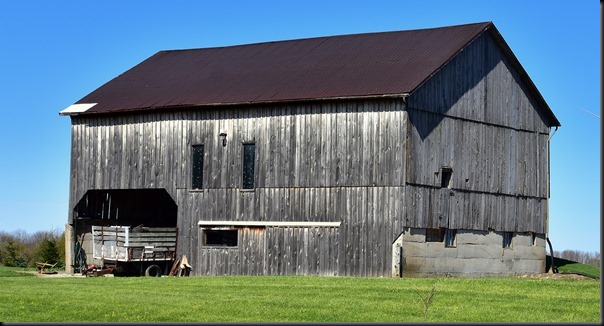 Bit of a cool overcast morning so I tucked myself into my favorite sunroom corner and read for awhile.  Oh and I did a load of laundry and the dishes too.  I later dozed off in my recliner and woke up to brilliant sunshine and blue skies so out the door I quickly went and spread some more mulch in the flower beds.  Pretty exciting day so far eh.  A partial cloud cover returned about mid afternoon and it was back to my chair and my Kindle.  I am so thankful Kelly suggested I get a Kindle a few years ago.  Sure is great to be reading again after a long absence.  And I sure seem to be making up for lost time as well. 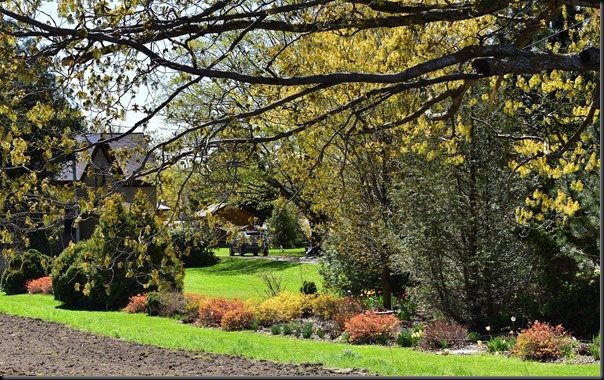 I LOVE THESE KINDS OF RURAL PROPERTIES 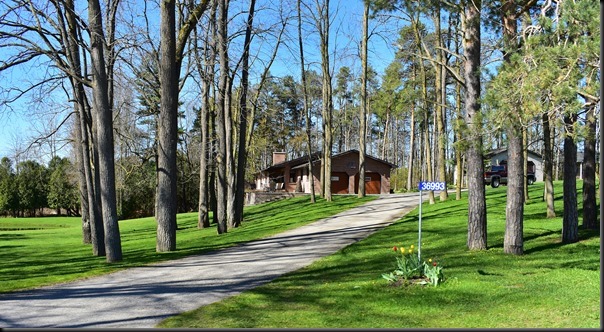 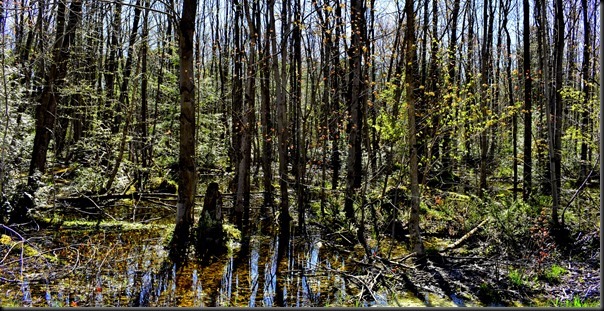 So nice to see some of our Spring songbirds beginning to arrive.  I have a feeling most of them are just on the other side of Lakes Ontario and Huron with their suitcases packed waiting patiently for warmer weather.  It can be a long flight for some of those little fellers across all that water with no place to set down.  A warm southerly tail wind always helps them along though and I have heard that they do wait for those tail winds too. 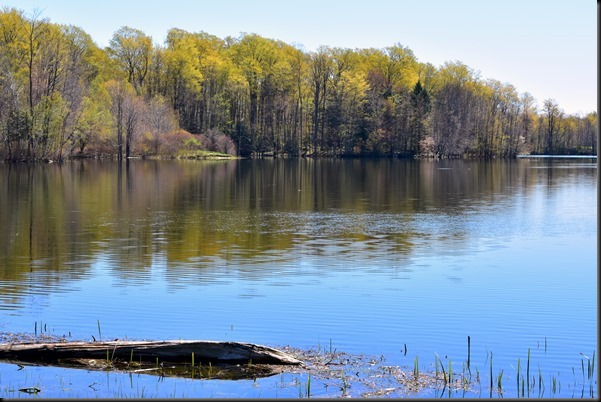 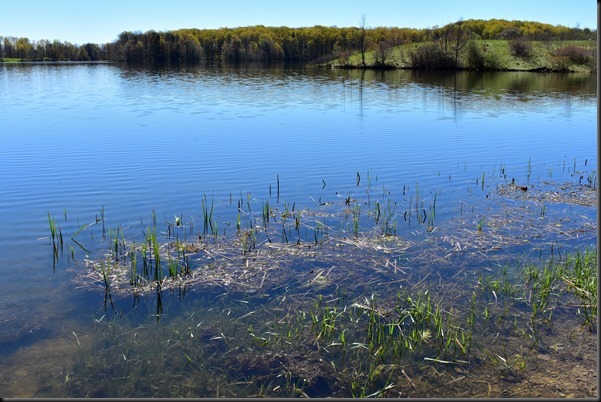 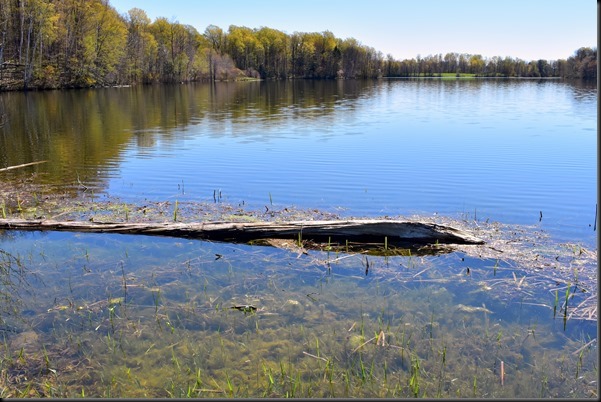 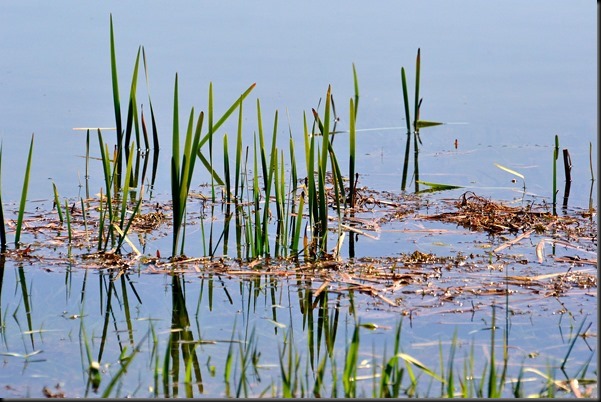 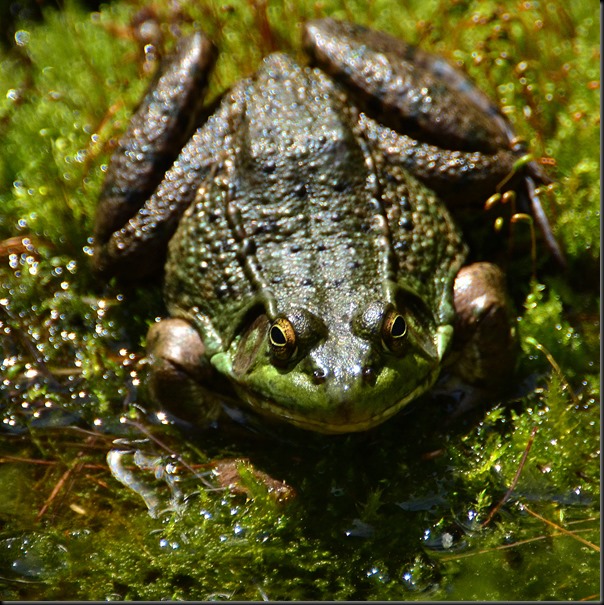 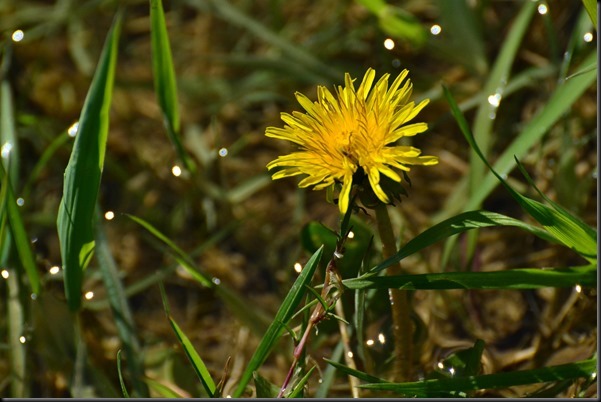 Birds in the trees frogs in the pond

Me on my knees putting flowers in the ground 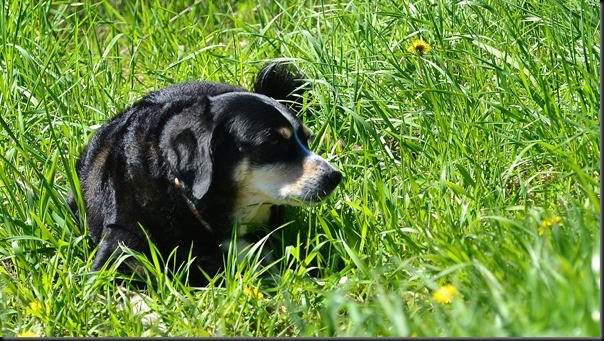 GROANER’S CORNER:((  Two guys from Blount County are sittin' in a boat on Douglas Lake fishing and suckin' down beer when all of a sudden Bill says, "I think I'm going to divorce my wife - she hasn't spoken to me in over 6 months." Earl sips his beer and says, "You better think it over - women like that are hard to find."

My kids love going to the Web, and they keep track of their passwords by writing them on Post-it notes. I noticed their Disney password was "MickeyMinnieGoofyPluto," and asked why it was so long. "Because," my son explained, "they say it has to have at least four characters."

St. Peter and Satan were having an argument one day about baseball. Satan proposed a game to be played on neutral grounds between a select team from the heavenly host and his own hand-picked boys.  "Very well," said the gatekeeper of Heaven. "But you realize, I hope, that we've got all the good players and the best coaches."  "I know, and that's all right," Satan answered unperturbed. "We've got all the umpires."