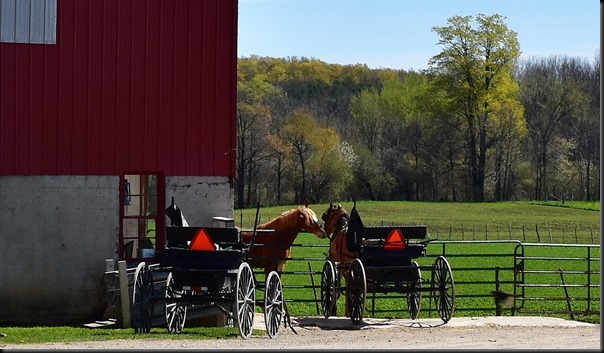 IT MUST BE SPRING:))

I think one of the most difficult things of being a daily blogger is not falling into the routine of starting one’s post each day basically the same way it was started off the day before and the day before and the day before that.  I have a habit of starting my posts with  the weather and I find it hard to get away from that at times.  Another pitfall I tumble into is the use of the same words and phrases many days and it’s a real challenge to come up with a different way of writing and finding new words or ideas to describe things rather than the same old-same old.  Well there now I’ve started my post off with something other than a weather report for a change.  Hey did I mention we had clear blue skies, warmer temperatures, a light wind and no rain today.  Oooops!! 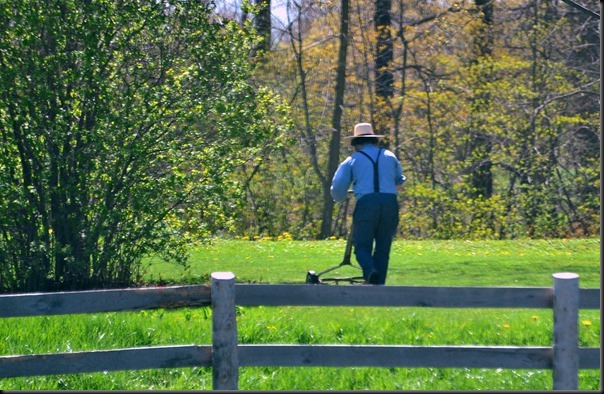 IT’S ALWAYS SUCH A RELAXING TREAT DRIVING THROUGH THE COUNTRYSIDE 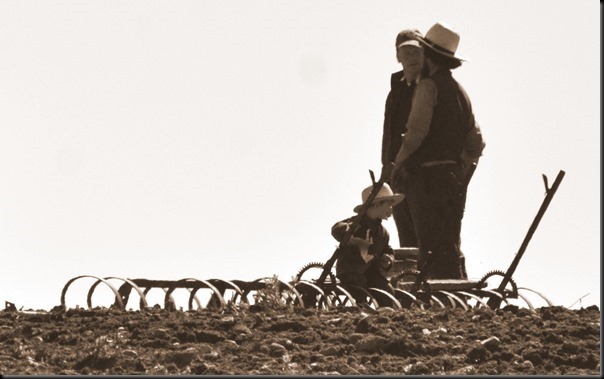 Another challenge for a daily Blogger is keeping things fresh and again that is a real challenge when one isn’t doing a whole heck of a lot each day.  Not as big a problem when traveling of course but for we Snow Birds the 6 month period at home pushes one’s creativity to the limit.  What to write about, what to write about.  There are several solutions to this of course with the main one being simply not to blog every day.  Scale it back to maybe a couple times a week.  Problem solved, right??  Well maybe for some but it doesn’t work for me that way.  When each day is over it is really over for me and to come back 3 days later with my challenged memory trying desperately to catch up with itself I simply become too frustrated and my interest drops off.  Therefore it’s either a daily blog for me or no blog at all.  The other little problem I have is that I enjoy writing and taking photos and I’m not at the point yet where I’m ready to let those two connected hobbies of mine wander away on me.  Some folks exercise their minds with crossword puzzles, card playing, computer games and so on but for me it’s writing and finding photos each day.    So a daily blog it is and I thank everyone for persevering each day through my repetitious attempts at trying to come up with different ways to keep my blog alive and semi-interesting.  It may not work as well for you as it does me but as long as it keeps the spider webs out of my mind I’ll keep plugging away at it.

CAN YOU FIND THE TWO SMALL CHILDREN….I DIDN’T KNOW THEY WERE THERE UNTIL I EDITED THE PHOTO TONIGHT 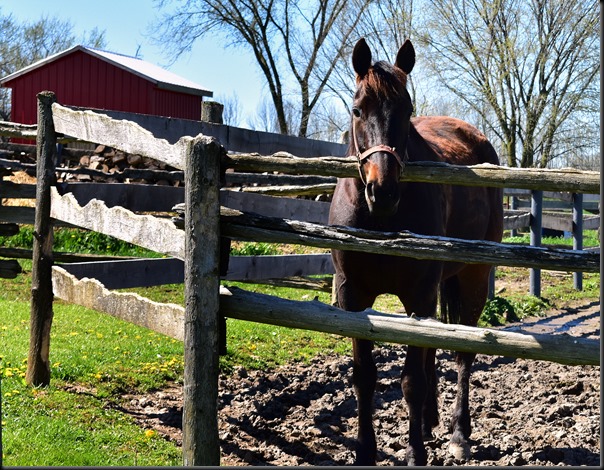 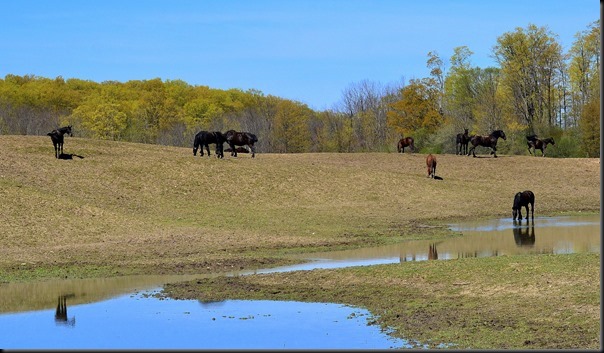 Carolyn from NW Texas recently asked in a comment, ‘If this is your rainy season when is the dry season’?  Unlike the southern and especially southwestern States we do not really have a wet or dry season here where we live in southern Ontario Canada.  We are pretty well evenly spaced out year round when it comes to wet and dry through all our 4 ever changing seasons.  Guess that’s why we have so many trees and stuff up our way:)) 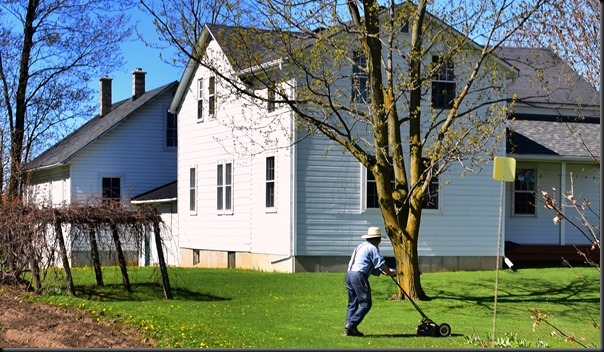 A CROPPED VERSION OF THE FIRST PHOTO 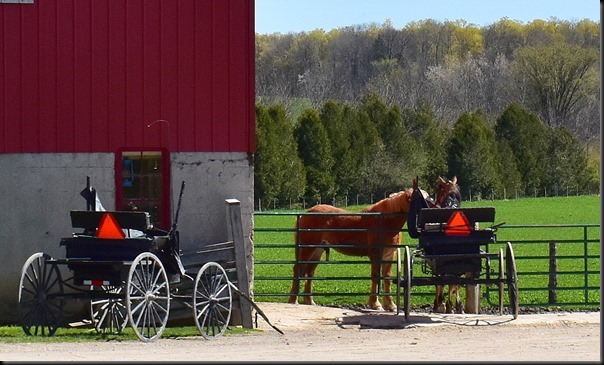 What a pleasant difference a few degrees rise in temperature makes.  Under windless sunny skies and slightly warmer temperatures today Pheebs and I had ourselves a great Jeep drive up through Mennonite-Amish country this morning.  Lots of folks out busily working away on their properties.  So nice to see the their neat yards with all their flowers.  Fruit trees are in blossom and the countryside just looks marvelous. 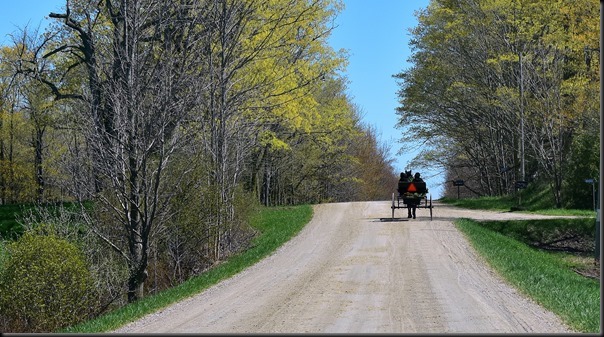 PICKING UP THE MAIL 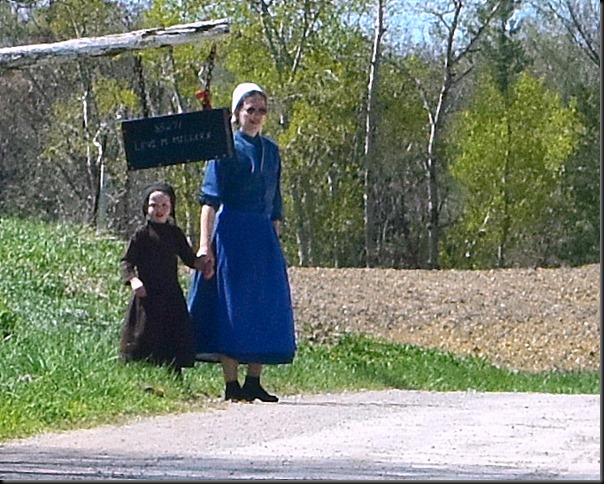 Our Jeep ride lasted nearly four hours and we enjoyed every mile of It.   Actually nice enough this morning for us to drive along slow with both front windows down and I couldn’t help but notice how much better I felt compared to the last couple mornings when the gusting icy winds made getting out of the Jeep a miserable thing to do.  That good feeling stuck with me all the way home and how nice to see the land springing to life.  With leaves quickly unfurling our forests are ablaze with wondrous Spring color. 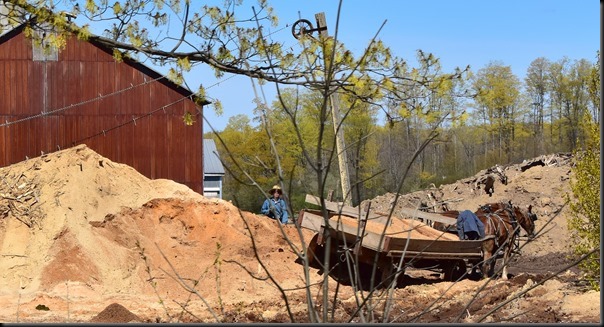 ONE OF HALF A DOZEN MENNONITE SAWMILLS IN THE AREA 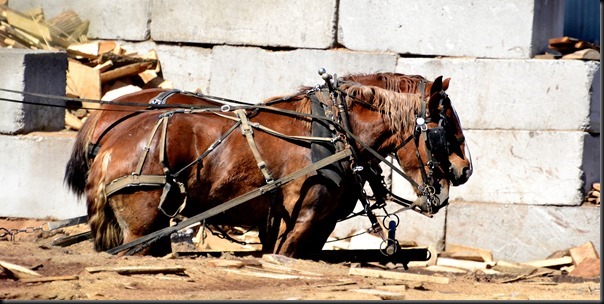 AND THIS IS ANOTHER ONE ABOUT A MILE WEST OF ST. HELENS 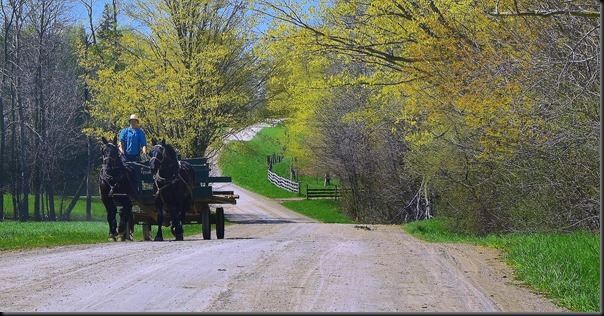 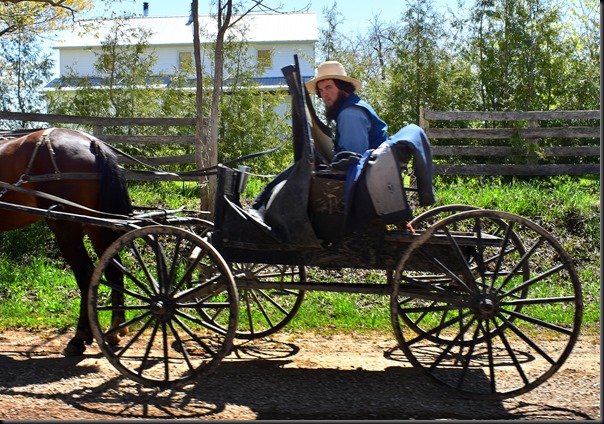 Even after we arrived home I was still energized by the day’s sunshine and warmer temps so outside I stayed and busied myself with some of my projects.  Pulled a bunch of weeds in the flower beds then put down a thick layer of pine needles.  Next came a healthy helping of cedar mulch on top of the pine mulch so I’m hoping that will be enough to keep the weeds down.  Luckily living in a pine forest we have an endless supply of pine needles which are all free for the taking. 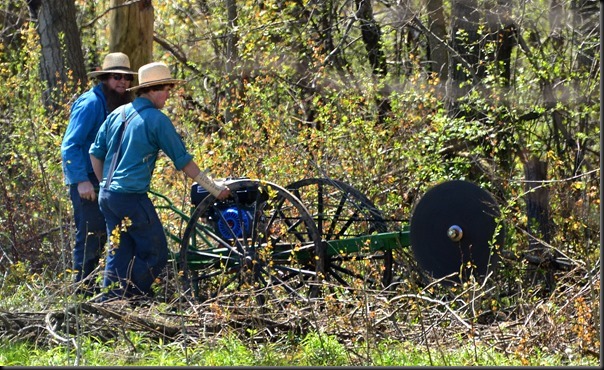 GROANER’S CORNER:((  A political candidate stood on a platform and announced to the assembled crowd that he was going to fight radicalism, socialism, communism, and anarchism.  One old man snorted and said, "I'll vote for you when you can do something about rheumatism."

“Now that looks like a happily married couple,” remarked the husband.
“Don’t be too sure, dear,' began the wife. 'They're probably saying the same thing about us.”

A lawyer named Impos Syble was shopping for a tombstone. After he had made his selection, the stonecutter asked him what inscription he would like on it.  "Here lies an honest man and a lawyer," responded the lawyer.  "Sorry, but I can't do that," replied the stonecutter. "In this state, it's against the law to bury two people in the same grave. However, I could put `here lies an honest lawyer'."  "But that won't let people know who it is!" protested the lawyer.  "Sure it will," retorted the stonecutter. "People will read it and exclaim, "That's impossible!"