Skies partially cleared Sunday night with sunlight peering through our pine trees from the west.  Had my fingers crossed for clear skies Monday morning but it was not to be as more rain, thunder and lightning cropped up over night leaving us Monday morning with a solemn cloud cover.  However not wanting to sit in the house I gathered up my cameras and the Pheebs and off we went.  At least it wasn’t raining.

NOTICED A LOT OF SHEEP IN FARMER’S FIELDS THIS MORNING 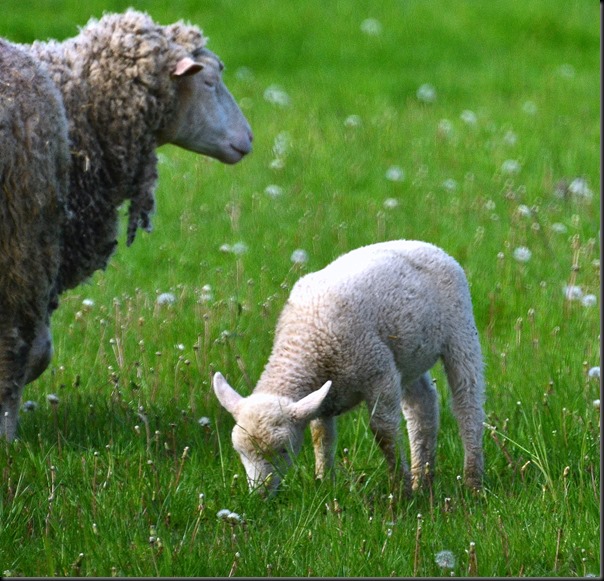 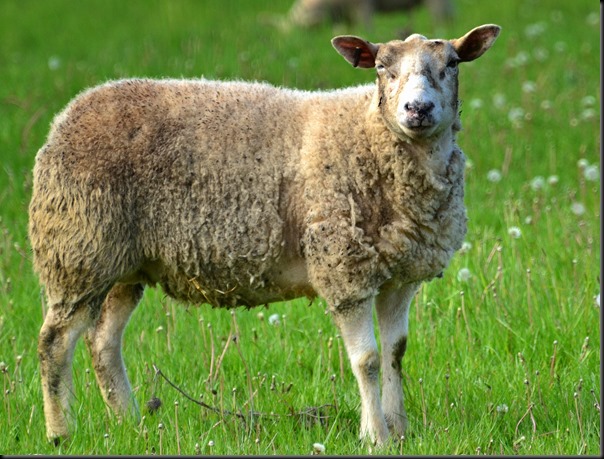 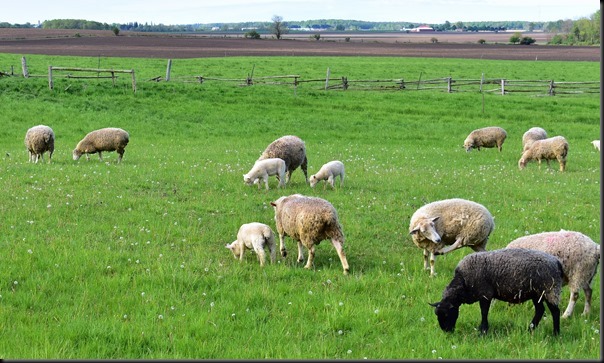 YEP THERE’S THE PROVERBIAL BLACK SHEEP OF THE FAMILY ALRIGHT 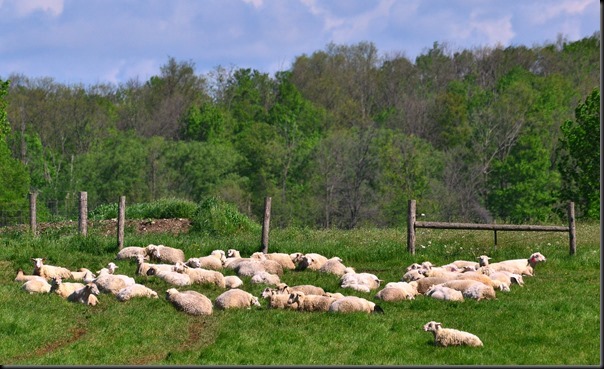 IT WAS A LAZY MONDAY MORNING IN SHEEPSVILLE

Back to my winter attire again with a T-shirt, long sleeve flannel shirt and winter jacket we headed east picking up a coffee and muffin at Hortons in Clinton.  Heading further east I saw blue skies in my rear view mirror and before long we were driving in glorious sunshine.  Stopped and took my winter jacket off and with the heater on half I rolled up my sleeves and wound the passenger side window down for Pheebs.  Turned south and wondered along Huron Counties country roads snapping a few photos along the way.  Turning right on a westerly heading I right away noticed dark clouds out over the lake.  Our warm sunshine was soon gone and winds picked up.  Stopping for a leg stretch I was quickly back into my winter jacket with the windows rolled up and some additional heat on heading home.  Early afternoon skies once again cleared and we finished off the day under clear blue warming skies:))

SO MANY NICE HOMES IN THE COUNTRYSIDE

AND MORE AND MORE BIG HOMES BEING BUILT ALL THE TIME

Now for my ‘OMG’ moment………OMG by the way means ‘Oh My Gosh’.  I have waffled back and forth the last few days trying to decide whether to tell you about my ‘OMG’ moment but in the end figured I couldn't sit on my excitement any longer.  Plus in this world of so many bad happenings and depressing news stories I decided to share a little something positive that happened to me this week.  I received an email from a long time blog reader Wednesday night.  Here in part is what that email said::  “Al -  I have two Nikkor DX lenses [AF-S Nikkor 18-105mm f/3.5-5.6G ED VR; and AF-S DX Nikkor 55-300mm f/4.5-5.6G ED VR] and Nikon DX camera [D-7200] and a small Sony Rx100v4 which I do not use and am ready to ship to you.”……. Confused, I read the email over very carefully about 3 times and still had a hard time believing what I was reading and yet something told me this was not a scam and as it turned out……it wasn’t.  Even though I tried to keep a lid on my excitement you can imagine how bubbly I felt inside as I right away went to the internet to check out all this fine camera equipment.   The more I read the more I bubbled.

In the morning I had Kelly read the email over just in case had I missed or misinterpreted something.  (I do have a habit of doing that) Nope, Kelly came to the same conclusion I did.  Everything looked like it was on the up and up.  With my shaky ‘OMG’ fingers I immediately emailed the email sender back and sure enough they emailed me in return asking for an address to ship the camera equipment to.  This person lives in the States and as luck would have it Kelly is heading down to Spencerport NY early this coming week to visit her Mother for awhile so we decided to have the camera gear shipped there.  Early Thursday afternoon I received another email saying the parcel had been shipped to Kelly’s Mom’s place in Spencerport by Fed-Ex.  Kelly quickly called her Mother to let her know a Fed-Ex driver would be bringing a 15 pound package.  Well as it turns out the Fed-Ex driver had already been there with the package but Kelly’s Mother not expecting anything missed the driver.  A neighbor noticed the Fed-Ex note on the door and brought it in.  Kelly quickly got in touch with Fed-Ex to see if the driver could re-deliver the package but being an old part time Purolator driver many years ago I knew that was unlikely to happen and it didn’t.  The parcel was re-scheduled to be back on the Fed-Ex truck for a Monday delivery. 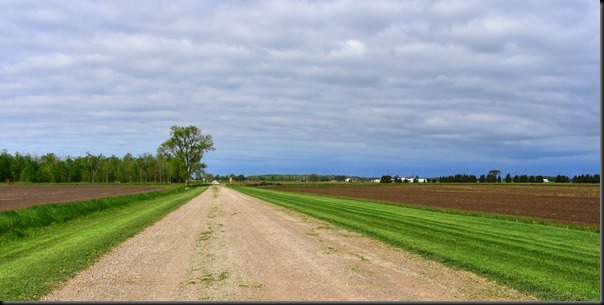 ON MANY COUNTRY ROADS EVEN THE DITCHES ARE MOWED

This kind person has requested anonymity and I will honor and respect that.  I can tell you it is someone I have never met and someone who I have never heard from before.  I am already counting the days to when Kelly returns from Spencerport with all the ‘mint condition’ camera gear.  And she hasn’t even left Bayfield yet.  In this day and age with so much depressing news coming at us daily Isn't it nice to hear a genuinely uplifting and positive story for a change and how the thoughtful kind consideration of a stranger affected someone else and in my case cranked up my excitement level to the bubbling point.  Yes Toto ‘there still are’ good people out there…….Update::  The camera gear was safely delivered to Kelly’s Mother’s house at 1:52 this afternoon:)))))) 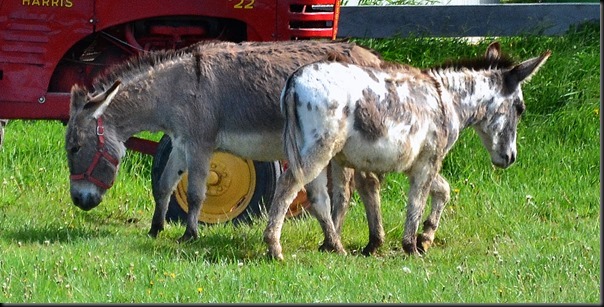 GROANER’S CORNER:((  Tom is applying for a job as a signalman for the local railroad and is told to meet the inspector at the signal box.  The inspector decides to give Tom a pop quiz, asking: "What would you do if you realized that two trains were heading towards each other on the same track?"  Tom says: "I would switch one train to another track."  "What if the lever broke?" asks the inspector.  "Then I'd run down to the tracks and use the manual lever down there," answers Tom.  "What if that had been struck by lightning?" challenges the inspector.  "Then," Tom continued, "I'd run back up here and use the phone to call the next signal box."  "What if the phone was busy?"  "In that case," Tom argued, "I'd run to the street level and use the public phone near the station."  "What if that had been vandalized?"  "Oh well," said Tom, "in that case I would run into town and get my Uncle Leo.  This puzzled the inspector, so he asked "Why would you do that?"  "Because he's never seen a train crash."

A young woman, pursuing a graduate degree in art history, was going to Italy to study the country's greatest works of art. Since there was no one to look after her grandmother while she was away, she took the old lady with her. At the Sistine Chapel in the Vatican, she pointed to the painting on the ceiling. 'Grandma, it took Michelangelo a full four years to get that ceiling painted.' 'Oh my, 'the grandmother says. 'He and I must have the same landlord.'