A MUFFIN FOR BRUNCH, A PANINI FOR LUNCH, AN OMELET FOR SUPPER AND RHUBARB PIE FOR AN UPPER…..WELL HEY WHAT ELSE COULD I RHYME WITH SUPPER 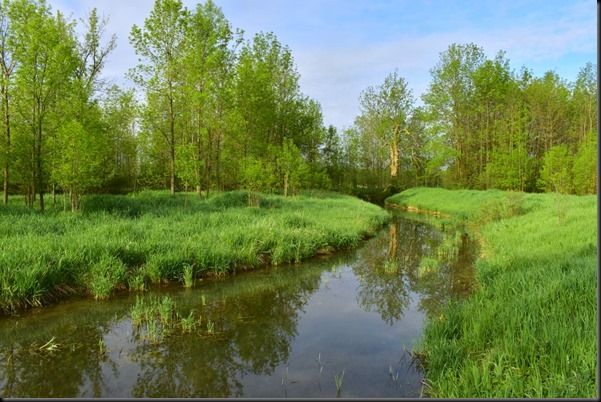 THE HULLETT MARSH IN ALL HER FINE EARLY MORNING GREENERY

It wasn’t even 7:30 yet when Pheebs and I rolled out this morning.  Early morning air was cool so we had the Jeep’s heater on for awhile.  Our wanderings headed us east through Clinton over to the Hullett Marsh where we had ourselves a wee walk.  The countryside once again seemed so peaceful and being a Sunday morning there was barely a vehicle on the road and all farm machinery I saw was parked.  We just rolled along slow taking in all the scenery.  Farmer’s fields with their neat planting rows this time of year have a calmness about them with many showing early signs of already greening sprouts.  Less than a month from now they will be cutting hay already. 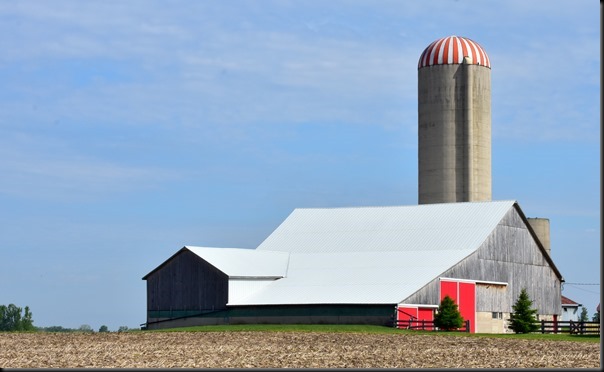 A FEW BARNS ALONG THE WAY 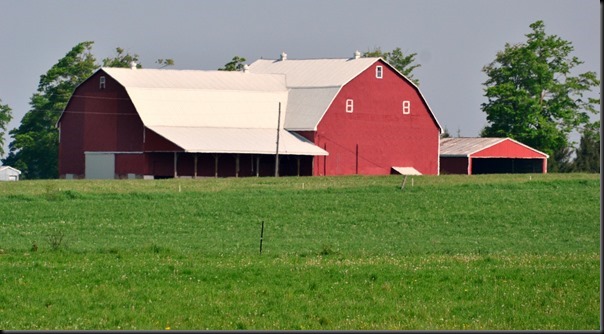 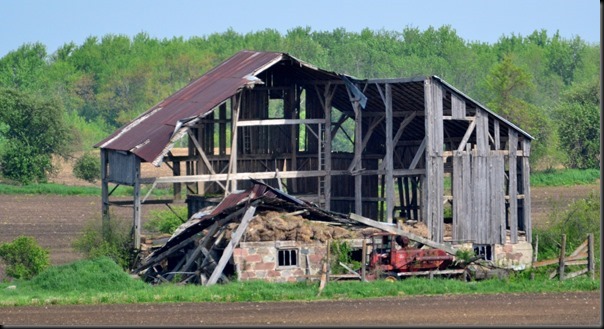 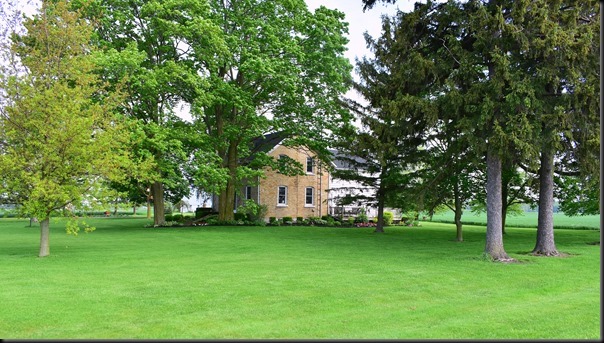 I have too many photos all in a row here so I sat for awhile trying to think of something to write about and break up the long photo line but couldn’t think of anything to write……hey wait a minute. 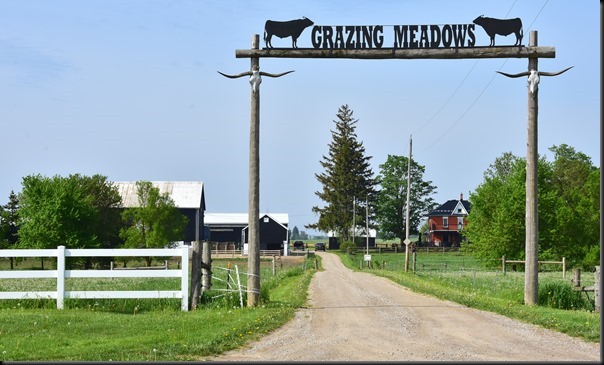 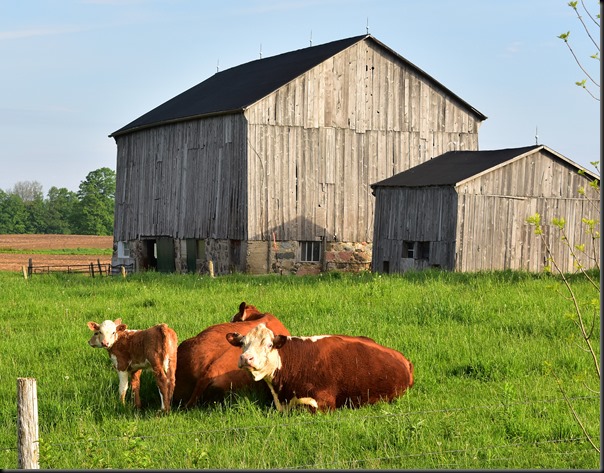 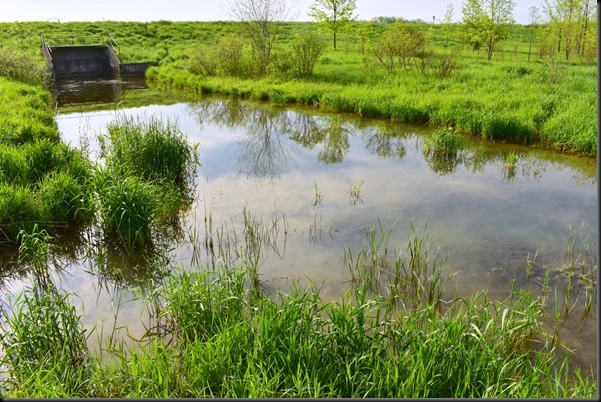 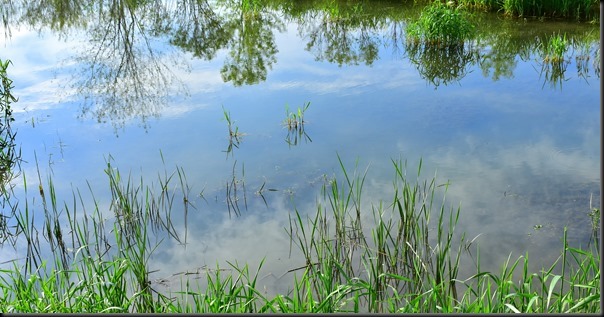 MORNING’S SUN IN A CREEK 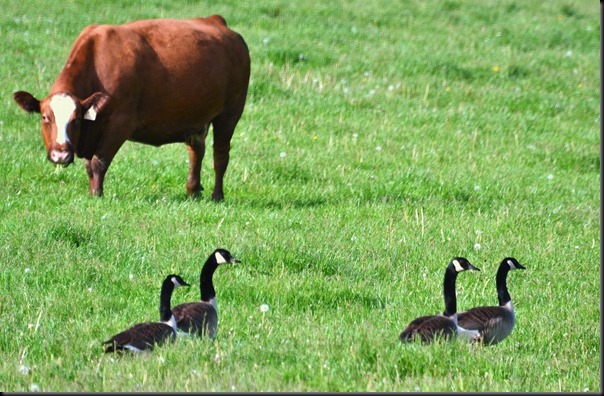 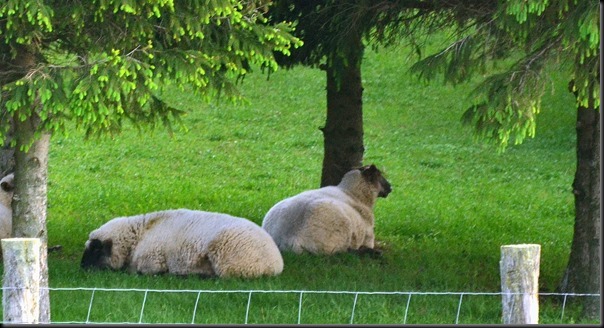 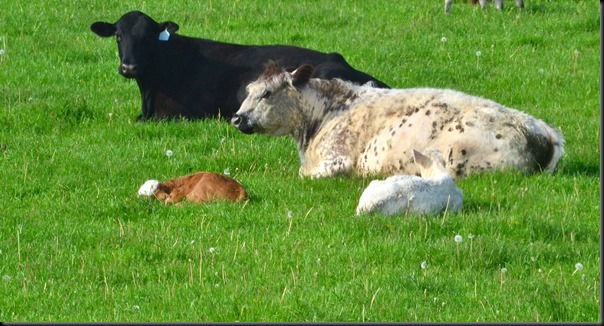 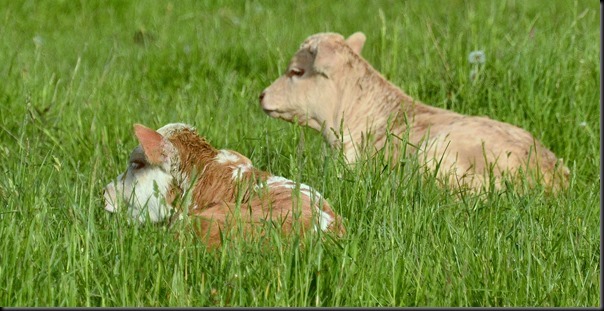 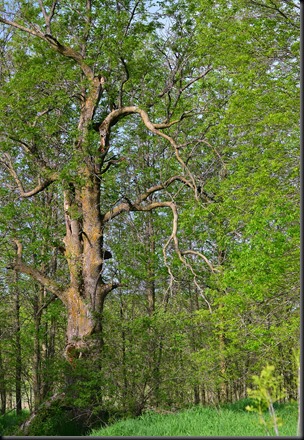 Kelly had given me a Subway coupon for a Panini so with that in mind we slowly made our way north from the Dublin area to Wingham Ontario where we sometimes pop in for a Tuna Sub at Subway.  With our chicken Panini in hand we headed west out of Wingham a couple miles to a quiet spot, pulled over and ate our still warm Panini.  It was Okay but I think I’ll stick with our Tuna Subs next time.  I had asked for honey mustard sauce and with my soft spoken voice I think the lady only heard mustard and proceeded to dump a whole boat load of mustard on the Panini.  Not one to complain I didn’t say anything and we made do with our strongly mustard flavored lunch. 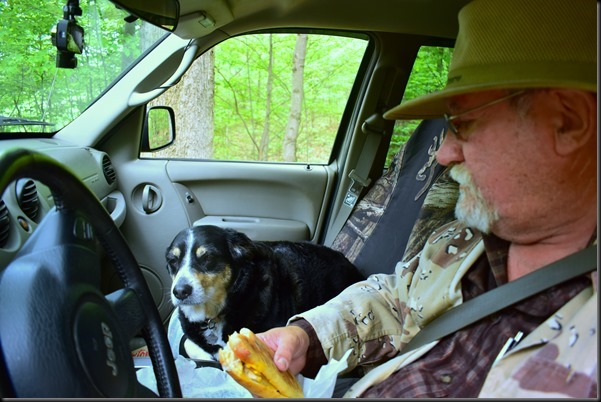 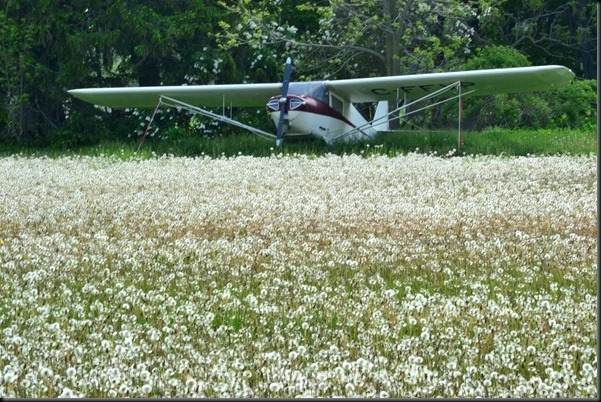 THOUGHT THIS WAS A CLEVER  LOGO ON THIS BARN….HAS KIND OF A 3 DIMENSIONAL LOOK TO IT 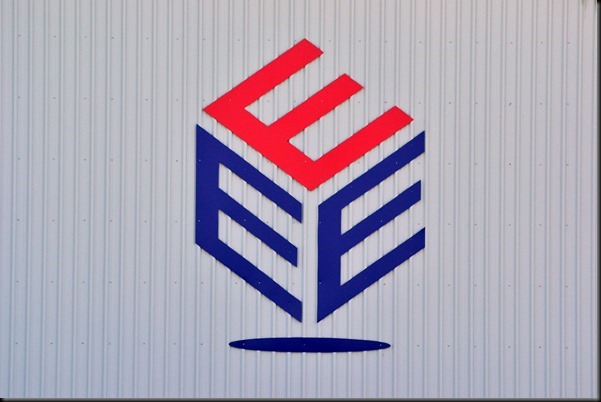 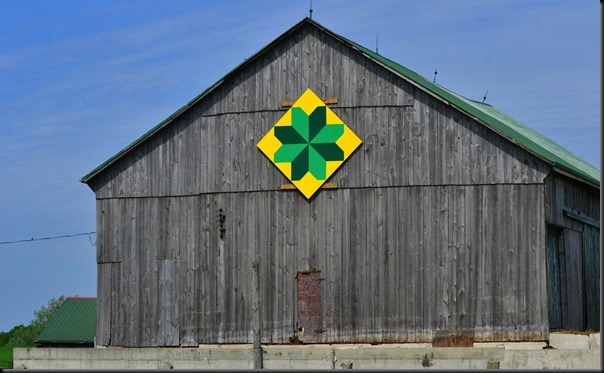 AND ANOTHER BARN BLOCK QUILT

THOUGHT THIS FELLOW HAD KIND OF A NICE COUNTRY CAMP SITE

From Wingham we set a slow course for home taking our time and snapping a few photos along the way.  Temperatures came up as the day became sunnier so it was off with the jacket and down with the windows.  A couple leg stretches along the way and we were home shortly before noon.  Think that might have been our longest morning outing since returning home early last March. 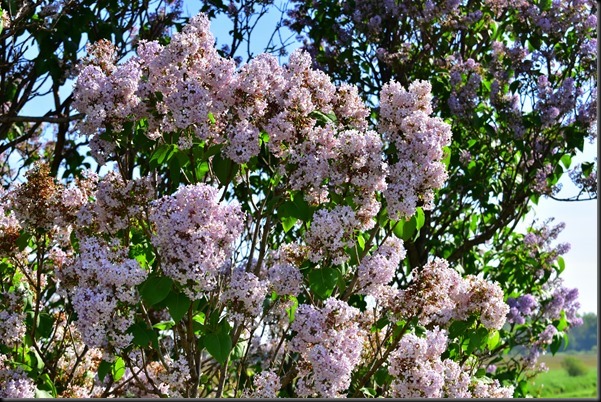 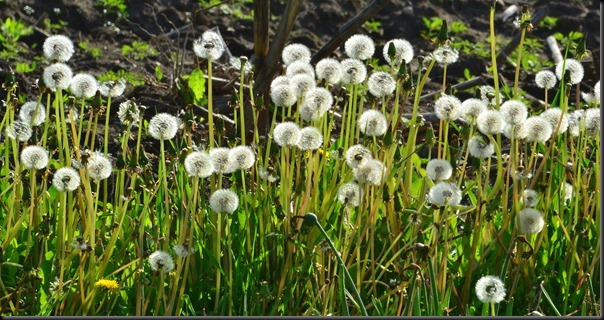 WILD PHLOX ALONG THE ROADSIDE 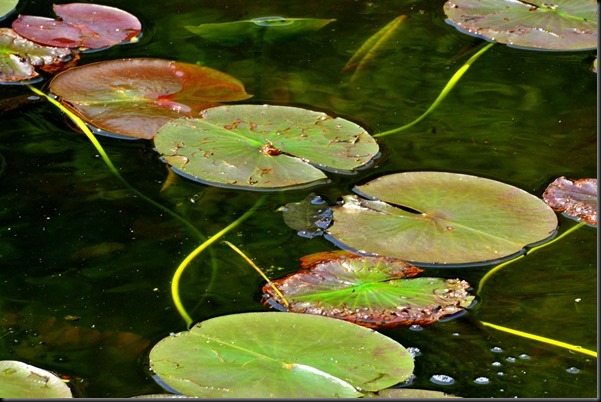 LILY PADS IN A POND

Our afternoon was quiet as both Pheebs and I lazed around not doing too much of anything.  Windows and doors open with fans going but no need to kick on the A/C.  My kind of weather day.  Whooped us up another 3 egg omelet which was supposed to be with cheese, ham, and onions but I forgot the cheese.  Chased that down with a peanut bu…….hey wait minute no we didn’t.  It was a yummy piece of rhubarb pie we had.  No I didn’t bake any pies today.  Caron from Travels With CC And Dixie had thoughtfully brought me over a piece of rhubarb pie around suppertime:)) 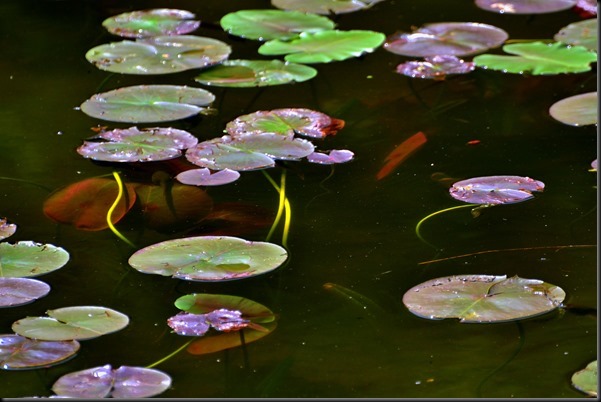 GROANER’S CORNER:((  A fire started on some grasslands near a farm. The county fire department was called to put out the fire. The fire was more than the county fire department could handle. Someone suggested that a nearby volunteer bunch be called. Despite some doubt that the volunteer outfit would be of any assistance, the call was made. The volunteers arrived in a dilapidated old fire truck. They rumbled straight towards the fire, drove right into the middle of the flames and stopped! The firemen jumped off the truck and frantically started spraying water in all directions. Soon they had snuffed out the center of the fire, breaking the blaze into two easily-controlled parts. Watching all this, the farmer was so impressed with the volunteer fire department's work and was so grateful that his farm had been spared, that right there on the spot he presented the volunteers with a check for $1,000. A local news reporter asked the volunteer fire captain what the department planned to do with the funds. "That ought to be obvious," he responded, wiping ashes off his coat. "The first thing we're gonna do is get the brakes fixed on our fire truck!"

A minister was pulled over for speeding. As the cop was about to write the ticket, the minister said to him, “Blessed are the merciful for they shall obtain mercy.”The cop handed the minister the ticket and said, “Go thou and sin no more.”