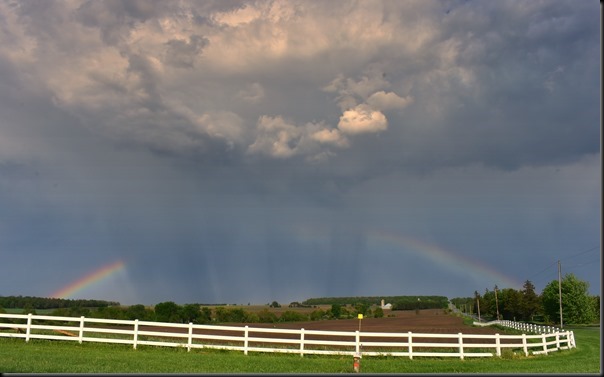 I had a set of photos to go with tonight’s post but late this afternoon a fast moving storm roared in across the lake.  I didn’t get over to the lake fast enough to catch the incoming storm but I did manage to catch the tail end of it heading inland so photos tonight are from that storm.  Again it was hard for me to pick a few of the better shots so I have included all of the pics I took.  I will post today’s earlier photos Tuesday. 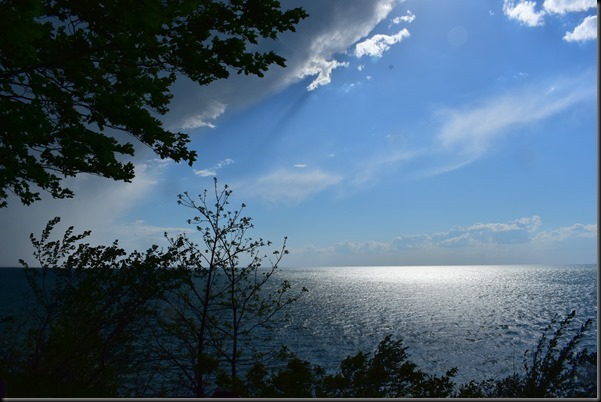 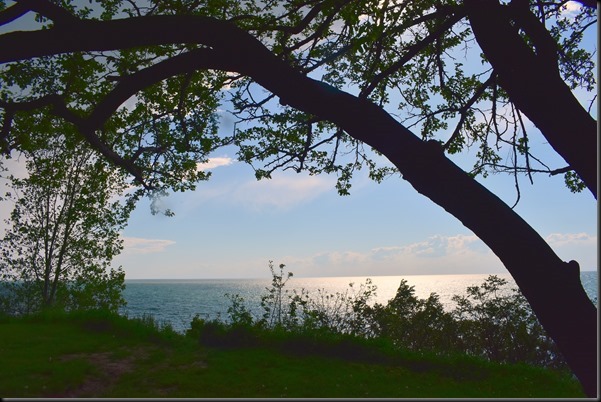 WHILE TAKING THESE PHOTOS I WAS CONTINUALLY BEING RAINED UPON

With temperatures hitting 70+ today it turned out to be a 2 shower day for me.  Now had I not decided to tackle the patio stone project I could probably have gotten away with just my morning shower but with the sun beating down and me scrambling around on the ground in the dirt I was back in the shower by 2 in the afternoon again.  It has always amazed me that no matter how hot and sweaty with muscles and bones aching all over the place it can always be made better by having a long hot shower.  Warm water running over one’s body is so therapeutic both mentally and physically. 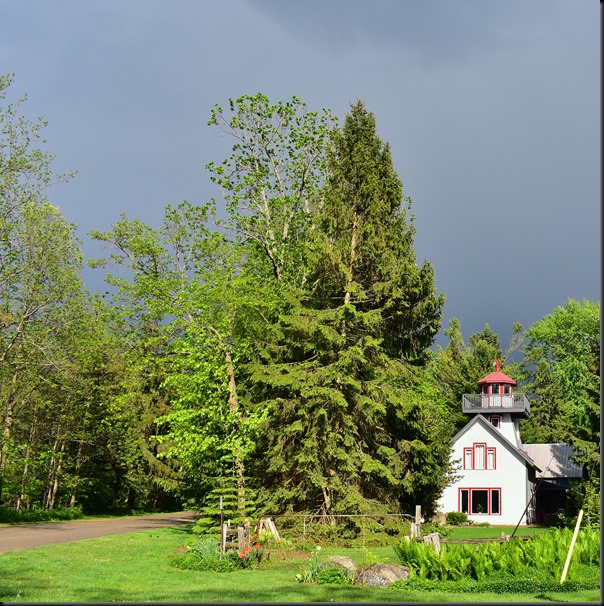 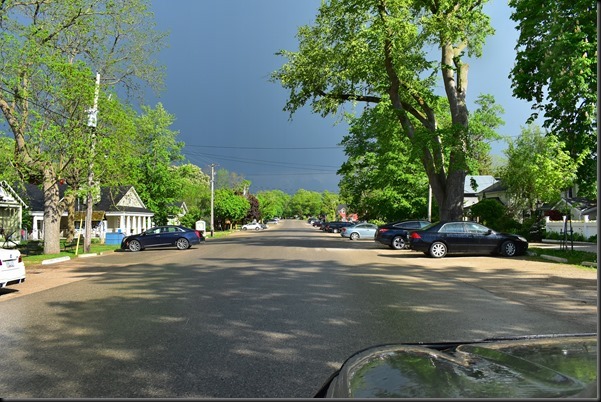 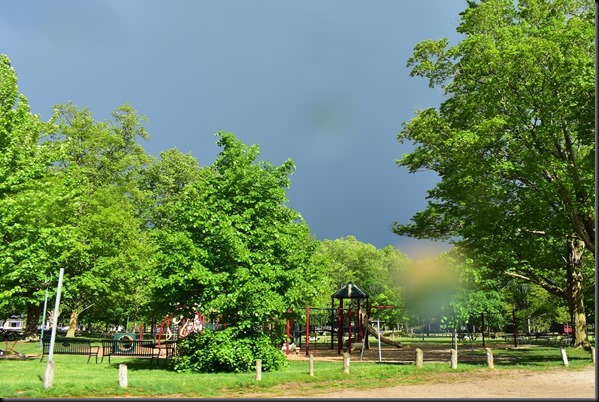 IN THESE TWO PHOTOS RAINDROPS CAN BE SEEN ON MY LENS

With rain showers rumbling around the area Sunday night I was surprised to see sunshine first thing this morning.  Figured that was as good an excuse as any to head off to the lake and so it was off to the lake we went.  We only live about a mile or so inland from Lake Huron but needing a few things at Walmart we headed off to the Goderich beach. 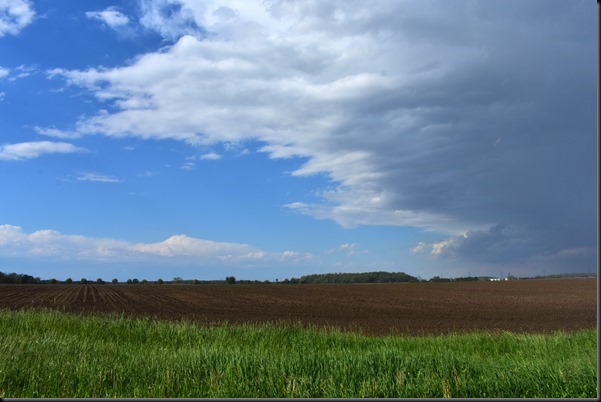 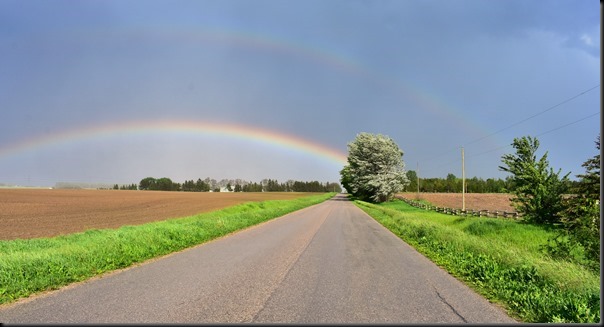 AND SURE ENOUGH THERE WAS THE RAINOW IN THE EAST 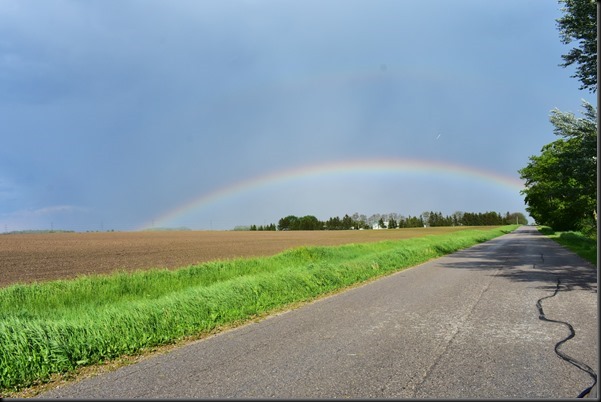 Luckily there was nobody at the doggy walking area so Pheebs and I headed off along the southerly path along the lake.  The Great Lakes are high again this year and I’m sure there are probably some cottage owners with shoreline concerns. 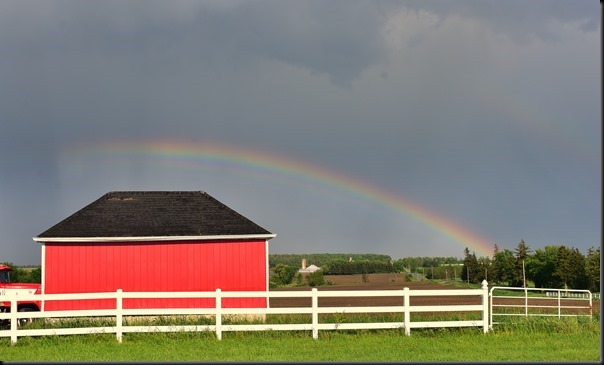 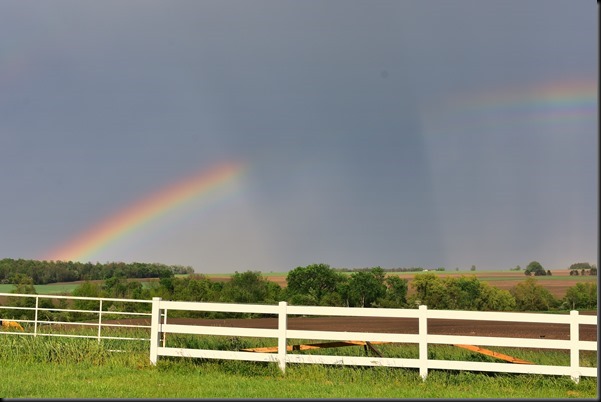 NOTICE IN THESE TWO PHOTOS AND THE LEAD PHOTO HOW HEAVY RAIN IS OBLITERATING PARTS OF THE RAINBOW….I HAD NEVER SEEN THAT BEFORE 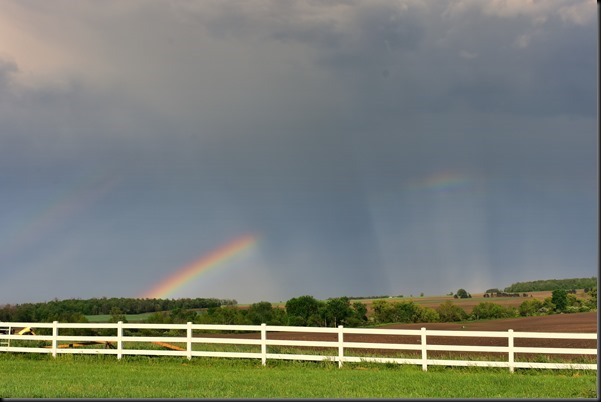 Picked up a Shasta Daisy and another Clematis plant at Walmart’s garden center.  Also in my cart this morning were some bananas, one can of chicken soup and two cans of cream corn.  We were home by 10:30 and had a sausage for lunch followed by a peanut butter and honey sandwich.   Boy oh boy we sure do eat good here. 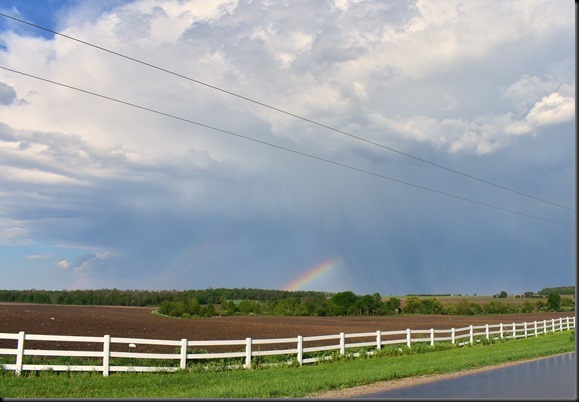 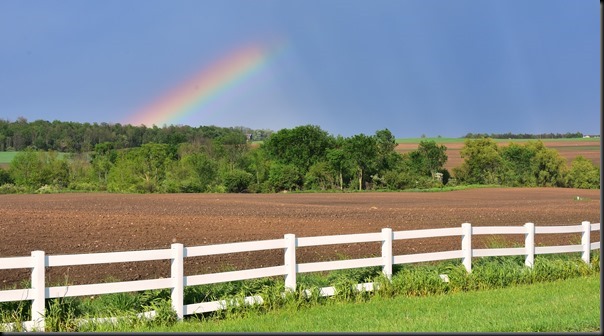 If I thought crawling around on one’s hands and knees laying heavy patio stones was a hard job 50 years ago but I sure had no idea then what it would be like doing it now at over 70.  Half a century ago if getting up off the ground was a non event then now at this stage of life it has turned into the main event.  It’s a good thing we have a private back yard because it’s quite a performance I have to go through to get myself back up on my feet.  I try to keep a lid on the oomphs and groans in order not to frighten any passers-by on the the road out front. 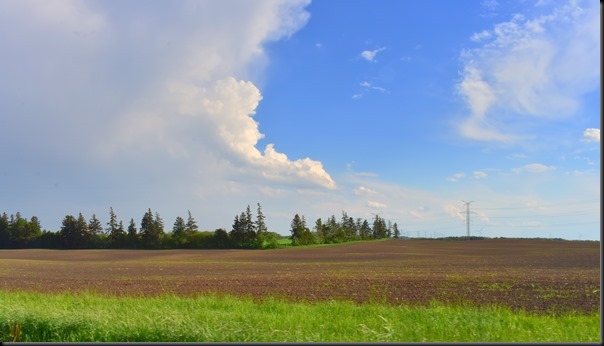 THE STORMS TAIL END MOVING INLAND FROM RIGHT TO LEFT

For supper tonight I ovenated 6 breaded chicken strips and with my favorite veggy I had myself a big mess of cream corn and chicken.  I’d say I really know how to do this cooking stuff right.  For dessert I wrapped my face around half a dozen big spoonful's of Activia Vanilla yogurt.  I like most of the berry flavored yogurts too but vanilla’s my fav.  Especially when one adds a generous splash of maple syrup and a few healthy banana slices. 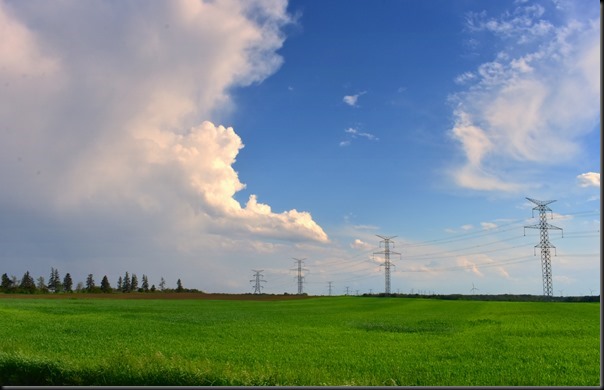 Over the past week I’ve had a couple photos of colorful quilt blocks on area barns.  Up until a few months ago I had hardly ever heard or seen a barn quilt block but they seem to be popping up more and more throughout the countryside.  Here’s a link Kelly sent me this morning about a quilt block project at the library over in Clinton Ontario.  Clinton Library Quilt Block Project 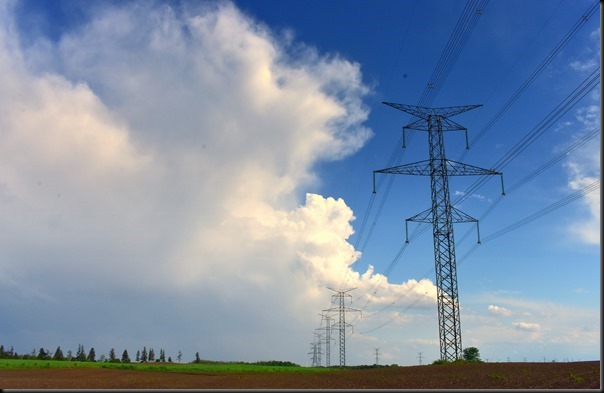 GROANER’S CORNER:(( The chief of staff of the US Air Force decided that he would personally intervene in the recruiting crisis affecting all of our armed services. He directed a nearby Air Force base that will be opened and that all eligible young men and women be invited.  As he and his staff were standing near a brand new F-15 Fighter, a pair of twin brothers who looked like they had just stepped off a Marine Corps recruiting poster walked up to them. The chief of staff walked up to them, stuck out his hand and introduced himself.
He looked at the first young man and asked, "Son, what skills can you bring to the Air Force?"
The young man looks at him and says, "I'm a pilot!"  The general gets all excited, turns to his aide and says, "Get him in today, all the paper work done, everything, do it!"  The aide hustles the young man off. The general looks at the second young man and asked, "What skills to you bring to the Air Force?"  The young man says, "I chop wood!"  "Son," the general replies, "we don't need wood choppers in the Air Force, what do you know how to do?"  "I chop wood!"
"Young man," huffs the general, "you are not listening to me, we don't need wood choppers, this is the 20th century!"  "Well," the young man says, "you hired my brother!"  "Of course we did," says the general, "he's a pilot!"  The young man rolls his eyes and says, "So what! I have to chop it before he can pile it!"