NICE TO HAVE A PAIR OF CARDINALS BACK AGAIN

Following difficulties with the last two times hooking up our heavy utility trailer I've made a change.  Instead of parking it at an odd angle in our pea stone driveway making it hard for me to physically pull it ahead and hook up I decided to park it in our carport on the concrete floor again where it is much easier for me to maneuver it.  Still  a heavy lift but shorter and I can easily move the trailer a few inches to drop the hitch over the ball.  Much easier to move on concrete as opposed to gravely pea stone and by adding a bit of weight to the back half of the trailer I can alter the balance enough not to make the tongue lighter to lift.  That should save me some sore muscles in the future.

QUITE A CAST OF CHARACTERS ON OUR BIRD STATION….1 RED WING BLACKBIRD, 1 MOURNING DOVE, 1 CRACKLE, AND 1 BLUE JAY 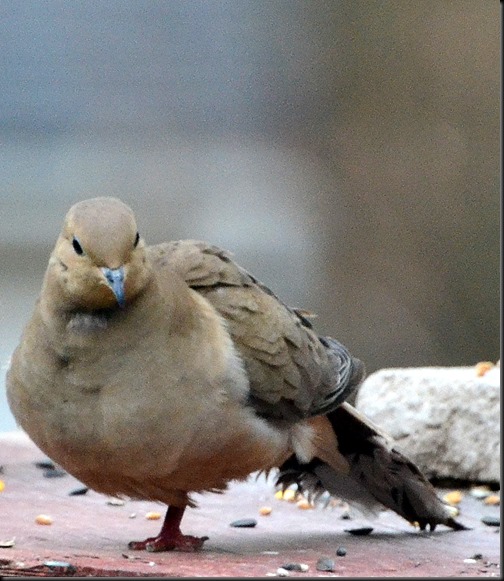 Although we dropped slightly below freezing overnight it was nice to see clear skies heralding in a new mornings sunrise.  And standing on our new deck extension Monday night it was great being able to look straight up into the night sky and see a host of brilliant twinkling stars.  In warmer weather it will be good spot to set up my 'Stellar-View Nighthawk' refractor telescope. 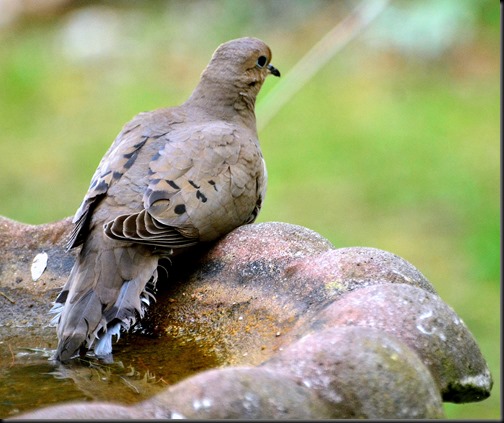 Patsy from Chillin' with Patsy asked me a few days ago about our front yard bird station where I take a lot of my bird photos.  Amazingly enough while sitting here watching a couple Blue Jays after supper tonight I actually remembered Patsy asking about it so I quickly grabbed a few photos before dark.  It’s nothing fancy that’s for sure, just a pine log dug in the ground with a round piece of plywood on top with a flat rock holding it down so it doesn’t blow off.  I used to have a roof over it to keep the seeds dry in rainy weather but a pine branch smashed it up a couple winters ago and I’ve just never got around to constructing me a new roof.  Birds don’t seem to mind that I don’t got no roof on the darn place anyway. 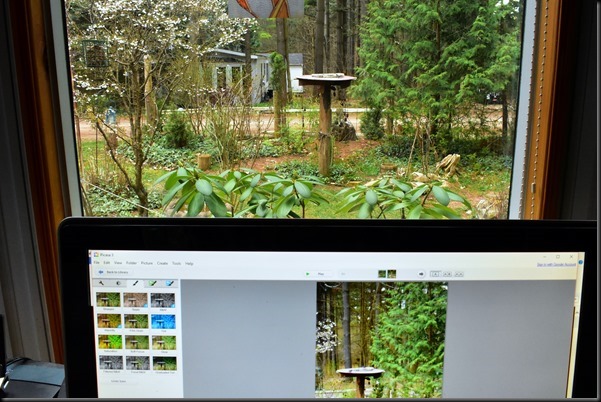 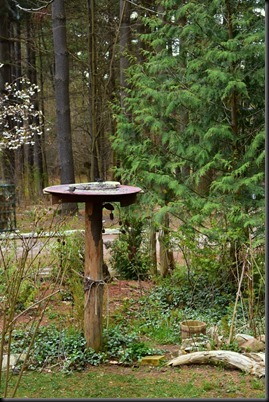 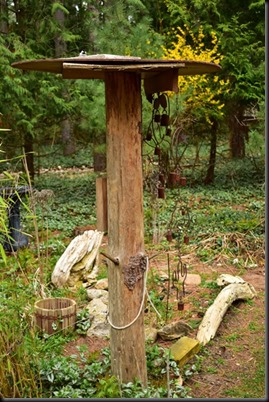 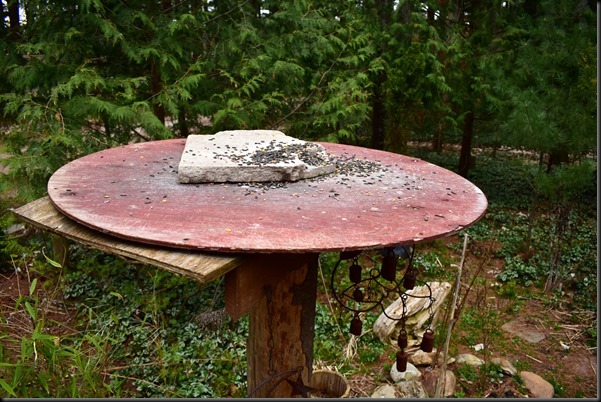 AS I SAID NOTHING TOO DANG FANCY AND THAT PIECE OF SQUARE PLYWOOD STICKING OUT UNDERNEATH IS FROM THE ORIGINAL BIRD STATION…..I JUST SET THAT ROUND PIECE ON IT WITH A ROCK ON TOP TO KEEP IT FROM BLOWING AWAY 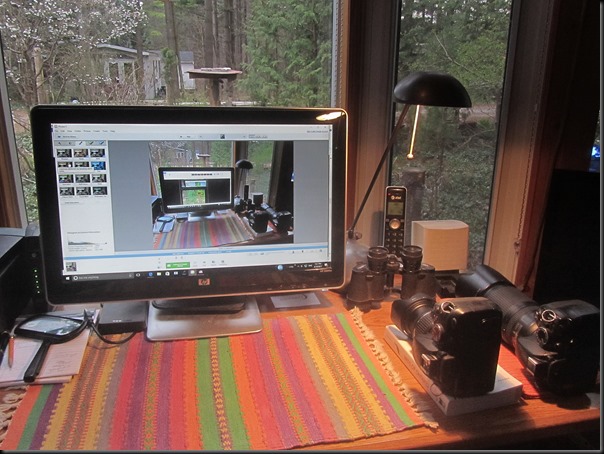 Feeling much better about things this morning as my temporarty depression seems to have lifted sometime in the night.  In my case depression isn't necessarily caused by large negative happenings such as a death in the family, a marriage breakdown or financial woes etc as it is by a series of small things building up over time like a large body of water behind a weakened dam.  Then inevitably one day the dam breaks and I get swamped.  Thanks to everyone for your concerns. 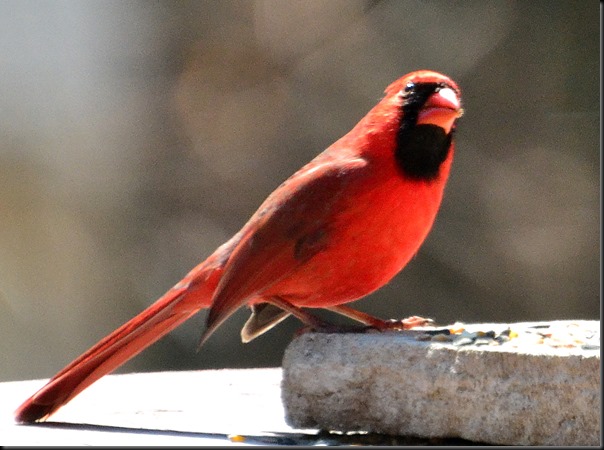 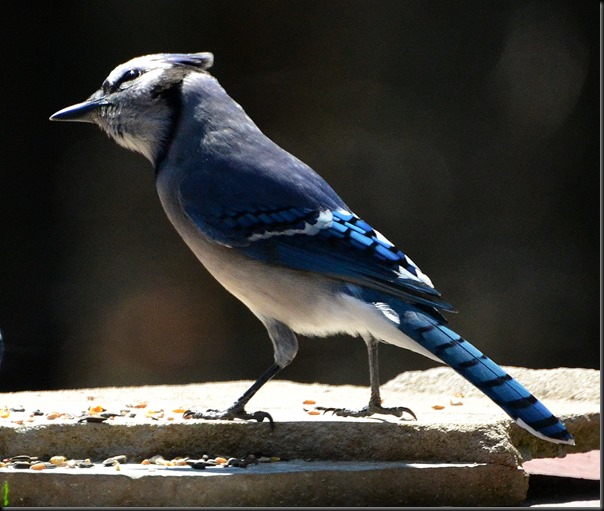 With my bout of depression lifted and a sunny day upon us I hit the ground running this morning.  Lots of things to do and projects to get caught up on.  Didn’t know I was going to start on our back yard today but start on it I did.  First thing was trimming a bunch of lower cedar branches on a cedar tree I had planted about a dozen years ago.  After that the shovel was in the ground and we were off.  Ferns and Day Lilies dug up and relocated along with mulch added to a couple flower beds, etc.  Felt good to be outside doing something constructively creative again:)) 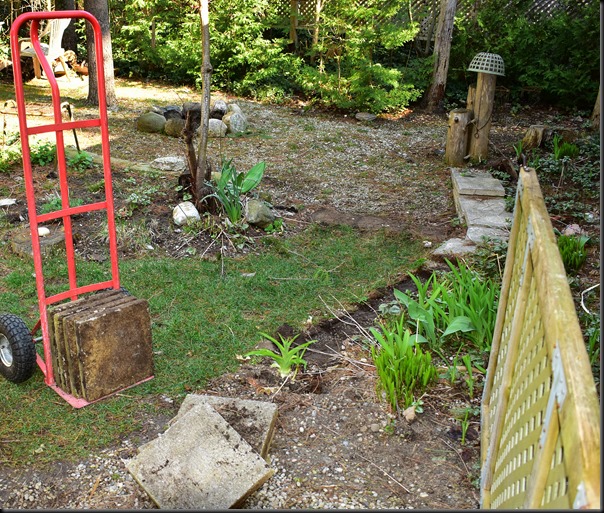 TAKING OUT A BUNCH OF PATIO STONES FOR STARTERS 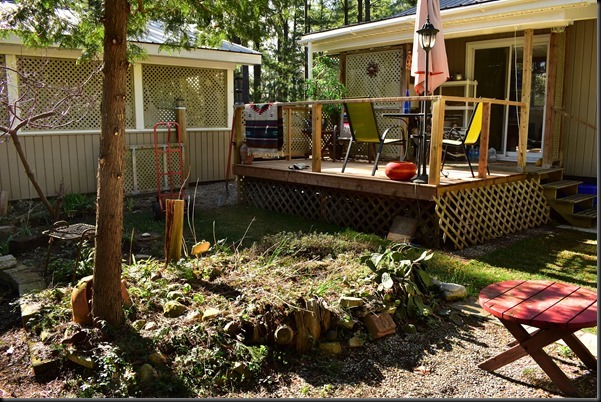 TRIMMED OFF LOWER BRANCHES ON THE CEDAR TREE TO THE LEFT 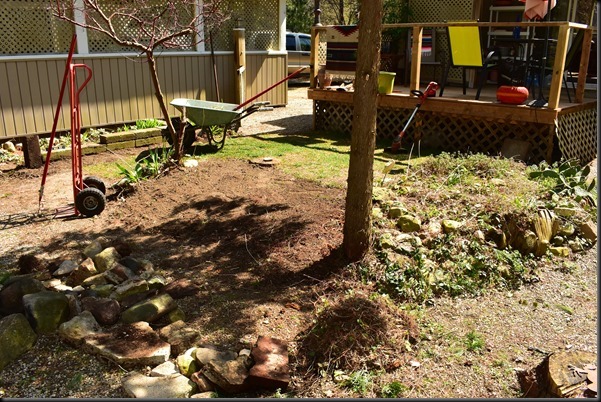 Looks like we have a couple more rainy days headed our way starting tonight so maybe Pheebs and I will have to slip out in search of some rainy day photos in the morning.  Sitting in the house doing nothing will not be an option. 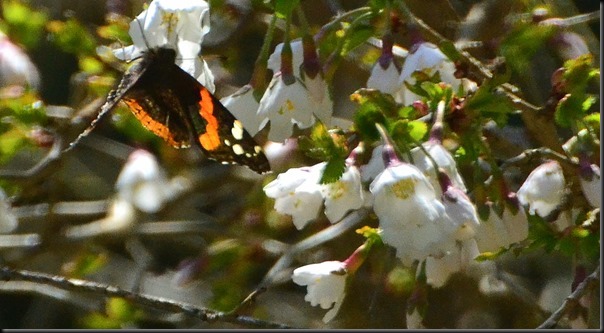 GROANER'S CORNER:(( An engineer died and ended up in Hell. He was not pleased with the level of comfort in Hell, and began to redesign and build improvements. After awhile, they had toilets that flush, air conditioning, and escalators. Everyone grew very fond of him.
One day God called to Satan to mock him, "So, how's it going down there in Hell?"  Satan replied, "Hey, things are great. We've got air conditioning and flush toilets and escalators, and there's no telling what this engineer is going to come up with next." God was surprised, "What? You've got an engineer? That's a mistake. He should never have gotten down there in the first place. Send him back up here."  "No way," replied Satan. "I like having an engineer, and I'm keeping him."  God threatened, "Send him back up here now or I'll sue!"  Satan laughed and answered, "Yeah, right. And just where are YOU going to get a lawyer?"

A tourist climbed out of his car in downtown Washington, D.C. He said to a man standing near the curb, "Listen, I'm going to be only a couple of minutes. Would you watch my car while I run into this store?"  "What?" the man huffed. "Do you realize that I am a member of the United States Senate?"  "Well no," the tourist said, "I didn't realize that. But it's all right. I'll trust you anyway."

During the American Revolution...what did you call a scared and frightened militiaman fleeing down the same road as a British Loyalist?
Chicken catch a Tory!

There was this limo driver who was in business for 25 years without a single customer.  All that time and nothing to chauffeur it.