THIS MORNING I MANAGED TO SURVIVE MY FIRST EVER COLONOSCOPY PROCEDURE:)) 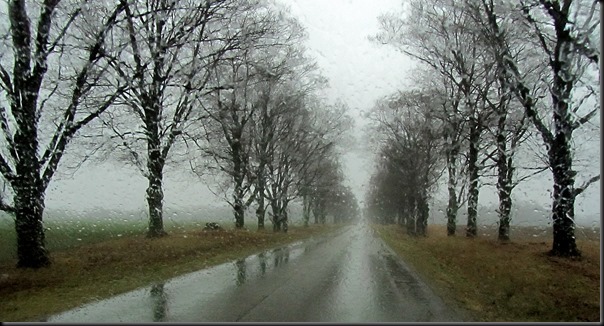 Okay so now that my first ever colonoscopy procedure is behind me what do I think??  I was told right up front the worst part of the whole ordeal was the preparation part meaning the days leading up to the actual procedure itself.  My attitude towards things like this may be a little different than most folks but I always assume and prepare myself for the worst and when things aren't as bad as I had assumed they would be I actually feel pretty good.  I'm not one to go into things thinking everything is going to be wonderfully fine and no problem.  So coming from that perspective I thought everything went really well. 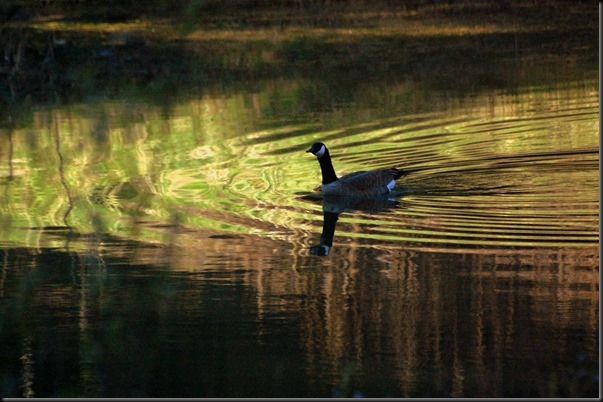 Monday was a long day with my only food intake being lime Jello, chicken broth and raisin Gatorade.  Managed to stuff myself with some water in between those things and at no time did I feel ravenously hungry enough to eat a horse.  I did go through 2 tins of chicken broth though and that kind of put me over the top.  And because I only drink maybe one full cup of coffee each day I wasn’t bothered by any caffeine withdrawals although I may have had several peanut butter spasms. 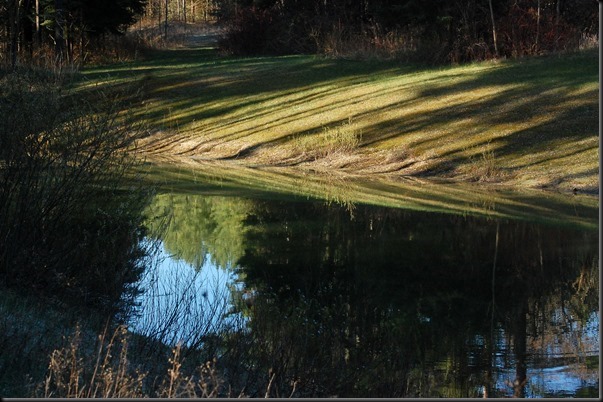 THAT GAP IN THE TREES LEADS TO NICE FORESTED WALKING TRAILS

At 5 p.m Monday afternoon I drank the first of three Purg-Odan packets to begin the process of flushing myself out.  I had heard this was pretty bad tasting stuff but it wasn’t.  It is now flavored with orange crystals and for the most part tasted much like a simple glass of orange juice.  And there was no after taste of any kind but I washed it down with a slug of raisin Gatorade anyway.  It was exactly an hour later when the effects of the Purg-Odan suddenly made itself known and I can tell ya right up front you do not want to be very far away from your very much most favoritist toilet right up to the time of the colonoscopy procedure itself.  Trust me on that one.  Took the second packet at 8 p.m Monday night and the last packet at 5 a.m. Tuesday morning. 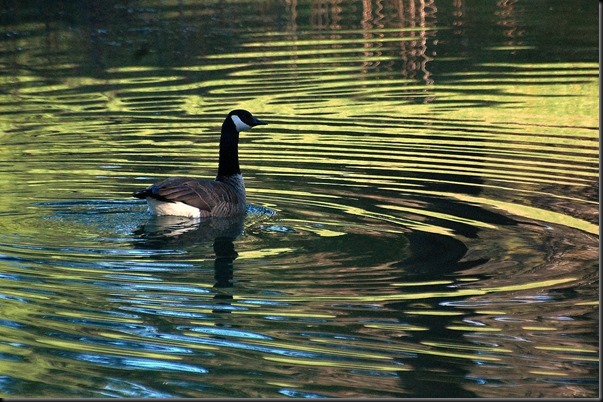 Kelly and I were at Goderich’s Alexandra Marine Hospital in good time Tuesday morning and by 9 a.m. they had me disrobed and shackled to the bed with heavy leg irons, a straight jacket, black bag over my head covered by something that felt like a football helmet.  Well Okay maybe that’s how I assumed it was going to be but here’s what it really was like. See, I was felling better already. 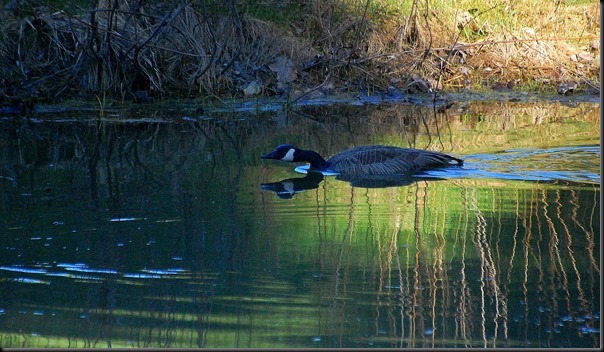 Only thing they let me keep on was my socks and of course one of those awkwardly backwards blue hospital gowns.  Laid myself down on a bed and a warm blanket was draped over my bottom half.  Good thing they didn’t put it up to my neck because I might have been a bit inclined to vent a little humor by pulling the blanket up over my head.  This could have resulted in me being wheeled to the morgue instead of the operating room.  Close call there.

Had a nice nurse person helping me with things and it wasn’t long a young anesthesiologist fellow came in and introduced himself.  He had questions for me as well and once it was determined I would be a good specimen for a colonoscopy he wished me luck.  While talking to this nice fella the nurse had slipped around to the other side of the bed and deftly slipped a very sharp needle under my skin atop my right wrist.  Through the attached IV tube is where the anesthetic chap would soon be shooting the joy juice into me.  Minutes later another nurse dressed in what look like a thin pale yellow raincoat came in and informed me I would be going with her.  Well Okay. 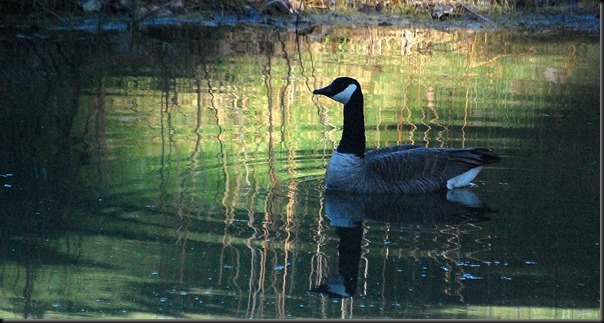 It was a short bed ride down the hall to the operating room where they wheeled me in under a barrage of bright lights.  I remembered my last time in an operating room in Stratford Ontario.  I was there to have a kidney stone laser blasted and the attendant parked me in the hall and told me to get off the bed and walk into the operating room whereupon I had to climb up on the butcher block bed all by my very self.  Well with my untied open back hospital gown blowing in the breeze it was quite a performance as I recall……:((  But back to today. 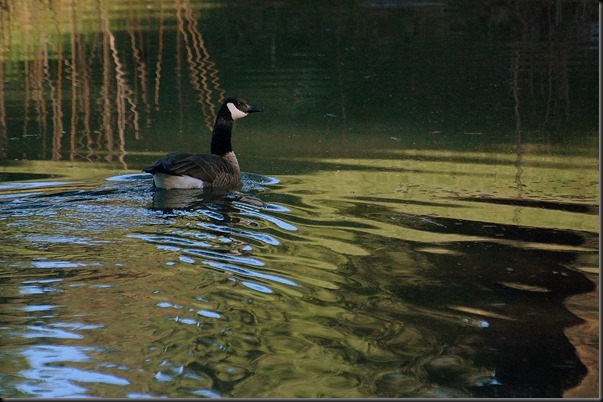 There were 2 nurses in the OR maybe three and between them they got me lined up correctly on the bed I lay upon.  Legs over here, butt over there.  Yikes who lifted up the blanket!!  The green garbed anesthesiologist fellow with what looked like a flattened Chef’s hat on with some mosquito netting mixed in busied himself in front of a monitor and another electronic device beside the bed.  The very last thing I remember is him saying ‘you might feel a slight burning sensation where the IV tube enters your wrist.  I never did feel that, in fact I never felt anything at all at anytime.  For all I know they could have taken my socks off and chased each other around the room with them. 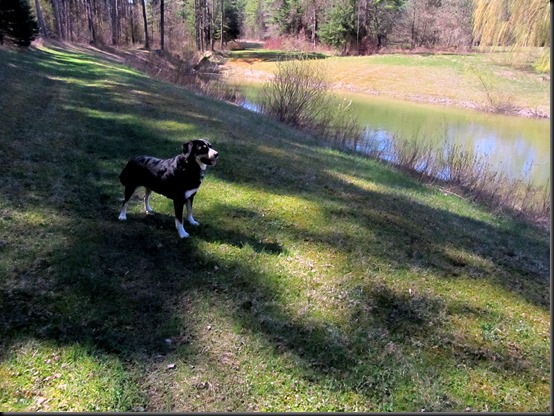 From a seemingly far away place I heard a faint voice talking to someone and the voice was familiar.  With the fog gradually clearing my mind was slowly able to identify that voice as being that of Kelly.  Eyes kind of flickered open and there she was at the foot of my bed talking to the nurse……with a big Tim Hortons coffee in her hand.  Oh so that was it eh, I didn’t make it and this is what heaven looks like eh…..or, or, maybe someplace else.  It took a few more whiffs of fog to lift before I realized I was back in the recovery room, a room I had just left minutes before right??  Wrong!!  Unbeknownst to me time had passed and my procedure was successfully long behind me. 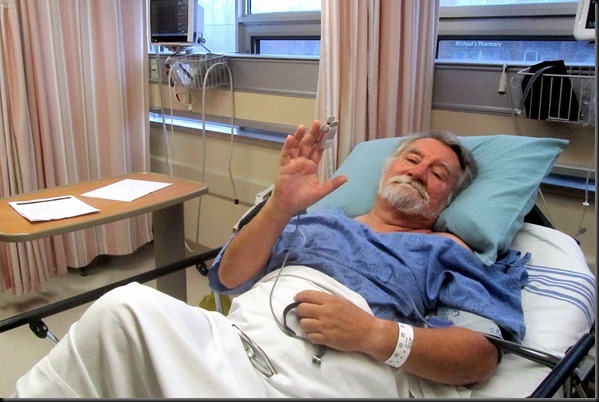 With a few good jolts of Kelly’s coffee my mind cleared quickly and a very welcome reality based sense of relief set in.  Aside from a few minor cramps I was feeling pretty darn good.  No pain or discomfort anywhere.  Nurse asked me if I would like a couple cookies.  I was tempted to say no not a couple……how’s about a dozen please.  Wasn’t long and I was on my feet and dressed.  Doctor Dalvi, who performed the colonoscopy came in to see me saying everything looked fine and that he did remove a small polyp.  I have an appointment with him in few weeks to go over any other results and findings.  I really like this Doctor who happens to be a young fellow as well.  I can’t remember where or when I crossed the line from all Doctors and medical personnel being older than me to now being younger than me.  How the heck did that happen anyway. 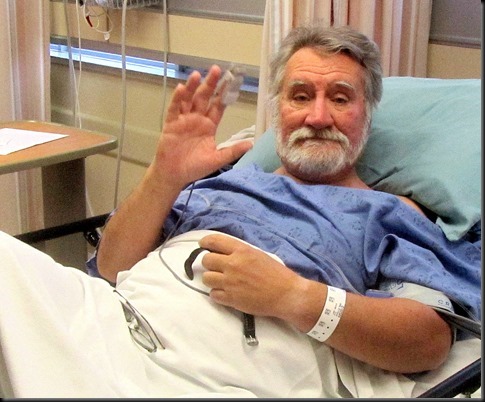 We were soon out the door of the hospital and on our way home but first a stop at A&W where they had a special on Mama Burgers.  I was needing that.  With a snack in my pocket for Pheebs we were soon back on the rainy fog shrouded highway with Kelly driving and me in the passenger seat for a change.  It was somewhere before noon we pulled into our driveway whereupon I went inside and passed copious amounts of gas until the last remaining few cramps were gone.  It’s Okay, the Nurse told me to do that.  I felt like I was back in action once again and ready to rumble.  Sore arm is feeling a tad better today too.  Now if we could just get rid of this miserable cold wet weather!!!! 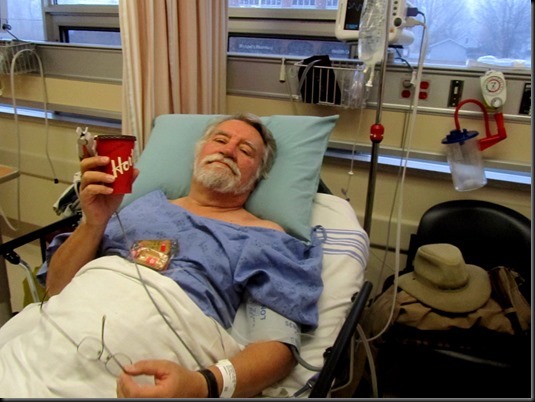 But…………..I’m not out of the ‘Doctor Appointment’ woods just yet.  In the morning I have to be at the Maitland Valley Medical Clinic for a 9 a.m. appointment with my Nurse Practitioner and next Tuesday is an 11 a.m. appointment in Clinton with my Urologist guy.  (Dr. Bukala) Up to this point so far so good:))  Oh, and I gotta drop off another bucket of blood at the Vampire Clinic tomorrow too:(( 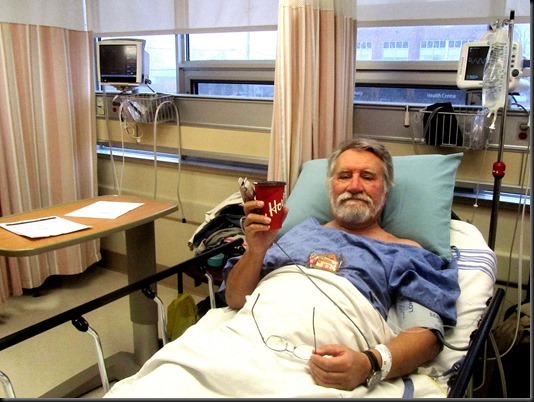 In case anyone is wondering what it was that kicked all this off and brought us back from the Southwest earlier than usual this year I can tell you it was blood in the toilet one morning early last February while we were in Borrego Springs California.  That coupled with a few other things was the catalyst that told me I had better get myself smartened up a wee bit and address a few medical issues instead of avoiding them like I usually do.  Also knowing that it might involve a number of medical appointments and possibly some procedures and treatments I wanted to get everything lined up now in the early Spring months and not in the summer or Fall when things could interfere with our Southwest travels whereupon Doctor appointments scheduled for the winter months could throw a nasty monkey wrench into our travel plans.  So that in a nutshell is why we hurried home at the beginning of March instead of the end of March……………..:)) THAT BIG RED THING IS A REFLECTION OF OUR PARK’S DUMPSTER AND DID YOU SEE THE LOW PROFILE GOOSE??

GROANER’S CORNER:(( A Few Business Mergers From The Past::

Denison Mines, and Alliance and Metal Mining merge to become Mine All Mine.

Federal Express and UPS merge to become FED UP.

Xerox and Wurlitzer will merge and begin manufacturing reproductive organs.

Officer to driver going the wrong way up a one way street. 'And where do you think you are going?' Driver: 'I'm not sure, but I must be late as everyone else is already coming back.'