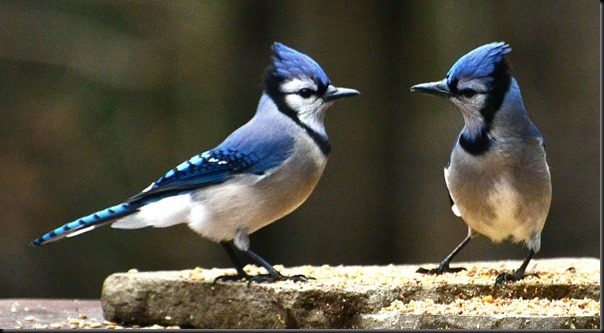 ‘OH REALLY SO THAT’S WHAT YOU THINK OF ME EH’

Rains came in the night leaving us with a cold and damp morning drizzle.  Only option I had was to get myself outside into the carport storage area and one of our sheds to continue working on my clean-up and re-organization projects.  Dressed warm I spent most of the morning puttering about with a bunch of putterable stuff.  All little things but all giving me a sense of accomplishment and on dismal dreary days a sense of accomplishment although maybe hard to come by is a welcome feeling indeed. 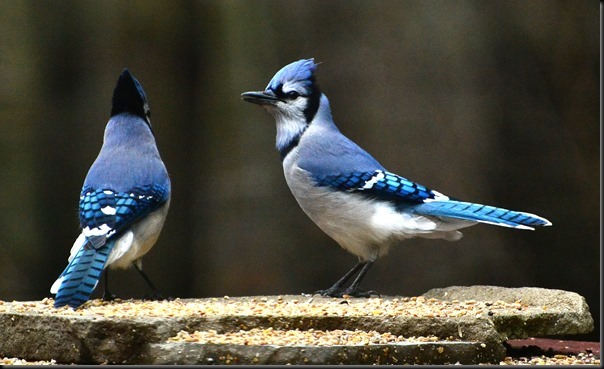 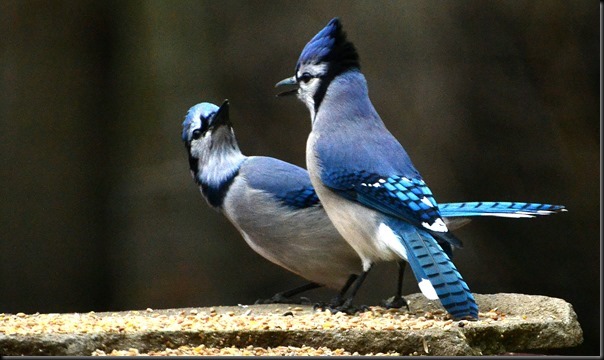 ‘WELL WHY DID YOU SAY YOU LOVED ME THEN’ 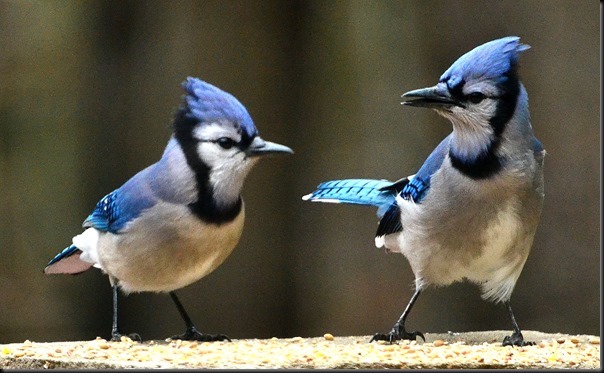 ‘I SAID NO SUCH THING’ 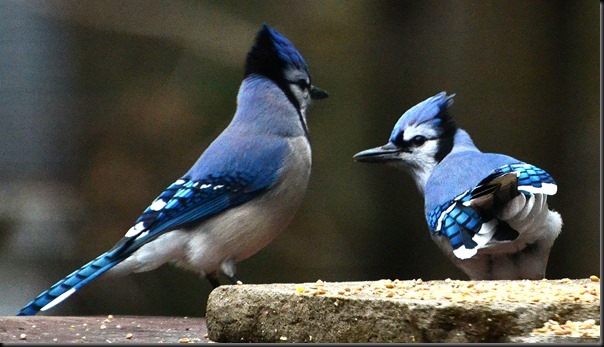 Watched with great amusement this afternoon as two Blue Jays landed on our bird station and proceeded to have quite a heated discussion between them.  A lot of squawking and jumping around but I think love triumphed in the end.

‘WELL ALRIGHT SO WHAT IF I DID SAY IT’ 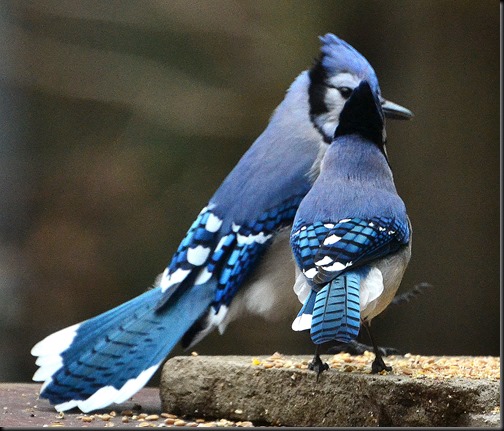 ‘WELL SAY IT AGAIN AND THIS TIME MEAN IT!! 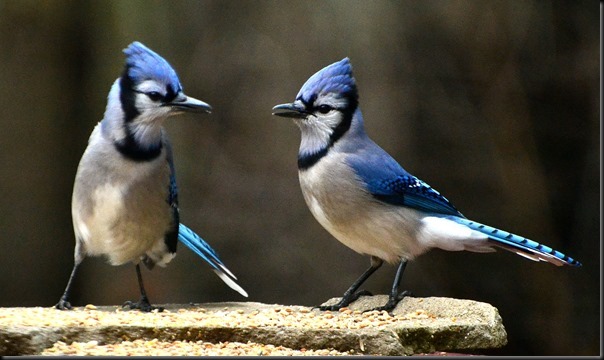 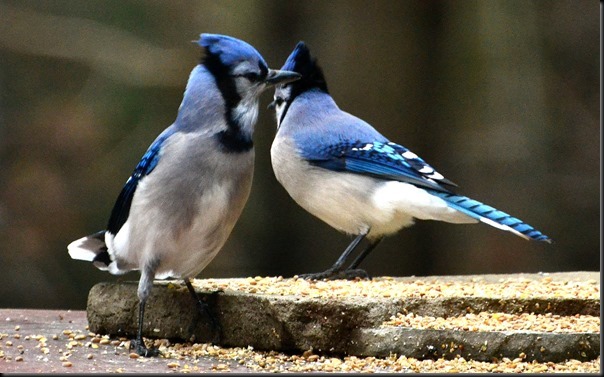 ‘I LOVE YOU DEAR’

It was one month ago today we arrived home from the Southwest and the month of March seems to have already passed quickly.  To bad the weather has been so crappy but it’s the way it is.  I guess this way we have more to look forward to when the good stuff does get here someday.

It was tempting this afternoon to haul our power washer out and get at that Motorhome but knowing my arm needs more time to heal it was quite a tussle I had going on with my younger ‘let’s do it’ self and my older ‘don’t do it Dummy’ self. 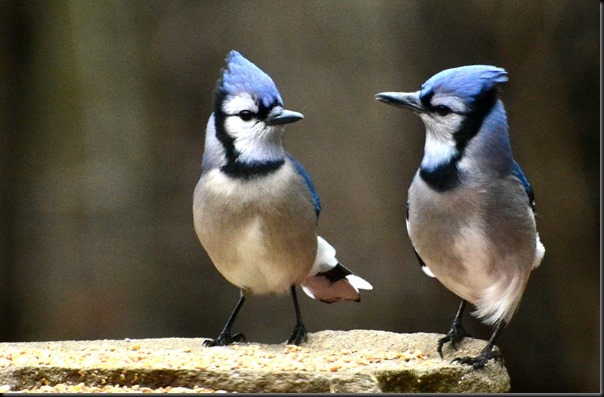 ‘ARE YOU SURE YOU REALLY MEANT IT THOUGH’ 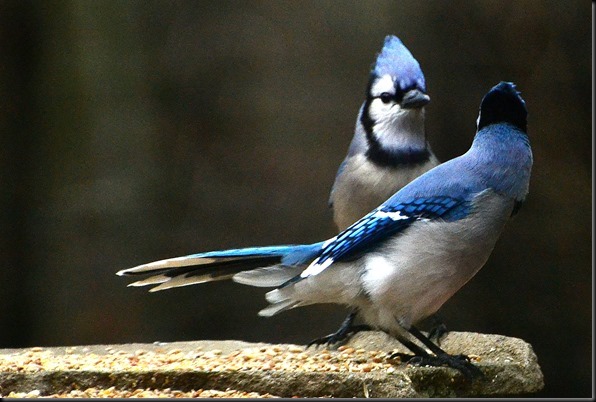 ‘OF COURSE I’M SURE DEAR’

Here’s our weather forecast for the next 12 hours or so……’Periods of rain changing to snow and local blowing snow early this evening. Snowfall amount 2 to 4 cm. Wind northeast 20 km/h gusting to 40 becoming north 60 gusting to 80 this evening. Low minus 1.  Fri, 7 Apr
Mainly cloudy with 60 percent chance of flurries early in the morning’……Awwww Nuts!!!!!!  Our snowfall actually began at exactly 5:56 p.m. & some of the snowflakes looked about as big as snowballs.  At the time of publishing tonight it was still snowing.  Kinda put me right in the Christmas Spirit it did. 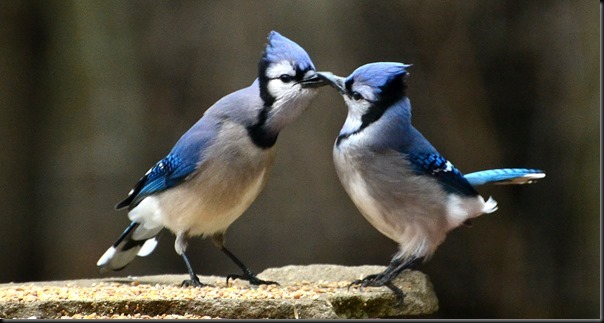 GROANER’S CORNER:(( Last week our police station was broken into and the commode was stolen from the rest room. Yesterday the police reported that the investigation is ongoing but they still have nothing to go on.

A pastor was opening his mail one morning and one envelope had only a single sheet of paper with a single word printed on it: “FOOL!”The following Sunday the priest announced, “I have known many people who have written letters and forgotten to sign their name. But this week I received a letter from someone who signed his name and had forgotten to write a letter.”

Whenever someone calls me ugly, I get super sad and hug them, because I know how tough life is for the visually impaired.