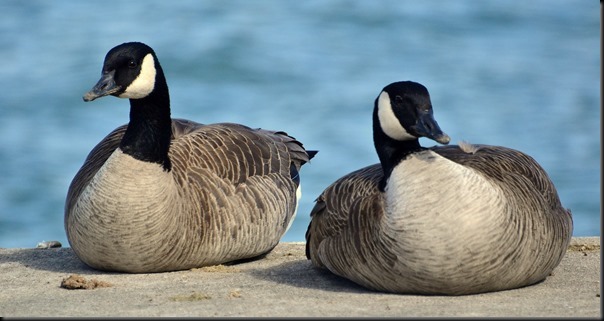 It was nearly 8 a.m. and I still had not hauled myself out of my recliner.  A thought entered my mind saying I might as well stay there, seemed like the day was already half over.  Then another thought rumbled it’s way through telling me to get up!!  So I got up!!

With sunrise spilling through our larger living room window Pheebs reminded me it looked a good morning for a Jeep ride.  After bouncing myself in and out of a nice prolonged hot shower Pheebs and I were soon on the road heading for ‘you know where’.   Long line at Clinton’s Tim Horton drive-thru window but no matter we were patient guys.  Ordered my usual carrot muffin and somehow ended up with something different.  It was a muffin of course but for the first time ever it was a muffin with a vanilla cream filling in the center.  Delicious but but oh how sticky.  Had to pull ourselves over to the side of the road for a sticky finger clean-up. 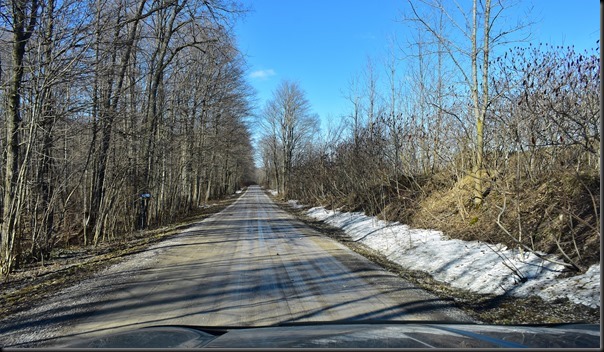 MOST OF OUR COUNTRYSIDE LOOKS LIKE THIS
A real nice looking day with sun shine, blue skies and white puffy clouds.  But ‘OMG’ the wind and what an icy wind it was too.  We stopped at one of our favorite Hullett Marsh sites and I was only out of the Jeep for maybe 2 minutes.  The wind just seemed to go right through me despite having my winter coat on.  Had it not been for the wind we would have had a totally acceptable outside day.  Winds were so strong they almost blew Pheebs fur off. 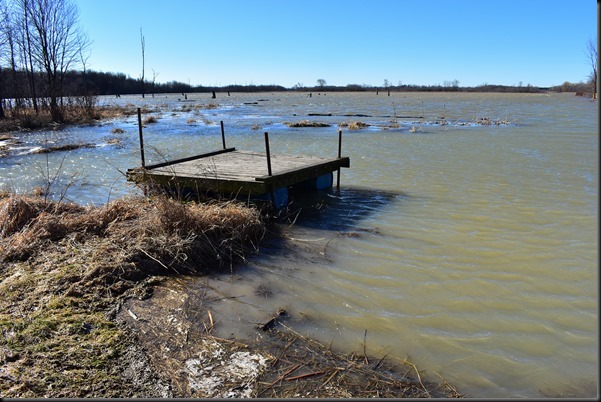 THOSE ARE LOOKING LIKE TUNDRA SWANS WAY OVER THERE 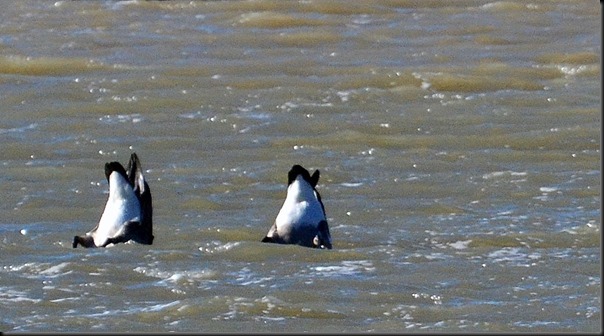 I CALL THIS PAIR A COUPLE DOUBLE DIPPERS
Twenty minutes later a couple miles north of the Marsh we came across another sign of how windy it really was.  I saw in the distance a green field with what looked like a snow bank running across the top of it.  Just didn’t look quite right and there was no snow anywhere else.  Driving closer I saw movement then wrongly guessed it was probably the largest gathering of sea gulls I had ever seen. 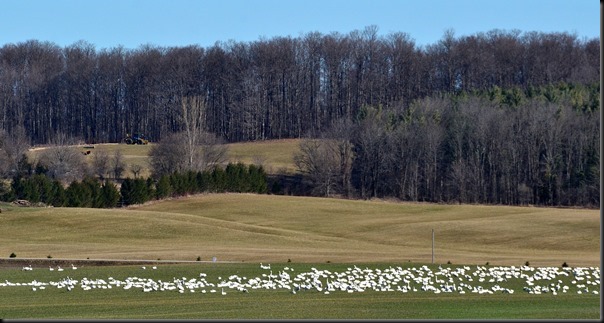 Moving slowly closer along the country road I noticed the birds were way to big to be sea gulls.  It was then I realized I had just stumbled across a large flock of Tundra Swans.  They are also known as Whistling Swans or Trumpeter Swans.  If there were 300 Swans in that field there were a thousand.  Most were on the ground and some in the air.  Stopped on the road and took a few photos. (ok quite a few photos) 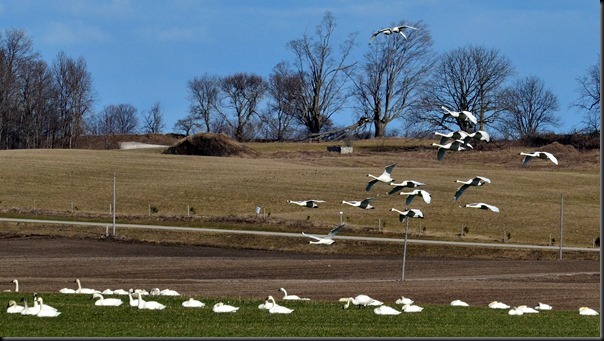 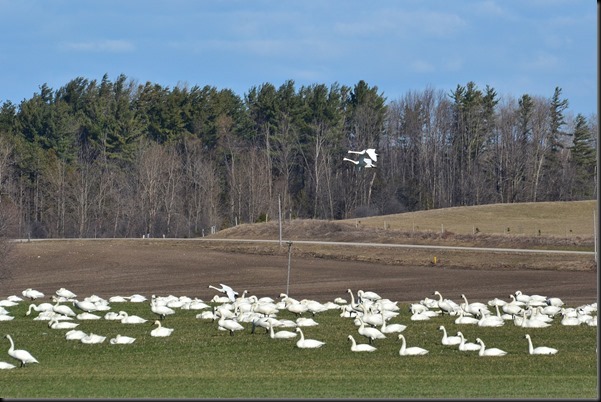 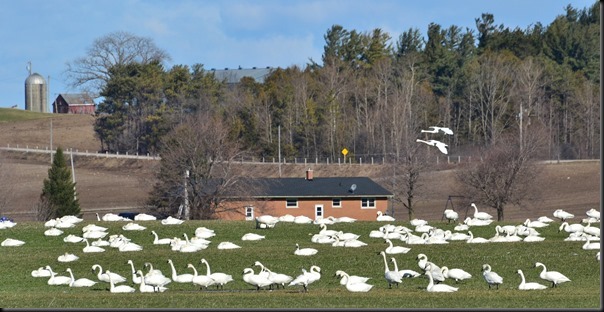 ALL TUNDRA SWANS I SAW IN THE AIR WERE IN THE PROCESS OF LANDING….NONE WERE TAKING OFF 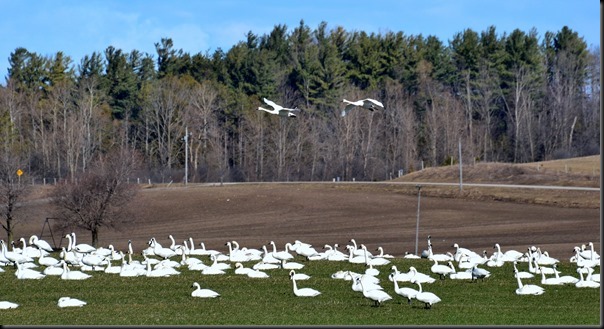 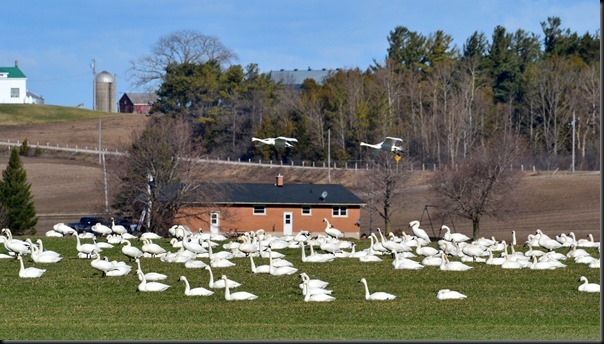 All the birds in the air were in the process of landing, and they just kept coming and coming.  Winds were so strong the big swans were almost stationary in the air as they dropped almost straight down lightly touching the ground.  I did not see any Swans taking off and quickly concluded they were all on the ground waiting for the winds to abate before moving on. 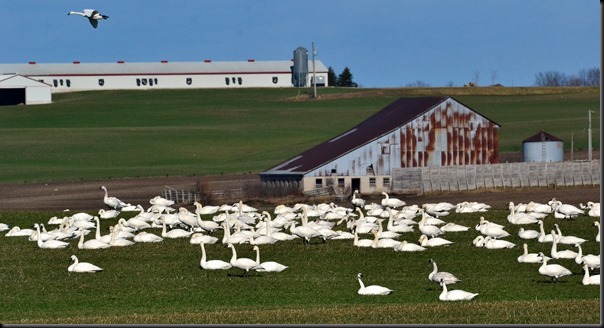 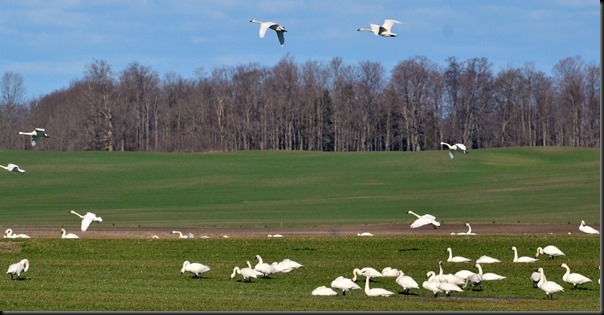 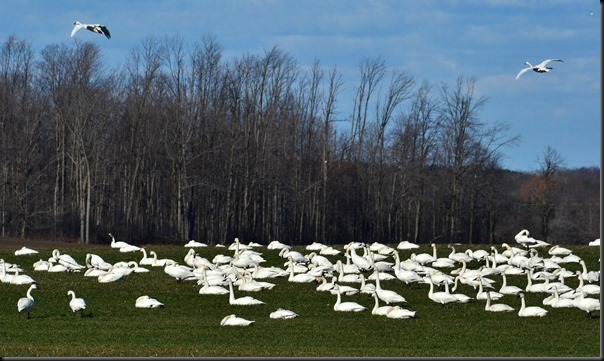 What a sight it was and what a piece of luck to be able to just sit there and watch them coming in and touching down.  How they must have been struggling against that wind this morning. 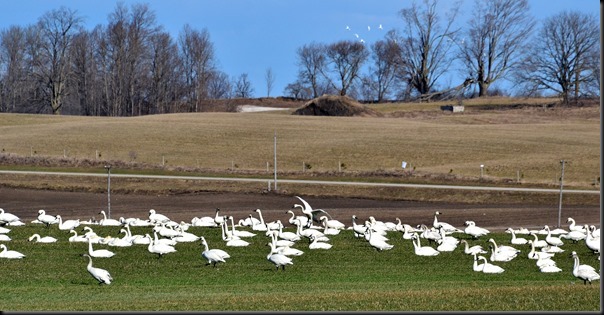 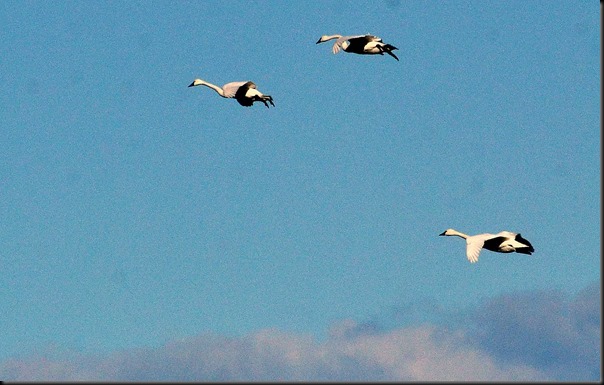 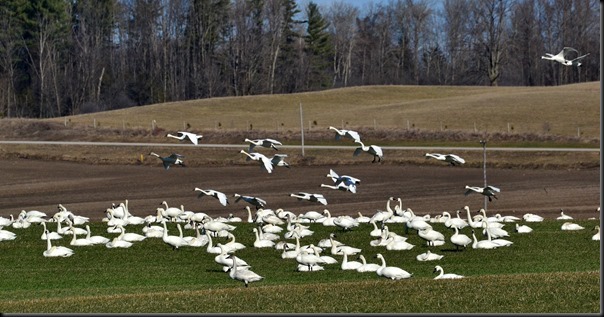 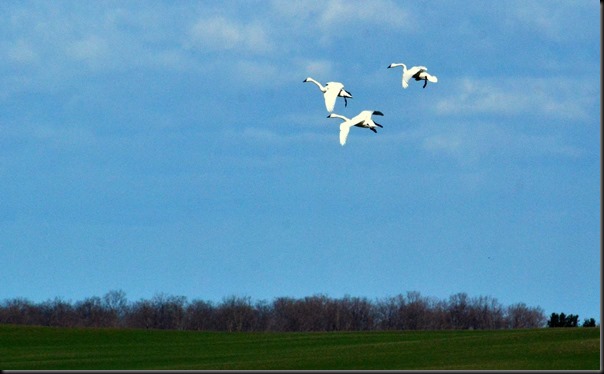 THEY JUST SEEMED TO HANG IN THE WIND DROPPING ALMOST VERTICALLY TO THE GROUND….THESE THREE COMING IN HIGH ALREADY HAVE THEIR LANDING GEAR DOWN 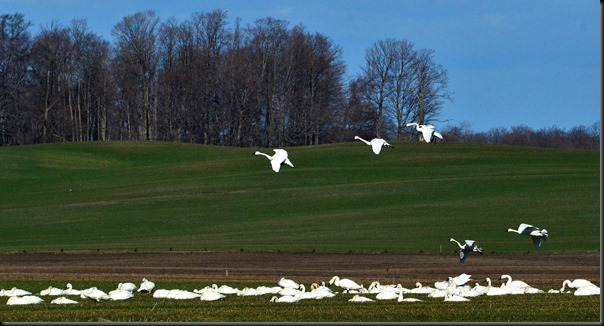 Stopping by and re-visiting some of our old familiar sites our travels eventually led us into the north end of Goderich where I stopped at the Maitland Medical Center.  Slipped in to set myself up a Doctor’s appointment and they said come back in an hour.  Well now how’s that for a piece of luck to get in so quickly.  Pheebs and I took the opportunity to take us for a drive down around the harbor.  Big waves on the clear blue green Lake Huron waters.  Looked like 3 large lake freighters have spent the winter in harbor.  We also managed to finally get the Jeep washed.  What a mess it was and next will be a huge interior clean-up. 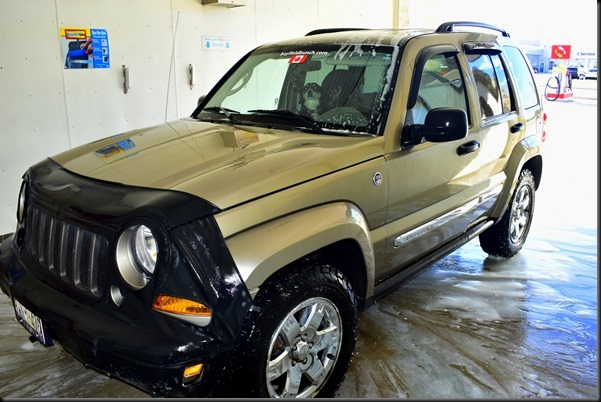 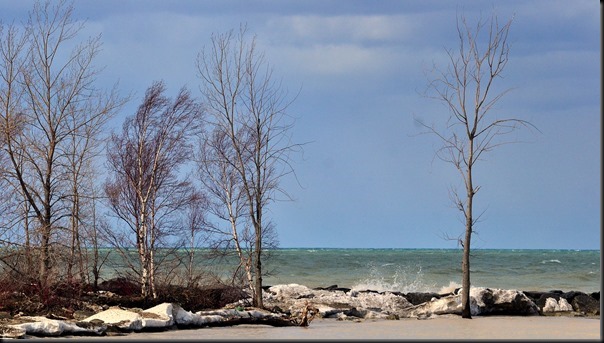 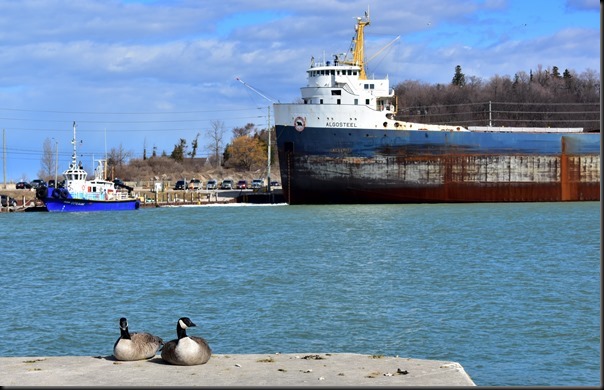 Back to the medical center where I was probed and prodded.  Well you know what it’s like with all that stuff so I don’t need to fill you in on the details.  Looks like they are now in the process of lining some things up for me so we’ll see what happens from here.  Somebody asked in the Shout Box why we came home so early.  Medical reasons is why. 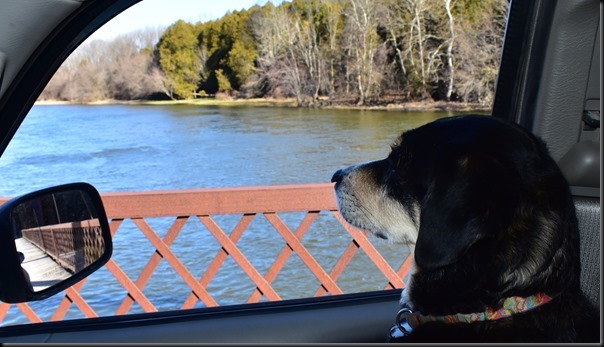 PHEEBS WAS SURE HAPPY TO BE OUT FOR A GOOD OLD JEEP RIDE THIS MORNING AND I WAS SURE HAPPY TO HAVE HER ALONG TOO:))
It was nearly 1 o’clock before Pheebs and I finally made it home.  Kelly was about ready to send out a search party for us.  Had I had enough energy left and had it not been such an icy wind going on I would have grabbed my big leaf rake and got myself started on the yard’s spring clean-up.  As it was I just headed for the cozy warm sun room and dozed myself off in one of our Horton recliners for 10 minutes and that rested me up enough to begin tonight’s post. 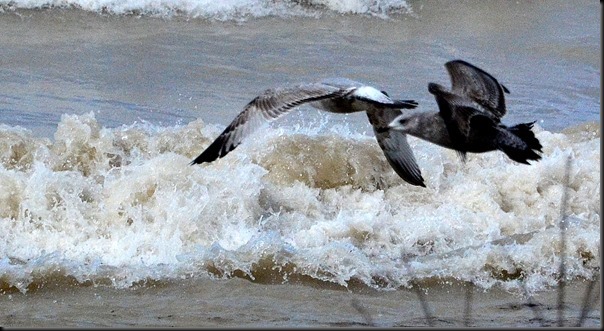 I sometimes like to look back in my posts to see  where we were and what we were doing a month or maybe a year ago.  Last night in looking back to early February I scrolled through some posts and was totally surprised to find my seemingly jinxed and very elusively difficult to publish long lost February 10th post.  It was at the beginning of the Open Live Writer 501 error fiasco that I ran into trouble posting this one.  Anyway and finally, here is my post for the day we went to Temecula California and did a drive-thru of the Escapees RV Club JoJoba Hills along the way…….Big City Traffic Madness In Southern California Lands us On Interstate 15 North.....Then South!! 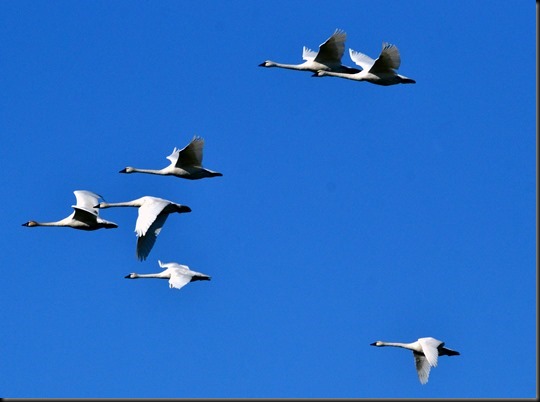 GROANER’S CORNER:(( Two beggars were sitting side by side on a street in Rome, Italy.
One had a Cross in front of him; the other one was holding the Star of David. Many people went by, looked at both beggars, but only put money into the hat of the beggar sitting behind the Cross. The Pope came by. He stopped to watch the throngs of people giving money to the beggar who held the Cross while none gave to the beggar holding the Star of David. He felt sorry for him. Finally, the Pope approached the beggar with the Star of David and said: 'My poor fellow, don't you understand? This is a Catholic country; this city is the seat of Catholicism. People aren't going to give you money if you sit there with a Star of David in front of you, especially when you're sitting beside a beggar who is holding a Cross. In fact, they would probably give more money to him just out of spite!' The beggar with the Star of David listened to the Pope, smiled, turned to the beggar with the Cross and said: 'Moishe, would you look who's trying to teach the Goldstein brothers about marketing?'
-----------------------
Paul got a part time job at the Post Office. The first assignment his supervisor gave him was the job of sorting the mail. Paul separated the letters so fast that his motions were literally a blur. Extremely pleased by this, the supervisor approached Paul at the end of his first day. "I just want you to know," the supervisor said, "that I'm very pleased with the job you did today. You're one of the fastest workers we've ever had."  "Thank you, Sir" said Paul, beaming, "and tomorrow I'll try to do even better."  "Better?" the supervisor asked with astonishment. "How can you possibly do any better than you did today?"  Paul replied, "Tomorrow I'm going to read the addresses."
Posted by Al Bossence at 3/08/2017