OUR DECK PROJECT IS ABOUT TO GET UNDERWAY:))

HEY MISTER IS IT SPRING OUT THERE YET AND CAN I COME OUT TO PLAY??

With no wind or rain in the air and needing to pick up my 3 pounds of deck screws and missing 2x6x8 missing deck support plank Pheebs and I were off to Clinton first thing this morning......and sailed right past the hardware store.  Our missing the hardware store was intentional though.  Didn't want to be cruising around country roads with a big plank sticking out the back of the Jeep so our intention was to first have us a little Jeep ride then pick up the hardware stuff on the way home. 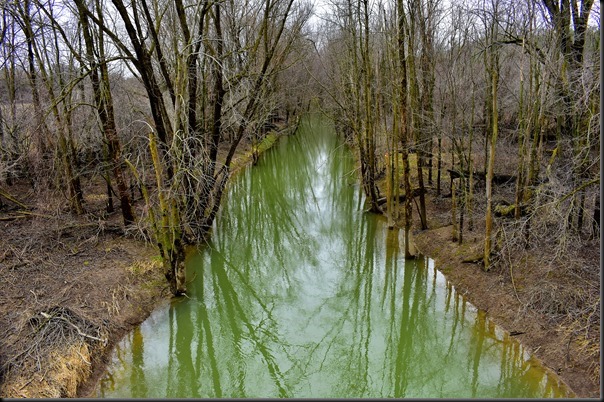 Picked up our usual fare at Hortons and off we went under cloudy skies to look for some photos.  Well wait a minute….it wasn’t exactly our usual fare.  Stopped first at Bartliffs Restaurant & Bakery for some carrot muffins and then it was only a coffee I picked up at Tim Hortons. 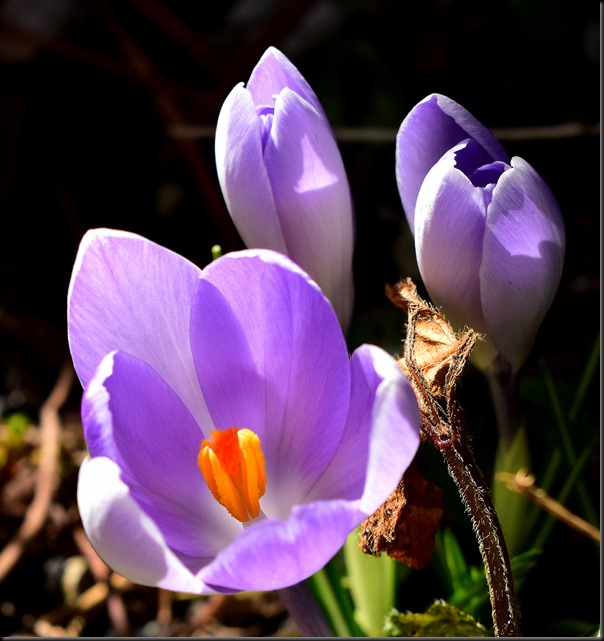 Cloudy days are not ideal for finding colorful photos so the bland gray leafless countryside was not too inspiring.  Oh well it was warm in the Jeep and we had us some great relaxing instrumental ambient music going so we just doddled along enjoying each other's company.  Us guys sure are the very much most best Pals:)) 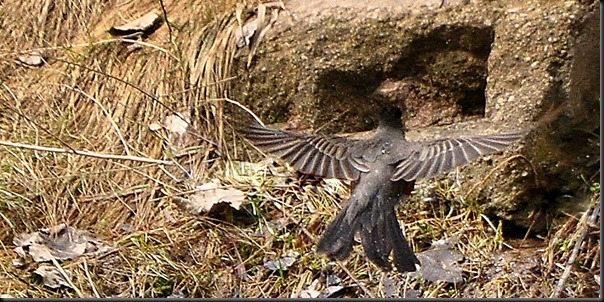 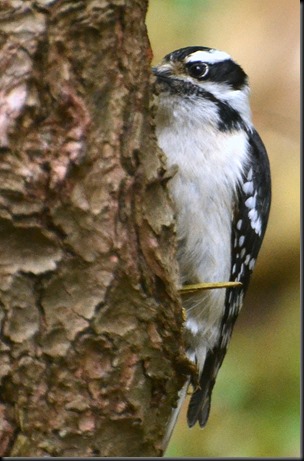 A ROBIN COMES IN FOR A LANDING

It was going on 11 by the time we made it back to Clinton and stopped into Langford Lumber for our missing stuff.  They had my 3 pounds of deck screws in a box at the counter and my missing board sat patiently out back waiting for me.  Minutes later we had the whole 8 foot plank inside the Jeep and headed the 8 short miles for home. 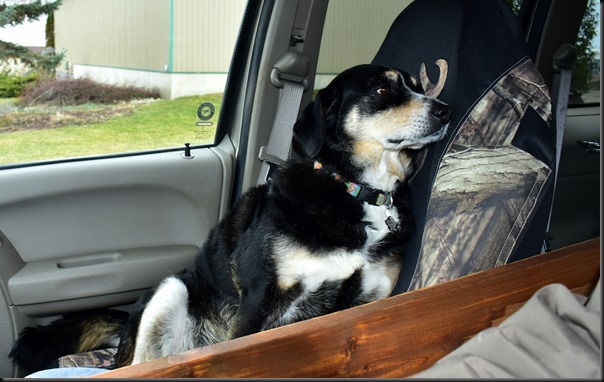 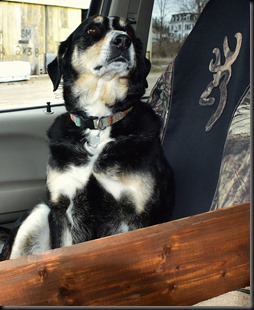 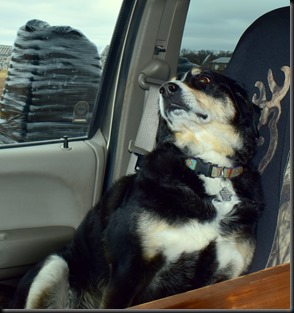 ‘I’M GETTING STRESSED OUT DAD AND I WANT THIS THING OUGHTA HERE!!!! 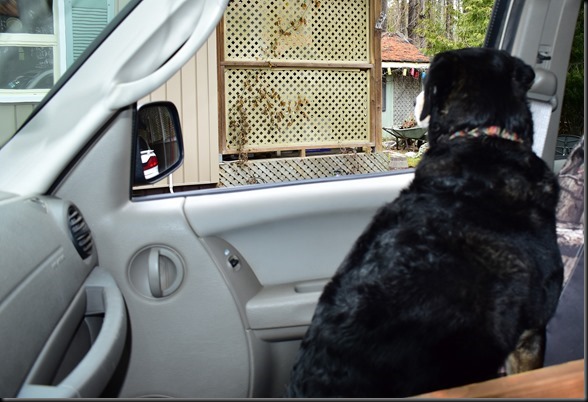 One of the reasons I always enjoy our annual Spring yard clean-up is the satisfaction of taking winter’s mess and cleaning it up.  I have almost always found that making something constructively nice out of a mess generally gives me a nice sense of accomplishment.  Today I mucked out the frog pond, re-planted half a dozen ferns, loaded some old rotten stumps into the utility trailer, and dug a short narrow trench to bury a section of garden hose.  Had myself a nice relaxed tired on by the time I came into the house and that ‘good feeling’ stuck with me for the rest of the day:)) 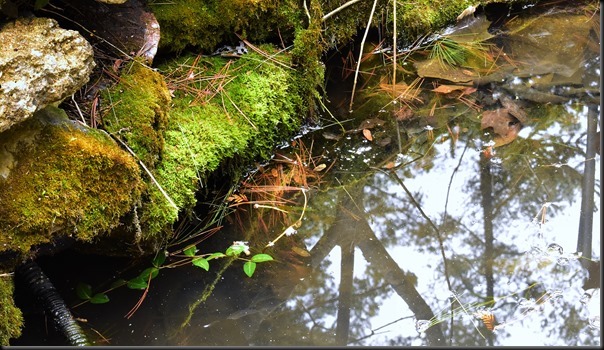 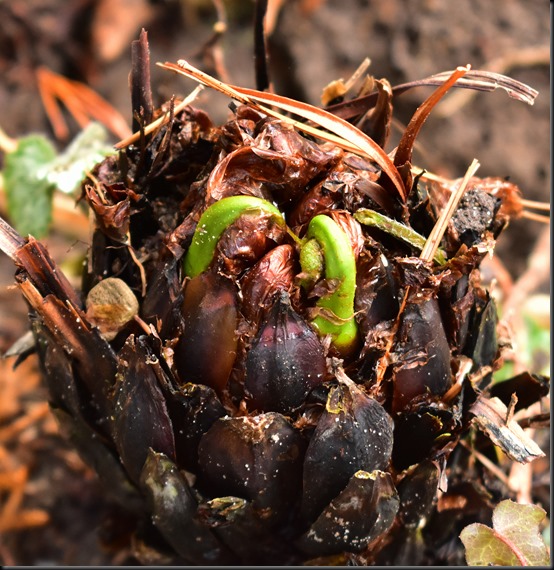 FERNS ARE BEGINNING TO SHOW SOME GREEN 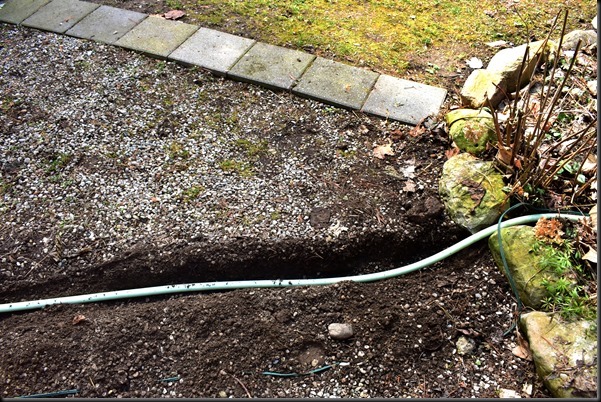 PUTTING A SHORT SECTION OF A GARDEN HOSE UNDERGROUND

Our first burst of sunshine occurred at precisely 1:02 this afternoon.  The second sun splash hit us at 1:33 p.m and by 3 p.m. patches of blue were beginning to appear overhead.  Bruce dropped by and left a few tools in the carport.  He’ll be back at 10 in the morning and we will begin the back porch deck project.  Power tools will be involved……..wish me luck!! 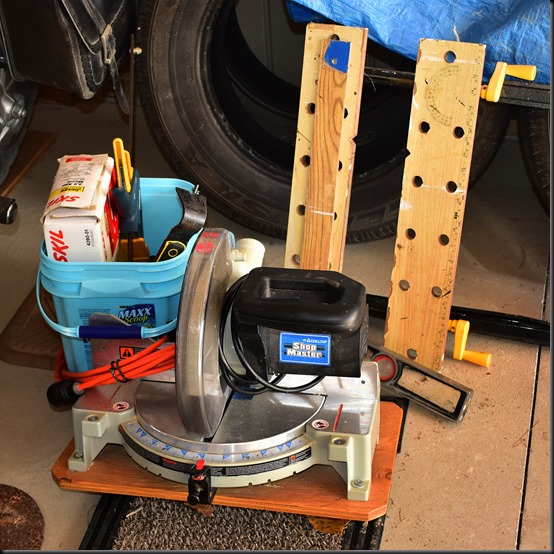 OH-OH LOOKS LIKE SOME SERIOUS TOOLS HERE…..I HAD BETTER DIG OUT MY SAFETY BOOTS AND HARD HAT AND STRAP ME ON A FLAK JACKET

Spotted my first Spring Crocus this afternoon.  Having planted a bunch of things late last Summer I am very curious to see what comes up where now.  Because I can’t remember most of what I put into the ground 7 months ago I may very well be in for a few nice surprises.  Aren't these aging minds of ours just the most wonderful things eh…………….. 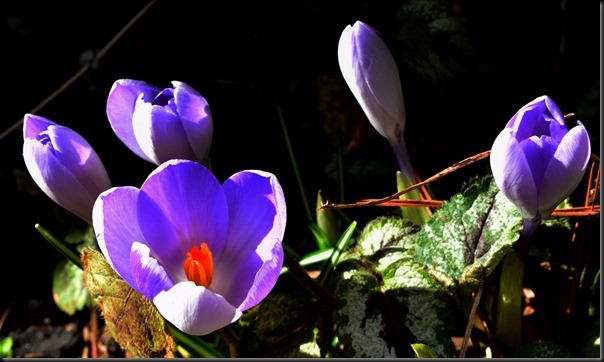 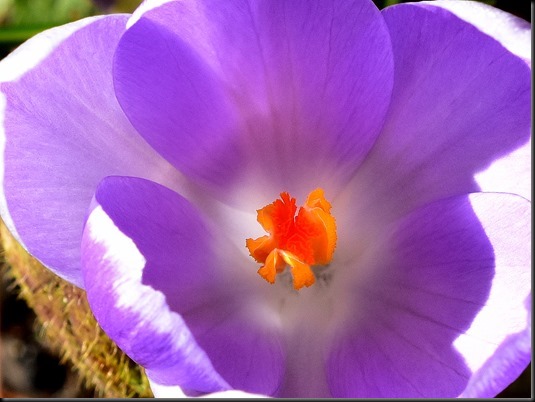 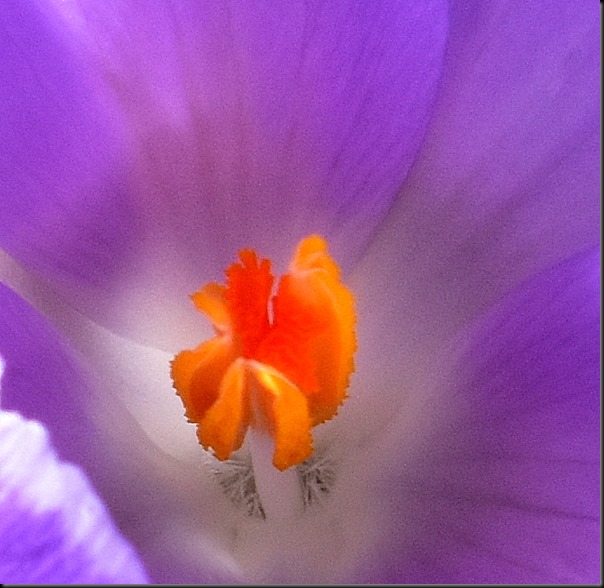 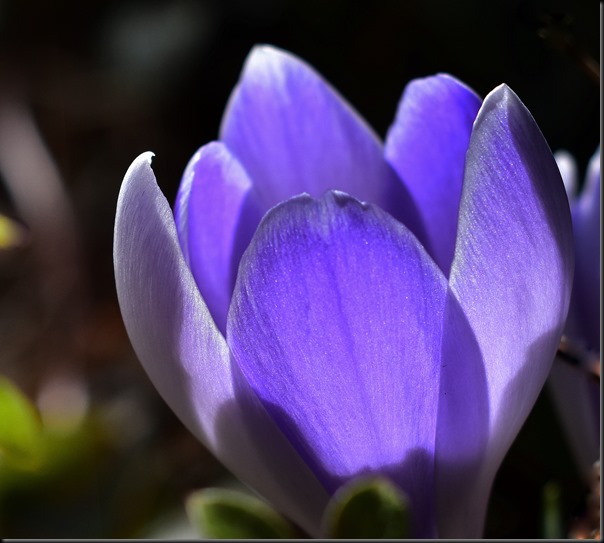 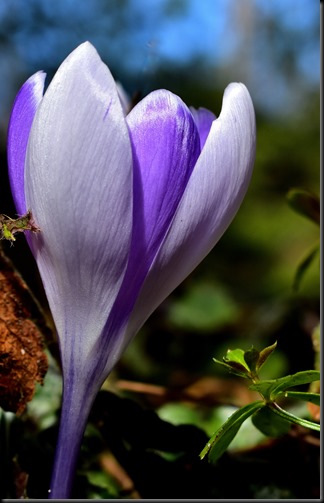 GROANER'S CORNER:(( A fellow tries to cross the Mexican border on a bicycle with two big bags balanced on his shoulders. The guard asks, 'What's in the bags?'
The fellow says, 'Sand!'  The guard wants to examine them. The fellow gets off the bike, places the bags on the ground, opens them up, and the guard inspects... only to find sand. The fellow packs the sand, places the bags on his shoulders, and pedals the bike across the border. Two weeks later, the same situation is repeated... 'What have you there?'  'Sand'  'We want to examine.'  Same results... nothing but sand and the fellow is on his way again.  Every two weeks for six months the inspections continue. Finally, one week the fellow didn't show up. However, the guard sees him downtown and says to the fellow, 'Buddy, you had us crazy. We sort of knew you were smuggling something. I won't say anything - what were you smuggling?' The fellow says, 'Bicycles.'

They say we learn from our mistakes which is why I make as many as possible.  I will soon be a genius.