WE HAD TWO GOALS TODAY, LAUNDRY AND TRAVEL....AND WE DID ACCOMPLISH ONE OF THEM

When I woke up Wednesday morning I had no idea we would have the big wheels rolling a couple hours later but that's not unusual for us when it comes to travel plans.  Kelly asked me what my plans for the day were and I told her I didn't have any.  She didn't have any plans either and that started the ball rolling.  Well Okay if we don't have any plans maybe we'll just head out then.  And that's what we did.

It was about 9:30 when we waved good-bye to the Muchacho Mountains and headed south on Ogibly Road to I-8 heading east.  Quick stop at Walmart on Pacifica Ave in Yuma for some groceraries and that was it.  We soon had Yuma disappearing in our rear view mirror.
Traffic is always light on the section of I-8 between Yuma and Gila Bend so we had us an uneventful drive on what turned out to be a mighty fine weather day.

Stopped at Gila Bend's east end Shell station for gas, water, and propane.  Dumped the gray and black tanks as well.  The big orange and black Gila Monster in Wednesday's post was taken here.  It was early afternoon when we made our way from Gila Bend down highway 85 to north of Ajo Arizona and pulled into the Rodeo/Roping Park area east of the highway.  There is a dry camping RV section here but with half a dozen rigs parked around we decided to boon-dock in the parking lot near the roping arena.  There is actually no arena building here just an open air corral type of arena

Nice sunset and soon as darkness fell I was outside with my binoculars and camera marveling at all the activity going on in the night sky over the Barry M. Goldwater military range.  Many twinkling aircraft lights in the air plus the mysterious bright hardly moving amber lights.  At one point I saw 5 of them in the sky at the same time.  Sometimes they would be single lights and sometimes in pairs.  My first thought was flares because I've seen military flares before but with my binoculars I was able to determine these were not flares.  Flares move vertically in a downward motion and these flares were moving horizontally across the night sky and way to slow for any winged aircraft.  Helicopters maybe but I thought even too slow for helicopters.  They basically hung in the sky moving horizontally.  Some kind of military craft no doubt but for me they were Unidentified Flying Objects simply because I myself could not identify them.  Should mention these objects were in no other area of the sky except over the Goldwater range to our north and northwest.

Wednesday night under the stars was windless and warm while early Thursday morning stepping out with Pheebs under the stars we were greeted with a cold north wind and it kind of hung around for most of the day.


Our two part goal was to hit the laundromat in Ajo this morning then continue our journey in a southeasterly direction.......and yes we do have a definite destination in mind somewhere in southern Arizona.  Well we at least accomplished half of that plan by getting our laundry done.  We were soon back to the rig with plans to hook up the Jeep and head out but gol darn it

our plans changed again.  I did get the Jeep hooked up alright but think it was somewhere between our egg salad sandwiches and my peanut butter sandwich that we decided it was already too late in the morning to go anywhere and that was that, we decided to stay a second night north of Ajo.

And a coincidence for us this morning when Kelly and Pheebs were out for an early walk.  Another dog came running excitedley over to see Pheebs and Kelly thought the dog looked familiar.  The owner walking nearby his small Scamp trailer came walking over and Kelly recognized him.  It was Rick and his dog Lady whom we had met over on Darby Well Road back in early December of 2011  How nice to see him him and Lady again after all these years.  Truly a nice fellow Rick has been spending his winters here in the Ajo area for the past 17 years.  Like us, he prefers the quiet solitude of the desert and generally boon-docks in areas away from people.  An experienced desert dweller Rick is a good 'go-to' guy for answers to many many questions and this morning he explained those high altitude slow moving amber lights in the night sky over the Barry M. Goldwater military range.  He said they are indeed flares and the reason they sometimes travel horizontally is due to the winds aloft at higher altitudes.  Made perfect sense to me so my UFO sighting quickly switched to an IFO sighting.  Identified Flying Object.  Still doesn't explain just exactly what purpose they serve for the military but at least the wind drifting flares made sense to me. 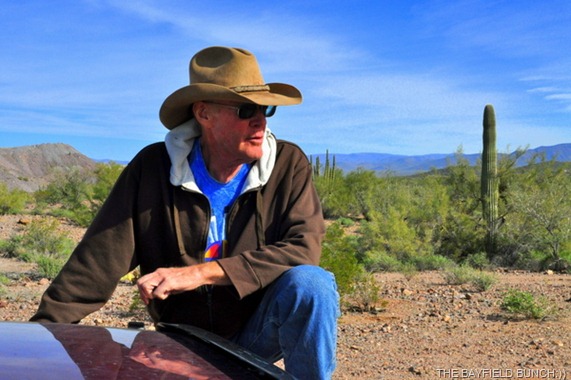 When we talked to Rick first thing this morning we mentioned we were on our way into town to do our laundry.  Well by cracky that's right where he was headed too so we all had us a fine old chin wag at the laundromat.  Here's one of my posts from when we met Rick and Lady on Darby Well Road entitled Schmoozing With Our Neighbors
A lazy afternoon for us with the only excitement being a lady who drove in pulling her horse trailer with  2 horses aboard.  She unloaded them and gave the beautiful horses a big run in the roping arena.  She had bales of hay on the trailer's roof and we think she may have stayed the night with her horses overnighting in a covered corral beside where she was parked.

Our plans are to roll out in the morning seeking out new green pastures but of course you know what kind of planners we are so who knows where we'll end up Friday.  Maybe nowhere..............

GROANER'S CORNER:(( A young woman, pursuing a graduate degree in art history, was going to Italy to study the country's greatest works of art.  Since there was no one to look after her grandmother while she was away, she took the old lady with her.  At the Sistine Chapel in the Vatican, she pointed to the painting on the ceiling. 'Grandma, it took Michelangelo a full four years to get that ceiling painted.'  'Oh my, 'the grandmother says.  'He and I must have the same landlord.'