HAD MYSELF A FEW 'WOWSERS' MONDAY NIGHT 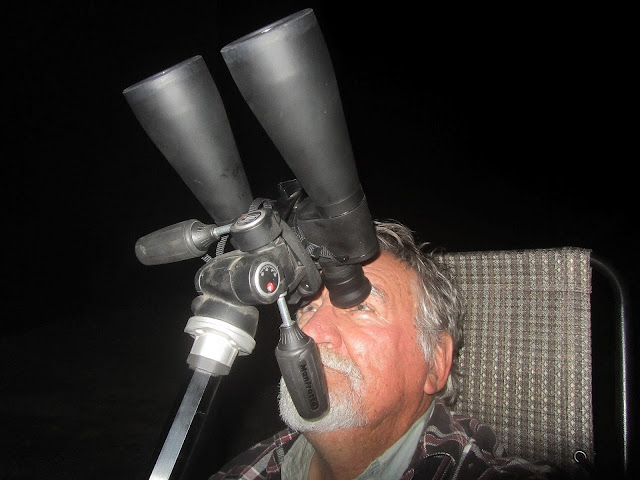 Not long after the Sun had settled itself over the western horizon I had my tri-pod set up and my Celestrom 15x70 binoculars mounted atop it.  I was about to 'WOWSER' myself.  The constellation Orion was straight overhead slightly to the south and that meant it wasn't going to be any kind of easy feat for me to get myself into some kind of configuration to have those binoculars tilted straight up on that tripod.  Luckily when I bought the Manfrotto tri-pod years ago I made sure it was solidly adaptable to many configurations.  I had to somehow get my eyes underneath those binoculars and look straight up.  Because of the strong magnification with these binoculars they really need to be on a solid and steady tripod and not hand held.  Below are 2 selfies I took and 3 photos Kelly took while I was leaned back in my gravity chair with the tripod tipped towards me holding the binoculars over my face. 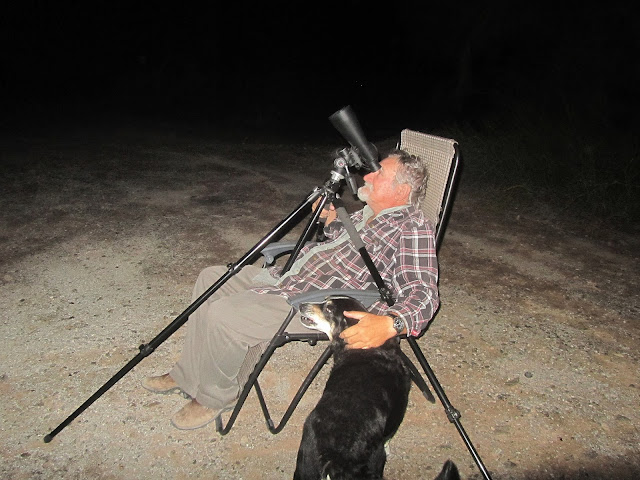 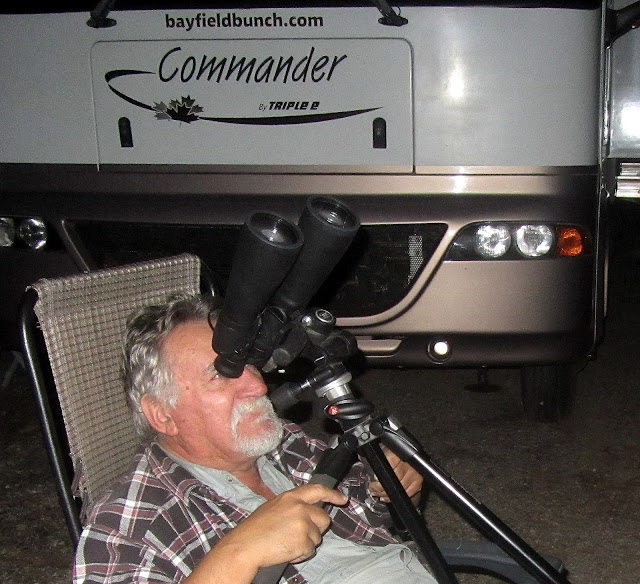 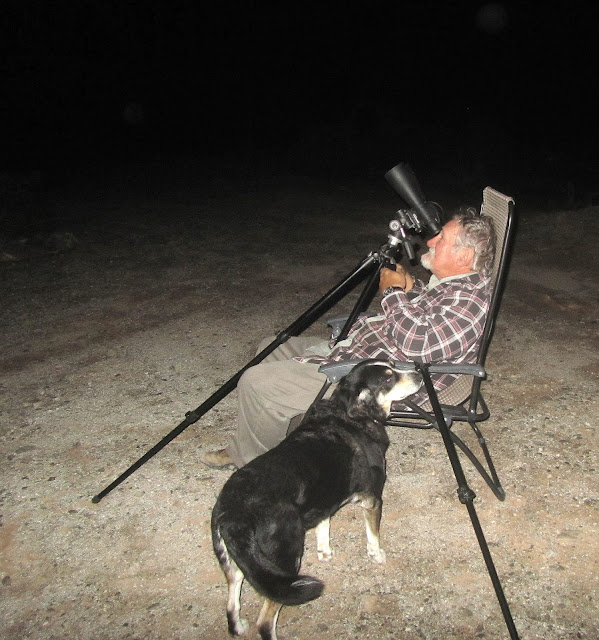 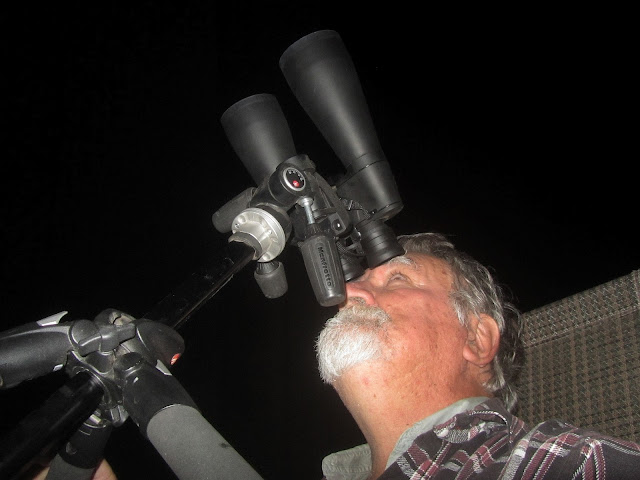 My first 'WOW' came when I looked at the Orion Nebula.  Not my first time seeing it but Monday night it just seemed to jump right out of the crystal clear sky.  I was momentarily startled when lights suddenly flashed through my field of vision from left to right.  It was an airplane heading west.  From Orion's Nebula I swung the binoculars even higher and contorted myself even more as the Pleiades came into view filling my field of vision and giving me my second 'WOW' for the night.  From there I wandered around the sky checking out a couple Planets.   Both Venus and Mars were visible with Venus shining like a great white and green beacon in the sky.  Maybe tonight I will haul out my 80mm Stellarvue Nighthawk refractor telescope and have an even closer look at things.
Monday morning was my turn with the Jeep and this morning it was Kelly's turn so she headed off into Yuma to check out a few stores in the Yuma Palms Mall.  Pheebs and I had the house to ourselves and not long after Kelly left I was overcome by a rush of rare energy so right away figured I had better take full advantage of that while it lasted,  A week ago while pulling out of our tight spot south of Borrego Springs I got the passenger side of the coach up against an old half dead Creosote shrub rounding a corner.  What the hard knubby branches of the Creosote bush did was to make for some rather creative Picasso type erratically wavy scratches along the bottom passenger side of the Motorhome.  In the southwest these scratches are commonly referred to as 'desert pin striping' and is a common fixture on most every boon-dockers vehicle.  A right of passage you might say and worn proudly by many.
I always travel with waaaaaay too many vehicle cleaning supplies but this morning the rubbing compound and wax came in very hand as I worked away on our side door plus 2 bin doors a wheel well and our hot water heater section.  Always amazes me how well that rubbing compound takes out scratches.  Well not totally for some of them of course but standing back about 5 feet and from certain angles the scratches are completely invisible.  I threw a coat of wax on the cleaned up areas as well.  Still 3 large bin doors to go but I didn't want to blow out all my energy in one big shot.  Instead I slipped inside and relaxingly plugged away at cleaning up the whole Motorhome dash area.  A nice sense of accomplishment and any accomplishment for me is always a good feeling.  In between those two little jobs Pheebs and I had us a big game of toys outside.  Sometimes she gets a big crazy going on and races around about 600 miles an hour with sand and gravel flying every which a way.  So nice to see her run so fast. 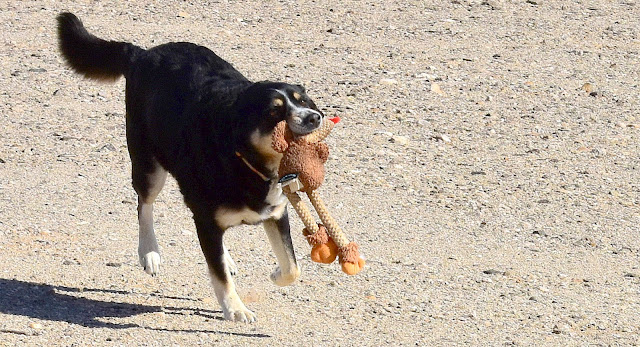 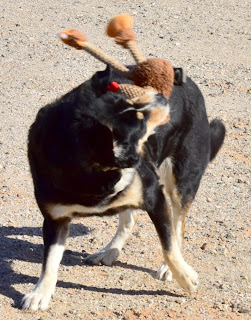 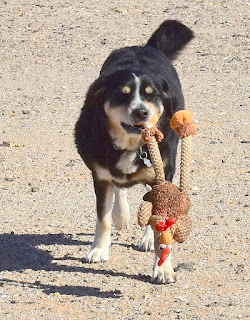 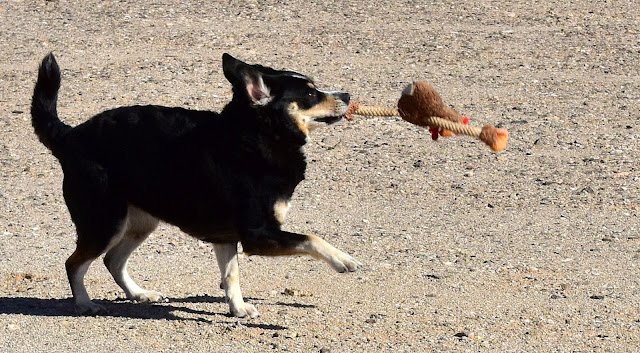 Be sure to check out Doug's post over at Miss Adventure Travels to see how he and Yuma got themselves into a bit of trouble they very nearly didn't get themselves out of.  Having been in a similar situation several times I know exactly how Doug was feeling.  It's what good and not so good memorable moments and adventures are made of. 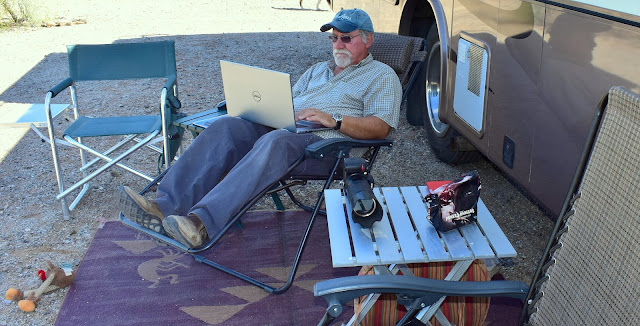 Had a couple fellow Canadian RV'ers drop in this afternoon.  Gerrit Van Keulen has been reading my blog for a number of years now and dropped around to our house in Bayfield about 5 years ago one time to say hello.  Gerrit and his wife sold their home in Wingham Ontario a number of years ago and have been on the road happily fulltiming ever since.  They have a place on the east side of Yuma in the Fortuna Hills.
Sorry for all the 'selfies' and 'me' photos today but I really didn't have much else in the way of new photos to post so it looks like you got stuck with me.  Well until I was able to get a few pics of Pheebs and Shuster the Rooster tearing around that is. 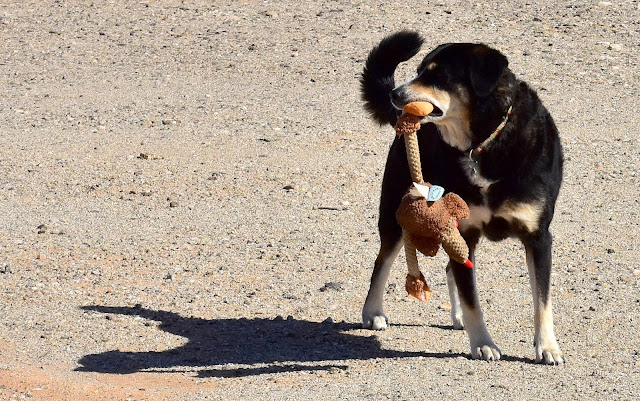 GROANER'S CORNER:(( Ron and John, 2 Blonde Guy were building a house.  John was on a ladder, nailing.  He'd reach into his nail pouch, pull out a nail, look at it, and either toss it over his shoulder or proceed to nail it into the wood.  Ron couldn't stand it any longer and yelled, 'Why are you throwing some of the nails away?'  John explained, 'When I pull it out of my nail pouch, if it's pointed toward me, I throw it away.  If it's pointed toward the house, then I can use it.'  Ron replied, 'What's wrong with you?  Don't throw away the nails that are pointed toward you! They're for the other side of the house.'

When she got flowers from her husband on Valentine's Day, my daughter quickly opened the card. All it said was, "No."  What did that mean? She called her husband and asked him.
"I didn't attach any message. The florist asked if I had a message and I said, 'No'." 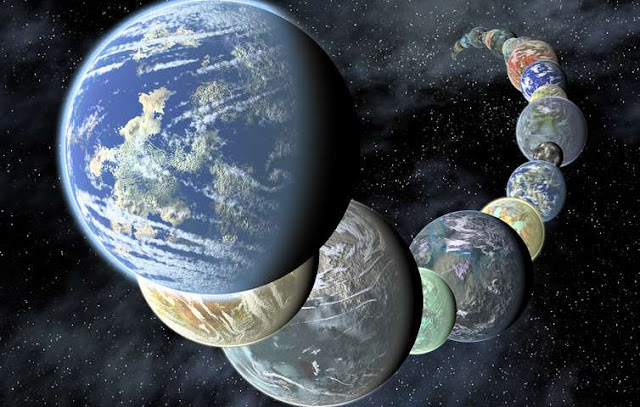