With night's becoming warmer now it is much nicer being outside under a great canopy of stars.  Took a few photos and the thought occurred to me how nice with no mosquitos in the air.  Just another one of the many fine perks here in the south-west during these winter months.   In my books no bugs is good bugs:)) 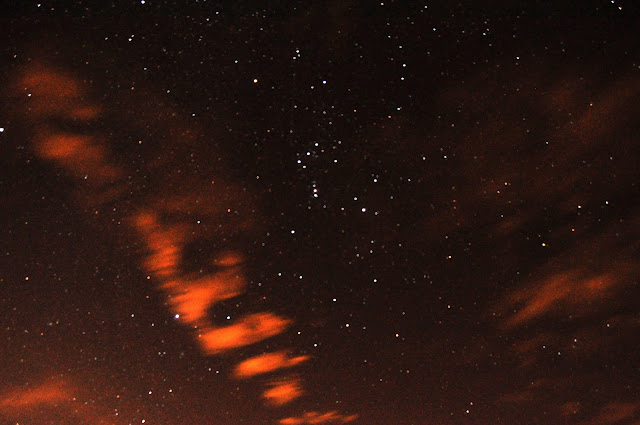 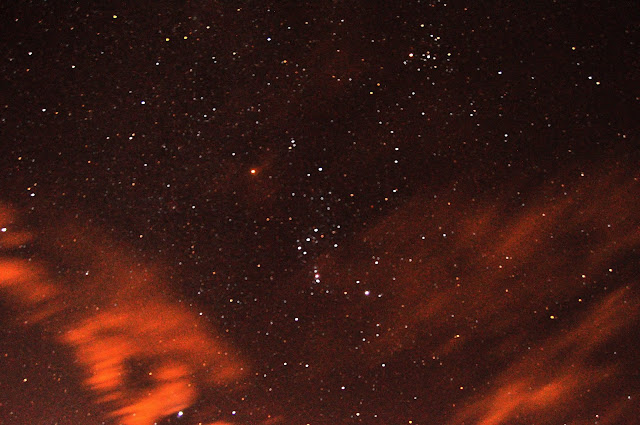 Had us big wind advisory going on for today so this morning I anchored our satellite dish down real darn good and positioned the Jeep as a windbreak.  Winds howled and barreled in from the south-east and by noon there was no keeping a hat on anymore while outside.  Surrounding horizon lines disappeared into clouds of blowing sand.  Had we stepped out we would have had our socks blowed right off. 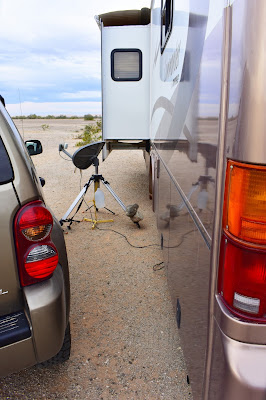 On the leeward side of the coach before the winds reached their worst potential for the day Kelly was able to barbecue a steak.  Would you believe neither one of us could even remotely remember the last time we had barbecued while traveling.  We're guessing almost 5 years ago about the time we bought our Congress house in late February of 2012.  Of course our orange barbecue was used a lot while at the house but even on our short winter side trips we never bothered taking it along. 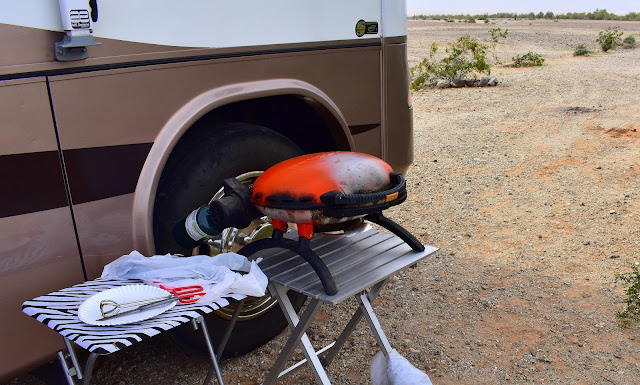 Here's an on-line semi-monthly newsletter/magazine I recommend for fellow South-West RV travelers.  It's called Desert USA . Always interesting articles focusing on the southwest with much to be learned about history and things to do and see in these vast deserts and mountain lands.  Articles are not lengthy and I often get a kick out of how many of the places it features we have already been to.  And while I'm at it check out Desert Magazine and be sure to have a look at the archives from as far back as the 1930's.  This magazine is chocked full of western history for all you old history buffs out there.

And here's another example of where my memory is at these days.  Looking for something in a cupboard above the dash on the drivers side this morning I noticed a brown case tucked down in the back.  Pulling it out I realized it was my 15x70 Celestron binoculars I had bought several years ago for star gazing.  I had completely forgotten I had them and the last time I remember using them was one night at our Congress house 2 years ago.  Makes me wonder what other little treasures I have sitting around somewhere I have forgotten about.  On Thursday I completely forgot to email Cathie and Gord directions to where we were parked on Ogilby Road.  When Kelly came home she asked me if I had remembered to email Gord and Cathie............nope I hadn't.  Kelly quickly dashed them off an email with directions and they wandered in a short time later after driving around for miles upon desert miles looking for us.  Like I've said before, it's not easy being me:(( 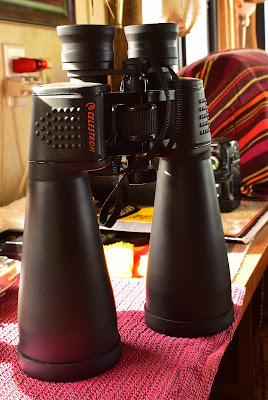 Cathie and Gord headed off into Yuma this morning to have themselves a look around and I replied to an email they sent inviting them over for coffee when they returned so we had us a nice afternoon here in the rig chatting.  Gord's very savvy with technical things so we learned a lot of cell/smart phone stuff.  Well Kelly learned a lot of stuff.  I was lost right from the get-go but did manage to throw a few chirps in here and there whenever I thought I was familiar with something.  'Thought' was the operating word there. 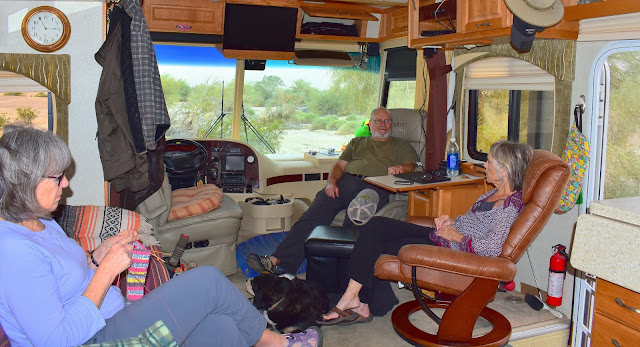 With Kelly's help I am very much enjoying setting up this new computer of mine.  I've transferred via thumb drive and email links most of the stuff from my Toshiba already.  Photos and music especially.  Took a bit of searching but Kelly was able to find a download for Picasa 3.9 so I am a happy camper for now.  Of course the writing is on the wall for Picasa and I really should begin learning myself another photo editing program.  Compared to Picasa Googles photo editing program is a joke.  It's obviously geared to 'snap-n-go' cell phone users and not people with any kind of a photography interest who take some pride in having their photos look as good as they can be.

At the time of publishing this tonight some of the wind gusts have really picked up.  Saw 2 Marine military helicopters earlier making their way back to their Yuma base from manoeuvers in the Chocolate Mountains and they were hugging the ground pretty close in the wind.  They were partly obscured by blowing sand at times. 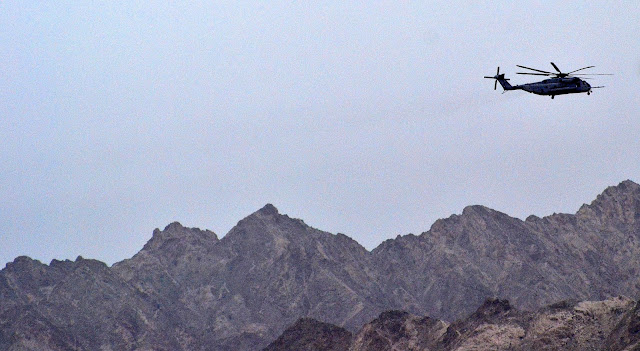 
A man lost two buttons from his shirt and put them in his pants pocket. But the pocket had a hole, so the buttons fell into his shoe. Unfortunately, the shoe sole also had a hole, so he lost the buttons. As pockets with holes, holes without buttons, and shoe soles with holes are useless, the man ripped the buttonholes out of his shirt and the pocked from his pants and tossed them in the trash along with the soles of his shoes.A police officer who was observing the man asked him for some identification. The man gave the officer a document that shoed he was an ordained minister of the gospel. When the officer began to escort him to a mental institution, the minister protested violently, asking why he was receiving such unjust treatment.“Look, we both know it’s the best place for you now,” the officer replied. “Anyone claiming to be a preacher who doesn’t save souls or wear holy clothes has probably lost his buttons.”