WE FINALLY ESCAPED THE YUMA WIND TUNNEL AND LANDED OURSELVES IN CALIFORNIA’S BORREGO SPRINGS…..YAAAAAY TEAM:)) 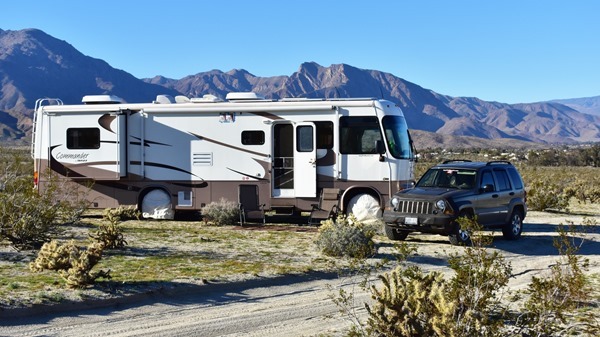 Checking Borrego Springs weather this morning we saw they were having 4 mph winds.  Checking here in Yuma the steady winds were 15 mph gusting to who knows what.  Forty, fifty mph maybe.  So here was our dilemma.  Do we sit tight and ride out the winds for who knows how long or do we saddle up, batten down the hatches and strike out for Borrego??

Winds were barreling in from the northwest and that’s just the direction we were headed so that meant headwinds which were better than tricky crosswinds from the north or south hitting us broadside.  We’ve driven in all kinds of windy conditions over the years so the decision was made to head off and see how we make out.  We needn’t have worried.

We had things packed up and squared away by 9:30.  Hooked the Jeep up then walked over to Wandering Willy’s camp to say good-bye.  He pointed to a dark pick-up truck with a fifth wheel aways away and said that was Ivan who had rolled in Friday.  No sign of life way over at Ivan’s camp so we didn’t walk over.  He might have still been wandering around upside down in his jammies:))

We soon had the big wheels rolling and made our way out to Ogilbe Road and turned north.  Wind was on our nose but nothing to worry about.  By the time we reached the northern end of Ogilbe Road at highway 78 and turned left heading west the winds had diminished to about nothing.  We had driven right out of the Yuma wind tunnel.   Set our sights on Borrego Springs and put the hammer down.  Beautiful sunny morning for a drive through the mountains and desert.  Especially the Imperial Sand Dunes.  How nice to be on the road going somewhere again:))

WEST OF THE SAND DUNES WE DROVE INTO CALIFORNIA’S AGRICULTURE BELT WITH FIELDS OF GREEN…..NO IDEA WHAT THIS CROP OF BURGUNDY STUFF WAS

Our first and only stop before reaching Borrego was the big Arco station west of Salton City on the northwest corner of highway 86 and S22.  Gray and black tanks dumped, propane, some gas and we filled the fresh water tank.  Half an hour later we were westbound on S22 for the 20 minute drive to Borrego Springs.

FILLING OUR FRESH WATER TANK AT THE BIG ARCO STATION

We were determined this time not to go to our usual spot on Rock House Road at the southern tip of Coyote Mountain.  We could already see there were too many RV’s there for us.  We slipped down around a big curve on S22 and pulled into a large hard packed sandy area across from Peg Leg Smiths.  This area is popular with younger folks and their ATV’s, dirt bikes, and dune buggies etc.  But no matter, we weren’t staying.  This we knew to be a good spot to un-hook the Jeep and so some scouting around for a boon-docking site.  Checked out one spot near the dump but it was to unevenly sandy.  From there we drove our tummies straightaway into Borrego Springs with a destination in mind. 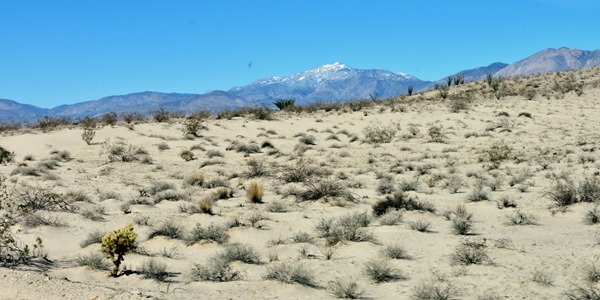 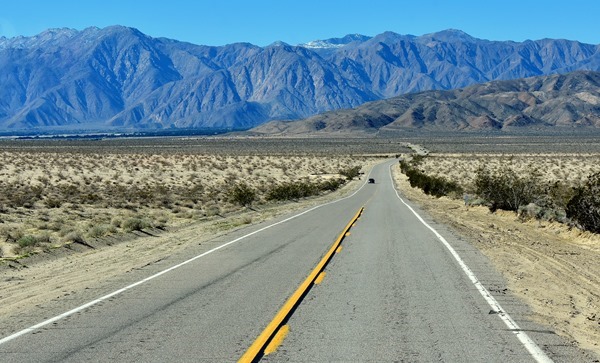 DROPPING DOWN INTO THE BORREGO VALLEY

Of course you knew we were going right to Jilbertos of course.  Things wouldn’t be right with the world if we didn’t pop into Jilbertos after first arriving in town you know.  The place was packed.  In fact we noticed right away soon as we got to Christmas Circle there sure were a lot of people in town today.  Big change since the last time we were here.  I think Jilbertos makes my favorite hamburger.  Double paddy:)) 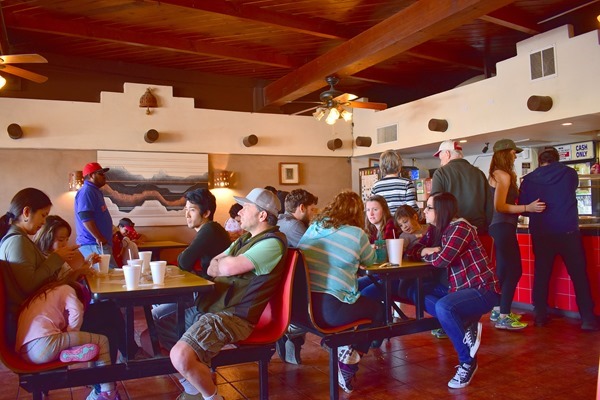 WOW WAS JILBERTOS EVER BUSY TODAY 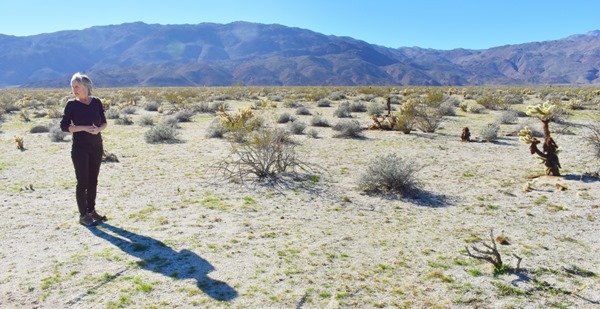 SCOUTING OUT A POTENTIAL BOON-DOCKING SPOT IN A NEW AREA

From Jilbertos we headed right out of town to an area we had scouted out a few years ago.  Only 3 other rigs around and we did manage to find us a spot.  Got out and had a look around.  Yep this would do.  Back into the Jeep and back to where we left the rig across from Peg Leg Smiths.  With Kelly following in the Jeep we headed back to our new spot.  Took a bit of wiggling to get in and I did have to use our rarely used hydraulic leveling jacks to get us on some semblance of an even keel.  We know it’s not the greatest site but it will be just fine for us.  No RV’s in front of us, no RV’s behind us, one RV about a quarter mile out on our right and one RV about 300 yards to our left.  I think we can live with that for now:)) 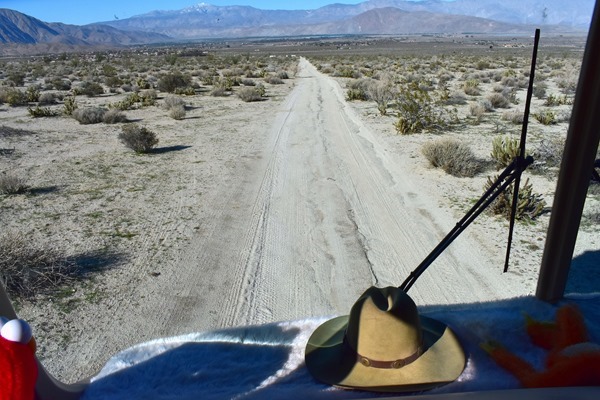 JOCKYING THE MOTORHOME DOWN A NARROW DUSTY ROAD

About 4:20 California time a big huge shadow loomed over us and I watched it slowly travel eastward across the wide expanse of the Borrego Valley in front of us.  The late afternoon sun had just slipped behind the mighty San Ysidro mountains directly behind us.  We are in one of my all time favorite places here at Borrego Springs and what a nice feeling to be somewhere different again and especially this time with a whole different view all around us. 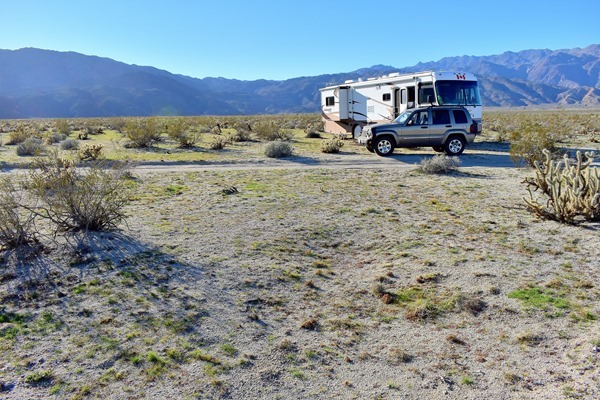 Sooooo nice to be out of that Yuma wind and with the air much calmer here in Borrego it feels much warmer.  Definitely was a right decision to pack up this morning and find us some much better weather.  After all isn’t that what RVing is all about.  How nice to have the freedom to pick up and move anytime one decides to do so.  We sure had been missing that these past nearly 5 years.

GROANER’S CORNER:(( A proud and confident genius makes a bet with an idiot. The genius says, "Hey idiot, every question I ask you that you don't know the answer, you have to give me $5. And if you ask me a question and I can't answer yours I will give you $5,000." The idiot says, "Okay." The genius then asks, "How many continents are there in the world?" The idiot doesn't know and hands over the $5. The idiot says, "Now me ask: what animal stands with two legs but sleeps with three?" The genius tries and searches very hard for the answer but gives up and hands over the $5000. The genius says, "Dang it, I lost. By the way, what was the answer to your question?" The idiot hands over $5.

Q: How do you catch a squirrel? A: Climb up a tree and act like a nut!