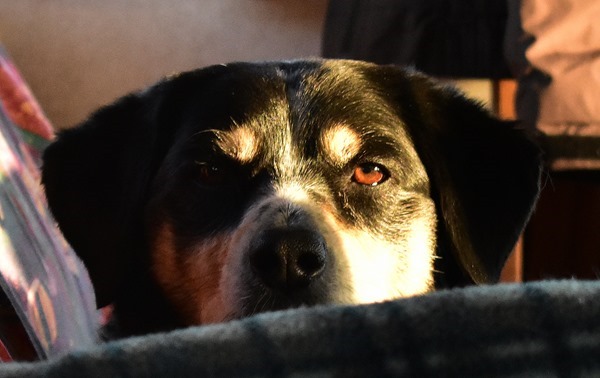 Kelly headed off into Yuma about 9:30 this morning to browse a few stores in the Yuma  Palms Mall.  Ten minutes after she left Pheebs and I had our heads buried in a carrot muffin.  I brewed up a coffee and we briefly considered pulling the slides in and and taking the rig for a cruise around a few desert Jeep roads so we could do our morning coffee and muffin routine just like we do so often back in Bayfield when we are home.  Luckily cooler heads prevailed and we left the Motorhome right where it is. 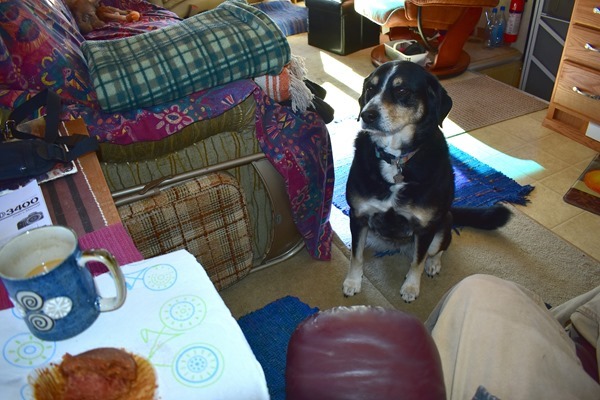 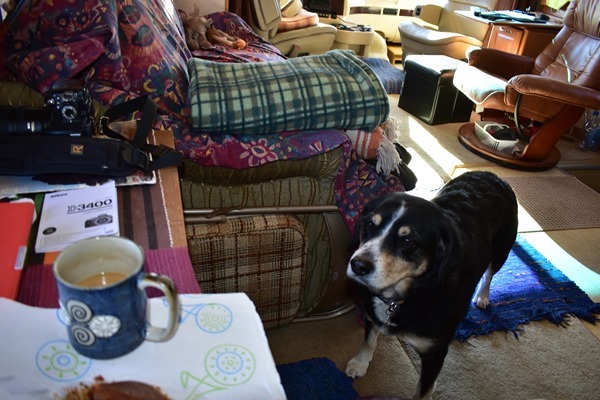 MAYBE I BETTER GET A LITTLE CLOSER JUST IN CASE’ 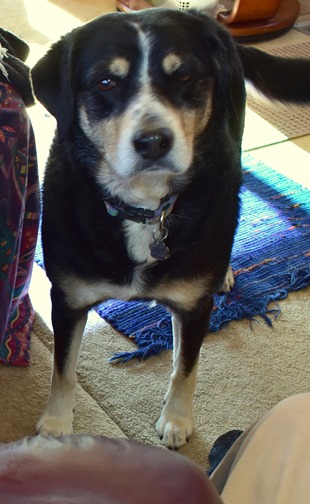 Kelly snapped on the TV for us before she left and Pheebs and I did watch two of our favorite half hour situation comedies back to back.  Corner Gas and King Of Queens.  Soon as they were over I snapped the TV off again and cranked up our Sirius Satellite Radio.  I do prefer Satellite Radio and it’s abundance of music channels.  I generally knock around between 4 of them…..052 Chill, 068 Spa, 071 Sinatra and 073 Fortys. 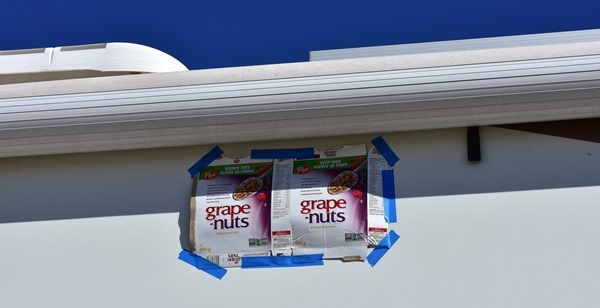 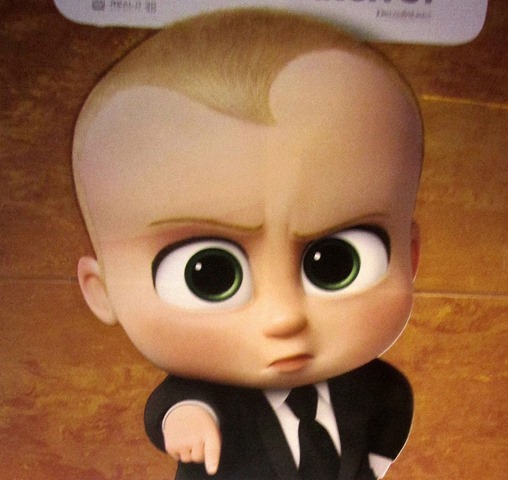 IF I TOLD YOU ONCE I TOLD YOU A HUNDRED TIMES….DON’T BE A WISENHEIMMER!!

Bright sunny day but cool winds from the north were not to my liking again.  Toyed with the idea of re-positioning the coach to give us a wind break on the passenger side but couldn’t quite get myself talked into it.  Looking up through our skylight I could see a combination of sand and rain had left it with a muddy residue.  That also told me our 4 solar panels must have that same amount of sandy residue on them and for sure that would definitely be interfering with our solar power.  Well, only one thing to do.  Get up on the roof and clean em!!  So that’s what I did and seeings how I had the glass cleaner out I did the rig’s outside windows as well with the exception of the big double windshield facing south. 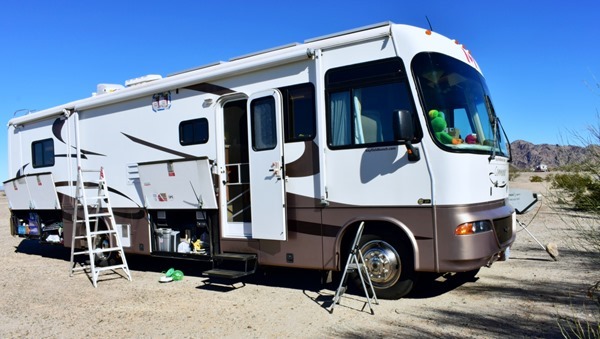 DOING A BIT OF GLASS CLEANING THIS MORNING 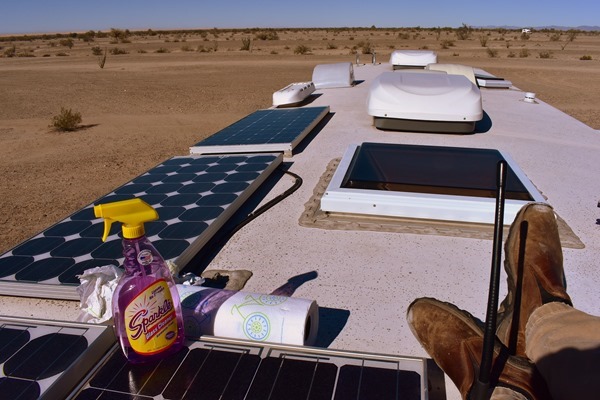 FOUR SOLAR PANELS AND TWO SKYLIGHTS UP HERE TO CLEAN 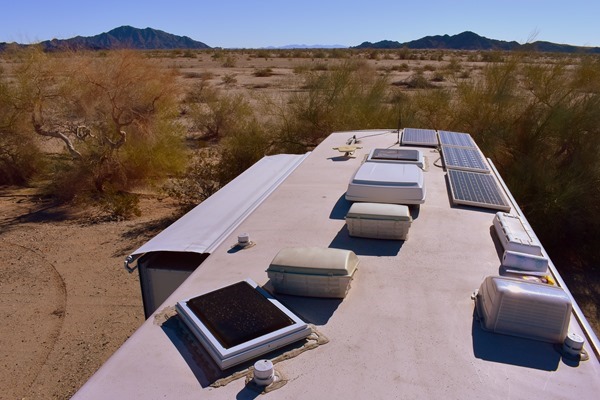 ABOVE LOOKING FORWARD SOUTHEAST AND BELOW LOOKNG  BACK TO THE NORTHWEST 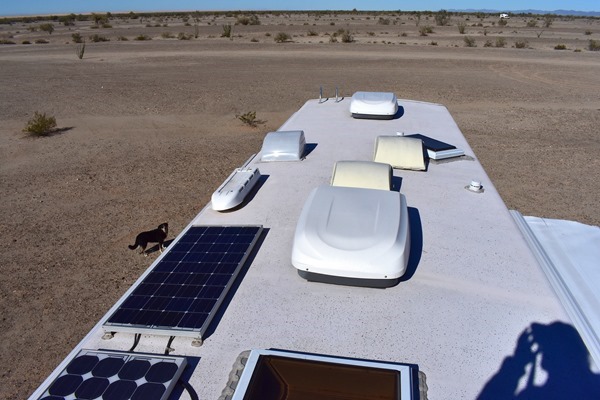 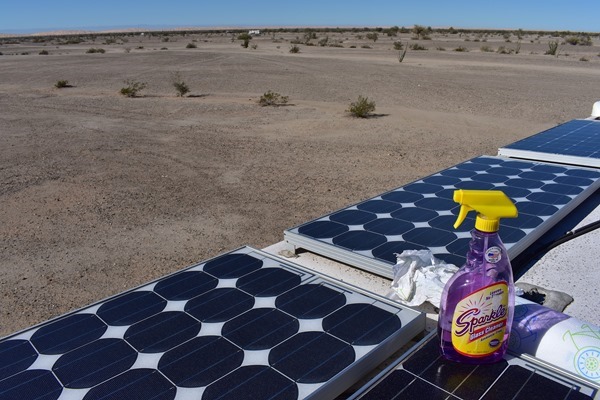 Compared to other years we have definitely noticed fewer boon-dockers wherever we go and it’s very noticeable here on Ogilbe Road west of Yuma.  From atop the rig this morning I’m guessing hardly a dozen RV’s could be seen scattered about across the desert floor.  Bonus:))

A FEW OF OUR FELLOW BOON-DOCKERS SCATTERED ABOUT 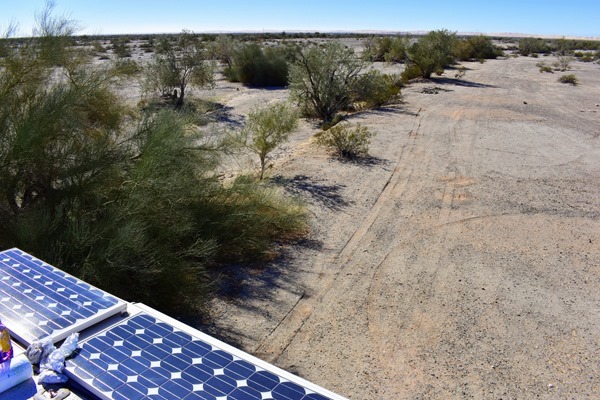 With a cool wind blowing from the northeast this afternoon I was able to set myself out a chair on the sunny southwest side of the coach, tip myself  back and finally enjoy some warm sunshine.  Can I say ‘hot’ even?  Well sure I can because it was:))

SPOTTED THESE 2 U.S. MARINES V-22 OSPREY AIRCRAFT HEADED OFF IN THE DIRECTION OF THE CHOCOLATE MOUNTAINS EAST OF NILAND 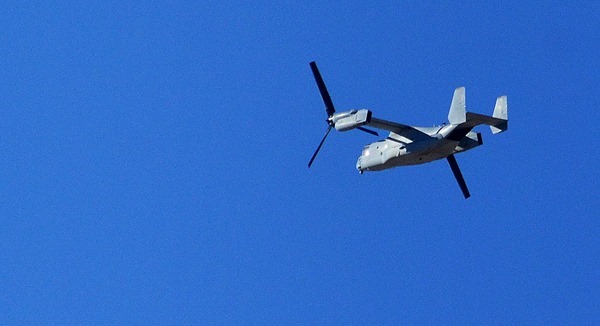 About 3:15 this afternoon I spotted a vehicle with running lights approaching and knew that to be Kelly returning from Yuma.  And ‘oh boy’ she had supper with her.  Something we haven’t had in years…..Chinese Food from the Panda Express in the Yuma Palms Mall.  We weren’t long in gobbling that all up.

It was about 4 when we heard a light tap at the door and by golly it was that wily Wandering Willy fella dropping by to see if we needed a hand hooking up that Tire Minder repeater I had talked about in Tuesday’s post.  Well we sure did and it didn’t take Bill long to figure out the best place for the repeater booster to go.  Also didn’t take him long to have a bin light taken apart, the booster wires spliced in, light put back together and ‘Walla’ the green booster light came on and the installation was done.   Our ‘Tire Minder’ monitoring system is now complete.  Sure is nice to have helpful handy friends and a big thanks to Bill for hooking that up for us today.  Bill is a fellow Canadian by the way who lives in British Columbia. 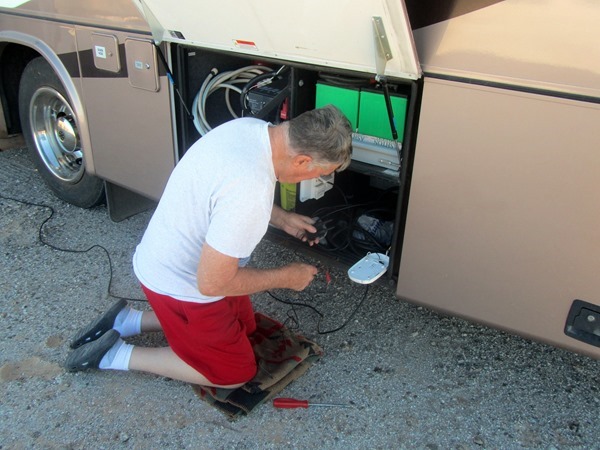 NEEDING SOME OF HIS OWN TOOLS BILL (aka WANDERING WILLY) SLIPPED OVER TO HIS RIG AND NOT ONLY CAME BACK WITH THE NEEDED TOOLS BUT SOME WARMER CLOTHES TO BOOT…..DESERT TEMPERATURES DROP VERY QUICKLY BY LATE AFTERNOON 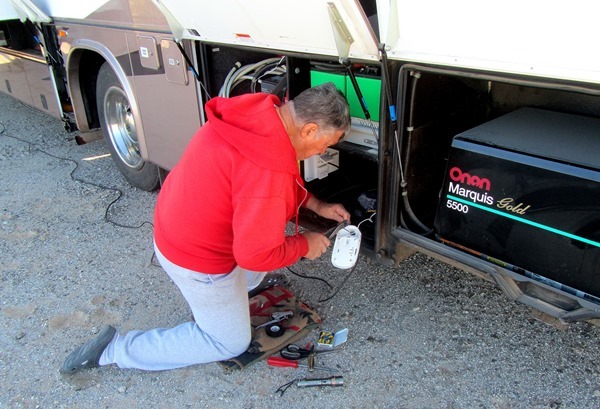 The more I read through my new camera manual the more pleasantly surprised I am at finding out all the things this Nikon D3400 can do.  I had no idea.  Definitely opens up a few new photo options for me…..if I can figure them out of course.  I am totally pleased with this camera so far.

The problem with the gene pool is that there is no lifeguard.

Experience is something you don't get until just after you need it.

A conscience is what hurts when all your other parts feel so good.

For every action, there is an equal and opposite criticism.

To steal ideas from one person is plagiarism; to steal from many is research.

Two wrongs are only the beginning.

Monday is an awful way to spend 1/7th of your life.

The sooner you fall behind, the more time you'll have to catch up.

A clear conscience is usually the sign of a bad memory.

If you must choose between two evils, pick the one you've never tried before.

Love may be blind, but marriage is a real eye-opener.

Borrow money from pessimists, they don't expect it back.

Half the people you know are below average.

Knock Knock
Who's there?
Heaven!
Heaven who?
Heaven seen you in ages!