HOLY COW I ACTUALLY SAW A MOVIE TODAY I LIKED 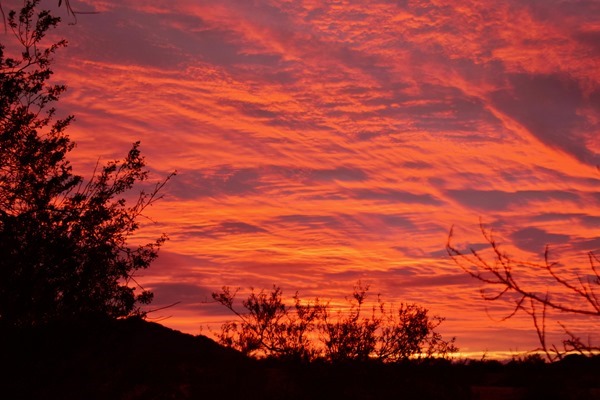 HAD US ANOTHER FIERY SUNRISE THIS MORNING

I think this is or has turned out to be the poorest weather here in the Southwest that we can remember since 2011 and I was reminded of that this morning when we woke up yet again to overcast skies!!  Disappointing to say the least.  But on a brighter note we ended the day in warm temperatures and sunshine:))

SEEN ON A ‘BUFFALO WINGS’ EATERY CLOSE TO THE THEATER

We decided to head into the Yuma Palms Mall again this time for the sole purpose of seeing a movie.  For me none of them sounded interesting so Kelly read out what each one was about and I decided on one of them because it said it had music in it.  Kelly chose the movie ‘Fences’ while I chose a movie I wasn’t expecting much from.  I chose LaLa Land. 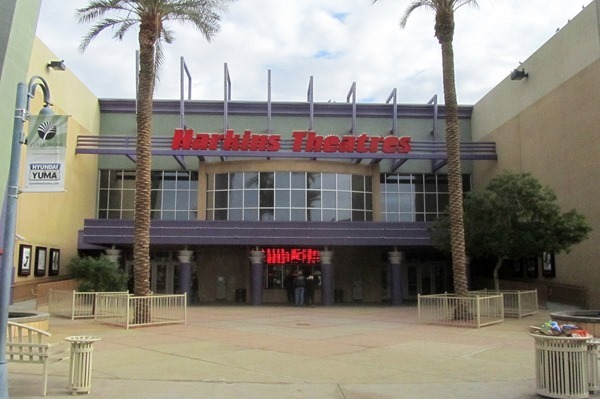 STANDING IN FRONT OF THE ‘HARKINS’ THEATER AT 9:30 THIS MORNING 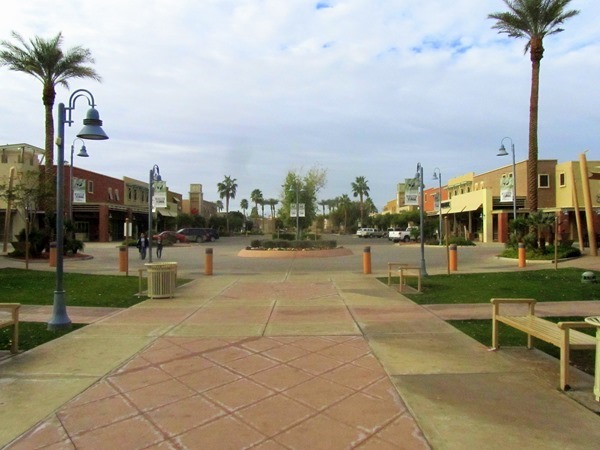 TURNED AROUND AND FACED DOWN THE MALL 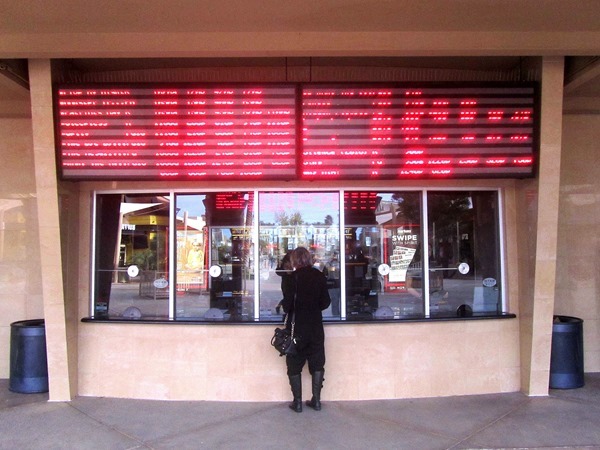 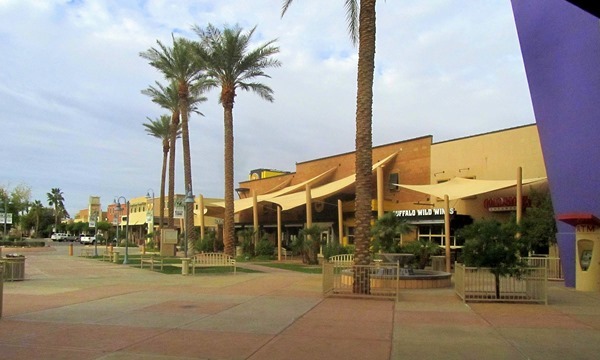 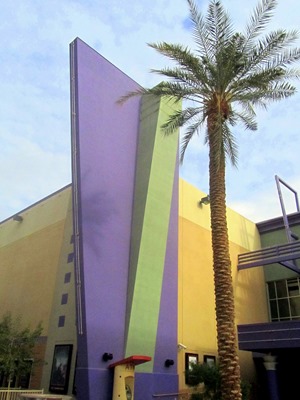 Like most everything else we like to get things done in the morning and going to the movies is no exception.  Kelly’s movie started at 9:40 and mine started at 10.  I so much love movie theater lobbies with all their creative colored lighting, fancy carpeting, big tall ceilings and darker painted walls.  Kelly headed off to her movie and I headed off to mine.  I was the only one in the theater up until the movie started and a woman came in with a barrel of popcorn and a pail full of what I guessed was soda pop.  She sat somewhere behind me and every once and a while it sounded like someone turned on a garburator back there somewhere. 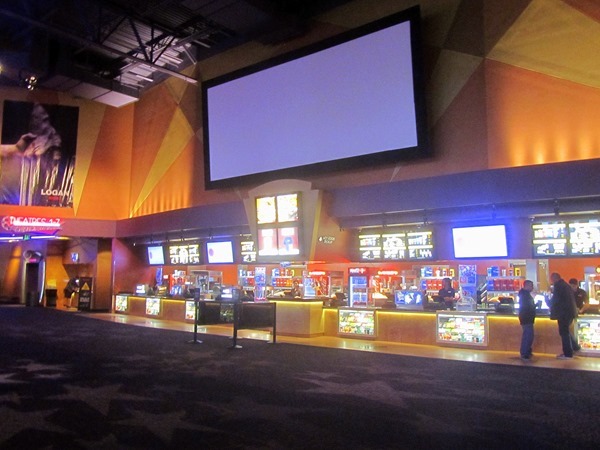 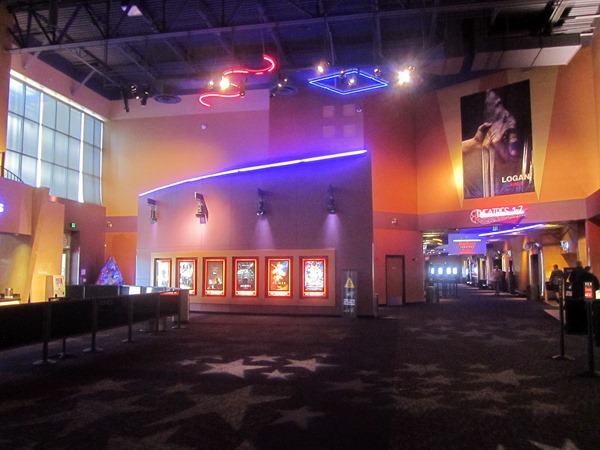 KELLY’S MOVIE WAS DOWN THAT HALL TO THE RIGHT 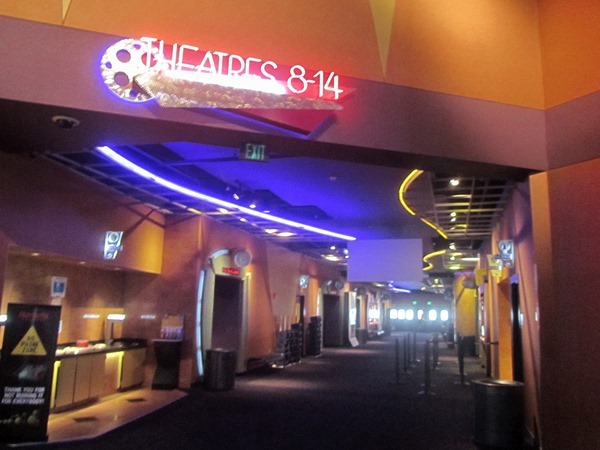 After wading through seemingly endless commercials and movie previews it was time for the main attraction.  One of the personal problems I have with movies is I view them with a very critical eye maybe like the late Roger Ebert or somebody but not as smart as those guys of course.  Right from the big opening musical dance number on a Los Angeles freeway I felt this movie just might have something special going for it.  The production and creative thinking behind the choreography of that opening scene was great and I wondered how many times they had to rehearse that scene just to get it right.  The acting in this movie was flawless.  The story line was easy for me to follow and that was a plus for me.  Too many movies lose me too quick with all their twists and turns and tangled plots and characters.  I’m not one much for romantic movies but this one was an exception.  When I leave a movie theater I like to feel uplifted and walk away with something inspiring to think about.  La La Land did this for me.  I liked the special effects of the 2 principle characters dancing through the Universe and especially liked a short musical number where the fella walks out onto a pier singing and whistling.  I liked all the music in this movie as well and always have a place in my heart for most any kind of piano music.  I grew up with a piano in the house which my Mother played.  This movie has shades of Fred Astaire and Ginger Rogers and the way big musicals were done years ago.  I looked for and liked the lighting, the direction, the cameral angles and the creative thought that went into each scene.  And I especially liked the way this movie ended.  An unspoken understanding between two star crossed lovers.  A smile, a nod of the head and it was done.  And how nice to finally be entertained in a feeling good way by a movie without the standard Hollywood violence for a change.  Imagine in this day and age a movie with no blood and gore, fiery explosions, foul language, mass destructions, violent and ridiculous nonsensical fight scenes or ridiculous super hero mutants saving or destroying the planet.  Two thumbs up for Lala Land.  Oh dear, am I finally showing some very late signs of actual maturity in these final aging stages of life.  Well I sure hope so……………..La La Land 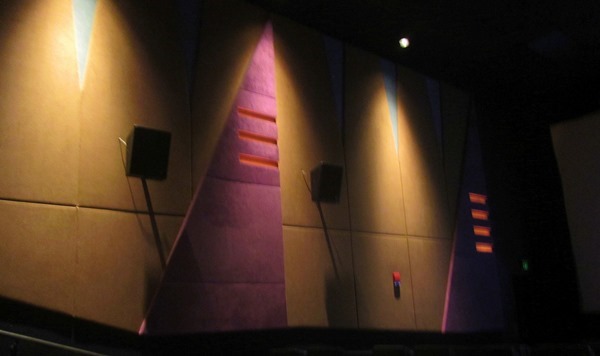 LOVE THE LIGHTING AND COLORS INSIDE THE THEATER ITSELF 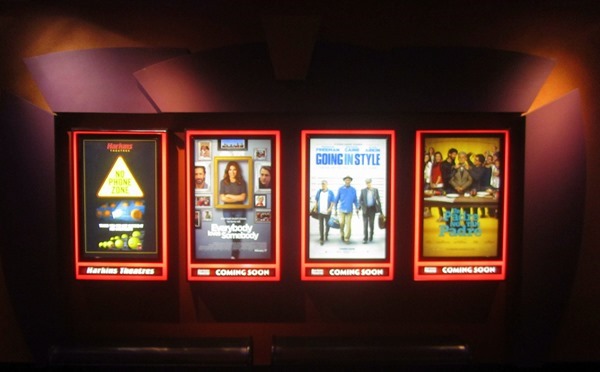 After the movies we both felt the need for feed so cruised around the Yuma Palms Mall checking out the options.  We knew most places were too expensive for us but when we spotted an IN-N-Out Burger we knew we were in luck.  Had been to one once before in Tucson a few years back just after I spent an overnighter in a Tucson hospital with a kidney stone attack.  Today’s In-N-Out burger was jam packed without a table in the place so we had to sit at a counter.  We both had double-double burgers and they were great.  So was the price.  When we left folks were lined up to the door.  Two thumbs up for In-N-Out Burger:)) 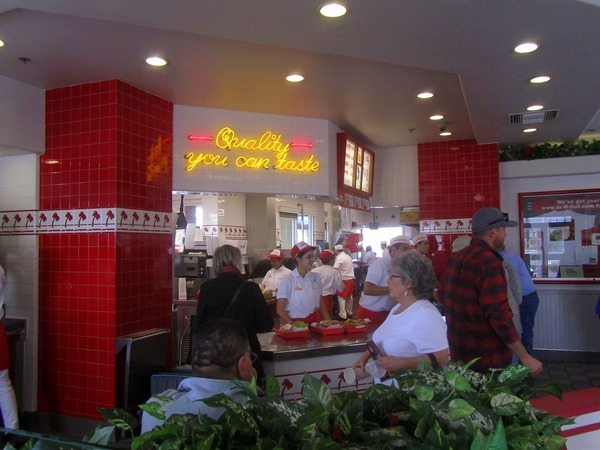 THAT’S KELLY UP THERE AT THE COUNTER

A few sunny breaks this afternoon as winds once again picked up.  We got up into the high 60’s if not low 70’s I think and that sure beats anything back home in Bayfield.  No matter how poor our weather may be here in the southwest sometimes it is always better than our northern winters back home this time of year. 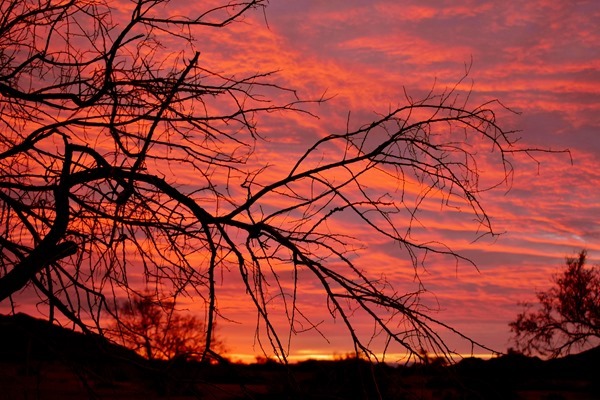 GROANER’S CORNER:(( There was a little boy in kindergarten. At the end of one cold winter day, when all the other children were leaving, the teacher found him crying, so she asked him what was wrong.  He sobbed, "I can't find my boots." The teacher looked around the classroom and saw a pair of boots. "Are these yours?"  "No, they're not mine," said the little boy, shaking his head.  The teacher and the boy searched all over the classroom for his boots.  Finally, the teacher gave up, "Are you SURE those boots are not yours?"  "I'm sure," the boy sobbed, "mine had snow on them."