FINALLY FOUND US SOME WARMER WEATHER IN SOUTHERN CALIFORNIA:))

WESTBOUND ON I-8 SOMEWHERE BETWEEN GILA BEND AND YUMA

A starry night sky for me is always a fascinating place made even more fascinating some nights by mysteriously unexplainable things going on.   Wednesday night was one of those nights where I stood watching 3 pairs of colored lights simultaneously in 3 different parts of the sky.  I heard a distant thunder yet knew it not to be thunder.  And several times a curious 2 second ‘Viruuuuuum’ sound somewhere to the north.  Worried??  No not at all because we were parked right at the edge of the huge Barry M Goldwater military range and strange things go on there all the time day or night.  F-16 fighter jets were overhead darting about among the stars so I figured those colored lights to be yellow flares from those jets or several other unknown military sources.  I have seen those flares before but not hanging in the air for so long and never in such perfect formations of two in completely different areas of the sky.  The thunder like sound was obviously munitions going off in the desert somewhere and the ‘Viruuuuumm’ sound which I’ve heard before in this area I believe to be the firing of a 30 mm Hydraulically Driven 7 Barrel Gatling Gun.  Yes indeed night skies can be a fascinating place here in southern Arizona and that’s just one of the many things I like about it. 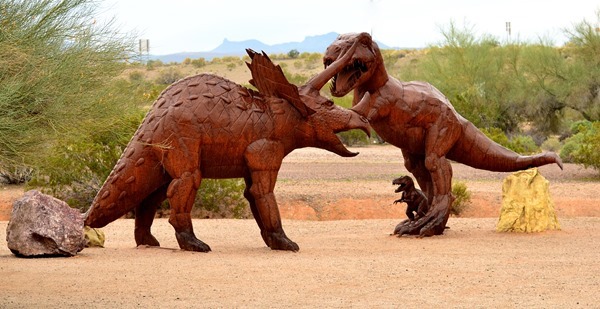 SPOTTED THESE GUYS DUKING IT UP IN GILA BEND THIS MORNING

Also identifiable about 8 hours later was a familiar sound on our Motorhome’s roof.  The lite pitter-patter of raindrops is unmistakable and the predicted rains were upon us for a short time and then were gone. 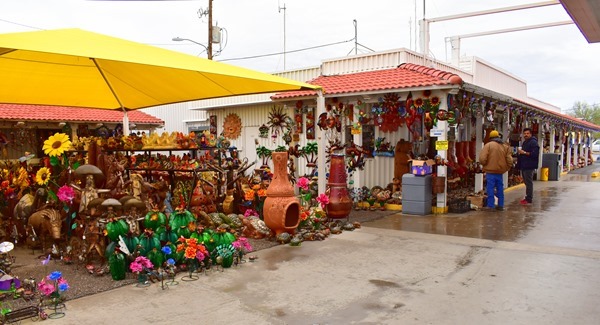 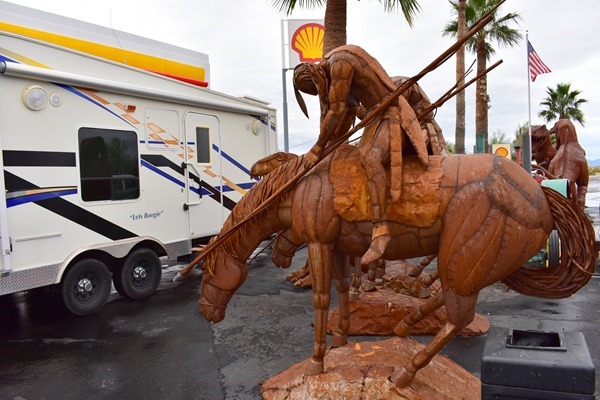 In case you missed Pat’s comment on my Wednesday night post their dog’s name is Kumori and that Chimney Sweep duo at their house were a married couple.  Thanks Pat:)) 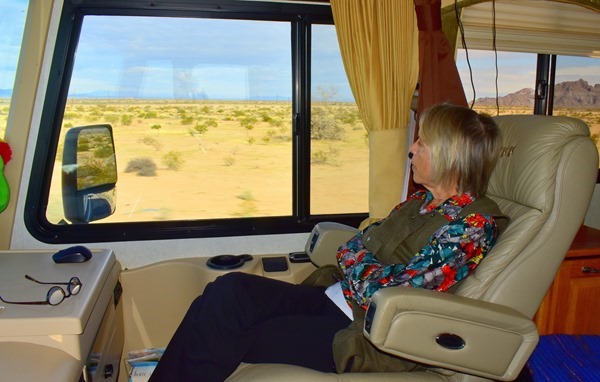 Due to a completely overcast sky and a lower altitude than Sierra Vista it was nice not to have ice on the roof this morning.  It was just getting light with a slight drizzle when we had the big wheels rolling along an old black bumpity road which I was quick to name, ‘The Old Road of 10 Million Road Patches’.  It was only maybe a half mile back to highway 85 where we turned north and headed off to Gila Bend.  At Interstate 8 we turned east.  East!?!?  Yep, went to the eastern Gila Bend entrance and swung off there into a Shell Station on the north side.  Dumped our tanks, took on some water, topped off the propane tank and threw a little gas into the Jeep bringing the gas gauge up to half.  There is a Subway sandwich shop there so grabbed a bite to eat before climbing back on I-8 this time heading West.

About 30 miles west of Gila Bend we drove out from under the cloud cover into big blue skies and welcoming sunshine.  And of course sunshine is always good for whatever it is that you think ails ya.  An uneventful drive to Yuma with the Motorhome running perfect.  And we’re not doing so bad ourselves either. 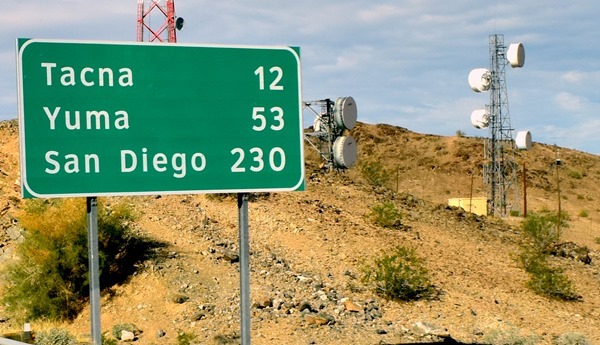 It was Ogilbe Road we were headed for so breezed right through that Yuma town and out the other side into California.  Lots of room out here in these wide open spaces so it was no problem for us to find a spot to camp for a bit.  But only for a bit.  We are in search of new places to go and new things to do.

MOTORING THROUGH THE MOUNTAINS

ROLLING THROUGH YUMA AND RIGHT ON OUT THE OTHER SIDE

WE’RE IN THE AGRICULTURE BELT AGAIN

Wind and rain are predicted over the next couple days so we were careful in setting up the rig so as to have it’s nose facing the predicted wind heading up out of the South and Southwest.  We always try to use the Motorhome and Jeep to shelter our satellite dish from the wind gusts as well. 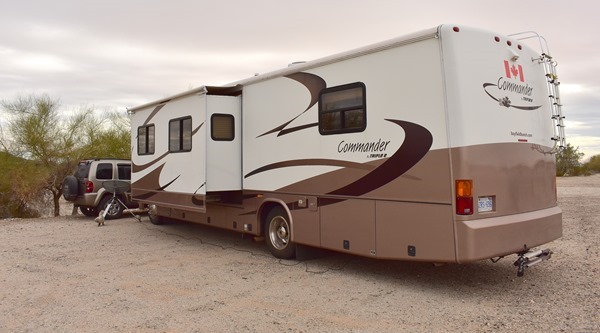 WE ARE NOSED IN BEHIND A CLUMP OF PALO VERDE TREES 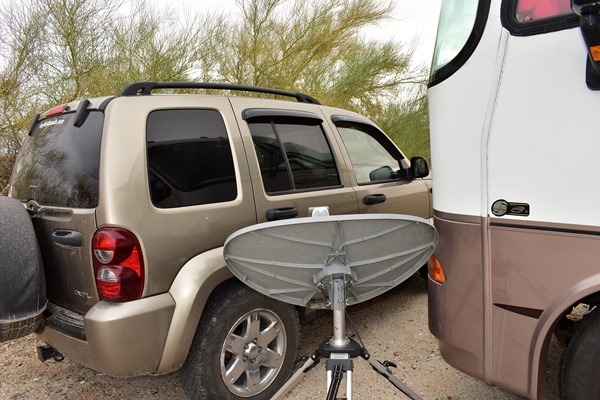 There are many things I have always and still do enjoy about RV travels and one of those things is simply being on the move.  With my constant restless nature I am not one for sitting in one spot for prolonged periods of time.  I am always happy to be changing locations keeping the RV experience alive, challenging and changing.   I have always been a person of change in many respects and wouldn’t have it any other way.  Boredom is my constant nemesis and I have to always be on the ball keeping one step ahead of it or I can all too easily slide into a depression.  It seems the older I get the more restless I become and for me a week in one spot seems like a really long time…………….. 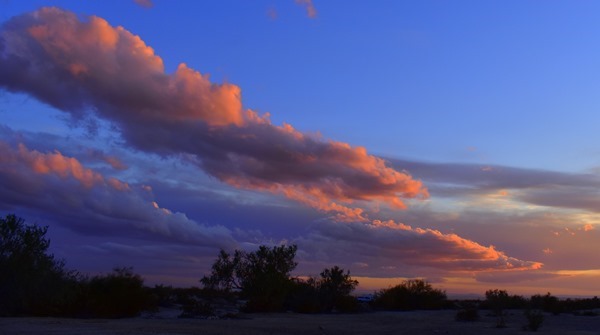 And I just noticed today our Bayfield Bunch blog has passed the 5 million page views mark.  Who would have ever thunk it eh.  Certainly not me…………………….. 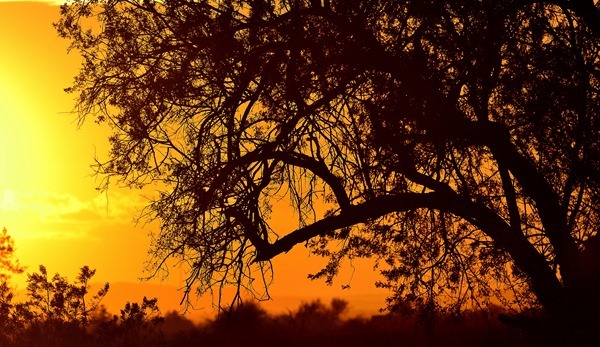 GROANER’S CORNER:(( A guy who had forgotten the dates for a number of his friends' and relatives' birthdays and anniversaries, decided to compile a list on the computer and have the dates highlighted on screen when the machine was turned on.  He went to a number of computer stores to find a software program that would do the job but had no luck at the first few. Finally, he found one where the clerk seemed experienced. "Can you recommend something that will remind me of birthdays and anniversaries?" the guy asked. "Have you tried a wife?" the clerk responded.

Q: what is the brunette doing when she holds her hands tightly over her ears? A: Trying to hold onto a thought.

The maharajah of an Indian Province issued a royal decree. He ordered that no one was to kill any wild animals while he was the country's leader. The decree was honored until there were so many Bengal Tigers running loose that the people revolted and threw the maharajah from power. This is the first known instance of the reign being called on account of the game.