PHEEBS AND I TOOK OURSELVES OUT TO VULTURE PEAK THIS MORNING 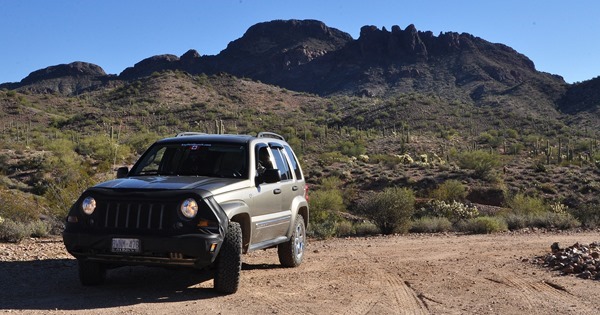 An icy cold North wind came in the night and blew all the clouds out of town leaving us with plenty of sunshine this morning.  Although the air was cold it wasn’t long before the first few warming rays began to make themselves felt. 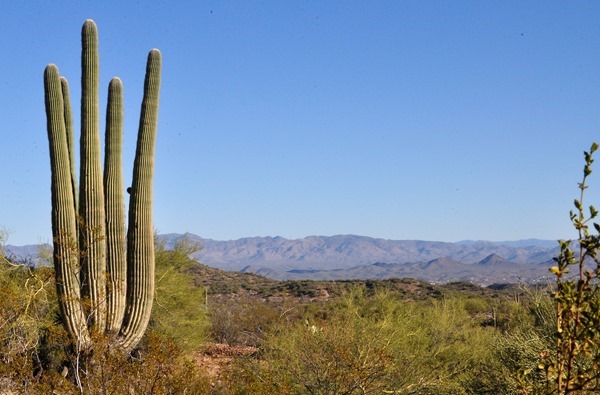 Loaded up the little Bugsy Buns and we were out the door and into the Jeep shortly after 8.  We weren’t long in getting the heater cranked up. Hadn’t been out to the Vulture Peak area since we’ve been here so we made tracks for Wickenburg.  A coffee and muffin at the ‘Pie Cabinet’ and off we headed out Vulture Mine Road.  The coffee was good but I’ll make no comment on the Coffee Cake muffin.

PHEEBS IN THE FOREGROUND WITH VULTURE PEAK IN THE BACKGROUND

THAT CONE SHAPE ON THE LEFT IS CALLED ‘ROUND MOUNTAIN’ AND IS BELIEVED TO BE THE CENTER CONE OF A LONG EXTINCT VOLCANO I THINK….WICKENBURG LIES IN A VALLEY TO THE RIGHT

I was interested in checking out a few boondocking sites on the south side of Vulture Mine Roads so turned left into the desert on Vulture Peak Road.  As expected the hard packed sand and gravel rocky road was a bit on the rough side but still doable with an RV if one took it slow.  Nobody on your old site Peter. 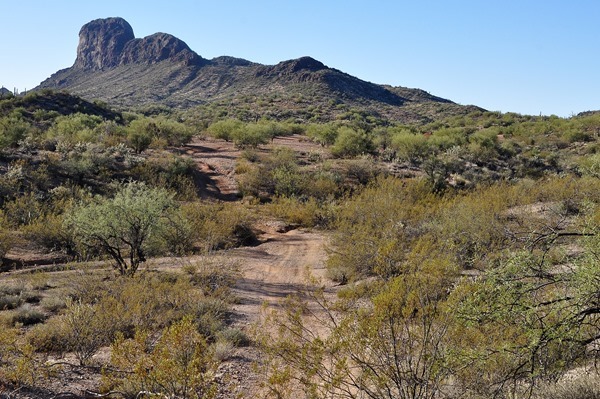 We continued along this road for a short distance before stopping for a leg stretch at a turn around spot.  Nice area and we had been here half a dozen times since March of 2012. 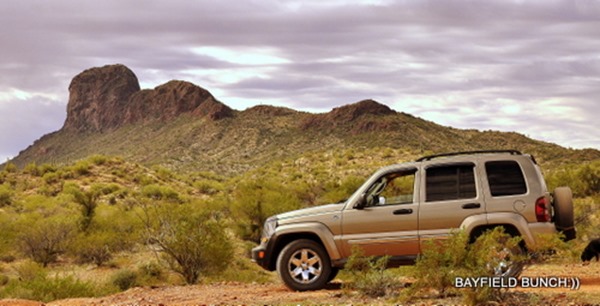 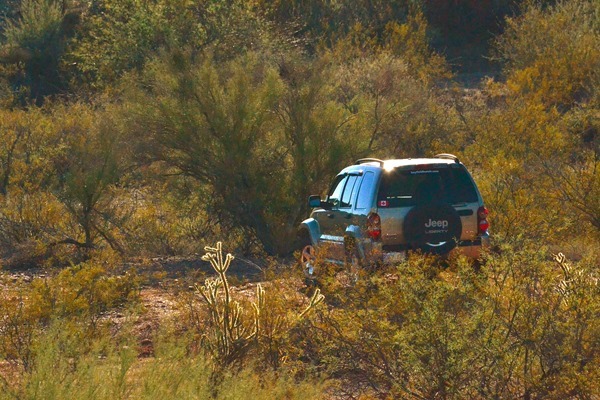 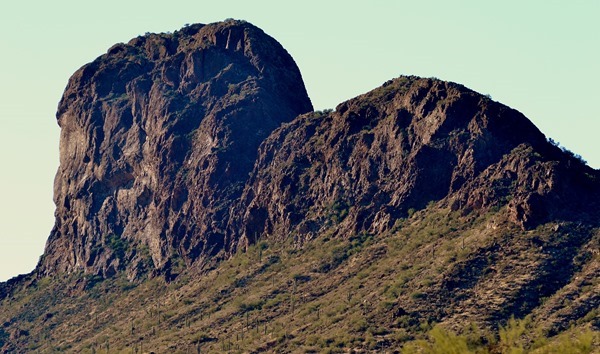 A CLOSER LOOK AT VULTURE PEAK FROM THE NORTHEAST SIDE

While out for a short walk I noticed a pink Jeep Wrangler come up the road then head off down a Jeep trail near where Libby was parked.  When we got back to the Jeep we headed off down the same trail that pink Jeep had taken.  Saw a few familiar spots so knew I had driven down that stretch before but we followed the Jeep tracks further into an area where I knew we hadn’t been.  I was hoping the road would lead in closer to the base of Vulture Peak which it might have but we came across a ‘cowboy gate’ and decided to turn around.  I think next time we’ll maybe slip through that gate and see where it takes us. 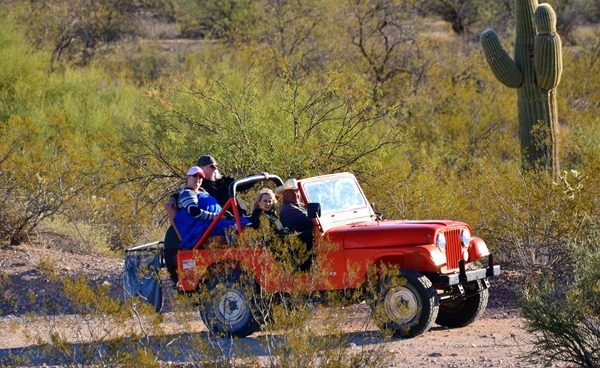 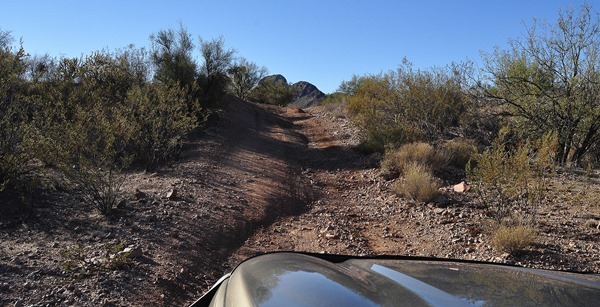 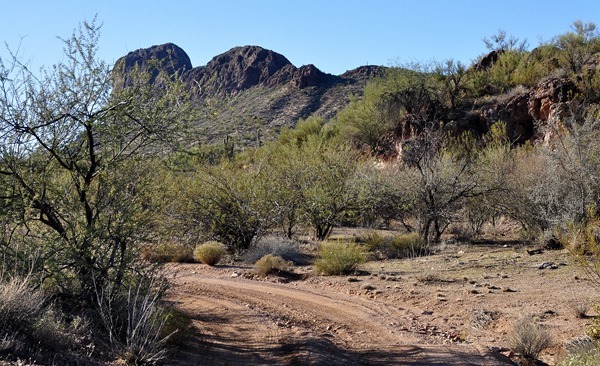 Back to Vulture Mine Road we turned left and headed a few miles further south then turned around at the Vulture Peak trailhead parking area.  Some nice boondocking sites here but you can’t let your dog run free because this area is heavily laced with Teddy Bear Chollas and you don’t want your dog getting into those things or it could mean a painful trip to the Vet.  There were about a dozen RV’s scattered about with most of them having towed trailers in with ATV’s on board.  I’m sure all these folks will be on the roads and trails leading to the base of Vulture Peak.  Kelly and I have hiked the trail and walked the road which leads to a parking area on the way to the peak.  If I had had an ATV this is one of the treks I would have liked to do. 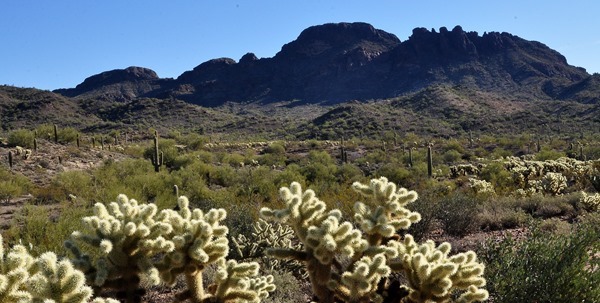 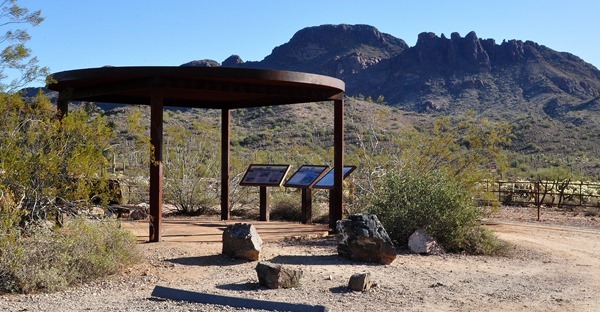 From the trailhead we headed back to Vulture Mine Road and turned right in the direction of Wickenburg.  Toyed with the idea of heading over into Box Canyon but figured we’d save that for another day.  Slipped East into an through Wickenburg then swung North for Congress.  We were back home before 11 and oh how nice it was to be out for a drive this morning after hanging around the house for the last 3 days.

Winds died down in the afternoon and with temperatures around 65F I actually felt a nice touch of warmth in the air.  With sunshine streaming through the Motorhomes two big living room windows and skylight the rig was toasty enough inside for me to spend time cleaning up the front cockpit area and getting things ship-shape for possible travel soon.  Although our rig is nearly 15 years old I am always impressed with the Amish craftsmanship that went into it.  And it also shows how well our Winkler Manitoba Canadian made Triple E Commander had been so exceptionally well maintained by it’s previous owner since new.  Many extras and innovations.  Yes we did have some problems our first couple years but that’s all behind us now.  Fingers crossed for trouble free future travels………………. 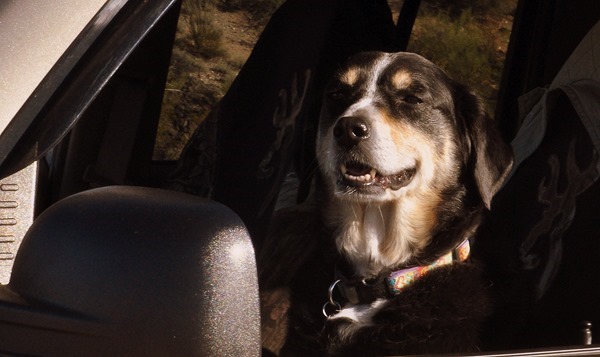 A tramp knocked on the door of the inn known as St. George and the Dragon. The landlady answered the door.  The tramp said, “Could you give a poor man something to eat?”  "No,” said the woman, slamming the door in his face.
He knocked again and said, “Could I have a few words with George?”
Posted by Al Bossence at 12/03/2016