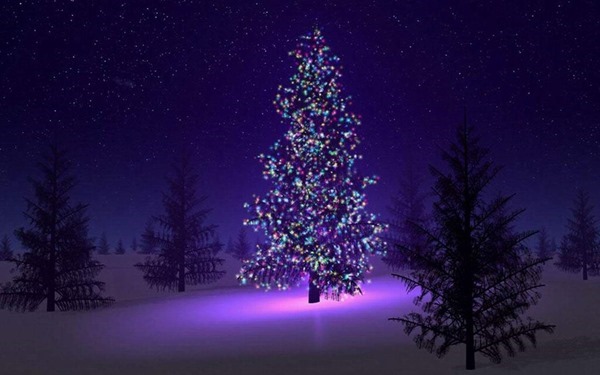 With clear starry skies overhead I fell asleep Friday night with sugar plums dancing in my head and thoughts of a sunny Saturday morning coming up.  Three hours later those dreams were dashed when I was jolted out of my dream sleep by gusting Borrego winds roaring up the canyon and plowing into the side of our Motorhome.  And what was that sound on the roof I could hear??  I knew it was a day too early for the lite clomping of reindeer hoofs so could only be one other thing.  Rain!!  Dammit anyway!!!!

It was 1 a.m. and we were both up and awake debating whether to pull our slides in.   Figured we’d been in worse winds here so left the slides out despite the noise our slide toppers were making and the banshee howls from winds whipping around and through the many corners and crevices on our coach caused by aerials, roof air conditioners, awning arms, roof vents and caps, outside mirrors, and rear ladder, etc. etc.  With blowing winds catching all those things at the same time it sets up an amplified sound inside an RV giving the occupants the impression the winds are much worse than they actually are.  Kind of like being inside one of Gene Krupas drums while he’s hammering out Swing, Swing, Swing.  Sometime during the night those big winds finally subsided………..but it didn’t last. 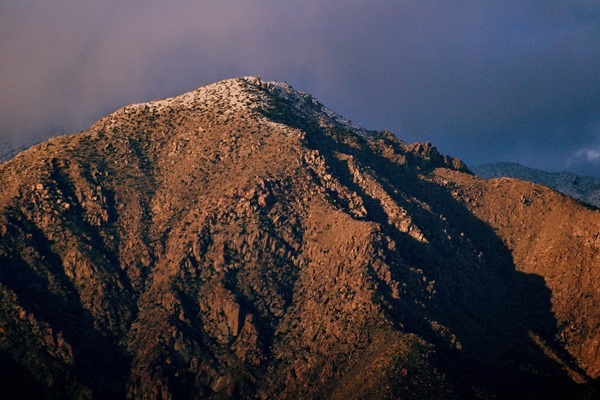 It was 7:30 a.m. and from my recliners position I can look straight out through our big windshield.  Could see a smattering of snow on some of the peaks in the San Ysidro mountains behind Borrego Springs.  Could also see some patches of blue sky so quickly crossed my fingers, legs and eyes in hopes that clearing trend would continue.  Well it did and it didn’t. 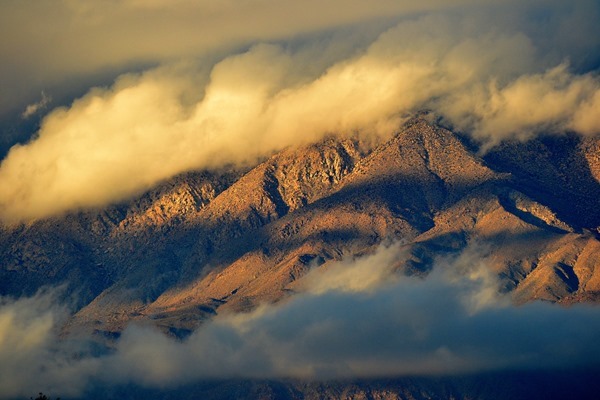 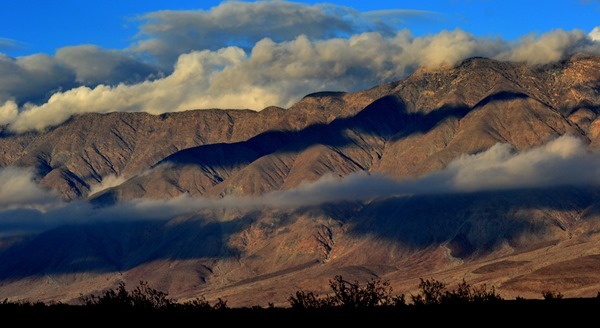 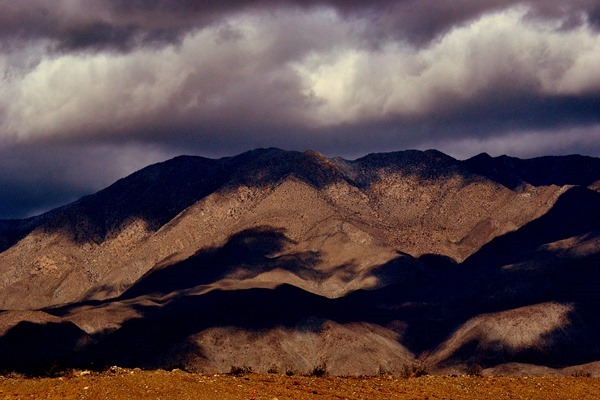 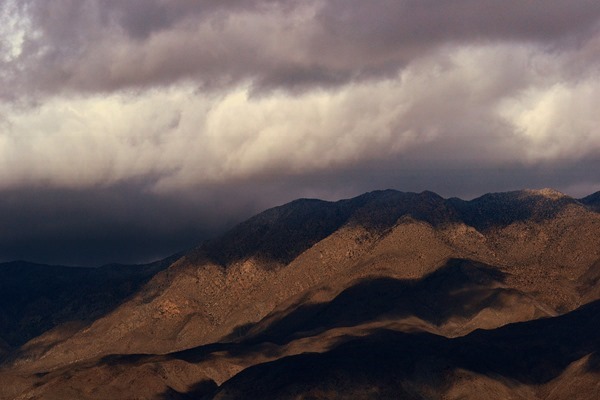 THE CLOUD MONKEY HAS NOW MORPHED INTO A LEAPING PANTHER

Pheebs and I started our day off wrestling over a Pumpkin Muffin from Calicos.  I was winning until Kelly stepped in and disqualified me.  She said I was hiding behind the couch hoarding the muffin.  Don’t you believe it folks, I was back there looking for my socks and just happened to have the muffin in my pajama pocket………….. 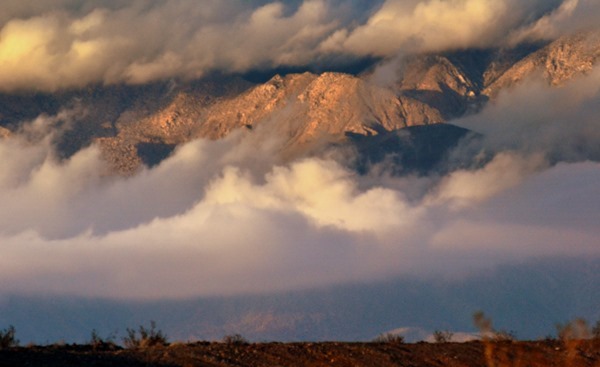 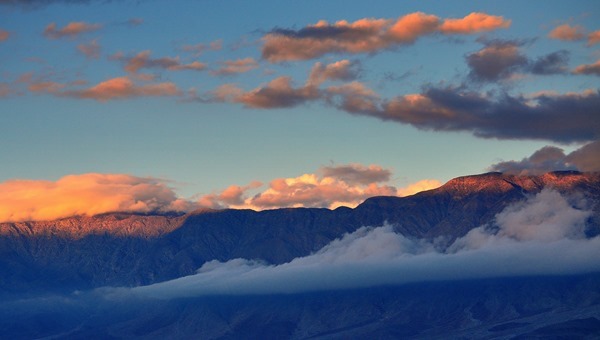 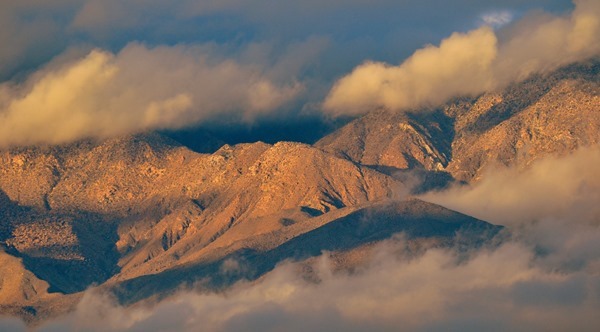 Double walk for Pheebs this morning with Kelly taking her out first and me taking her out again an hour later when it was sunnier and not quite as cold.  It was 9 a.m. and we were once again basking in bright sunshine but the Borrego wind gusts had returned draining the sun’s warmth out of the air so it was my lined nylon winter jacket I was wearing for our walk.  We followed a wash around the southern tip of Coyote Mountain and walked about half way to Peg Leg Smith's and back.  Despite the cold wind it was nice and toasty in the rig with Old Sol beaming through the windows. 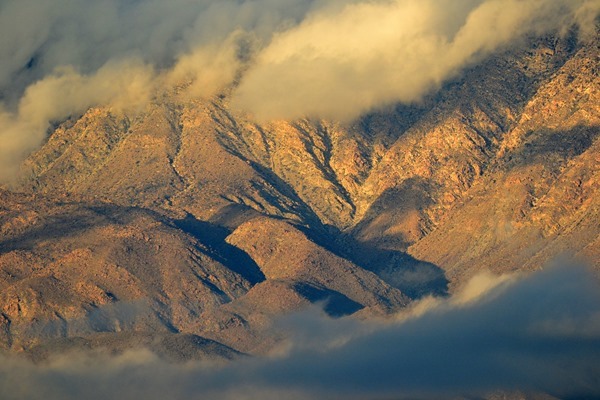 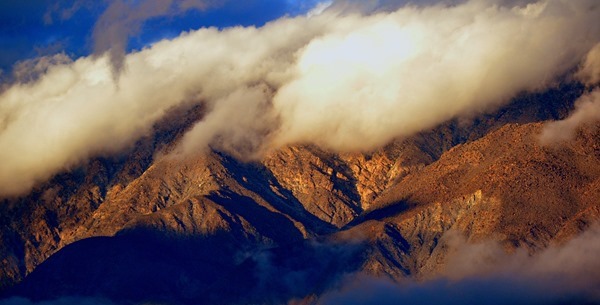 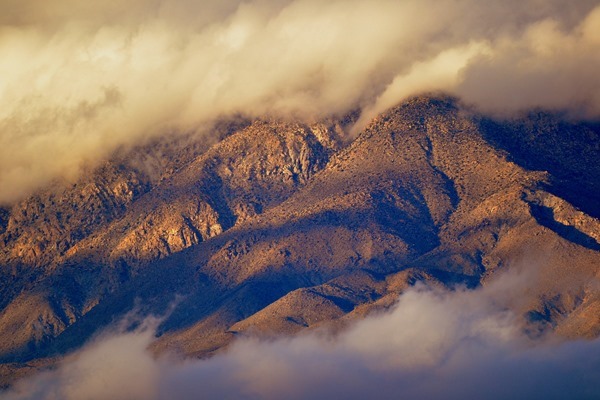 Our Verizon internet signal has not been the best since arriving here a few days ago and an example of that is the length of time my blog takes to publish each night.  Friday night I hit the ‘Publish’ button at 8:15 California time and at 10:15 it was still publishing.  I finally fell asleep sometime after that so it published in the night but I don’t know when except judging by the date it was after midnight. 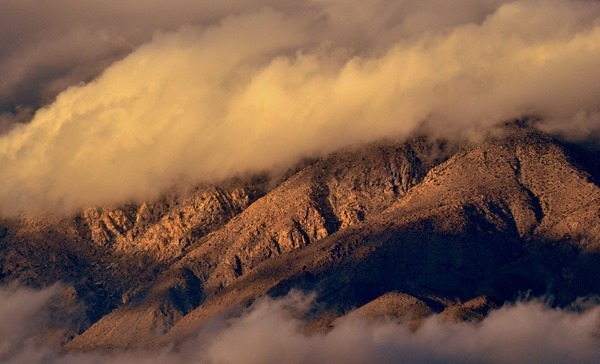 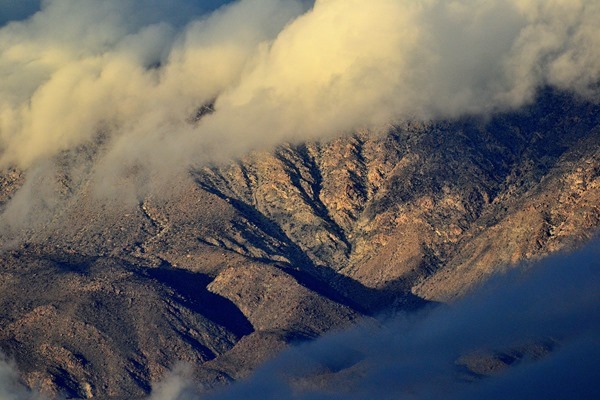 Aside from Kelly watching a few of her favorite night time TV show I’m happy to say we have not been watching our TV much.  In fact hardly at all.  Don’t know what’s going on in the world and don’t care.  Well I do care but for the time being with where we are and what we’re doing……..I really don’t care!! 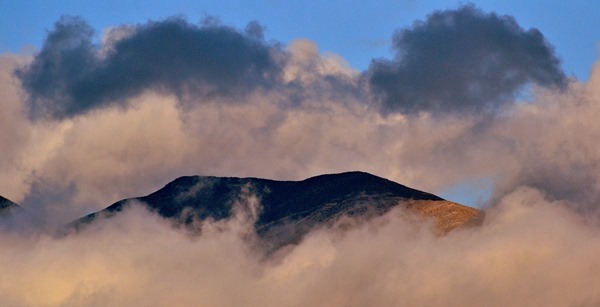 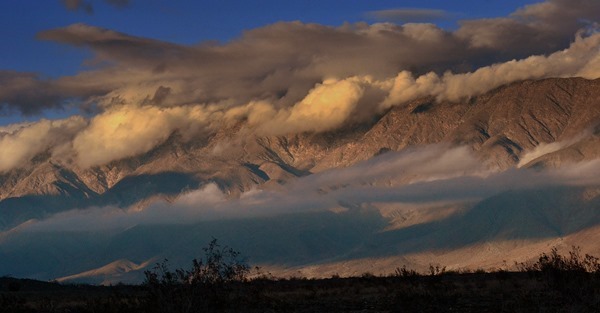 We had planned on heading off out into the Badlands today with the Jeep but after recent overnight rains again we figured there may be a bit of water running in some of the washes making the sand too soft.  Don’t wanna get bogged down in soft sand or mud anywhere out in the boonies. 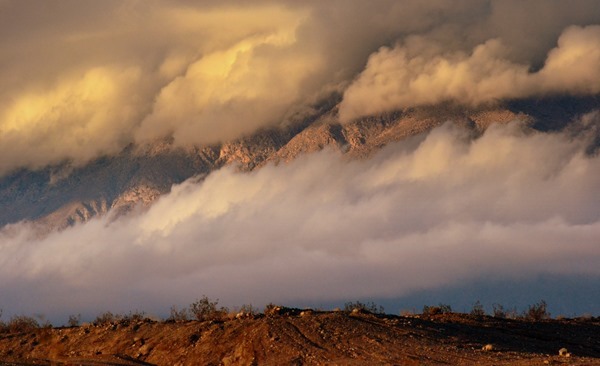 My Kindle is my only reading source and without it I would really be up the creek without the proverbial paddle and there I suddenly was late Friday night, paddleless up the river.  My swiping pages wouldn’t turn forward or back.  My screen was seized and no matter what I tried I just seemed to make matters worse losing not only the page I was on but the whole book itself.  Luckily it wasn’t a warm night and I was sitting here with the door open or my Kindle could very easily have become a permanent part of the desert landscape.  Kelly was already in bed but said she would have a look at it in the morning.  When Pheebs and I returned from our walk earlier today she was sitting with it in her lap calmly pecking away at he screen like a velvet fingered Woodpecker.  A short time later she handed me the Kindle and said, ‘here ya go.’  My book was not only back but she even had it on the page I had been on.  I asked her how she fixed it.  Two words came back…….’Re-started it’.  I didn’t even know it could be started in the first place.  I wonder if the home has a nice bed by the window for me. 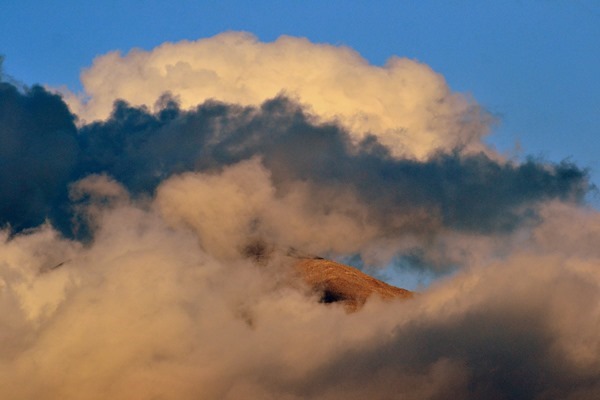 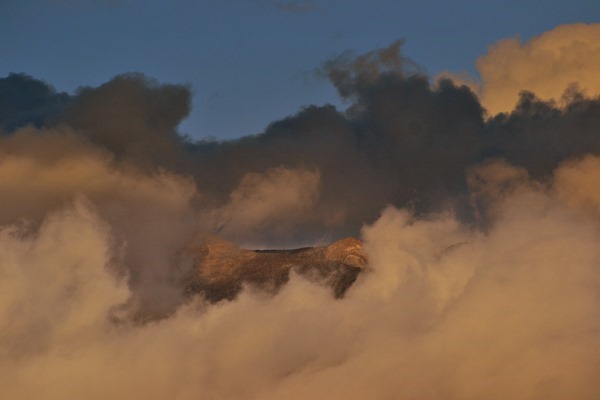 I think it was a combination of a poor night’s sleep and today’s cold gusting winds with driving flecks of occasional rain that kinda discouraged us from going anywhere.  Had thought about heading to Julian high up in the southern end of California’s Volcan Mountains about an hours drive out of San Diego but seeing snow in the San Ysidros this morning we knew from experience there would most likely be icy mountain roads and snow in Julian.  And a good likelihood the town would be shrouded in a cold damp fog as well.  Julian is also the final resting place of Marshall South and you can read my post about finally locating his grave on January 3rd, 2009 by clicking a link in this post …..Marshal South, Ghost Mountain, The Julian Cemetery, And Director John McDonald.  I may or may not have more to say about Marshal South’s homestead atop Ghost Mountain in Sunday night’s post:)) 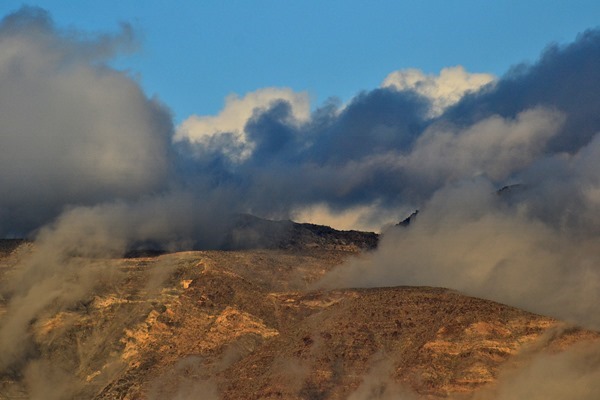 One year ago today we also woke up at the Clark Dry Lake Bed right here 3 or 4 miles northeast of Borrego Springs on the west side of highway S22.  We were a short distance in on Rockhouse Road just off the highway.  We were at the ‘Solar Oven’ site which fellow Borrego boon-dockers may very well know about.  Last year we arrived in Borrego Springs on December 18th and stayed until December 24th and here’s the kicker.  The reason we left was because of the relentless Borrego winds.  We had had 2 poor sleep nights and with even stronger winds predicted for Christmas Eve and Christmas Day we hightailed it out of here fast as we could for Congress and home the day before Christmas.  No hightailing it home now anymore so we’re here until we leave.  It’s a different mindset we work with now and I like the fact we just can’t pack up and go home anymore just because the weather is not to our liking or AL stubbed his toe on rock.

GROANER’S CORNER:(( According to the Alaska Department of Fish and Game, while both male and female reindeer grow antlers in the summer each year, male reindeer drop their antlers at the beginning of winter, usually late November to mid-December.  Female reindeer retain their antlers till after they give birth in the spring. Therefore, according to EVERY historical rendition depicting Santa's reindeer, EVERY single one of them, from Rudolph to Blitzen, had to be a girl.  We should have known... ONLY women would be able to drag a fat man in a red velvet suit all around the world in one night and not get lost.

Will: Where do snowmen keep their money?
Bill: Beats me.
Will: In a snow bank.

Alex was five; all his Christmas presents were always signed, 'from Father Christmas.'  A little while after Alex had opened all his presents on Christmas morning, we became aware that he was looking quite down in the mouth for no obvious reason.  'What's the matter, Al?'  I asked. 'Ummmm, 'replied Alex slowly, 'I really hoped that you and Mommy would give me something for Christmas too.'

Lee, A seven-year-old boy, was asked to say thanks for the Christmas dinner.  The family members bowed their heads in expectation.  Lee began his prayer, thanking God for his Mommy, Daddy, brothers, sister, Grandma, and all his aunts and uncles. Then he began to thank God for the food.  He gave thanks for the turkey, the stuffing, the Christmas pudding, even the cranberry sauce. Then lee paused, and everyone waited ... and waited.  After a long silence, the young fellow looked up at his mother and asked, "If I thank God for the Brussels sprouts, won't he know that I'm lying?"