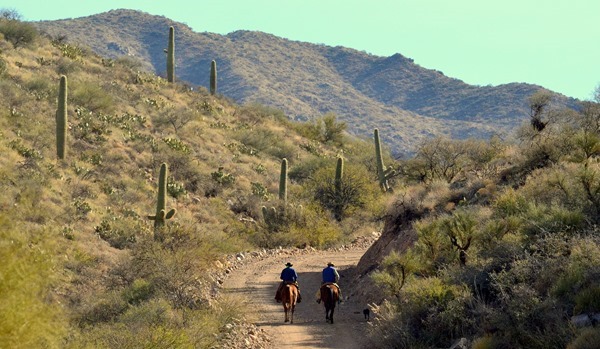 COWBOYS IN THE DESERT

Yaaaaay, a sunny day with milder temps in the low to mid 60’s.  Bonus.  About the only thing I had in mind regarding a Jeep ride destination for Pheebs and I this morning was a coffee at Wickenburg’s McDonalds so without further adieu we rolled out the driveway and headed south.

Sitting in McDonald’s parking lot sipping a  hot coffee and sharing a Burrito with Pheebs I couldn’t seem to get myself interested in yet again doing the same old too familiar desert road route out and around the east side of Wickenburg so we headed south on Constellation Road and just kept going for about 10 miles.

HEY PARDNER WHERE’S YOUR COWBOY HAT OVER THERE EH 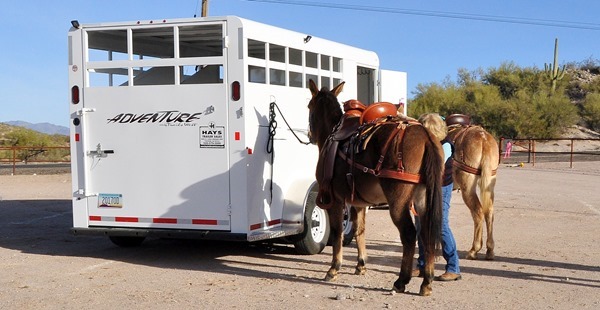 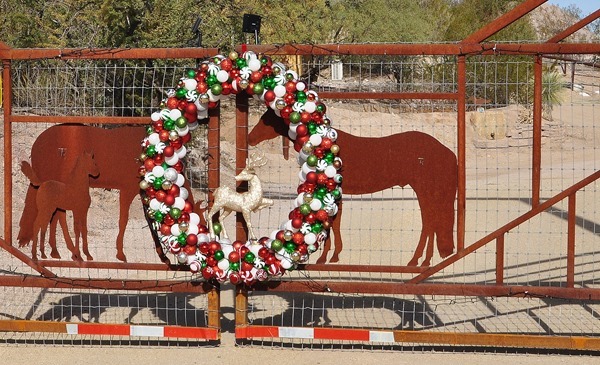 This was not a new stretch of dusty old road for us, in fact it brought back pleasant memories of maybe half a dozen times we’ve driven this stretch with the two very first times being the most enjoyably memorable.  Fellow RV’ers at the time Jim and Bev leading the way in their Jeep Wrangler led us through these winding hills and mountains on two different occasions.  A GREAT JEEP TOUR THROUGH GOLD COUNTRY was the first time.  On the second trip Kelly’s brother Peter and wife Leslie were with us in our Wrangler as Jim and Bev led our little 2 Jeep convoy to Castle Hot Springs near Lake Pleasant north of Phoenix.  Jim and Bev now live permanently way up there in that Idaho place somewhere north of Utah.  Mighty fine folks them two:)) 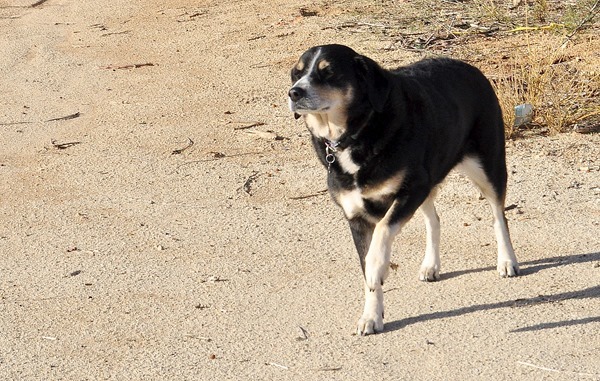 NOTICE PHEEBS EARS DOWN AND BACK, NOTICE SHE IS HOLDING HER PAW UP, NOTICE THE BURR STICKING OUT…..I HAD TO GET THAT ONE OUT WITH MY TWEEZERS WHICH I ALWAYS CARRY IN MY POCKET HERE IN THE SOUTHWEST

This morning Pheebs and I just kinda flopped ourselves slowly along taking in all the marvelous desert scenery with a few stops along the way to take a couple photos and grab ourselves a leg stretch.  Encountered a few ATV’ers, a couple fellas on horseback, maybe 3 other Jeeps and half a dozen pick-up trucks with one pulling a long horse trailer.  I met the feller towing the long horse trailer on a tight curve and we smiled and waved and nodded a couple ‘Howdies’ as we edged and rattled on by each other.  Well I wasn’t doing much rattling but his old truck and trailer sure were. 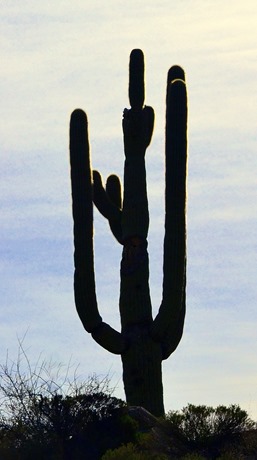 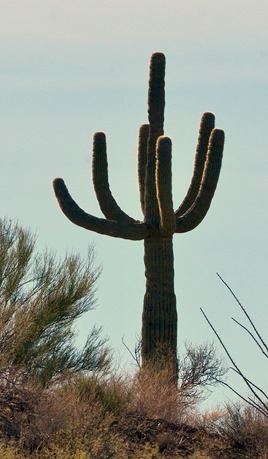 THE ONLY COW I SAW IN THE DESERT THIS MORNING

Think it was around 10:30 when I figured we had gone about far enough so we found us a turn around spot and headed back towards Wickenburg.  When we leave this area soon I will sure be taking a lot of pleasant morning drive memories with me.  With a long slow trail of desert dust hanging in the still air behind us we were soon dropping down out of the hills into the south end of picture postcard Wickenburg.  Hung a right turn onto highway 93, blew by McDonalds, sling-shotted ourselves around Wickenburg’s 3 round-a-bouts and rolled into our Congress driveway sometime before noon. 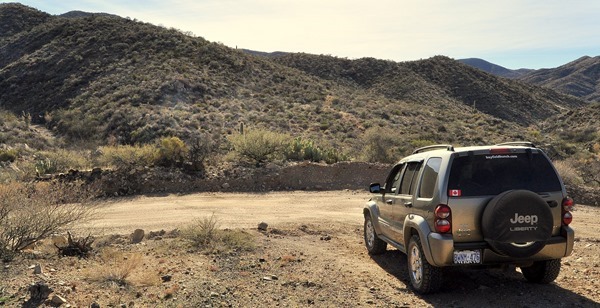 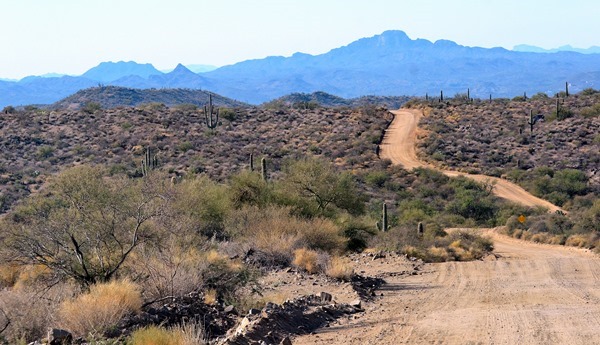 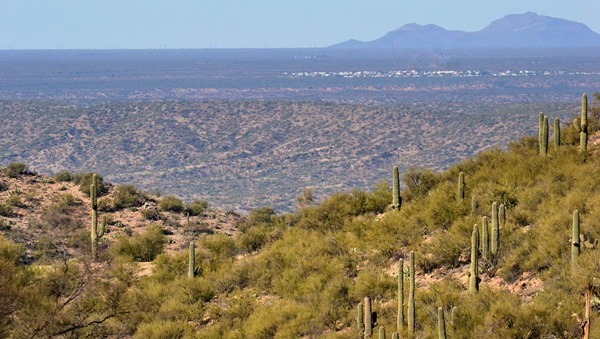 We had another bunch of stuff gathered up so we busied ourselves organizing, re-organizing and loading the rig’s 6 basement storage compartments earlier this afternoon.  Anything slated for Bayfield has to go in first so that we are not stumbling over it for the next three and a half months while boon-docking our way around the Southwest again.  So far so good and everything is fitting in nicely. 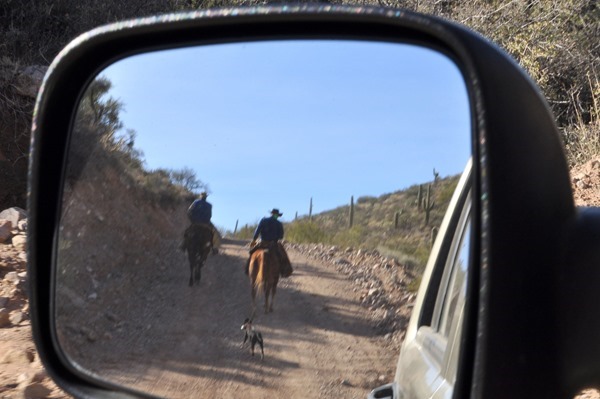 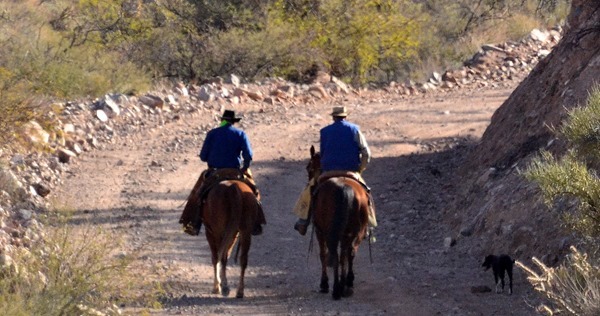 WHEN THEY WERE FAR ENOUGH ALONG AND I DIDN’T FIGURE THEY WOULD LOOK BACK I STOPPED AND HOPPED OUT OF THE JEEP TAKING A COUPLE MORE PICS, THIS ONE AND THE FIRST ONE IN THIS POST 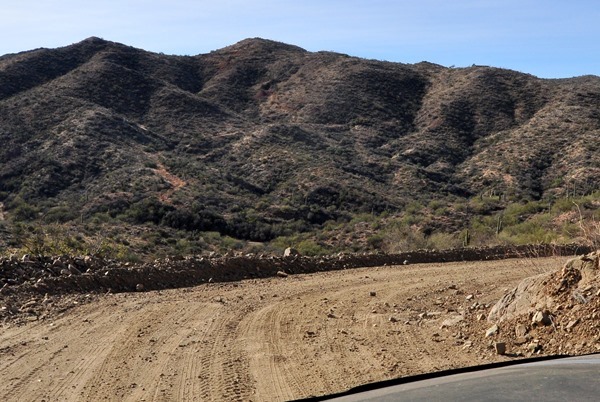 Fellow RV’ers Renee and Dave from North Ranch dropped in to see us this afternoon.  Renee had come across our blog years ago and we finally got to meet them when they bought themselves a winter place in North Ranch awhile back.  They also have summer property in New Mexico southwest of Albuquerque.  Nice folks these two:)) 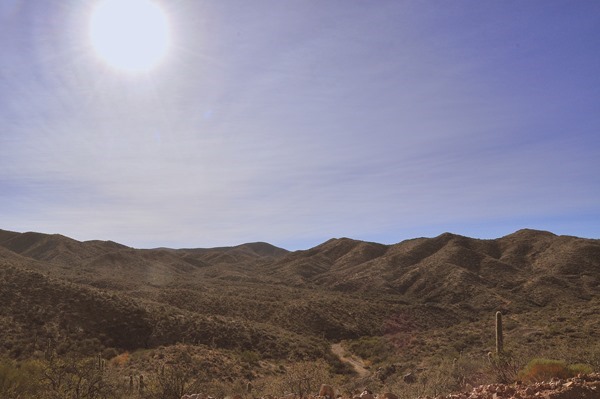 It was Hank Williams we had riding with us for a ways this morning as well as Benny Goodman, Glenn Miller and many of the old crooners from days long ago.  It’s these tunes which so often take me back to my childhood when I was a little feller with a stick horse a big cowboy hat and a six gun riding the trails of the old West.  It’s these same tunes which now as an older fella with a Jeep a big cowboy hat and a camera that still takes me riding along on the trails of the old West.  I am one very fortunate fellow indeed…………….

GROANER’S CORNER:(( A pastor explained to his congregation that the church was in need of some extra money, so he asked them to consider being more than generous. He offered that whoever gave the most would be able to pick three hymns.   After the offering plates were passed about the church, the pastor glanced down and noticed that someone had graciously offered a $1,000 bill. He was so excited that he immediately shared his joy with his congregation and said he'd like to personally thank the person who placed the money in the plate.   A very quiet, elderly, saintly lady in the back of the church shyly raised her hand. The pastor asked her to come to the front, so she slowly she made her way towards him.  The pastor told her how wonderful it was that she gave so much, and in thanks he asked her to pick out three hymns.   Her eyes brightened as she looked over the congregation. She pointed to the three most handsome men in the church and said, "I'll take him and him and him."

Man who run in front of car get tired.
Man who run behind car get exhausted.

Man who eat many prunes get good run for money.

Man who drive like hell bound to get there.

Man who stand on toilet is high on pot.

Man who lives in glass house should change clothes in basement.

Man who drops watch in toilet bound to have crappy time.