We made it to Congress

This is Thursday’s Post.  For some reason my blog would not publish Thursday night, kept receiving a Google ‘ApiException’ error message.  Kelly finally fixed it today.

A nice quiet night here at the Route 66 Casino and I never even heard the Class C which pulled in beside us on our large slide side only a few feet away.  Cool enough in the night for our furnace to come on.  We are in the Southwest now where cooler nights are common place for the winter.  Cool is good, cold not so much. 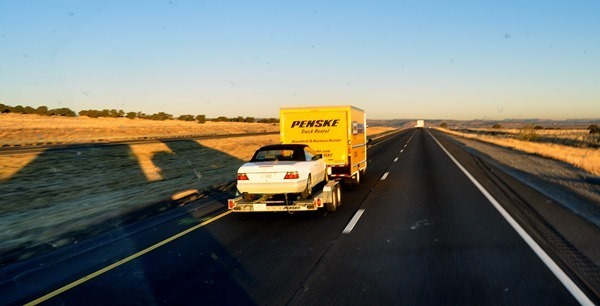 My day started early around 2 a.m. simply because I had fallen asleep early Wednesday night around 9.  These new sleeping pills I am on are only good for about 4 hours and I’m wishing now I had stayed with my old prescription which knocked me out for at least 6 or 7 hours a night.  Can’t change back until next April when we get back to Bayfield.  Kelly was up at 3:45 so it turned out to be a long day for both of us.

Under the cover of darkness we quietly slipped away from our snoozing RV neighbors and climbed aboard nearby I-40 heading west.  It was 6:15 A.M. as we climbed the long grade up from the valley floor where the Casino is located.  Always lite traffic in the pre-dawn hours and especially so out here in the west. 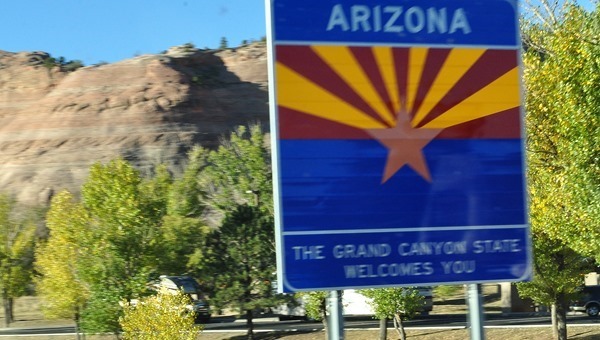 Watched another pink sunrise in my side mirror as the day dawned under clear skies.  Really enjoyed all my favorite western scenery rolling by as we steadily plodded westward.  So glad to see the ‘Welcome To Arizona sign go by.  I could feel myself tiring and began to doubt whether we would make Congress today.  At Holbrook we decided to pull in for some fuel and a couple McDonald coffees.  Had myself a leg stretch and was able to catch my second wind.  We were soon back on I-40 and by Flagstaff we had already decided to make tracks for Congress.  Regardless of how tired we were it just didn’t make a whole lot of sense to shut things down for the day when we were already less than 2 hours from home.  The barn door was open and the horses were soon into full gallop. 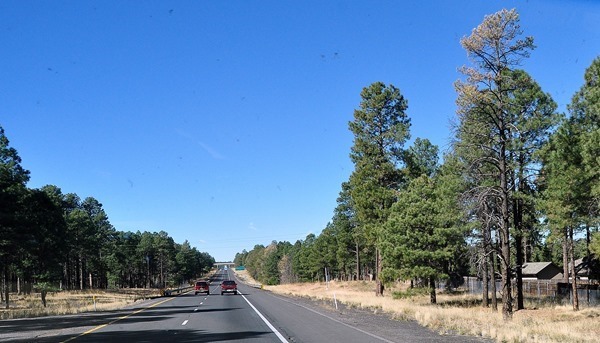 FLAGSTAFF IS SURROUNDED BY PINE FORESTS

SCENERY IN THE WEST JUST GOES ON FOREVER AND EVER

Turned off I-40 at Ash Fork and what a great feeling it was to know that was the end of our Interstate driving for a very long time.  Made our way down through the Chino Valley with every mile drawing us closer to home.  Well until we reached the outskirts of Prescott that is.  I knew the traffic light at the entrance to the Wickenburg Airport meant a right turn for us and as I swung round the corner I suddenly saw the road in front of me closed with a big iron gate across.  I braked and swung left coming to a stop in half a U-turn.  What the heck!!!!!!  Well I have no idea why that road is no longer in use so I eased back out on the 4 lane highway leading into Prescott then in my confusion missed the the right hand turn onto a ramp which would have put us back on the correct road we normally use.  Well to make a long story short we got dragged right down into Prescott and became totally lost.  Finally had to pull over and wait for Kelly to activate her Blackberry GPS and thank heavens she did.  Typed in ‘Iron Springs Road’ and the Blackberry Gal led us on a twisting turning journey through the heart of Prescott along narrow roads packed with local traffic two and sometimes 3 lanes across.  We just followed her directions and did our best not to run over anyone along the way.  Must admit we did see some really nice sections of Prescott between traffic lights, stop signs, and bumper to bumper traffic.  At last Blackberry Betty landed us on Iron Springs Road and we were able to recognize an intersection and finally re-orient ourselves as to where we actually were.  Minutes later we were making our way through familiar territory and on our way again.  At one point I had to open my driver’s door for awhile just to let all the accumulated volumes of ‘Blue Air’ out of the coach.  Not nice to throw Al a curve like that when he’s overtired you know!!  Even little Pheebs had her paws over her ears.

THIS WELCOME SIGN MARKS THE END OF OUR INTERSTATE DRIVING

ROLLING SOUTH THROUGH THE CHINO VALLEY WITH PRESCOTT DEAD AHEAD 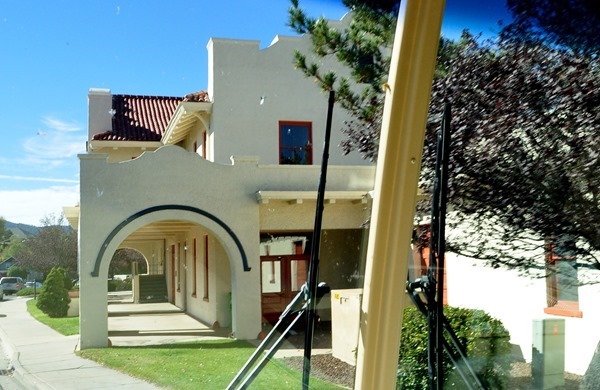 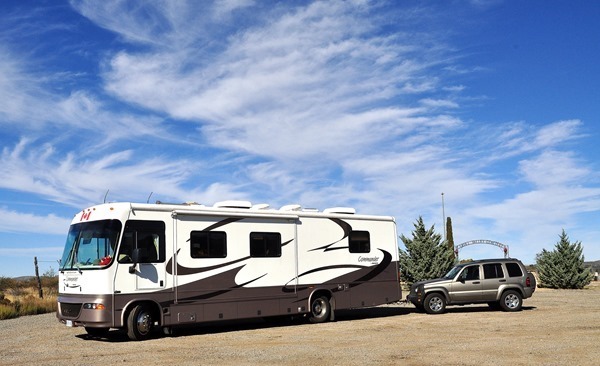 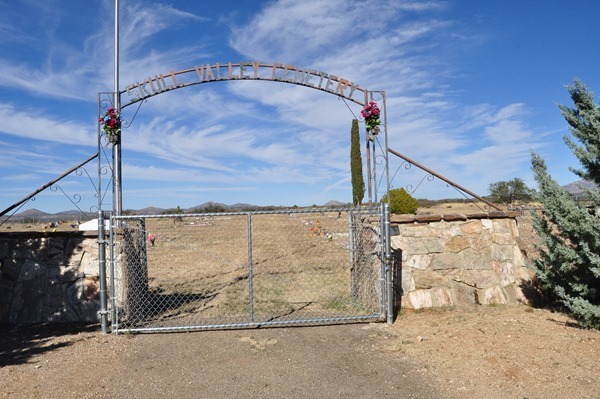 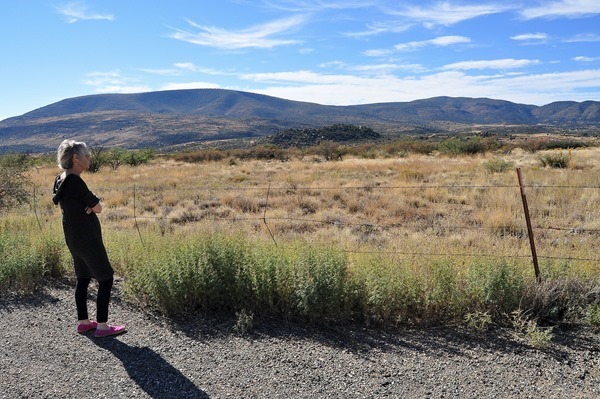 How great to see all our old familiar places as we made our way through Skull Valley, Peeples Valley and Yarnell.  One last feat to accomplish as we started our dizzying descent down the Yarnell Hill to the desert floor below.  For some reason it seemed longer and steeper than I had remembered it.  Our dash clock said it was 2:30 in the afternoon and minutes later we reached Congress on the desert floor far below.  How great to be back as we turned onto Ghost Town Road.  A short half mile later we rolled up to our south gate.  Kelly hopped out and opened it, I pulled in and rolled to a stop in front of our house.  Even from the driver’s seat everything just looked soooooo nice.  Our looooooooog tiring journey was finally over:)))))))))))))))))))) 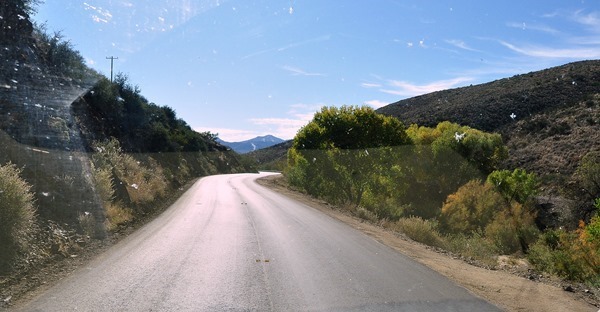 We had agreed beforehand not to get crazy about getting everything unloaded and set up.  We were just way too tired to do our usual frantic unloading.  Instead we opened our front door and walked into the house marveling at how everything looked exactly as we had left it.  Nothing out of place anywhere.  We had a look around the property and again everything was perfectly in place.  Opened the shed and no Packrats this year.  We finally ended up just sitting on our front porch enjoying the peace and quiet we have always enjoyed so much here.  All my familiar little southwest birdie Pals were happily tweeting so I quickly had a bird feeder filled for them and hanging in it’s place from a Mesquite tree.  Maybe get me a few new bird photos soon:)) 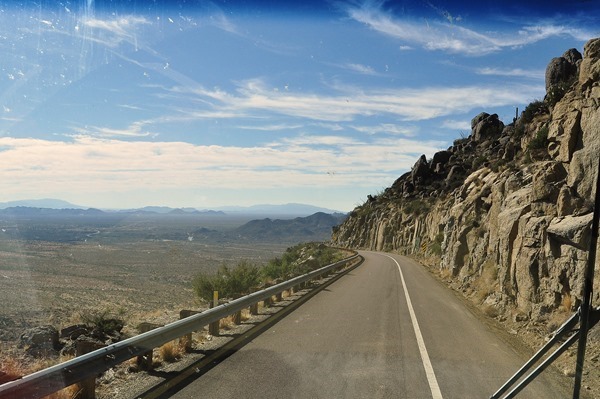 HERE WE COME TUMBLING DOWN THE YARNELL HILL…..THERE IS A LITTLE WHITE DOT ON THE VALLEY FLOOR LEFT OF CENTER AND THAT DOT IS VERY CLOSE TO WHERE OUR HOUSE IS

They boys from the Congress Water department showed up and turned our water on and Kelly fired up the main switch for our electricity.  Everything worked and though tempting as it was to get busy moving things into the house we just didn’t have the energy to do it.  We decided to spend the night in the Motorhome then get at things in the morning.  I just can’t tell you enough how great it is to finally be back here in the great American Southwest.  And for sure it is going to take us a number of days to de-stress and let the dust settle from this long trip.  487 miles traveled today and 4,201 miles traveled since leaving Bayfield 24 days ago.  I think Pheebs and I are way overdue for a Jeep ride and a coffee and carrot muffin to go………:))))))) 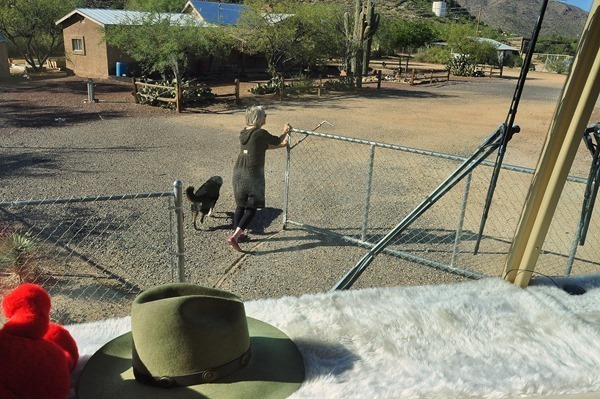 BEEN OVER 7 MONTHS SINCE WE LAST OPENED OUR SOUTH GATE

GROANER’S CORNER:(( There was a man walking alone along a beach. He comes across a bottle with a cork in it. The man picks up the bottle and pulls out the cork. A loud roar follows and a genie appears. The genie says to the man, "I'm a little tired today and I can only give you two wishes."
The man says "That's OK, two is enough." "First, I would like one-billion dollars in a Swiss bank account."  Poof - The genie hands the man a paper and says "Here's the number to your account."  Next the man says, "Second, I would like to be irresistible to women."  ‘Poof’ - the Genie turned him into a box of chocolates.

Driving down a remote road, a motorist sees a sign that says: "Watch For Fallen Rocks."  A couple of miles of careful driving later, he spots some pebbles and stops to pick a few up. Arriving in the next town, the motorist carries the stones into the highway maintenance office.  Placing them on the counter, he says to an official: "Here are your fallen rocks. Now where's my watch?".