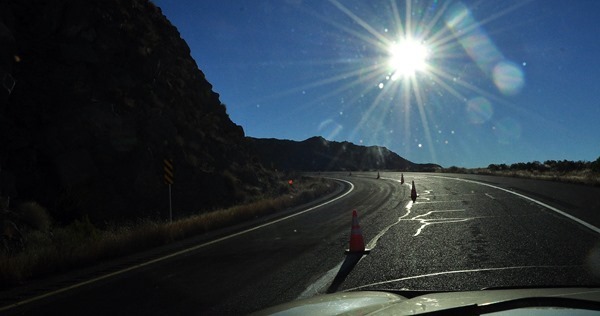 HEADING UP THE YARNELL HILL THIS MORNING BUT WHY ARE THESE ORANGE CONES SEPARATING THE TWO ONE-WAY LANES?? (THAT LEFT LANE WAS BEING USED AS A DOWNHILL LANE TODAY)

During winter months clear desert nights mean cold desert nights but a clear starry sky also means a clear sunny morning and it’s those sunny mornings which I so much look forward to.  However, sunny days don’t necessarily guarantee warm days and today was a good example of that.  We had an icy cold wind blowing from the North so that meant another Jeep ride instead of a walk. 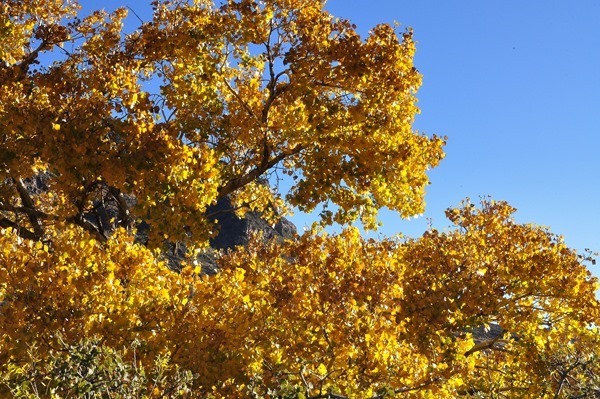 Being Tuesday I figured Yarnell’s Bakery would be open so Pheebs and headed off to get us some donuts to bring home.  At the foot of the Yarnell Hill I saw a lot of orange cones blocking off the southbound lanes coming down the mountain and a police cruiser parked.  It was only then I remembered that today was the day a ceremony would be held to officially dedicate the new Granite Mountain Hotshots Memorial State Park as a tribute to the 19 firefighters killed during a 2013 wildfire in Yarnell Arizona.  The 3-mile trail and memorial will serve as a lasting tribute to the fallen firefighters' heroism. Granite Mountain Hotshots Memorial State Park  This is Arizona's first Memorial State Park. 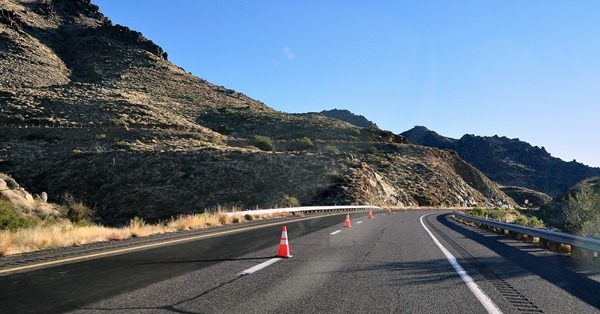 NOT SURE WHAT THESE WORK TRUCKS WERE ALL ABOUT….MAYBE SIGN TRUCKS

If one doesn’t take highway 89 down the Yarnell Hill there is only one other way to get down and of course it is the old Stage Coach Road running between Yarnell and Stanton.  Well that’s always perfectly fine with me so for the about the 4th time already this year Pheebs and were again slowly bouncing ourselves along the scenic southbound road down through the southern edge of the Weaver Mountains. 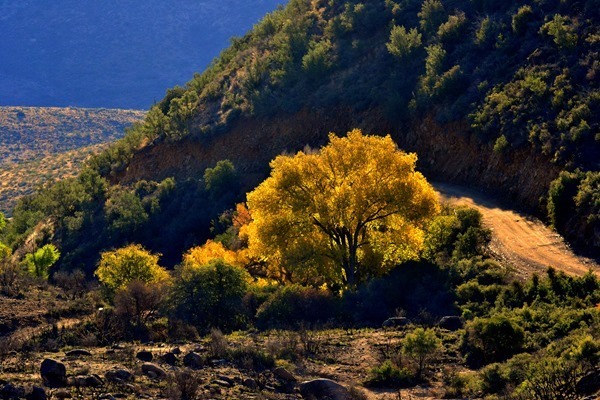 Stopped at our usual old cow pens enclosure along the way where we usually see a herd of cows browsing around the water hole.  No cows this morning, well no live ones that is.  While standing beside the Jeep I happened to look across the road and saw what appeared to be at first glance a large brown boulder.  Only problem was there were no other boulders around the same color.  Hmmmmm, well that warrants a closer look see.  Walked across the rough road and up a slight knoll through some prickly pear cactus and mesquite.  Didn’t take me long to see in fact that the odd looking big brown boulder was in fact a full grown dead cow.  No signs of trauma to the body and I figure it had probably been dead less than 24 hours.  Unlike Ontario with adjoining farms every few miles cattle range free out here for miles and miles and finding the rancher who this cow belonged to was pretty well impossible.  Nothing we could do about it so we just hopped back in the Jeep and moseyed ourselves along on down the mountainside. 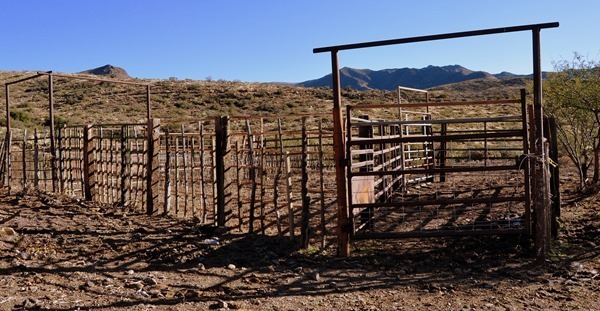 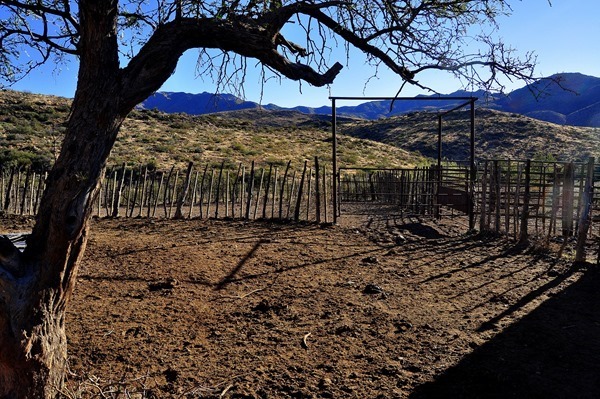 Didn’t see any activity in or around Stanton anywhere so we just kind of tippy toed our way on by heading back to Congress.  Slipped off on a couple dusty side roads along the way and had us a look around.

THIS IS A AN 18mm WIDE ANGLE LENS VIEW SHOWING THE ESCAPEE’S NORTH RANCH TO THE EXTREME LEFT AND THE TOWN OF CONGRESS ON THE EXTREME RIGHT….CLICK TO ENLARGE AND THE TINY WHITE DOTS YOU SEE AT THE EXTREMES WILL BE NORTH RANCH AND CONGRESS 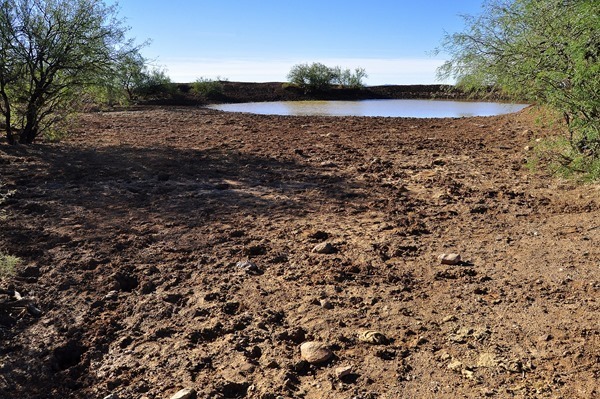 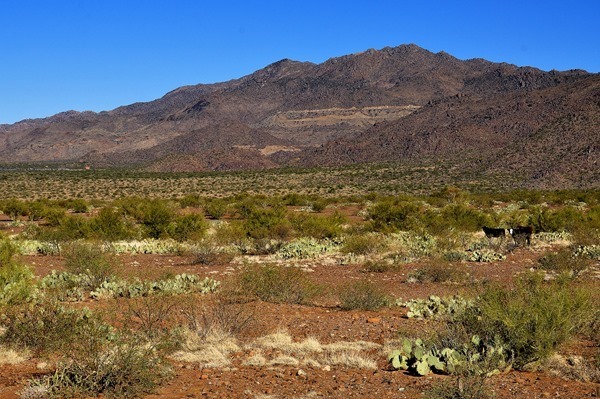 Approaching highway 89 I happened to look off to my right at the Weaver Mountains and noticed high up what appeared to be a convoy of vehicles moving slowly down the southbound lane.  Knowing this lane was closed to the public today I right away figured it must be the busloads of dignitaries and specially invited people like members of the fallen firefighters families arriving for todays dedication ceremony.  Today's Dedication Ceremony  It was 10 a.m. and my figuring was right.  I stopped and took a series of of long range photos showing where the 7 buses stopped at the new trail head on highway 89.

THESE PHOTOS WERE TAKEN WITH A 300mm LENS THEN GREATLY CROPPED TO BRING THE IMAGES CLOSER….WHAT I ORIGINALLY SAW WITH MY NAKED EYE WERE ONLY WHITE SPECS MOVING ON THE SIDE OF THE MOUNTAIN 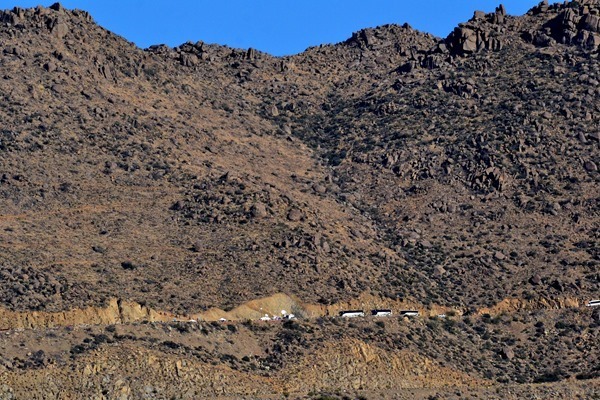 THESE PHOTOS TAKEN FROM THE STANTON ROAD 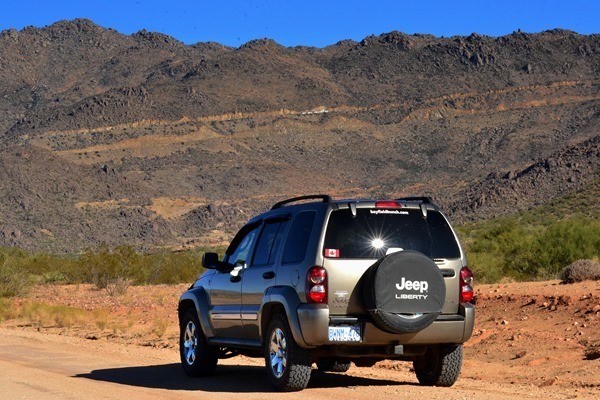 THE TRAILHEAD IS THAT WHITE SPOT ABOVE THE JEEP 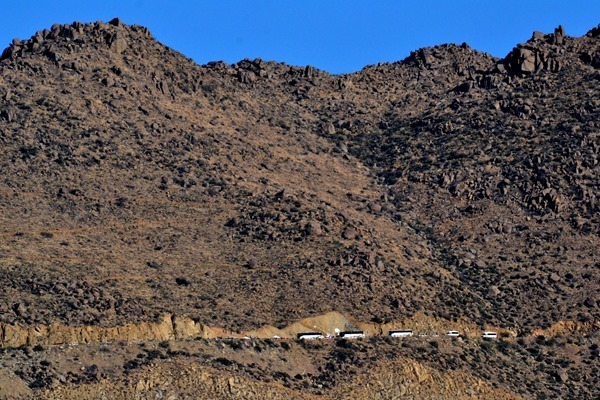 THE TRAIL BEGINS WHERE THE BUSES ARE THEN CLIMBS THROUGH A SERIES OF SWITCHBACKS UP THE MOUNTAIN TO THE TOP LEFT OF THE PHOTO THEN SWINGS THROUGH A LOW PASS SWINGING AROUND THAT KNOBBY KNOLL AND i THINK HEADS RIGHT….IF YOU CLICK ON THE PHOTO AND LOOK VERY CAREFULLY YOU MAY BE ABLE TO SEE PARTS OF THE TRAIL….THE TRAIL IS DESCRIBED AS STRENOUS AND YOU CAN EASILY SEE WHY 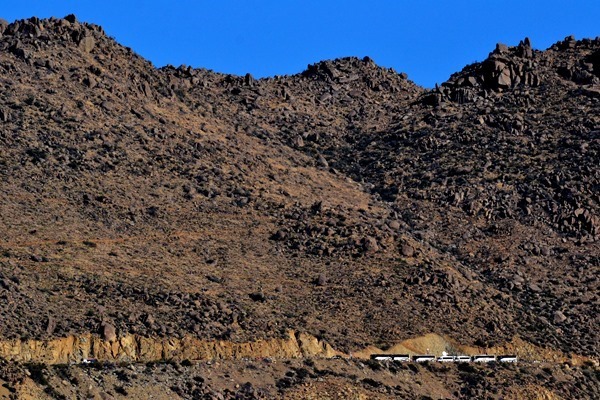 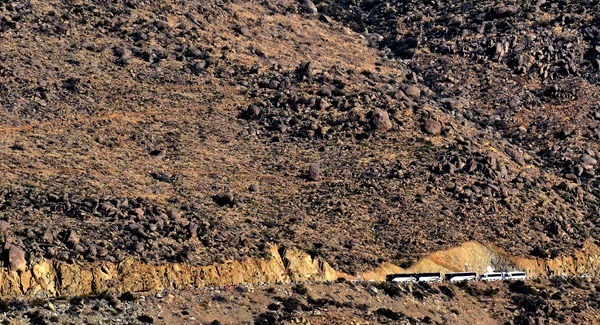 It was one month ago today we arrived in Sarasota Florida on our way to Arizona.  Already our visit with Aunt Jean seems so very long ago.  Talked to Jean a couple night’s ago and she was going to try and get out with friends for a round of golf today.  Even if it’s only a few holes she feels it will be beneficial both physically and mentally.  Along with her daily morning walks it has been her love of golf over these many years that has kept her so actively in good shape.

‘GRANITE MOUNTAIN HOTSHOTS’ TRAIL HEAD TOP RIGHT AND BUILDINGS IN THE FOREGROUND ARE PART OF THE LARGE ABANDONED DAIRY RANCH I HAD A PHOTO OF A WEEK OR SO AGO FROM UP ON THE YARNELL HILL….IT WAS FROM THIS SPOT NEAR THE CATTLE RANCH I USED MY BINOCULARS THIS MORNING TO FIND THE TRAIL AND SPOT PEOPLE ON IT….THIS PHOTO WAS TAKEN WITH A WIDE ANGLE 18mm LENS

GROANER’S CORNER:(( The Teacher had asked the class to write an essay about an unusual event that happened during the past week.
Little Johnny got up to read his. It began, "My daddy fell in our well last week." "Good Lord!" the teacher exclaimed. "Is he OK?" "He must be," said Little Johnny. "He stopped calling for help yesterday."

A young boy enters a barber shop and the barber whispers to his customer, "This is the dumbest kid in the world. Watch while I prove it to you." The barber puts a dollar bill in one hand and two quarters in the other, then calls the boy over and asks, "Which do you want, son?"
The boy takes the quarters and leaves. "What did I tell you?" said the barber. "That kid never learns!"  Later, when the customer leaves, he sees the same young boy coming out of the ice cream store. "Hey, son! May I ask you a question? Why did you take the quarters instead of the dollar bill?  The boy licked his cone and replied, "Because the day I take the dollar, the game is over!"