ANOTHER LITTLE MYSTERY IN THE DESERT 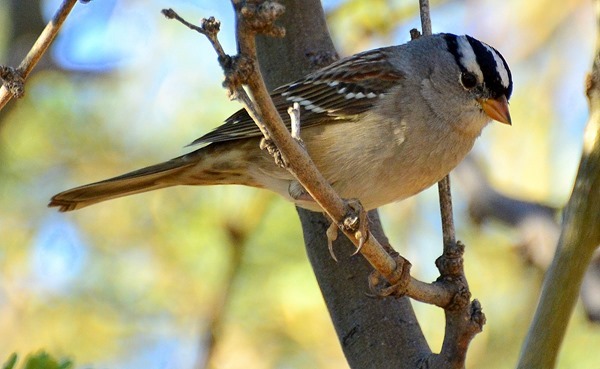 MANAGED TO GRAB MYSELF A FEW BIRD PHOTOS THIS AFTERNOON

The night’s cloud patterns were dark with high long openings off to the East letting through wandering shafts of pale Moonlight.  A few faint stars in their stillness twinkled through thinner layers of cloud cover.  Against this backdrop of ethereal light moved several small bright perfectly timed oscillating lights.  They traveled steadily in long curving arcs in the space between earth and the overcast.  Sometimes they would converge and sometimes they would appear to flee from one another, sometimes silent and sometimes with great roaring sounds.  I had seen and heard this patterned behavior before in the desert night sky and knew right away what it was.  The boys from Luke Air Force base south of us were piloting their F16 fighter jets among the stars in mock combat high over the darkened floor of the Sonoran desert. 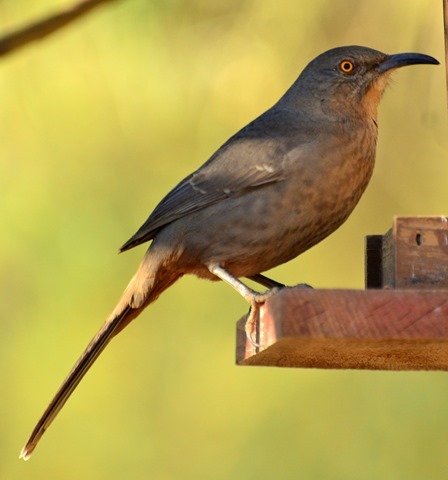 I wrote the above opening paragraph Thursday morning regarding Wednesday nights outing with Pheebs.  And that was as far as I got with Thursday’s post.  With no photos and little interest in putting a post together I just never bothered trying to make something interesting out of a totally uninteresting day.  And that was that. 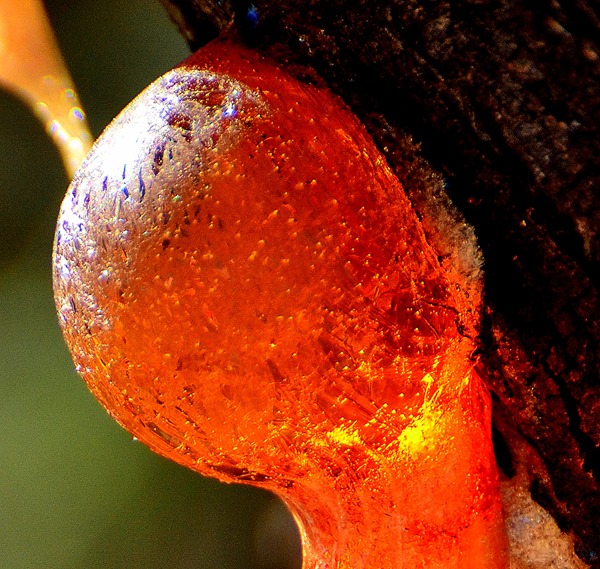 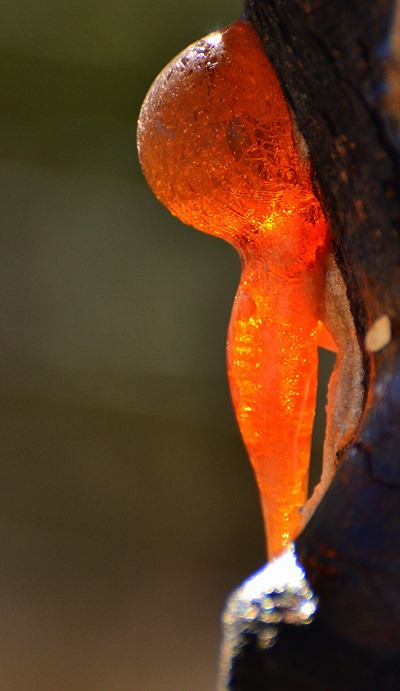 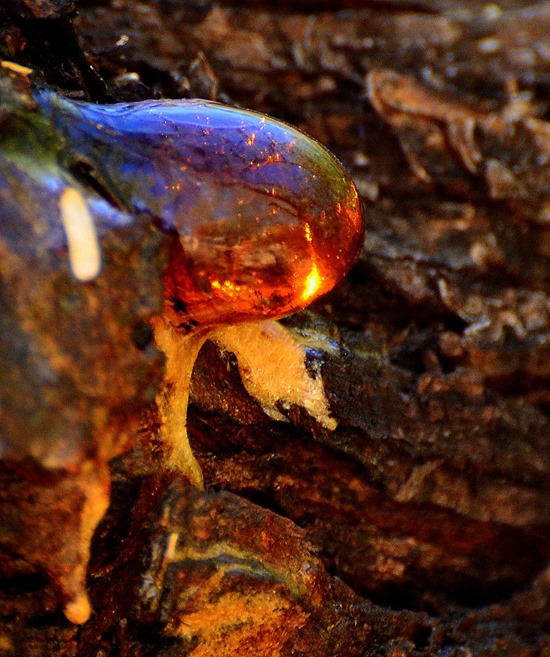 COULD THIS BE THE SPACE POD IT CAME IN?? 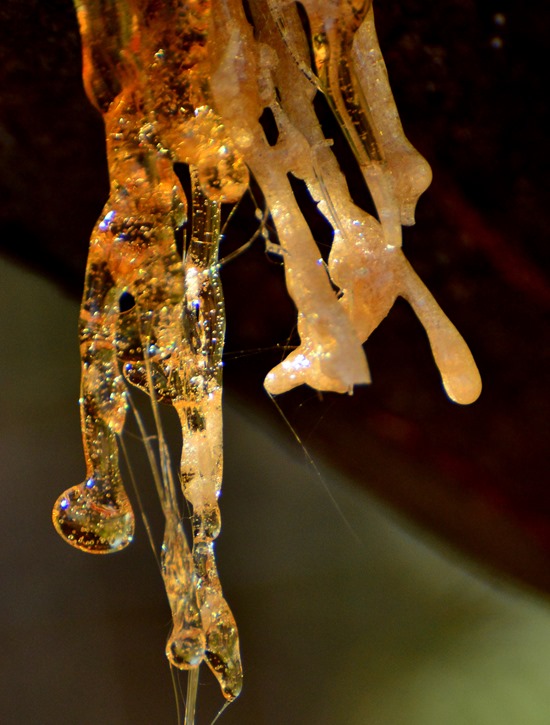 AND OH MY ARE THESE IT’S TENTACLES 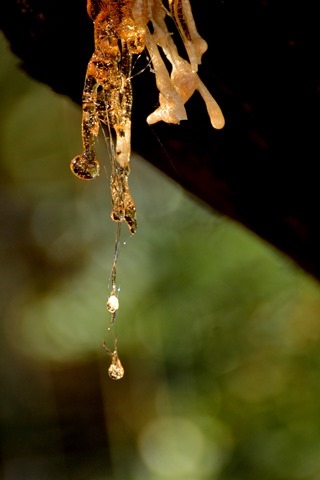 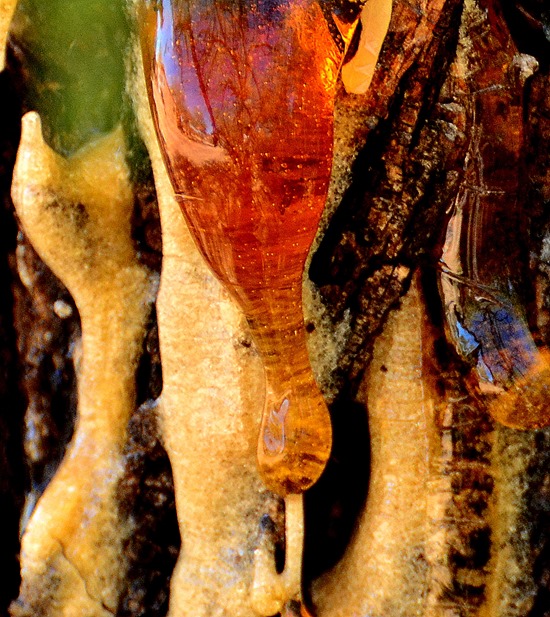 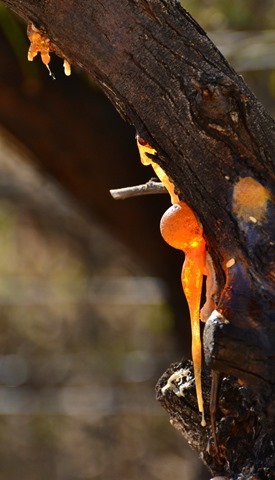 WELL NO SUCH LUCK, IT’S ONLY SOME SAP DRIPPING OUT OF A MESQUITE TREE

By chance I noticed it was November 18th today and that meant it was one month ago this morning we rolled out of Bayfield Ontario heading for Spencerport New York, Sarasota Florida, and Congress Arizona.  Little did we know how sick I was going to get and just how much that long journey was eventually going to knock the absolute stuffings out of us……And by the way if anyone missed the Update on Retired Rod just click the yellow link.  Not the outcome we were all hoping for. 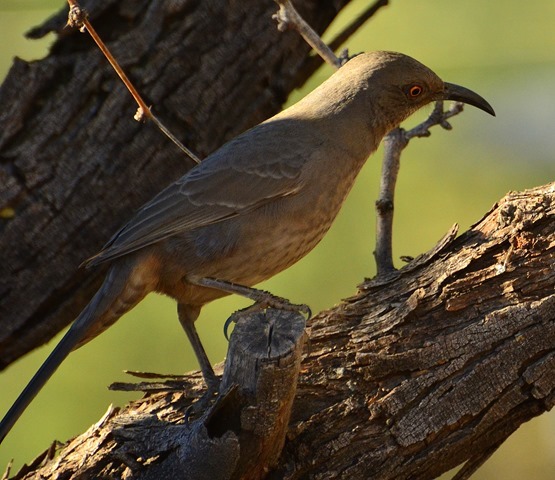 Took Pheebs for a drive and a walk in the desert behind our house earlier today.  A much nicer morning than the previous days cloudy cold and very windy conditions.   Over the past 10 winters wondering around the Southwest we have come across lots of interesting and sometimes mysterious things in the desert.  This morning I parked the Jeep and Pheebs and I headed off for a walk.  A short distance away I noticed vehicle tracks going off the road into a soft sandy wash. (dry river bed)  Thought it odd and noticed the vehicle only went maybe forty feet.  Out of curiosity I walked up the wash and noticed where two tires had slightly dug in a wee bit and a blackening of the sand between the tire digs.  Another 15 feet I noticed many foot prints circling a fair sized pile of sand mounded up in a circle.  On that mound lay 2 scattered beer cans.  Took me a few minutes to come up with a theory about what may have happened here.  First, I figured the vehicle had backed into the wash because of the way the sand was pushed up behind the 2 rear tire tracks.  Next I deduced the vehicle was left running for a bit and the black mark on the sand was from an exhaust.  The mounded up circle of sand could only mean one thing.  Somebody buried something here.  I know of no Irish Leprechauns in the area so it was doubtful it was a pot of gold.  I have a feeling someone’s large dog may have died and it’s owner brought it out into the desert for burial.  Just a theory of course but I base it on the fact that just a few hundred yards from this spot is another spot I came across 2 years ago where I feel for sure someone’s pet was buried.  I walked over and took a photo of that spot as well. 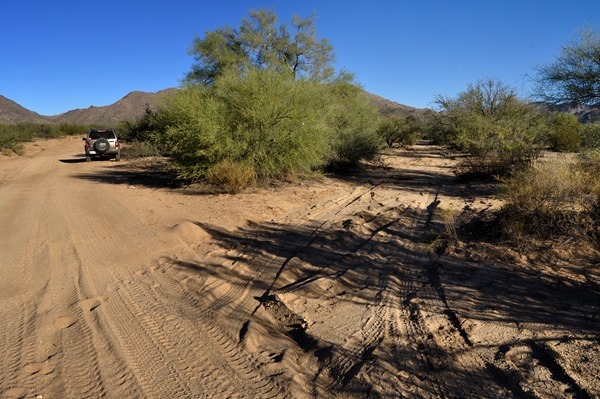 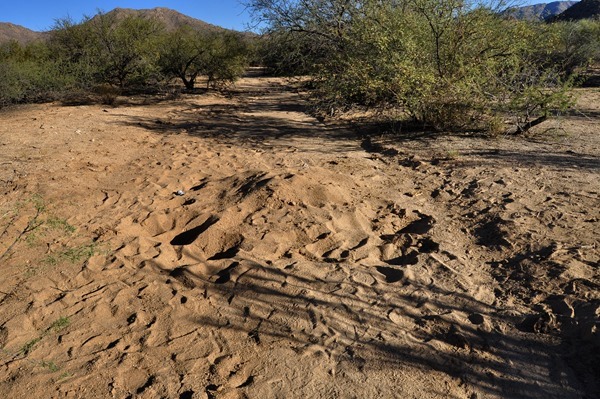 MANY FOOTPRINTS SURROUND THAT MOUND OF SAND AHEAD 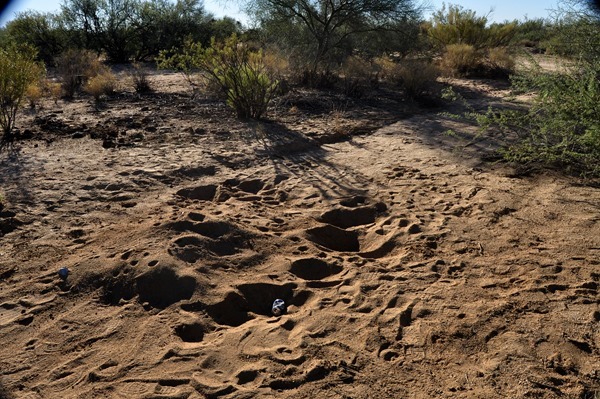 A VEHICLE BACKED IN FROM TOP RIGHT AND I FIGURE THE OCCUPANT/S OF THAT VEHICLE BURIED ‘SOMETHING’ IN THE FOREGROUND….NOTE THE TWO CRUSHED BEER CANS AND ANOTHER BEER CAN WAS STUCK IN A MESQUITE TREE OUT BY THE ROAD TO MARK WHERE THIS SPOT IS 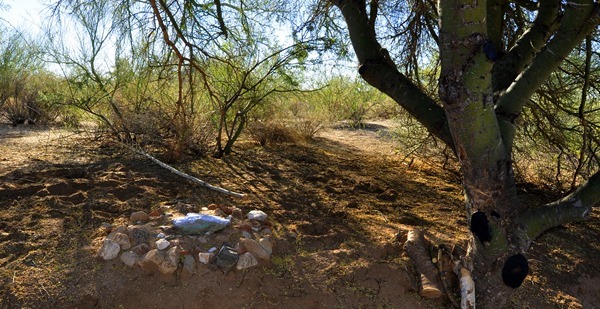 A SHORT DISTANCE AWAY IT WAS THIS SPOT WHERE I AM CONVINCED SOMEONE BURIED A PET TWO WINTERS AGO….I REMEMBER A NAME ON THAT LARGE CENTER STONE 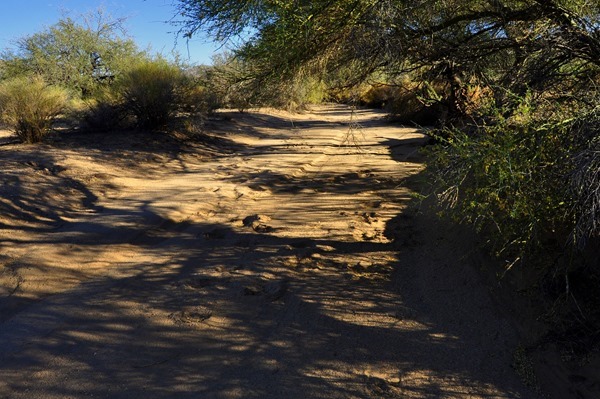 THIS IS A TYPICAL DRY DESERT WASH….IN THE SUMMER MONSOON SEASON THESE WASHES RUN FULL TILT CHANNELING ALL THE WATER RUN-OFF FROM SURROUNDING MOUNTAINS….ONE DOES NOT WANT TO GET CAUGHT IN ONE OF THESE FAST FLOWING WATER RUN-OFFS

Looks like we have rain on the way for Monday which will be a good thing.  Several neighbors have told us the annual summer Monsoons did not bring the heavy soaking rains this past summer and I guess that is why our grasses didn’t do as well as I thought they would. 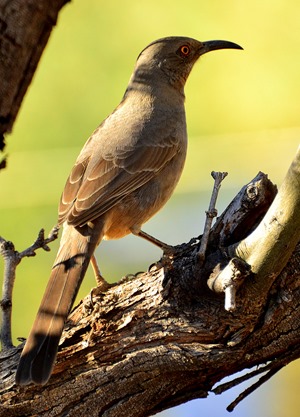 We have been in Congress just over a week now and this morning I was able to get myself together enough to finally accomplish a few more things.  Dumped the Motorhome’s gray and black tanks, checked the four coach batteries water levels, ran up the generator and trimmed a bunch of low hanging sucker branches around the properties Palo Verde and Mesquite trees.  Erected our long polled wind speed indicator on our front gate plus took care of half a dozen other little things while I was at it as well. 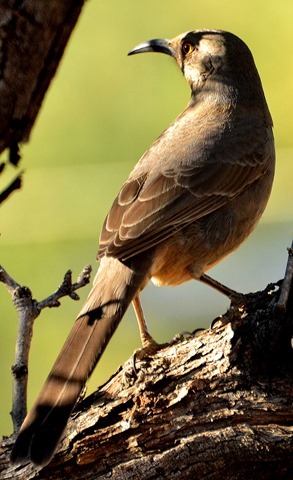 Kelly slipped into Wickenburg for a few groceries and some browsing.  She stopped into the Congress Depot to see the owners Judy and Jerry there on her way back and of course lots of changes since we left last March.  They sold their business, buildings, and property and are in the process of moving to Limon Colorado.  Judy said they are still making yummy pizzas there though so might have to get one shortly while they can still be got.  When Judy mentioned Limon Colorado Kelly thought it sounded familiar and yes it was familiar alright.  Here’s our link to Limon Colorado back in early November 2007…….Al Ends Up In The Hospital 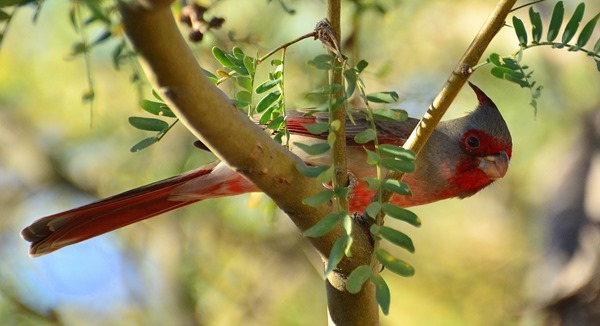 A tough old cowboy once counseled his grandson that if he wanted to live a long life, the secret was to sprinkle a little gunpowder on his oatmeal every morning.  The grandson did this religiously and he lived to the age of 93.  When he died, he left 14 children, 28 grandchildren, 35 great grandchildren and a fifteen foot hole in the wall of the crematorium.