WHAT A NICE MORNING FOR A COUNTRY ROAD DRIVE

I know I am sounding very much like a broken record again but what a totally beautiful weather day we had ourselves.  Autumn's magic is in the air and nowhere more apparent than our rural countryside.  The Old Master's paint brush has been dabbling Huron Counties tree tops with dapples of color along forested roads, hedge rows and trees standing tall alongside fields of golden corn. 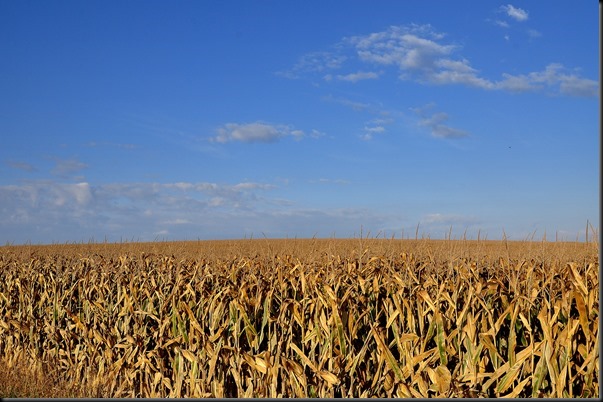 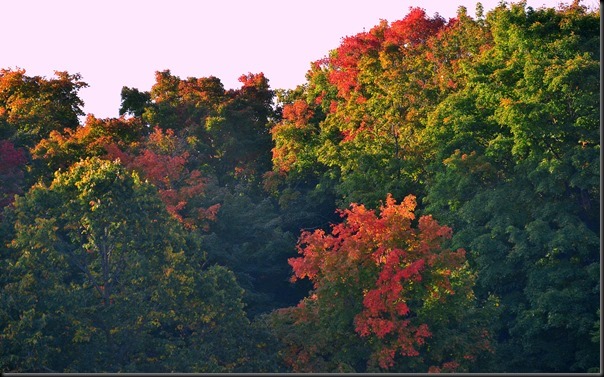 Had the Motorhome into the Bayfield Garage slightly before 8 a.m. and checked that appointment off my list.  Back home I consulted with Pheebs and we figured we had better take Libby’s new BFG tires out for a good old gravel road test drive.  Knowing we had to take the Jeep to the Bayfield Garage as soon as the Motorhome was done we didn't venture too far as we slipped over to Clinton for a coffee and muffin to go then southeast out of Clinton into the countryside slowly working our way back into the south end of Bayfield an hour later.  What a marvelous morning we had just poking along slowly soaking up all of early October's finest scenery.

I JUST NEVER GET ENOUGH OF OUR RURAL FARMLANDS

I had a definite destination in mind this morning as we headed for Stormrunner RV Sales.  Last time I had seen our friends Dianne and Harry was two winter's ago just off Ogilby Road in the desert near the Imperial Sand Dunes west of Yuma California.  Dianne was in the store this morning but Harry and their dog Sport had gone to Orillia to pick up a boat.  They are in their last weeks of closing up their business and finally retiring.  Dianne and I see eye to eye on many things so we had ourselves a good old chat for awhile.  Wished I could get myself into the habit of dropping around to see friends more often but it's something I have a hard time with.  Dianne and I talked a little bit about that.  The problem isn't with the friends we have, the problem is with me.   As much as I enjoy my quiet solitary times I sometimes wish I could simply pop right out of myself and feel comfortable about dropping in to visit friends and being more at ease around people.  Seems to me I may have written about these thoughts awhile back………………. 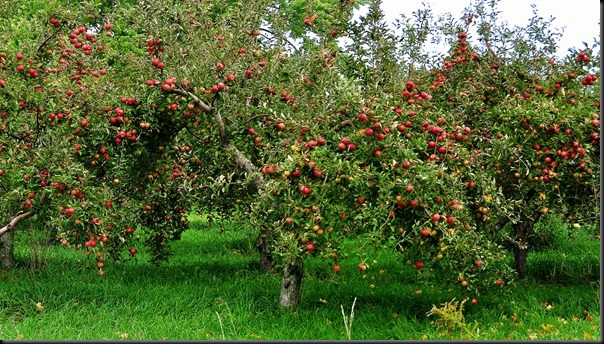 Not long after Pheebs and I got home the Bayfield Garage phoned saying the Motorhome was done so  back into the Jeep and the three of us headed for the garage.  Dropped off the Jeep, picked up the Motorhome and headed off to Clinton to flush our gray and black tanks at the RV dump station just east of the Fire Hall.  What a gorgeous day for a Motorhome drive in the country. (on paved roads of course) 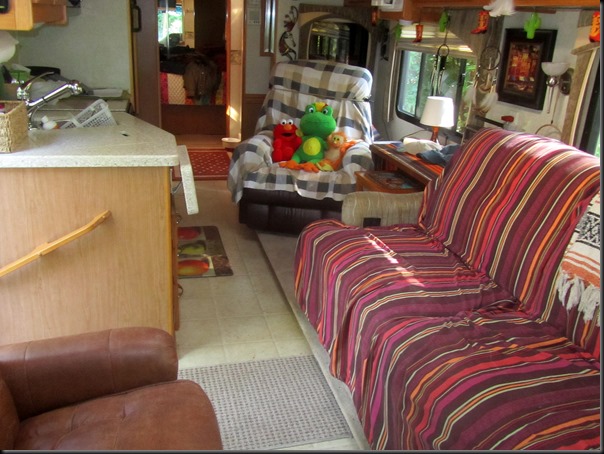 THE ROAD CREW CAME ALONG TO HELP ME EMPTY THE TANKS 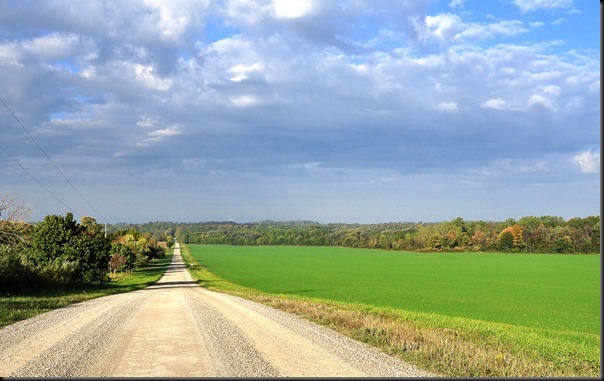 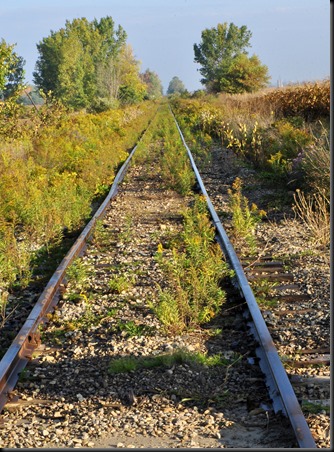 ARE THESE CANADA GEESE TAKING OFF OR LANDING??  ‘TAKING OFF’

Contessa from 5C's Que Pasa way over there in Kelowna BC asked this question in my Tuesday night post about our new Jeep tires. "Why would you not leave the new tires on year round"?  The tires that were on our Jeep are still good but not good enough for my liking to be towed behind the Motorhome or used for 'off-roading' in the Southwest.  After Albuquerque's blow-out last March I just simply wanted better tires on the Jeep.  Also I want those tires to last for a few years and be used again in the Southwest.  And I don't want to wear them out on our gravely country roads around here during the summer.  It's the same principle as changing back and forth from summer to winter tires and vice versa.  If by chance we don't make it down south again next winter then I will use the BFG tires as winter tires here in the Snow.  Eeeee Gads did I just use the four letter S word.

Also in Tuesday's post I mistakenly said that we were thinking of switching to Millenicom/AT&T.  That should have read Millenicom/T-Mobile.  Thanks to Kelly and Caron for pointing that out.  It seems in this aging process of mine I am needing more things pointed out all the time.  Why just the other day someone had to point out I had my pants on backwards.  Guess that would explain my difficulty that day backing into everywhere I was going to forward go.  Guess that would also explain my confusement when I…….awwwwww never mind. 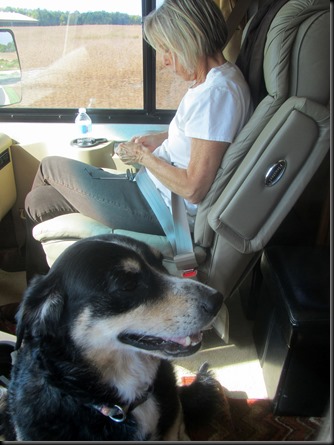 Expecting the Jeep to come home with not much more than a needed oil change we were disheartened when the Bayfield Garage phoned telling us the Jeep needs a new battery which I am not surprised about and also needs a new control arm.  Now that one was a definite unexpected surprise.  Jeep Liberty had a Re-Call on those control arms years ago when it was found Jeep Liberties in Northern climates traveling salty roads were prone to having the control arms rust out and fracture.  If a control arm breaks the vehicles rear end will begin to sway from side to side and the driver can easily lose control.  If the vehicle is being towed like in our case and the control arm suddenly breaks it could have disastrous consequences for not just the Jeep but the Motorhome as well.  I knew our Jeep Liberty was rusty underneath and decided a few days ago to have it undercoated at the Bayfield Garage and I suspect that is how they came across the control arm problem.  The control arm itself is a $300+ part plus an hours labor charge to install it. 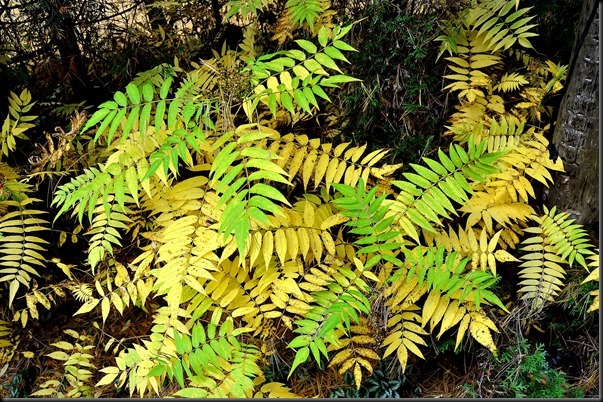 Oh and here’s some more ‘not so good news.’  This morning while checking the drivers side outside dual tire on the Motorhome it was found to be substantially down in air due to a possible faulty valve.  Can’t take a chance on that so we have another appointment at 8 in the morning with Clinton’s HURON TIRECRAFT  to see if that tire problem on the Motorhome can be fixed.  Needless to say Kelly and I are walking around feeling a little weak kneed tonight with these unexpected vehicle expenses but at least on the upside we are very fortunate to have had these potentially dangerous problems discovered before we ever even got ourselves on the road and ended up in one real big darn mess………. 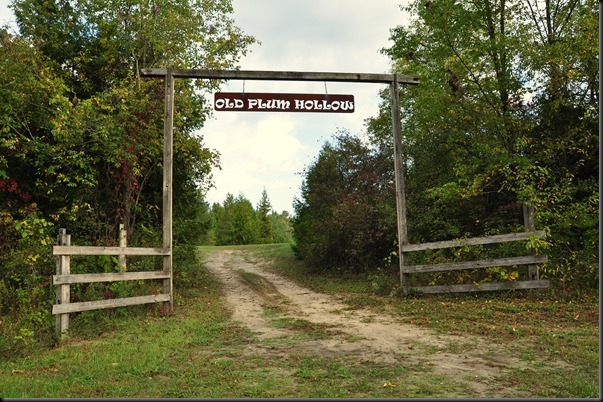 GROANER'S CORNER:(( A pastor was opening his mail one morning and one envelope had only a single sheet of paper with a single word printed on it: “FOOL!”  The following Sunday the priest announced, “I have known many people who have written letters and forgotten to sign their name. But this week I received a letter from someone who signed his name and had forgotten to write a letter.”

Knock Knock
Who's there?
Walter!
Walter who?
Walter-wall carpeting!

Teacher: "Which book has helped you the most in your life?"
Student: "My father's check book!"

At a local coffee bar, a young woman was expounding on her idea of the perfect mate to some of her friends.  "The man I marry must be a shining light amongst company. He must be musical. Tell jokes. Sing. And stay home at night!"  An old granny overheard and spoke up, "Honey, if that's all you want, get a TV!"