SO GREAT HANGIING OUT WITH AUNTY JEAN THESE PAST COUPLE DAYS 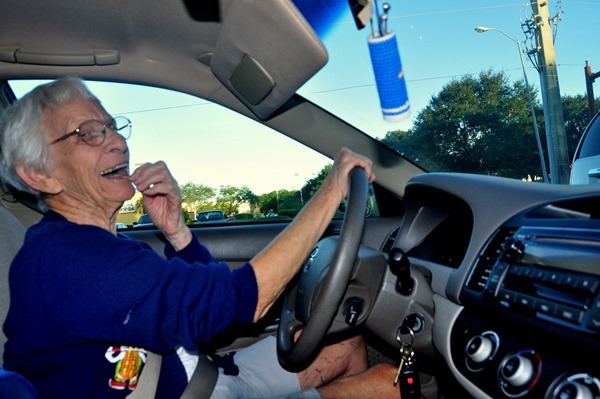 ‘SPEEDIY GONZALEZ’ (AKA AUNT JEAN) ROCKETS US THROUGH SARASOTA’S HEAVY TRAFFIC……I THINK WE WERE DOING ABOUT 85 MPH HERE DOWN A DEAD END STREET:))

The last time we had seen Aunt Jean was in April 2013 when she had flown from Florida to Canada for her brother, my Uncle Harry’s funeral.  Jean and I talk weekly by phone now and how great it was to finally see her again in person early Sunday afternoon when she drove out to our location.  Big happy hugs all round and I can tell you Aunt Jean is the number 1 reason we are here.  Lots for us to talk about and discuss over the coming days as we plan to do a lot of hanging out at Jeans:))

Luckily it’s not too far a drive from our Fruitville Road area location to Jean’s condo so we followed her back in the Jeep about 20 minutes away.  How nice to be in a sticks and bricks house again.  Jean  has a real nice cozy little place.  Pheebe was right at home. 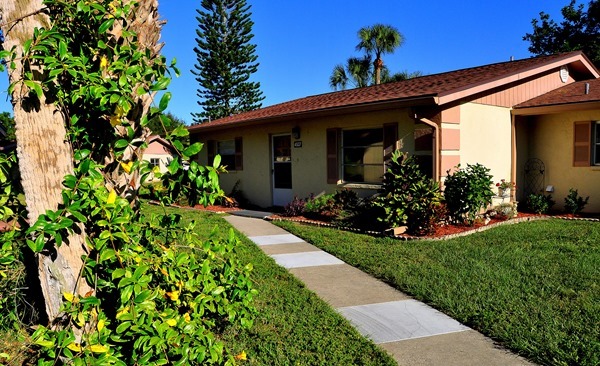 Jean took us out for supper at Miller's Ale House and I was so glad she drove.  She is quite the little speed ball as she whips around through Sarasota’s traffic mosh in her sporty little 07 Toyota Camry.  I think maybe I get some of my driving skills and long distance tendencies from her.  It’s kinda in our family.  Miller’s Ale House is a kind of a sports bar and I’ve never seen so many HUGE flat screen TV’s ringed around a big open room like that before.  Of course I’m like a little kid in a candy store looking around at all the great dancing colors on the big screens.  Miller’s Ale House is a very popular eating place in Sarasota and Jean said during the winter season people are lined up outside to get in.  Kelly had some of those ocean grown Shrimpy things while Jean and I had ourselves a mess of BBQ’d ribs which I just loved.  Of course I had mashed potatoes and gravy with mine which was also excellent.  When all else fails in life just give me a big smash of mashed potatoes and gravy. 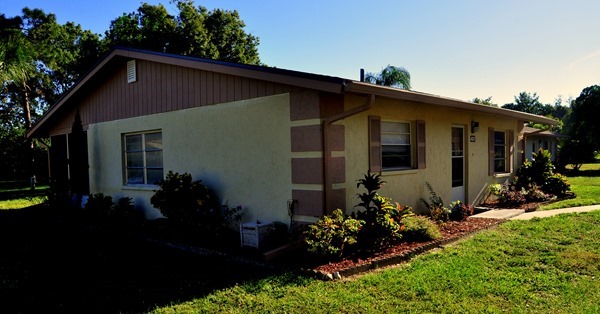 From the Ale House it was back to Jean’s where I continued working on a couple loads of laundry.  With this Florida humidity my oily skin sweats a lot so I generate a lot of laundry. It was slightly after dark when we said goodnight and headed back to our campsite in Sarasota’s north end.  Had some power issues with the coach when we got back which caused us some stress for awhile but at least the night air was thankfully cooling down and we were able to resolve the issue.  And that catches me up for Monday.

Had some running around to do this morning so Pheebs, Kelly and I were off first stopping at an RV store to check out a couple electrical things.  From there it was Wal-mart and after that Kelly slipped into a store called Burlington Factory.  On all these stops I stayed in the Jeep with Pheebs because it was just too hot and humid to leave a dog in a vehicle by itself.  A couple burgs at Culvers.  It was about the burger stop that the Sarasota traffic finally wore me down causing me to have myself a little melt-down.  Not pretty.  ‘ 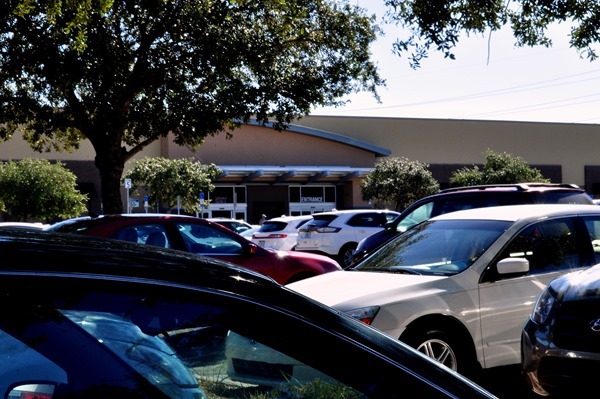 Took our Walmart groceries home then turned right around headed for Jean’s place.  I just couldn’t believe the traffic and it’s not even the busy season yet.  We landed at Jean’s shortly after 1 and spent a relaxing afternoon looking at some old Tavistock home town photos on my computer.  Soon as we come in Jean turns on the A/C for us then slips into a warm sweater, mitts, ear muffs, wooly socks and a big furry warm hat.  Well Okay, the sweater part is true.  I think I dozed off in one of her comfy chairs a couple times. 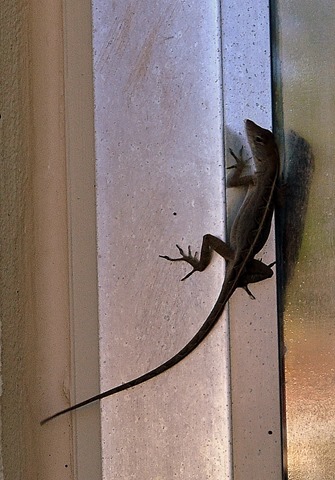 Kelly had liked the looks of our ribs Sunday night at Miller’s Ale House so it was decided to head back to the Ale House again for their Monday night rib special.  We all piled into the Toyota and ‘Speedy Gonzales’ whipped us around through the traffic again and minutes later we were seated inside Miller’s Ale House.  Kelly and I had the special while Jean scared up some chicken wedges.  When our order came my eyes widened like a couple saucers when I saw the size of the ribs.  The rack of ribs on my plate was well over a foot long.  I hadn’t seen so many spare ribs in one place like that before.  Guess it shows I really don’t get out much.  I proceeded to hurt myself when I promptly fell into the trap of overeating.  Had stomach cramps for the rest of the night and  you would think after having been so sick last week I would know better.  Nope:(( 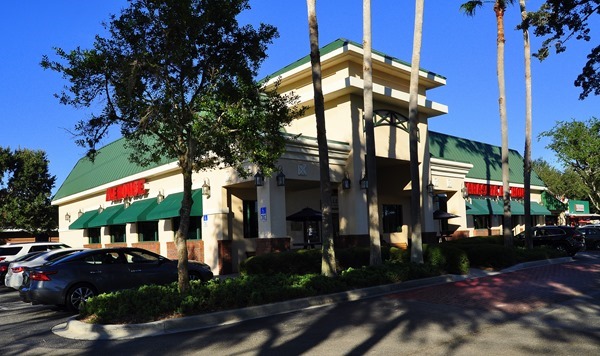 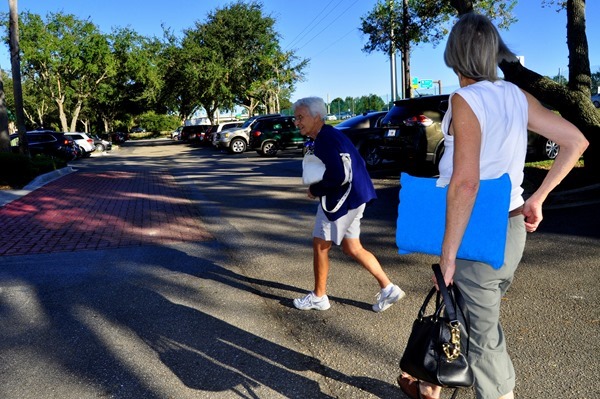 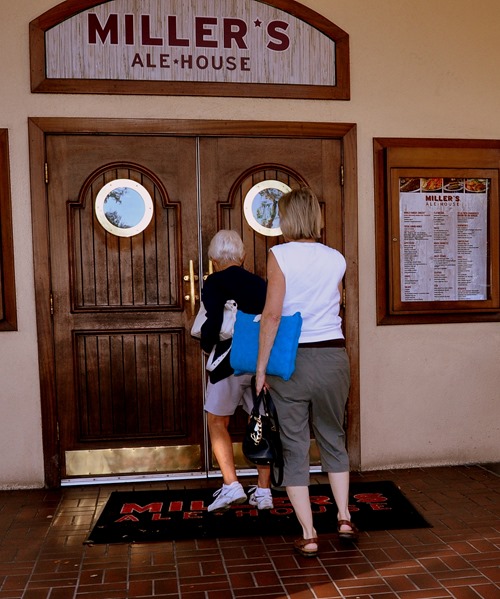 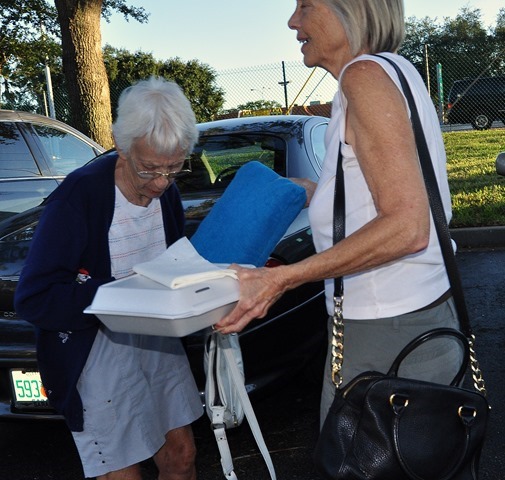 “HEY, I THINK THEY FORGOT MY BROCCLI STICKS”!!!!

Jean safely rocketed us back through the heavy traffic and again it was only minutes before we were again at her place.  It was going on 7 o’clock so we gathered up our stuff, loaded Pheebs into the Jeep, said goodnight to Jean and blasted ourselves north up I-75 back to the rig.  So nice to get back to our little traffic free sanctuary east out Fruitville Road and so glad to be out of the bumper-car road race.

I’ve decided to give up my sleeping pills.  They don’t seem to work anymore and lately I have been waking up with bad headaches.  I’m also wondering if they could have been contributing to my currently weakened medical condition.  My day started at 3 a.m. so I guess I had just better get myself used to much longer days from here on in.

Not feeling well all day Sunday I didn’t have enough energy left Sunday night to finish the post I had started earlier in the day so had to keep it short.  Aside from a few photos in the cooler morning air I didn’t get any of Jean, her place, or our supper at the Ale House Sunday so I tried to make up for a bit of that today.

GROANER’S CORNER:(( For his final project in a statistics class, a student decided to conduct a survey. He chose to find out peoples' favorite pastimes. The teacher required that he sample at least 100 people, so he started out his project visiting a fairly large apartment building near the university.  He knocked on the first door and a man answered.  "Sir, what is your name?" asked the student. "John." "Sir, I'm doing a school study and would like to know what is your favorite pastime?"
"Watching bubbles in the bath," came the reply.
He liked the esoterical answer and continued down the hall, until he came to the next door.
He asked again, "Sir, what is your name ?" "Jeff."
"Sir, Would you please tell me your favorite pastime?"  "Watching bubbles in a bath," was the answer.
Quite amused and confused, he went on to ask a good number of people in the building and all of them had the same pastime..."watching bubbles in a bath". He left the building and walked across the street where there were several row houses, to continue the survey.  At the first house, he knocks and an attractive girl opens the door.
Our surveyor starts again - "What is your name?"
"Bubbles."

When the waitress in a New York City restaurant brought him the soup du jour, the Englishman was a bit dismayed. "Good heavens," he said, "what is this?" "Why, it's bean soup," she replied. "I don't care what it has been," he sputtered. "What is it now?"

- He who laughs last thinks slowest.
- Depression is merely anger without enthusiasm.
- The early bird may get the worm, but the second mouse gets the cheese.
- I drive way too fast to worry about cholesterol.
- Support bacteria. They're the only culture some people have.
- Monday is an awful way to spend 1/7 of your week.
- Get a new car for your spouse. It'll be a great trade!