LEXINGTON VIRGINIA TO SOMEWHERE NORTH OF STATESIDE NORTH CAROLINA…..STILL NOT UP TO PAR:((

Unlike our usual traveling selves we were not on the road in the pre-dawn hours but some of our welcome overnight guests were.  In unknown areas it’s always comforting to have a few other RV’ers or trucks scattered about and last night it was half a dozen trucks which were not a bother at all.  In fact one fella had pulled in a few spaces over and left his engine running but as darkness fell he backed his rig up about 3 lengths and we like to think the driver did that out of common courtesy for us.  Hmmm, wonder if he/she was a fellow Canadian:))

Have definitely moved up another notch on the good old ‘feeling better’ scale and I think much of that had to do with a desperately welcome good night’s sleep for a change.  Had to use a powerful sleeping pill to do it though.

ROLLING ALONG THROUGH THE APPALACHIAN MOUNTAINS

We had the big wheels rolling at 8:30 and were soon southbound on I-81.  What a gorgeously beautiful morning it was again as we slipped along over hill and dale around gently rolling curves.  Clear blue skies and scenery that went on forever.   Sure is a picture perfect part of the country and I’m glad we finally had a chance to have a look at it.

I could tell right away I was solidly back in the driver’s seat again handily taking charge of my surroundings.  We encountered a few long winding grades and the The Big EEE never missed a beat and I’m thinking it all has to do with blog reader ‘Chris the Jeep Guy’ taking the time last winter in Congress to disassemble, clean and reassemble our O2 sensor one morning.  We have not had a speck of trouble since he did that.  Don’t know if your still out here Chris but a great big ‘Yahouie Louie’ to you:))))

Traffic was lighter this morning but feeling a little drained around 11 we decided to take advantage of a Cracker Barrel again only this time for some breakfast.  Several folks have mentioned I should be eating some eggs so eggs it was at the Barrel.  Soooooo good.  As generally always happens we can never eat all our food and end up with enough stuff to last us for supper.  Today was no exception as our generous waitress loaded our Bowser bag with extra dinner rolls, butters and jams as well as two piping hot full cups of coffee to go.  One look at me and I’m convinced she thought I was a homeless person.  We had to wheelbarrow our goodies out in a shopping bag. 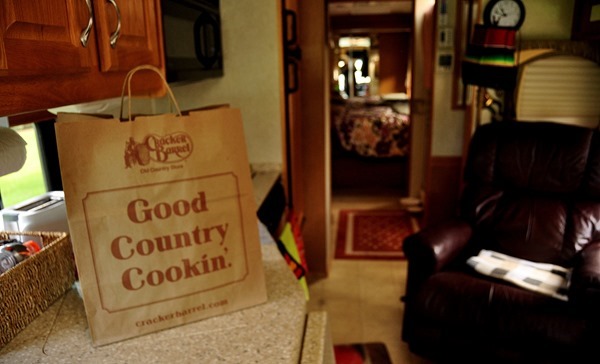 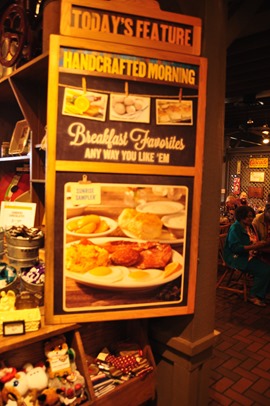 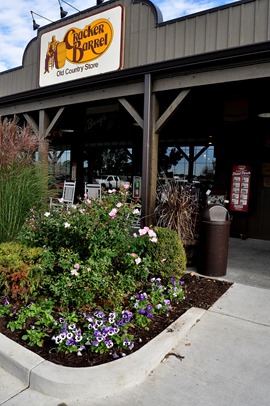 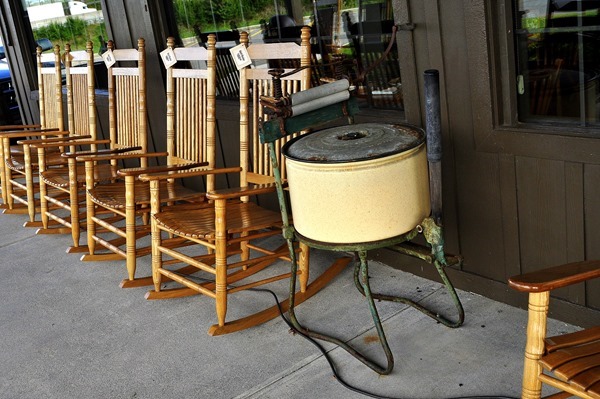 Feeling a little under the weather I rested in the rig for about 40 minutes before we hit the road again and as soon as we had ourselves rolling I rallied and felt perfectly fine.  Might have even had myself a quiet little whistle.  Our conversation finally centered on which route to take.  We were coming up on a couple options and needed to make a decision before we blew on by the exits.  I was still leaning towards my I-81 and 26 heading through Asheville to Augusta Georgia.  Following Triple AAA’s Triptic Kelly came up with some new plans which would get us off I-81 earlier and head us on down through Charlotte then pick up a secondary highway heading to Augusta.  Well boys you know there’s no use winning anything when that female mind is made up so at the junction of I-80 and I-77 I swung that Motorhome steering wheel hard left and headed due south. 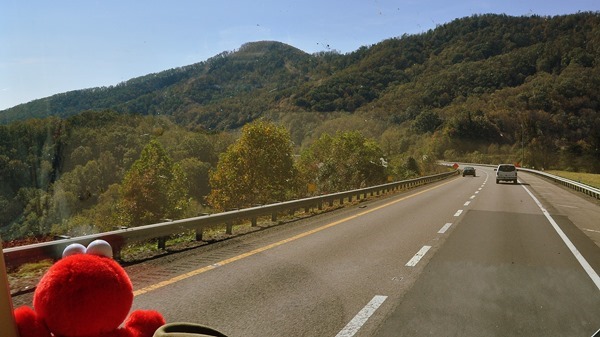 ELMO HAS REALLY BEEN HAPPILY ENJOYING HIS VERY FIRST EVER RV TRIP…..HE SURE GIGGLES A LOT

Along about 1 o’clock I could tell I was beginning to fade yet again so had my trusty navigator plot us a course to the nearest standard safe port and sure enough using her Blackberry for the first time as a GPS she found us a Walmart just a short distance dead ahead.  Oh how welcome it always is at the end of a travel day to see that big old blue Walmart sign.

After seemingly driving through Virginia forever yesterday and today it was nice to see a new State finally show up.  No idea where we’ll be Thursday night but tonight we are somewhere north of Stateside North Carolina…………….. Don’t know why but my energies keep tanking.  Tried taking Pheebs for a short walk late this afternoon but had to return quickly on rubbery legs and hit the washroom.  Told Kelly I wanted to try walking to the Walmart store and jokingly told her to come along in case she had to bring me back in a shopping cart.  That nearly happened and I was so glad to make it back to the rig and flop myself into my recliner.  Whatever it is I have seems to come and go.  One minute I’m feeling reasonably good and the next minute I feel like a big steam roller has run over me……...then backed up. 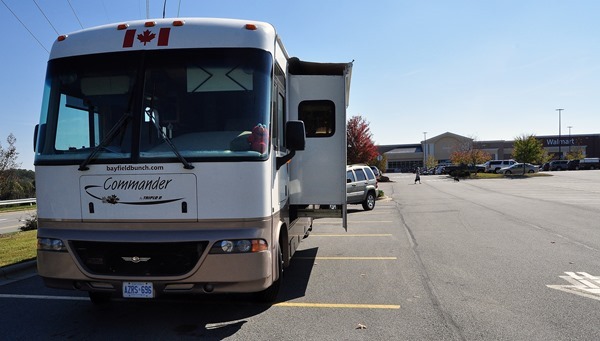 GROANER’S CORNER:(( By the time the sailor pulled into a little town every hotel room was taken. "You've got to have a room somewhere," he pleaded. "Or just a bed, I don't care where."  "Well, I do have a double room with one occupant - an Air Force guy," admitted the manager, "and he might be glad to split the cost. But to tell you the truth, he snores so loudly that people in adjoining rooms have complained in the past.  I'm not sure it'd be worth it to you."  "No problem," the tired Navy man assured him. "I'll take it." The next morning, the sailor came down to breakfast bright-eyed and bushy tailed. "How'd you sleep?" asked the manager. "Never better." The manager was impressed. "No problem with the other guy snoring?" "Nope. I shut him up in no time," said the Navy guy.  "How'd you manage that?" asked the manager.  "He was already in bed, snoring away, when I came in the room," the sailor explained. "I went over, gave him a kiss on the cheek, and said, 'Goodnight beautiful,' ….....and he sat up all night watching me."

Once upon a time there was a non-conforming sparrow who decided not to fly south for the winter. However, soon the weather turned so cold that he reluctantly decided to fly south. In a short time ice began to form on his wings and he fell to Earth in a barnyard, nearly frozen solid. A cow passed by where he had fallen, and crapped on the little sparrow.The sparrow thought it was the end, but the manure warmed him and defrosted his wings!  Warm and happy, able to breath, he started to sing.  Just then a large cat came by, and hearing the chirping he investigated the sounds. The cat cleared away the manure, found the chirping bird, and promptly ate him.

The Moral of the Story:

Everyone who craps on you is not necessarily your enemy

Everyone who gets you out of crap is not necessarily your friend.

And if you're warm and happy in a pile of crap, you might just want to keep your mouth shut.