ELKIN NC TO THOMSON GEORGIA……A GREAT DRIVING DAY BUT IT’S ALREADY TOO WARM FOR US:(( 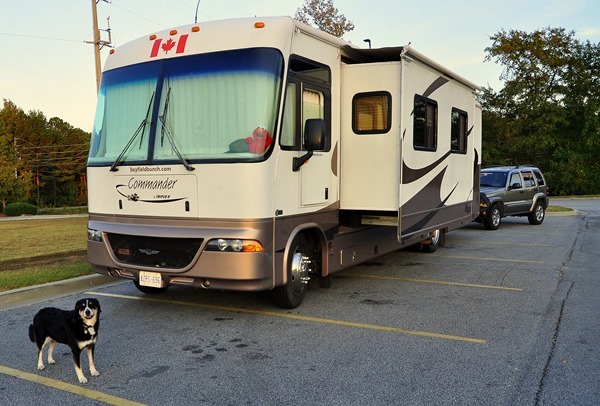 THOMSON GEORGIA
Not one of our quieter Walmart overnighters with traffic whooshing by not far away but it was what it was.  My main malaise this morning was simply a poor night’s sleep.  We were up and on the road under cloudy skies at 8:15 and with a quick fuel stop we were soon southbound on I-77
--------------
Turned out to be a great driving day.  Traffic down to Charlotte NC was surprisingly light.  Good roads, super scenery and everything went off without a hitch.  Couldn’t believe how good I was feeling compared to Wednesdays later afternoon and early evening.  Figured I had better take advantage of that so we kept the hammer down and put some miles behind us.  If I’d had any hayseeds or back roads country dust left in my ears Charlotte’s morning traffic quickly took care of that and blew it all out this morning.  Not many photos today.  Just sat back and enjoyed the scenery.  Especially liked the long sweeping hills between Columbia SC and Augusta Georgia.  Big white puffy clouds stacked atop each other against a blue sky made it a nice day.  And then there was the heat:((
-----------------
Kelly especially likes Cracker Barrels daily $5.99 specials so when she spotted a Cracker Barrel sign ahead there was no stopping us from heading on in.  I wasn’t particularly hungry but when I saw the special was Turkey with mashed potatoes & gravy with biscuits and dressing I knew I couldn’t resist.  Ohhhh so good but I did forego the biscuits.  Kelly likes to blast around in the gift shop but just as soon as I have dribbled the last morsel of food down the front of my shirt I am always up from the table and quickly back to the rig with a little treat for Pheebs.  No gift shop browsing for this old Scrooge. 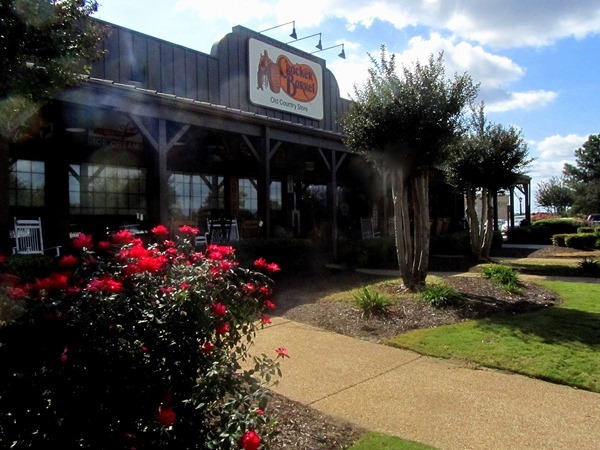 CRACKER BARREL IN AUGUSTA GEORGIA
Sorry we didn’t get into your neck of the woods Jenny J but maybe it’s just as well.  With not knowing for sure if this is a strain of the flu I have I certainly did not want to pass it on to others.  Kelly has handled all the people contacts this trip and I have kept myself mainly confined to the rig except for a walk through Walmart Wednesday night where I was careful not to make any contact with the local Walmartians.  If anyone spoke to me I just tweaked my ears and blinked by eyes twice holding three of my my little fingers upside down with a backwards sweeping motion.  Would you believe I actually made contact!!
---------------
Sitting here typing this I have my little green fan blowing warm air on me.  So far so so good, still tolerable.  Sure beats the cold winter air back home in Bayfield.  Snowing in Cambridge today.
-----------------
Okay, better get me some corrections going here.  First, Gene S in part said “you turned south at the intersection of I-81 and I-77, not I-80”.  In Wednesday’s post I said we were north of Stateside and that should have read Statesville.  Chris the Jeep Guy in part said, “I thought the Mass Air Flow Sensor is what was causing your problems”.  I had mis-identified it as an 02 sensor.
-----------------
There is a chance we may reach Sarasota late Saturday sometime but no promises.  Boy oh boy this sure has been a bit of an ordeal since leaving Spencerport NY last Saturday.  For sure I am going to need some quiet time to de-stress for a bit when we get there. 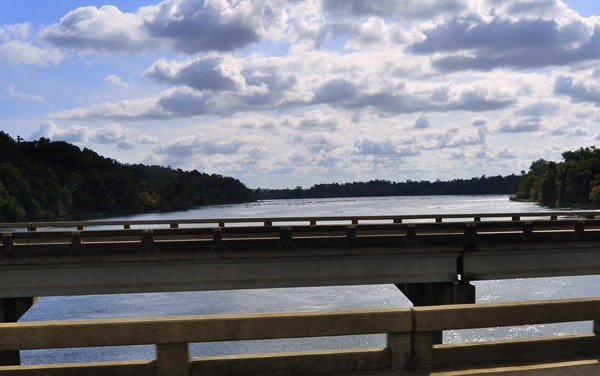 MIGHT BE THE SAVANNAH RIVER
In the morning I think we’ll stay on 77 then pick up highway 129 and make tracks for Macon Ga. where we’ll hop aboard I-75 and smoke it down to Florida.  Thanks to a reader for that suggestion.  The highway that is not the smokin part.
-----------------
And here’s a very first ever very unofficial political poll from the Bayfield Bunch on the road.  Since crossing into the United States a week ago we have traveled through the States of New York, Pennsylvania, Maryland and Virginia and have noted the usual political candidate support signs stuck in people’s lawns.  So far the Trump support signs are outnumbering the Clinton support signs ‘about’ 100 to 5.  And about this unofficial poll of ours I have no comment!! 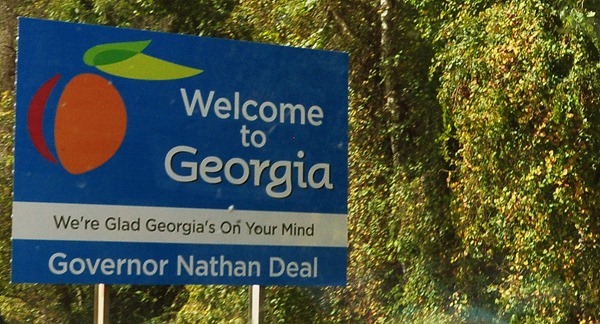 GROANER’S CORNER:(( After the revival had concluded, the three pastors were discussing the results with one another.  The Methodist minister said, "The revival worked out great for us! We gained 4 new families."  The Baptist preacher said, "We did better than that! We gained 6 new families."  The Presbyterian pastor said, "Well, we did even better than that! We got rid of our 10 biggest trouble makers!"
--------------
About a month ago, a man in Amsterdam felt that he needed to confess, so he went to his priest, "Forgive me Father, for I have sinned. During WWII I hid a refugee in my attic."  "Well," answered the priest, "that's not a sin."' "But I made him agree to pay me 200 Euros for every week he stayed." "I admit that wasn't good, but you did it for a good cause."  "Oh, thank you, Father; that eases my mind." He paused for a moment and then said, "I have one more question..." "What is that, my son?" "Do I have to tell him the war is over?"
Posted by Al Bossence at 10/27/2016