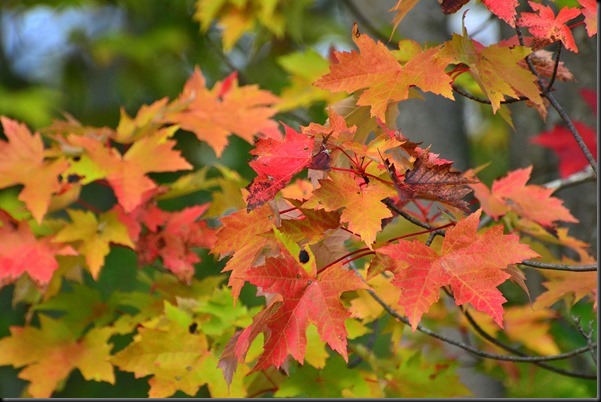 A FEW SPLASHES OF AUTUMN COLOR HERE AND THERE BUT OVERALL OUR FORESTS ARE STILL VERY GREEN
A mixture of Sun and cloud on a mild Sunday morning found Pheebs and I poking along a few area rural roads again.  The thought occurred to me that one month from this morning we will be on the road in the Motorhome and it will be day one of this years southern winter travels.  As usual my excitement is tempered by my usual apprehension and that apprehension will not dissipate until the very morning we get the big wheels rolling and on our way.  From that moment on the adventure becomes real and the mind kicks in and focuses clearly on the travels ahead. 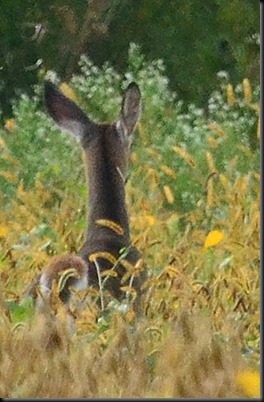 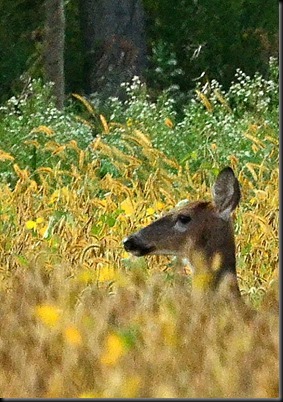 THEY QUICKLY BOUNDED OFF AND HID IN AN ADJOINING BEAN FIELD 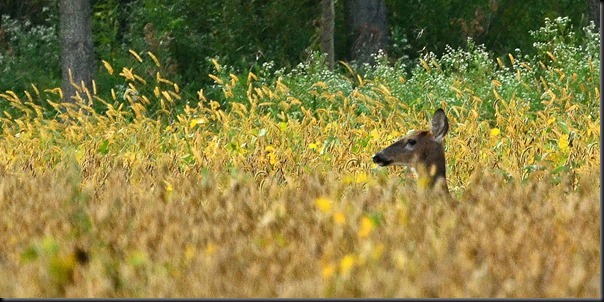 Couldn’t seem to quite get myself into the swing of things this morning so we didn’t go too far.  But far enough to snag us a Burrito and carrot muffin with a coffee to go in Goderich as we passed through one end of the town and out the other. 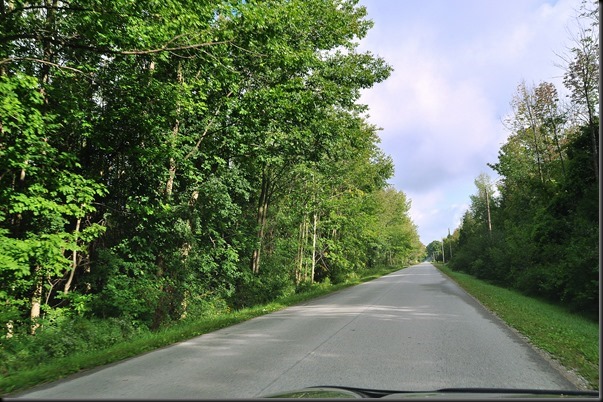 NO SIGNS OF AUTUMN ALONG THIS FORESTED ROAD YET 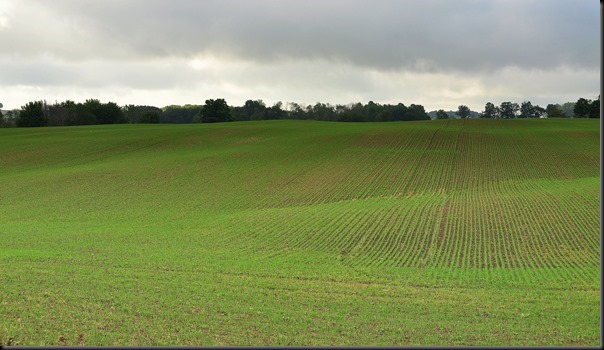 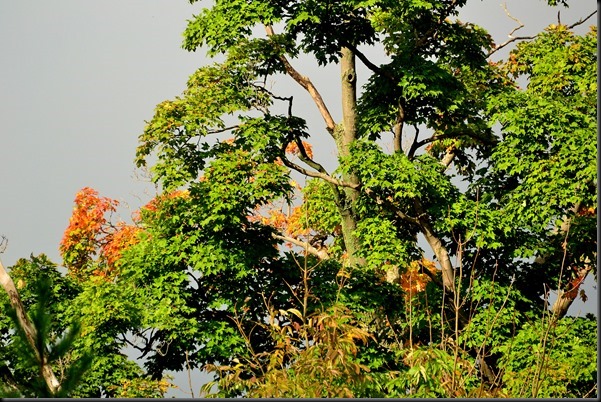 A SLIGHT SPLASH OF COLOR AMIDST TREES OF GREEN
Spent an enjoyable few hours in my recliner this afternoon with my Rand-McNally Atlas and laptop computer on my lap.  Oh, and a magnifying glass to see all the small print, roads and routes on each page. 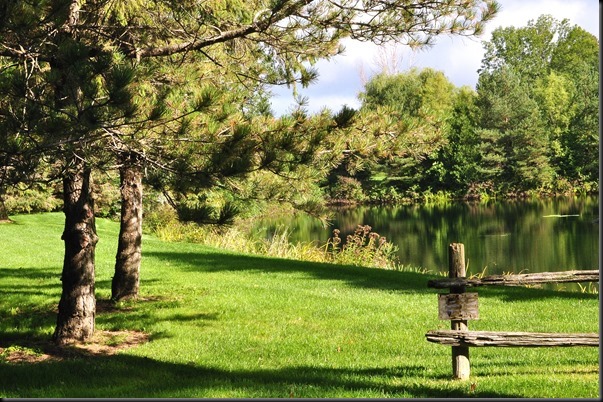 A VERY RELAXING RURAL FARM PROPERTY
I am certainly becoming increasingly familiar with the Eastern side of the United States as I bounce around from page to page in my Atlas and screen to screen with Google’s computer maps.  It is the area between Spencerport New York and Sarasota Florida I am concentrating on.  Between a lot of back and forth and extensive use of my magnifying glass I think I have finally hammered out a basic route which may or may not include Harrisburg Pennsylvania, Asheville North Carolina, Augusta Georgia, and Ocala Florida. 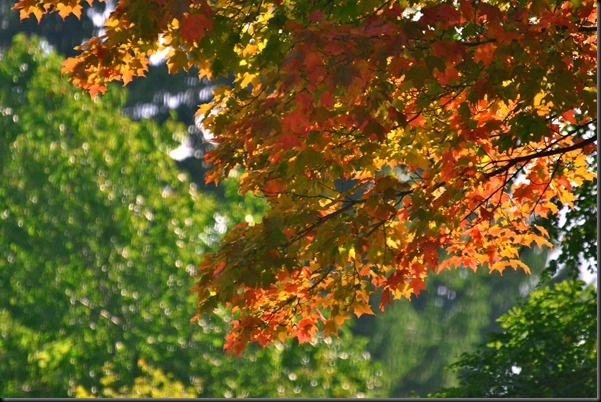 Although very much looking forward to seeing new scenery along the way and getting a feel for possible future RV travels in the area this won't be a leisurely wander for us.  We want to get down to Sarasota and see Aunt Jean as soon as we can and that will be priority for that Spencerport/Sarasota stretch of the trip.  Aunt Jean's health has been slipping. 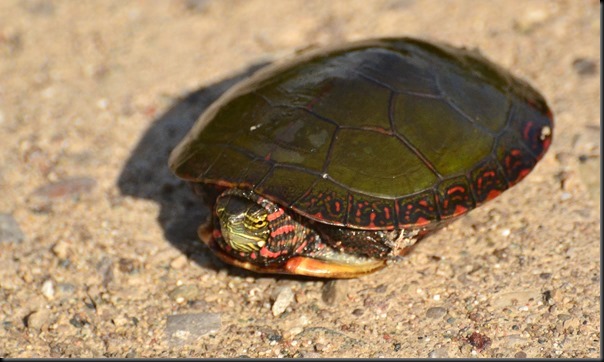 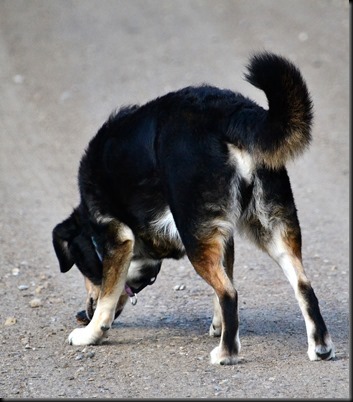 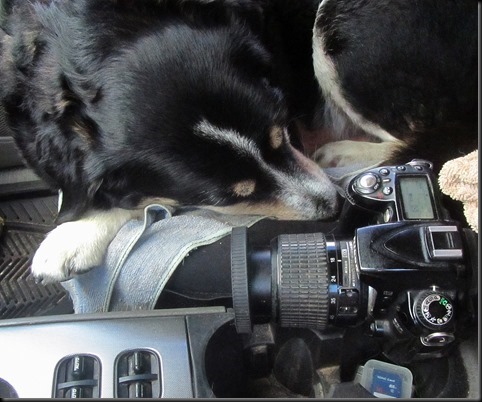 YEP, IT’S TIME TO HEAD HOME NOW:))
When we leave Sarasota it will be straight to Congress Arizona for us probably slipping up through Texarkana to Wichita Falls joining I-40 at Amarillo east of Tucumcari and Albuquerque New Mexico.  If we take that route it will bring us to Congress Arizona via our northern route through Flagstaff, Williams, the Chino Valley, Prescott, Iron Springs Road, and Yarnell.  If the house sells chances are we may not use this memorable route again and I would like to drive it just one more time.  The drive from Ash Fork to Congress is one of my fav's just like the one from Tucson to Why Arizona.  Actually I have many favorite drives in the Southwest with those being just two of them:))

GROANER’S CORNER:)) A lawyer walks into a bar and sits down next to a drunk who is closely examining something held in his fingers. The lawyer watches the drunk for a while till he finally gets curious enough to ask what it is.  "Well," said the drunk, "it looks like plastic and feels like rubber."  "Let me have it," said the lawyer. Taking it, he began to roll it between his thumb and forefinger, examining it closely. "Yes," he finally said, "it does look like plastic and feel like rubber, but i don't know what it is. Where did you get it?"  "From my nose," the drunk replied.
----------------------
What's round and bad tempered? A vicious circle.
--------------------
Driving to work, a gentleman had to swerve to avoid a box that fell out of the truck in front of him. Seconds later, a policeman pulled him over for reckless driving. Fortunately, another office had seen the carton in the road. The policemen stopped traffic and recovered the box. It was found to contain large upholstery tacks.  "I'm sorry, Sir," the first trooper told the driver, "but I am still going to have to write you a ticket." Amazed, the driver demanded to know the reason.  The trooper replied . . . "Tacks evasion."
Posted by Al Bossence at 9/18/2016