SADDLED UP MY WHEELBARROW AND BEGAN MY ANNUAL AUTUMN ROUND-UP 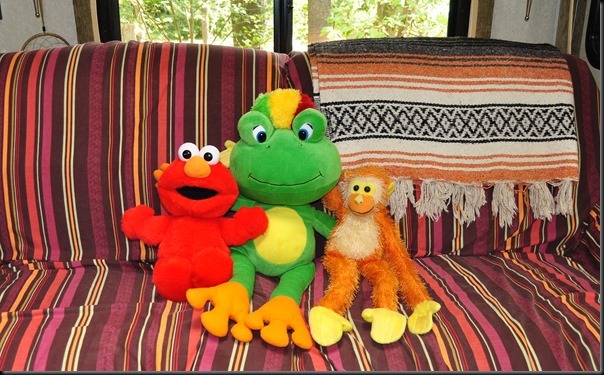 ON SUNDAY KELLY BROUGHT HOME ANOTHER ROADCREW MEMBER FOR THIS YEARS SOUTHERN TRAVELS…. HIS NAME IS ‘MELON’ AND HE’S THE GREEN GUY IN THE CENTER…. ‘ELMO’ AND ‘MONK’ ARE HAPPY TO HAVE HIM ON THE BAYFIELD BUNCH TEAM:))

First thing I did this morning around 5:30 when I stepped out the door with Pheebs was to cast my eyes skyward up through the pine trees and sure enough in the cool crisp, clean air I saw diamonds sparkling high above in an inky black velvety sky.  Through the pine branches I also spotted a crescent Moon high up in the East.  Clear skies meant a sunny day would soon be upon us and that in turn meant I would not have to go back in the house, crawl into bed and pull the blankets over my head.  And that alone made for a positive start to this guy’s day.  If the old Man in the Moon had been peering down through the pine trees he would have seen a slightly whiskered and sleepily bedraggled older happy face feller wearing dark blue Gummy Bear pajamas beaming a big happy smile right on back up at him:)) 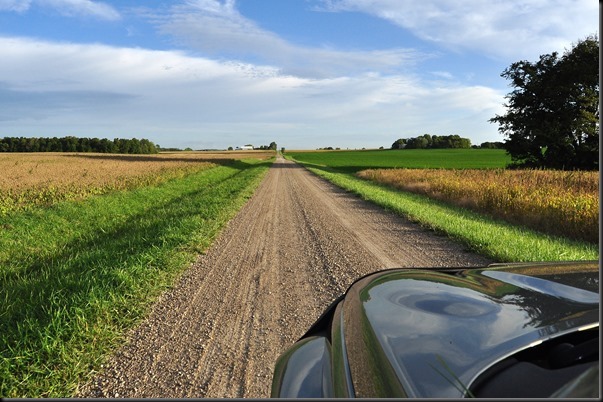 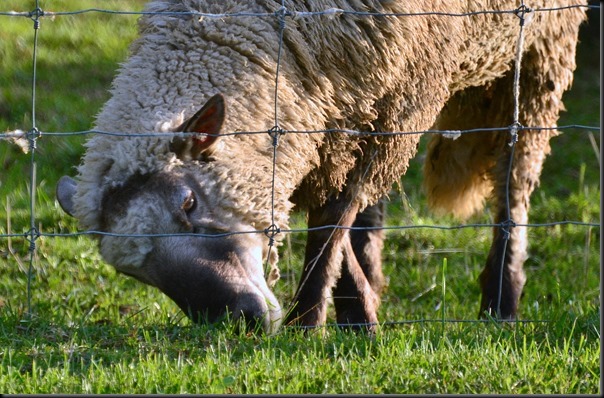 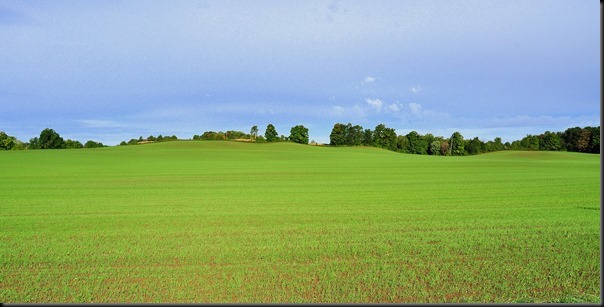 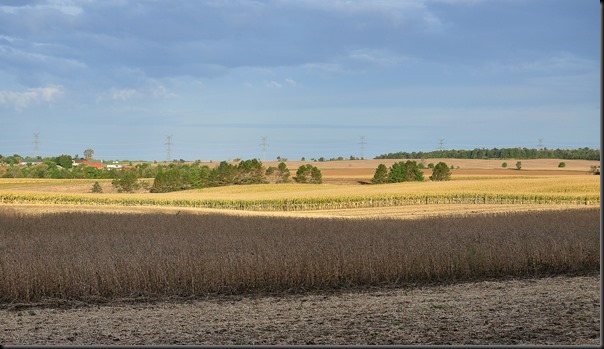 A FEW STOPS ON OUR WAY TO THE MARSH

Pheebs and I had ourselves a nice walk in the Marsh this morning and I couldn't help but notice the silence which enveloped us.  Even the few Crickets I heard seemed far away.  Nothing airborne in the Marsh's air, no birds and not even a single flying insect.  The only movements we saw were the rustling of leaves as Westerly winds played lazily through acres of gently swaying trees. 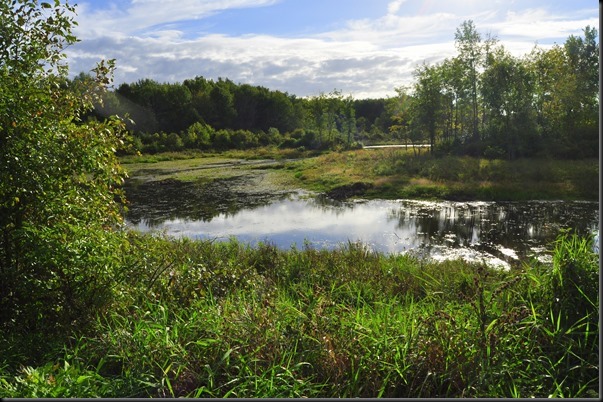 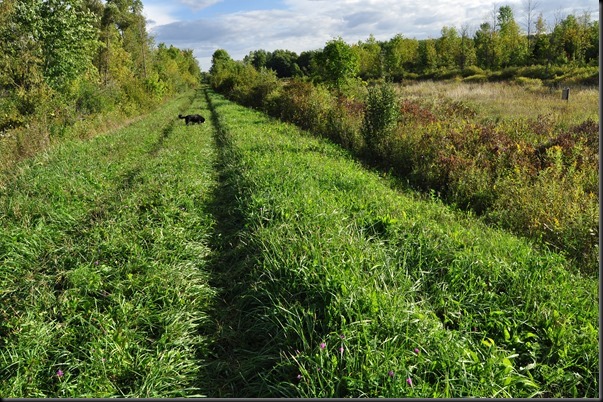 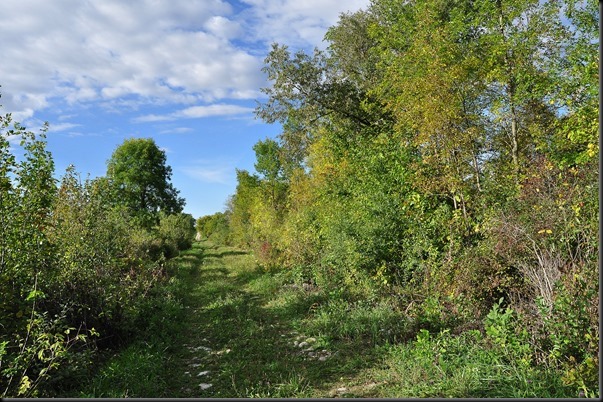 While walking we could hear sporadic shotgun blasts (pheasant hunters) around us off in the distance and I was reminded again as I always am when I hear hunter's in the woods how truly fortunate I am not to be one of them.  My Dad was a hunter in his earlier days but gave it up by mid age and sold his guns.  My Mother was an animal lover and although my Dad's genes led me in the hunter direction as an young teen thankfully my Mother's genes prevailed and I was able to turn away from the hunting instincts.  I credit my Mother's stronger genes for my love of animals and I am always so grateful for that.  Actually I do enjoy hunting but it's hunting with my cameras and being able to share that enjoyment each day with my readers that I am probably most grateful for. 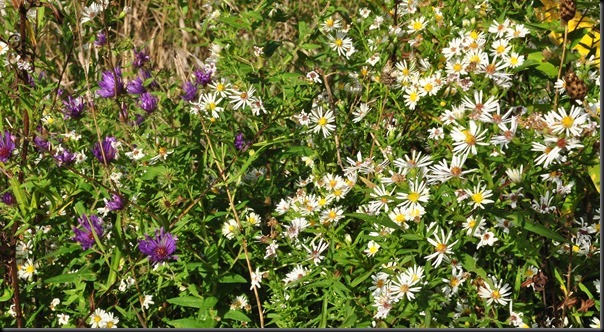 AUTUMN WILDFLOWERS ARE ABUNDENT THIS TIME OF YEAR 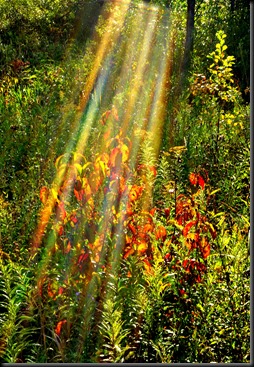 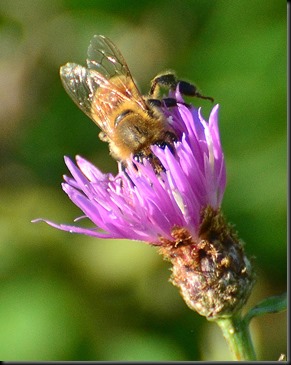 Saddled up my wheelbarrow this morning and began the annual round-up of summer’s lawn and garden ornaments.  We have a lot of little things hanging and sitting around outside and it's always a bit of a search rounding up the main group of things as well as the strays and stragglers.  Feeling as energetic as I did I was actually able to get half a dozen little jobs done by multi-tasking my way right along.  It reminded me of myself not that many years ago when I was able to organize a number of little projects and knock them all off 1,2,3:)) 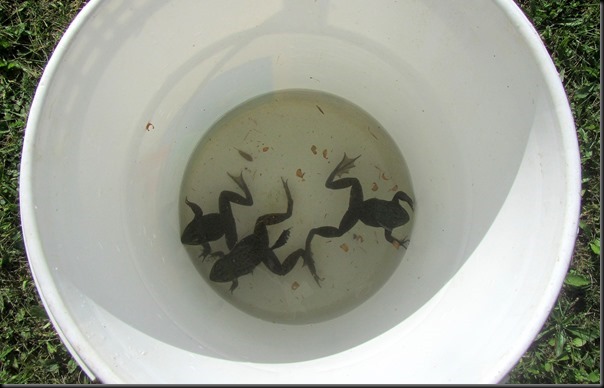 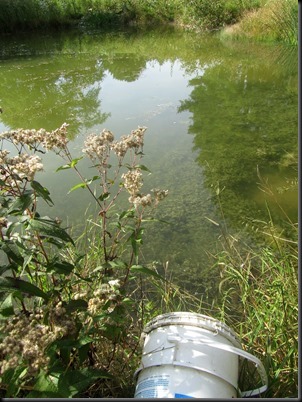 Hey Marie, I really like that KB Microfiber Cleaning Cloth you gave me Saturday.  Your right it's great for cleaning windows.  No streaks and no lint.  Did the Jeeps windows and how nice not to have to keep going over them because of annoying streaks.  I will definitely be looking into getting more. 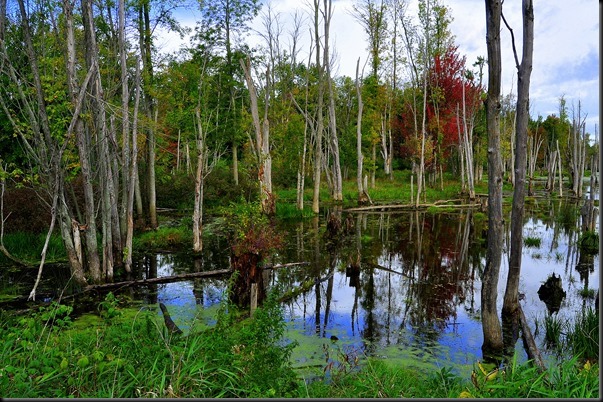 A TOUCH OF COLOR IN THE MARSH 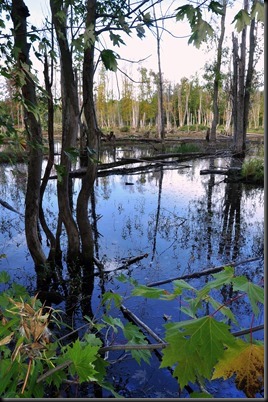 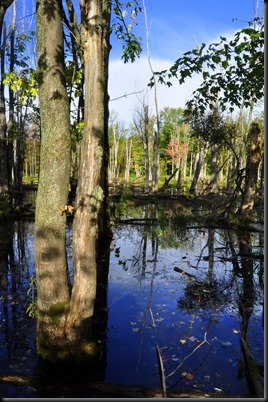 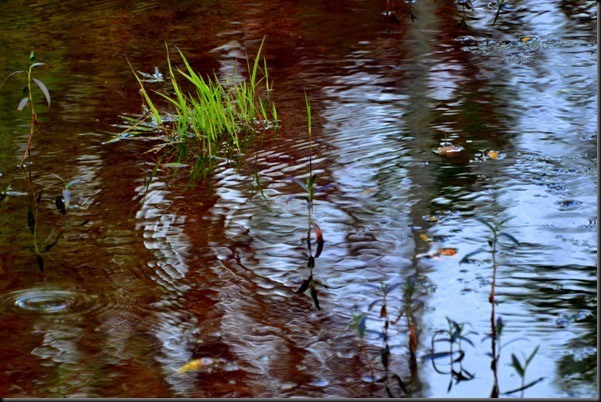 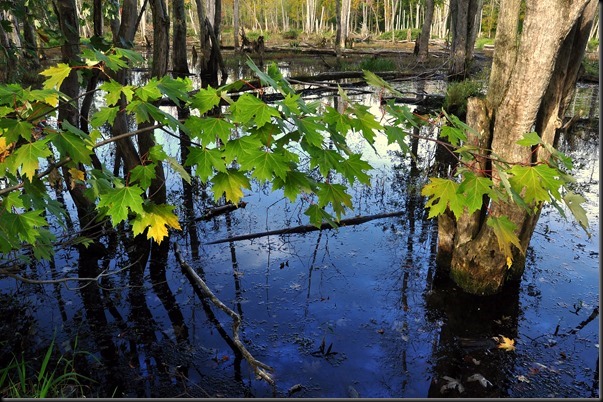 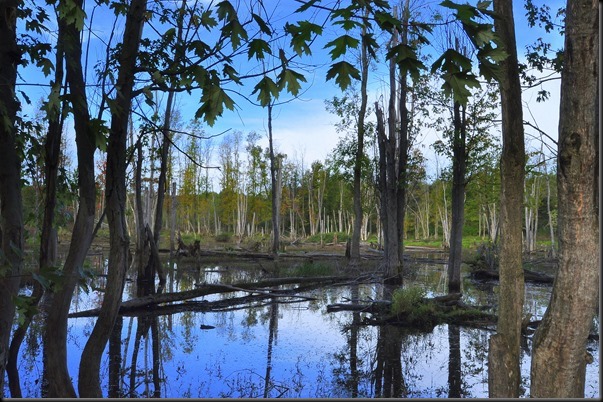 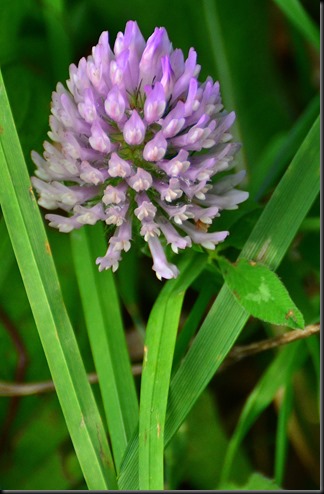 In my Monday night post I mentioned 'The Golden Years' and this morning found out something I never knew.  Seems there is another meaning for that saying which may have been the original idea for it.  Long time blog reader Wilf Blakey from Kirkland Lake way up there in that Northern Ontario place in an email in part writes, 'You mentioned the golden years in your blog tonight. Do you not know the proper meaning of that expression? I have known it for many a year, especially since I retired about five years ago. It means that it takes much gold to live and exist after you retire from the workforce ( even before we retire for that matter) wouldn't you agree'?........Well yes I would agree with that Wilf but seeings how I have only heard it in reference to the many trials, travails, and tribulations of aging Seniors I think I'll just stick with that one.  Say, did you get my email a couple weeks ago Wilf or is Kirkland Lake already buried under 10 feet of snow for the winter:)) 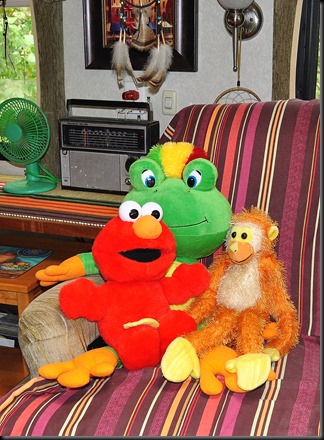 Many years ago, a fisherman's wife blessed her husband with twin sons. They loved the children very much, but couldn't think of what to name their children. Finally, after several days, the fisherman said, "Let's not decide on names right now. If we wait a little while, the names will simply occur to us."
After several weeks had passed, the fisherman and his wife noticed a peculiar fact. When left alone, one of the boys would also turn towards the sea, while the other boy would face inland. It didn't matter which way the parents positioned the children, the same child always faced the same direction. "Let's call the boys Towards and Away," suggested the fisherman. His wife agreed, and from that point on, the boys were simply known as Towards and Away.
The years passed and the lads grew tall and strong. The day came when the aging fisherman said to his sons, "Boys, it is time that learned how to make a living from the sea." They provisioned their ship, said their goodbyes, and set sail for a three month voyage.
The three months passed quickly for the fisherman's wife, yet the ship had not returned. Another three months passed, and still no ship. Three whole years passed before the greiving woman saw a lone man walking towards her house. She recognized him as her husband. "My goodness! What has happened to my darling boys?" she cried.
The ragged fisherman began to tell his story: "We were just barely one whole day out to see when Towards hooked into a great fish. Towards fought long and hard, but the fish was more than his equal. For a whole week they wrestled upon the waves without either of them letting up. Yet eventually the great fish started to win the battle, and Towards was pulled over the side of our ship. He was swallowed whole, and we never saw either of them again."
"Oh dear, that must have been terrible! What a huge fish that must of been!"
"Yes, it was, but you should have seen the one that got Away...."

The new army recruit was given guard duty at 2 a.m. He did his best for a while, but at about 4 a.m. he fell asleep. He awakened to find the officer of the day standing before him.
Remembering the heavy penalty for being asleep on guard duty, this smart young man kept his head bowed for another moment then looked upward and reverently said, “Amen”