MY MOTORCYCLE IS NOW OFFICIALLY FOR SALE

FROM A DISTANCE I THOUGHT THESE WERE 2 BLUE HERONS BUT LATER EDITING THE PHOTO I REALIZED THEY WERE NOT……..I SHOULD KNOW WHAT THEY ARE BUT JUST CAN’T SEEM TO ACCESS MY MEMORY FILES TONIGHT (UPDATE) 'CORMORANTS'....THANKS GORDON W.
I was startled awake by a familiar sound about 5 a.m. this morning and seconds later in my pajamas I found myself outside hastily making my way across the driveway in the direction of our Motorhome.  Thankfully I had remembered to put my hat on......as well as a raincoat.  It was the pounding of heavy rain on our metal roof I had heard and that of course had spurred my worried mind into overdrive.  What had I left outside?  What doors and windows had I left open?  Oh-no!! The Motorhome windows!!!!!  Not once did my mind remind itself that I had indeed gone around closing windows and doors Wednesday night knowing rain could very well be upon us by morning.  Wasn't until I had got parts of me good and wet that I made it to the Motorhome only to find  all the windows closed and it was only then I remembered closing them earlier.  Now to make my way through the driving rain back to the house.  Soggily, my day was under way. 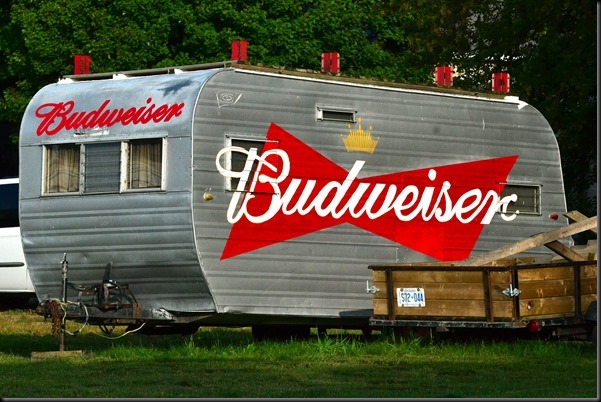 PARKED AT THE HULLETT MARSH ONE DAY LAST WEEK

KIND OF A NICE SET-UP 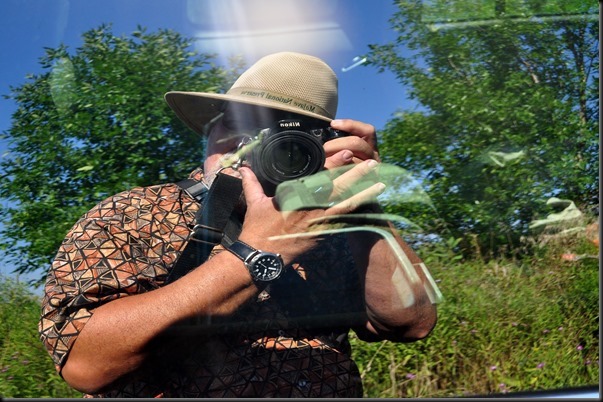 MY IDEA OF A SELFIE I GUESS 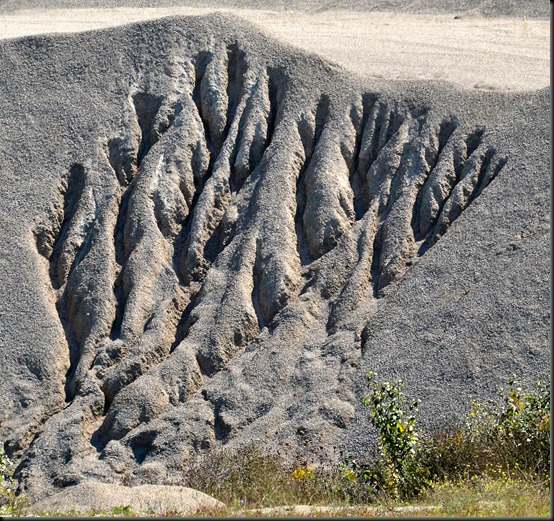 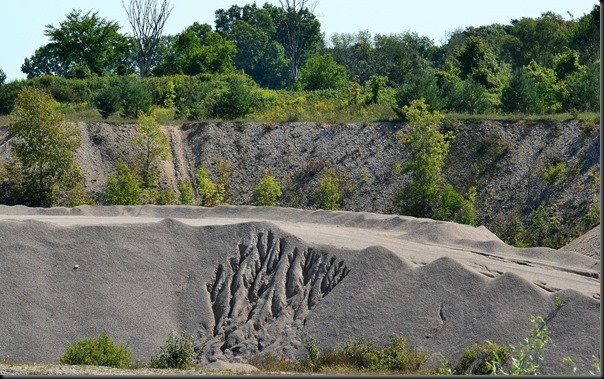 NOPE, JUST SOME WATER EROSION AT A LOCAL GRAVEL PIT 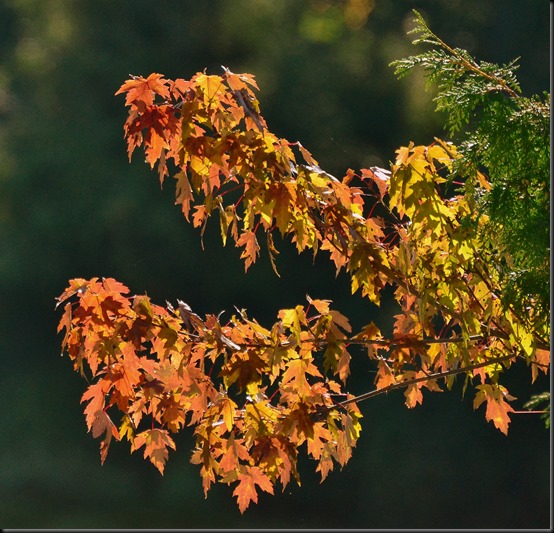 SHOULD BE SEEING LOTS MORE OF THESE AUTUMN COLORS SOON:))
I was hoping the 'Blogger'/'Word Press' problem would have resolved itself overnight but I see all Word Press blogs are still all piled in the basement at the bottom of my list.  If you scroll to the bottom of my 'visible' Bloggers list look for the tiny words which say 'show all' and click that.  The list will then expand to show all the rest of our blogging friends and for now until things are hopefully resolved you can find a number of our 'Word Press' blogging folks unfortunately piled up in the basement.  Judging from feedback I’ve received this is a problem with a lot of folks at the moment:(( 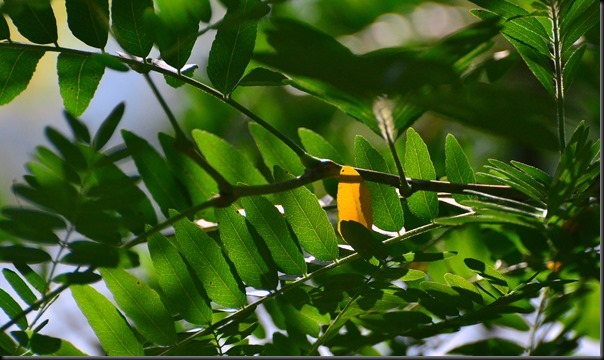 SUNBURST LOCUST TREE JUST OUTSIDE OUR SUNROOM WINDOW Richard walked over shortly before 9 and we hopped into the Jeep and headed off on another one of our semi- monthly cross country coffee tours.  As always a most enjoyably informative couple hours for both of us.  Some old memories, some new ideas, and always some vintage humor along the way:)) 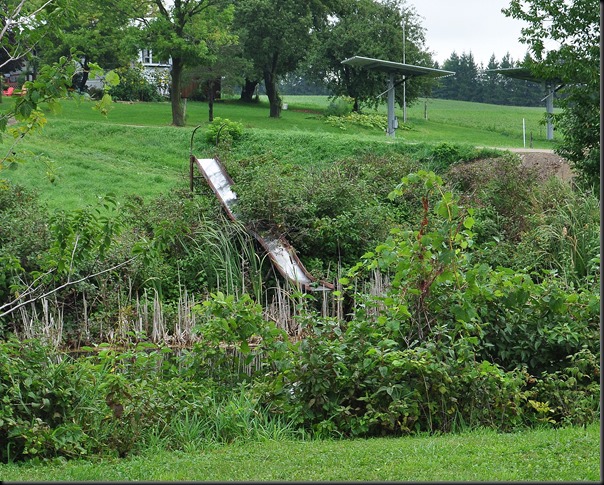 I’M GUESSING THE KIDS ON THIS FARM HAVE LONG SINCE MOVED AWAY Humid again today but not quite as intense as the past couple days and I think I even felt a slight smile breaking out across my face.  And believe me when I have a smile of any kind emanating from my grumpy looking face it is a rare occurrence indeed so you know how good I was feeling about the slightly lower humidity level and prospects of cooler days ahead:))

Finally made a decision about my Motorcycle and it is now officially for sale.  Kelly has put it on Kijiji.  There is no point paying insurance 12 months of the year for something I am not using.  Haven’t even gone through one tank of gas this summer.  My 02 Honda Shadow Aero 1100 is a beautiful bike that deserves to be on the road with someone who has the same biking enthusiasm I once had. 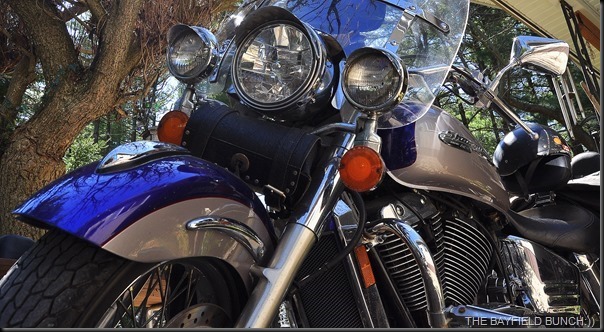 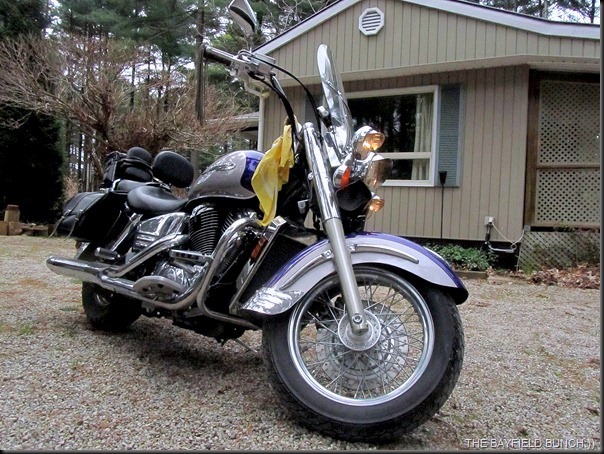 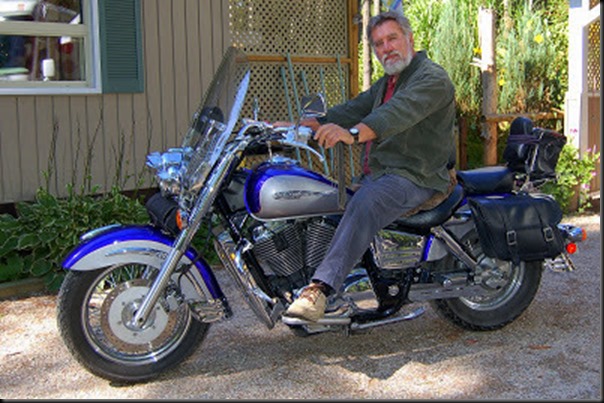 BIKE LOOKS AS GOOD TODAY AS THE DAY THIS PHOTO WAS TAKEN BACK IN 2008….THE BLUE COLOR YOU SEE IS ACTUALLY PURPLE
Pheeb’s ‘Hot Spot’ on her face is looking a bit better day and we’re hopeful the Vet meds will clear the problem up.  She is being very good about not scratching the spot and not trying to rip her ‘sock’ off. 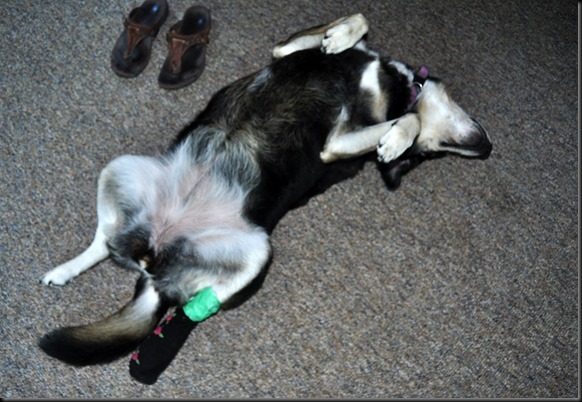 PHEEBE ROLLS OVER TO SHOW OFF HER SOCK 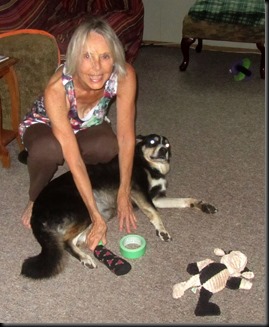 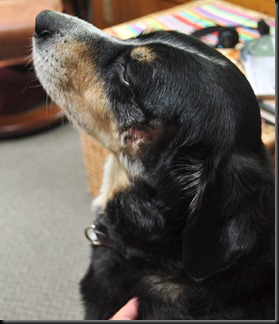 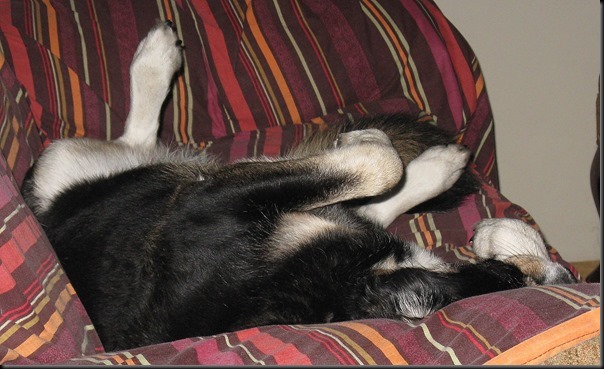 BOTH HERE IN BAYFIELD ONTARIO AS WELL AS CONGRESS ARIZONA PHEEBS HAS HER VERY OWN COUCH….OH AND SHE HAS HER VERY OWN COUCH IN THE MOTORHOME TOO…THE POOR LITTLE WEINER SURE HAS A TOUGH LIFE EH
Pulled out my annual RV ‘to do check-list’ this morning and figured I had better re-write and bring it up to date.  Been using the same paper list now for about 7 years and along with the it being in quite a state of tatterness it really does need some serious updating to be brought further along into the 21rst Century. 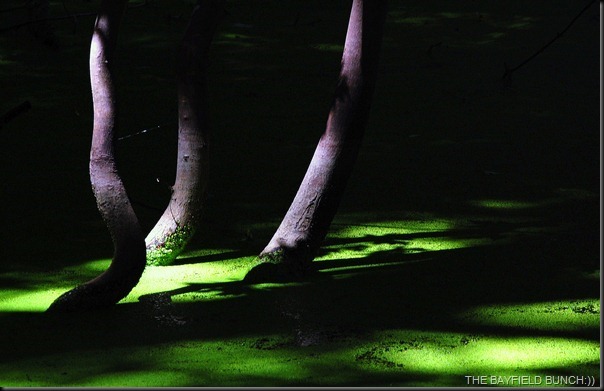 ANOTHER ONE OF MY FAVORITE FILE PHOTOS FROM A FEW YEARS BACK…..TAKEN IN THE HAY SWAMP WEST OF EXETER ONTARIO GROANER’S CORNER:((   Dovey, the baby pigeon was nervous about flying long distance with its mother and grumbled, 'I don't think I can make it, it will be too tiring for me.' Mama pigeon tried to pacify Dovey and said, 'You have nothing to worry about. I'll tie a piece of thread to one of your legs and the other end to mine.' On hearing this, Dovey began to cry. 'Why are you crying baby?' asked the worried mother. Dovey replied, 'You don't want me to be pigeon towed, do you?' -------------------------- Recently a teacher, a garbage collector, and a lawyer wound up together at the Pearly Gates. St. Peter informed them that in order to get into Heaven, they would each have to answer one question.   St. Peter addressed the teacher and asked, "What was the name of the ship that crashed into the iceberg? They just made a movie about it."  The teacher answered quickly, "That would be the Titanic." St. Peter let him through the gate.  St. Peter turned to the garbage man and, figuring Heaven didn't *really* need all the odors that this guy would bring with him, decided to make the question a little harder: "How many people died on the ship?"
Fortunately for him, the trash man had just seen the movie. "1,228," he answered.  "That's right! You may enter."  St. Peter turned to the lawyer. "Name them."