IT WAS IN 2012 WHEN PHEEBS SAID “HURRY UP AND TAKE THE PHOTOS DAD BEFORE THE LAKE TIDE COMES IN”:)) 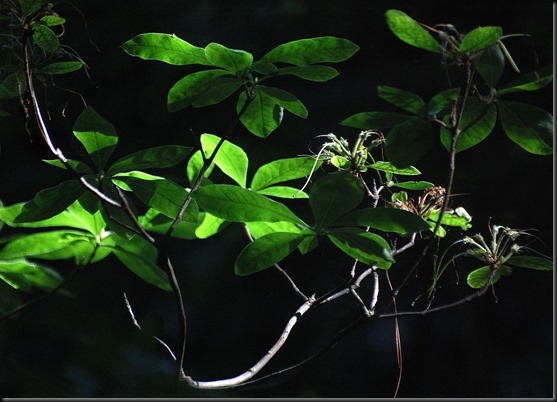 It was our semi-monthly Thursday country road coffee tour for Richard and I this morning with me in the passenger seat this time.  Cloudy wind swept skies with fleeting rain showers as we motored along quite oblivious to the elements.  Again we were both in fine form with our usual very positively spirited inquisitively feeling good rousing conversation.  Always a few great quality hours well spent for me.  Good stuff:)) 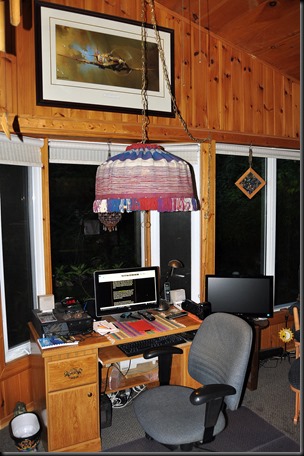 <<< THE SPITFIRE PAINTING (PRINT) I MENTIONED IN MY WEDNESDAY POST

Note to commenter Mike regarding my Wednesday night post.  I was unable to find a Kindle version for Robert Stanford Tuck and ‘Fly For Your Life’.  Seems to be only paperback and hard cover books available.  Thought for sure I  would be able to get a download of the book for my Kindle.  And to Rob K in our ‘Shoutbox’, I was able to find and successfully download ‘Flying Officer X:)) 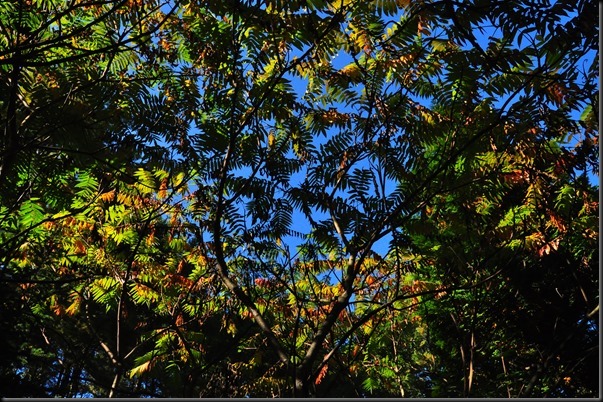 In Wednesday night’s post I mentioned about the water level being down in Lake Huron from just a week ago.  Compared to four years ago the level is hardly down at all.  Remembered some photos I had taken back in early October of 2012 when I literally drove our Jeep Wrangler right down into Lake Huron one morning……and hardly got our tires wet.  Photos below show the very different water level from then to now. 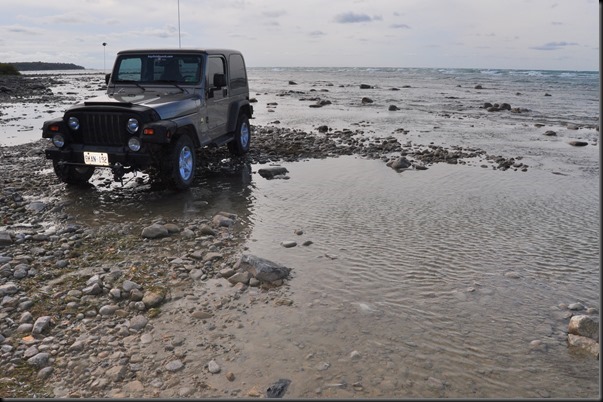 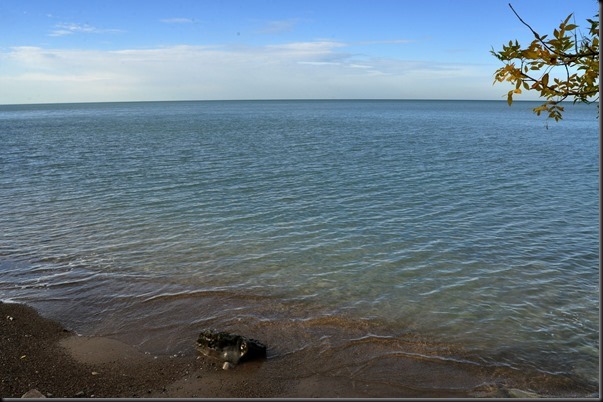 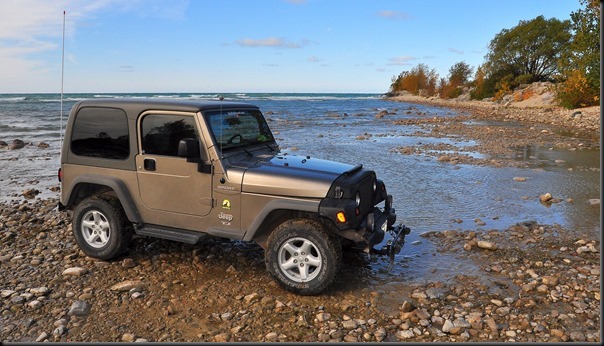 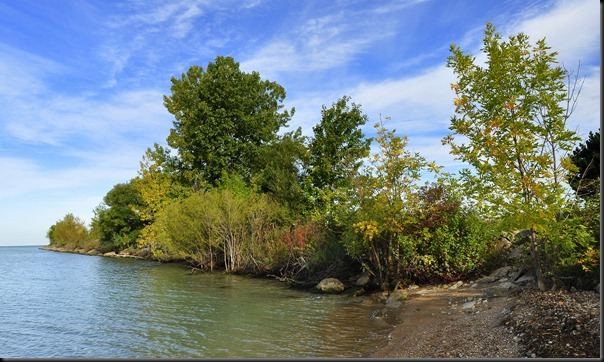 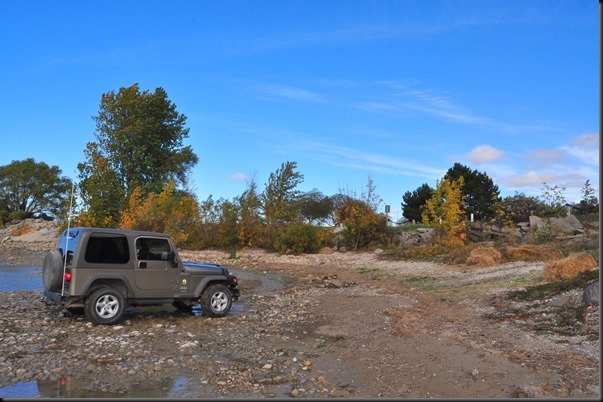 SHORT DRIVE DOWN EMBANKMENT IS TO THE RIGHT 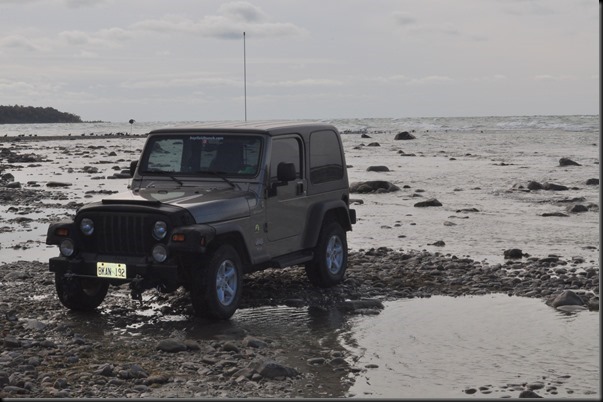 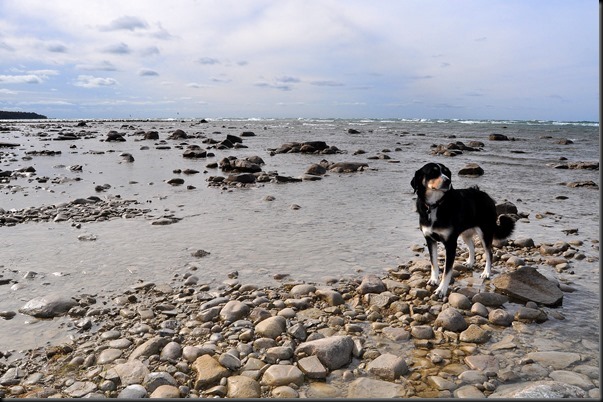 HMMMM COULD IT BE OVER THERE 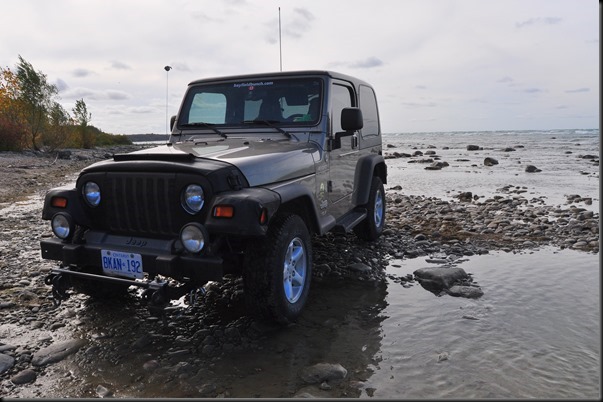 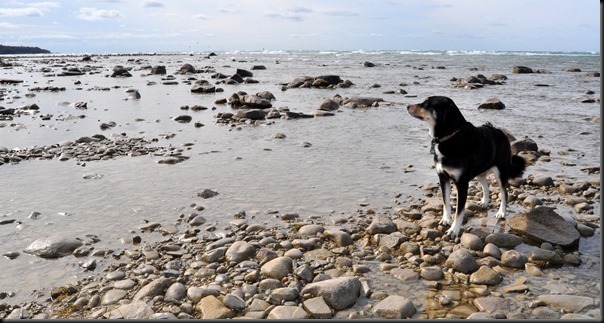 HURRY UP AN TAKE THE PHOTOS DAD BEFORE THE LAKE TIDE COMES IN…..OF COURSE WE ALL KNOW THERE IS NO TIDE ON THE GREAT LAKES BUT I DIDN’T TELL PHEEBS THAT 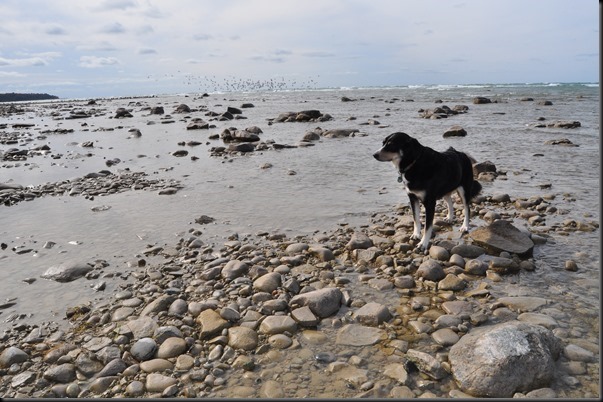 Ivan way up their in the wily woods of Alberta has finished his summer fire watch position and is once again footloose in his truck camper for the next few weeks on Canadian roadways as he and Hailey snow camp their way around a few of his favorite spots.  Like many of us Ivan is only weeks away from heading south for the winter in search of warmer weather in his truck and fifth wheel. 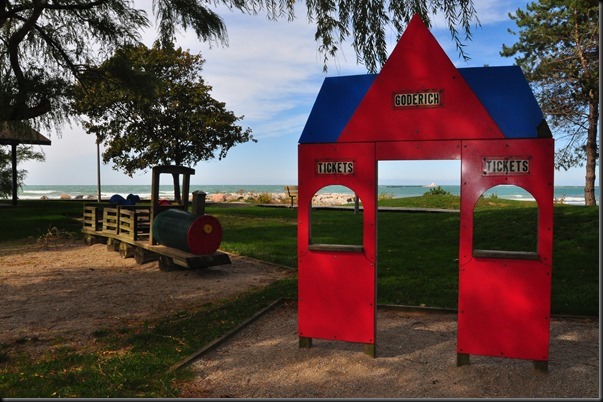 Jim over at Lifetime Sentences today has a rather humorous look at his current iPhone addiction.  Not often if ever any of us have come across the word Luddite but Jim did find just cause to use that very word in describing a friend of his regarding his iPhone. 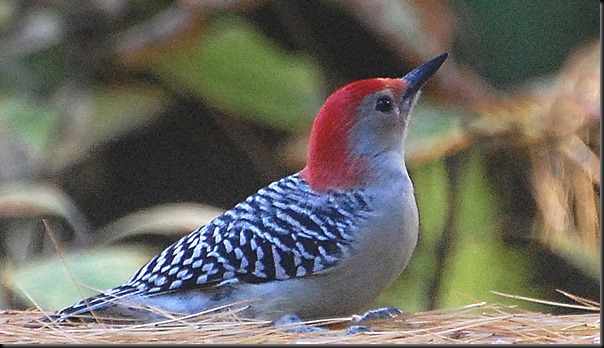 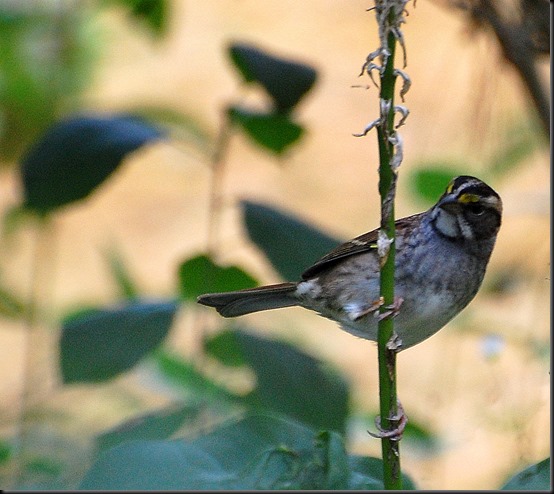 As the day wore on clouds thickened and temperatures dropped leaving me lazing around the house not doing too darn much of anything.  Richard had suggested a few alternate routes between Spencerport NY and Florida so it was out with my large Atlas again this afternoon to have myself a look at his suggestions.  Other than that it was a pretty quiet uneventful day. 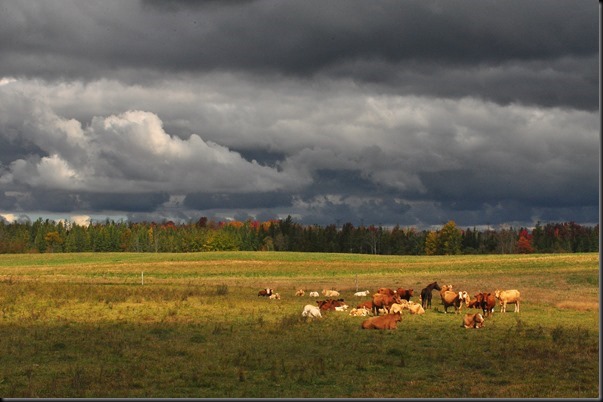 GROANER'S CORNER:((  A Few Laws Of The Universe::

- Law of Mechanical Repair: After your hands become coated with grease your nose will begin to itch or you'll have to pee.
- Law of the Workshop: Any tool, when dropped, will roll to the least accessible corner.
- Law of probability: The probability of being watched is directly proportional to the stupidity of your act.
- Law of the Telephone: When you dial a wrong number, you never get a busy signal.
- Law of the Alibi: If you tell the boss you were late for work because you had a flat tire, the very next morning you will have a flat tire.
- Variation Law: If you change lines (or traffic lanes), the one you were in will start to move faster than the one you are in now. (works every time)
- Bath Theorem: When the body is fully immersed in water, the telephone will ring.
- Law of Close Encounters: The probability of meeting someone you know increases when you are with someone you don't want to be seen with.
- Law of the Result: When you try to prove to someone that a machine won't work, it will.
- Law of Biomechanics: The severity of the itch is inversely proportional to the reach.
- Theatre Rule: At any event, the people whose seats are furthest from the aisle arrive last.
- Law of Coffee: As soon as you sit down to a cup of hot coffee, someone will ask you to do something which will last until the coffee is cold.
- Murphy's Law of Lockers: If there are only two people in a locker room, they will have adjacent lockers.
- Law of Dirty Rugs/Carpets: The chances of an open-faced jelly sandwich landing face down on a floor covering are directly correlated to the newness and cost of the carpet/rug.
- Law of Location: No matter where you go, there you are.
- Law of Logical Argument: Anything is possible if you don't know what you are talking about.
- Brown's Law: If the shoe fits, it's ugly.
- Oliver's Law: A closed mouth gathers no feet.
- Wilson's Law: As soon as you find a product that you really like, they will stop making it.