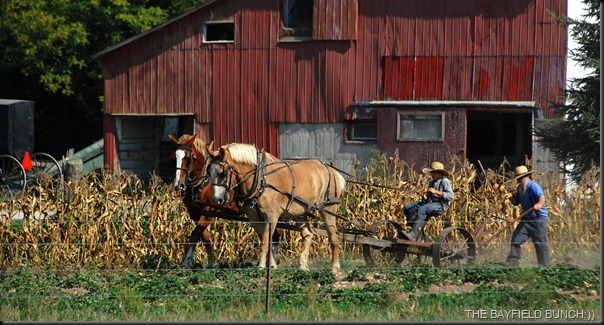 HAD TO USE A FEW OF MY FILE PHOTOS TONIGHT

Monday I had cleared out some scrub Mulberry trees at the west end of our unit to let in more sunlight for some young pine and cedar trees.   This morning Kelly wanted to have a look at the area and while standing there Pheebe suddenly came running frantically towards us.  I knew right away something was wrong and sure enough she had about a dozen bees all over her.  I quickly whisked off my jacket and began swiping bees off her.  Kelly began swatting them away from her fur as well and we made a move for the house but not before I was stung just behind my left armpit and a left hand finger.  The bees were mad and weren’t giving up but nor were we.  I plucked 2 bees out of Pheebs ears as we hastily made our way into the house.  Kelly quickly headed for the Motorhome to retrieve some Benadryl for Pheebs.  While in the Motorhome she was stung on the hip.  The bee must have been on her clothes or followed her in there.  So there we were this morning all a hurtin but you wouldn’t know if from Pheebs.  She never let out a yelp or a whimper through the whole ordeal.  I think both Kelly and I did though.  Pheebs, the whole time with tail wagging was more focused on going for a Jeep ride than bothersome bee stings. 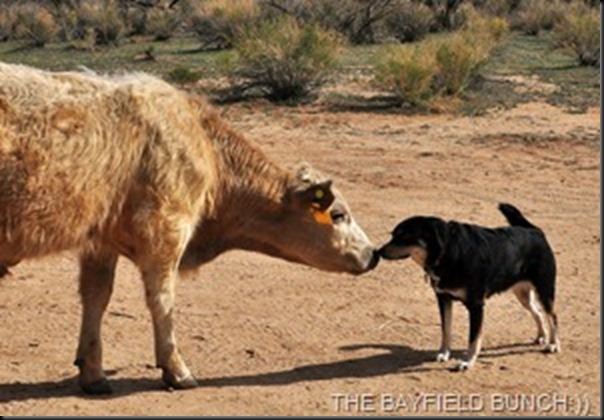 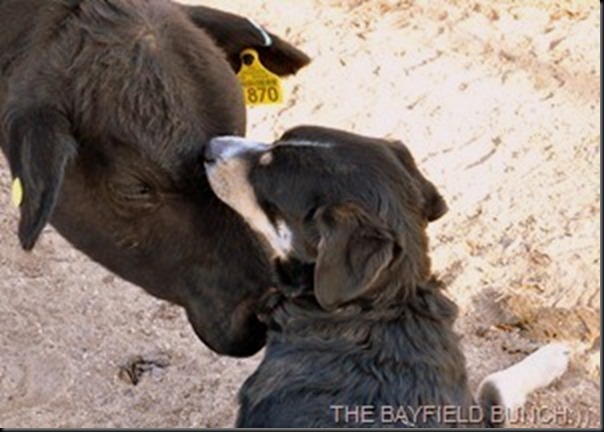 I had planned on taking Pheebs with me to the MTO (Ministry Of Transportation) driver’s license place in Goderich first thing this morning but after the bee sting incident I figured we had just better hang around the house for awhile to see if any of us would have any kind of allergic reaction to the bee stings especially Pheebe.

A MARSHMALLOW FARM NORTH OF CLINTON 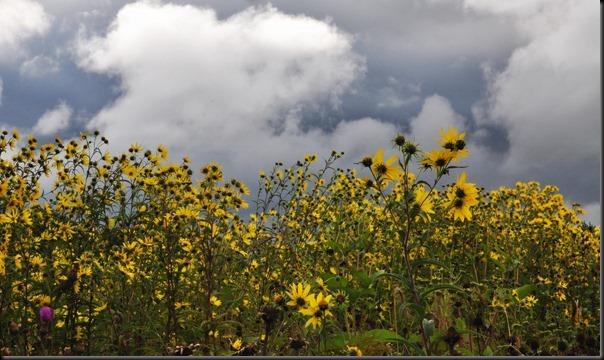 In the mail a month ago came the renewal forms for my driver’s license and a new health card.  No biggy of course until after looking at the MTO one Kelly informed me I was going to have to do a ‘written test’ this time.  Well that threw me into an immediate flap of course.  Me and tests of any kind have never been compatible, not even a little bit.  It’s one of the reasons I left high school back in the early 60’s.  My short term memory does not do well at retaining things and because of this tests have always been a very stressful thing for me.  So for a month now I’ve been putting this ‘driver’s license written test off.  Of course doing that just makes the whole situation much worse and gives the mind all that time to worry and fret itself to bits.  Decided late last week I had better step up to the plate and get this thing over with…..and today it was game on!! 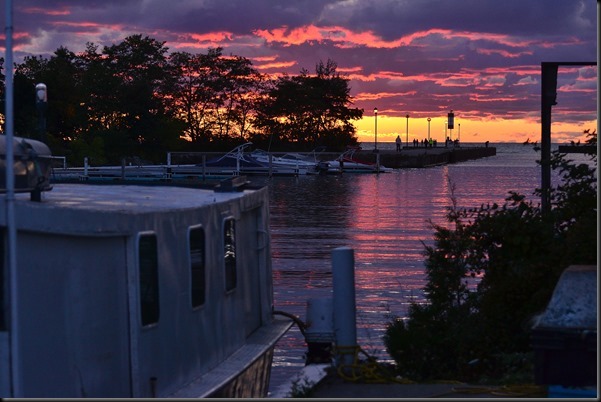 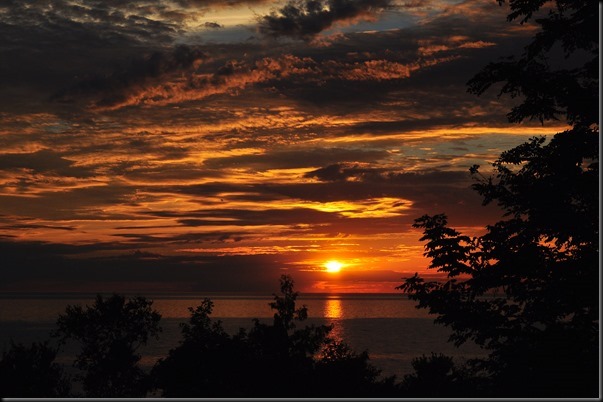 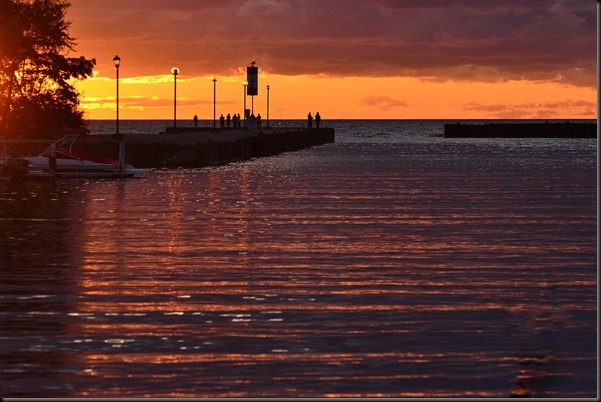 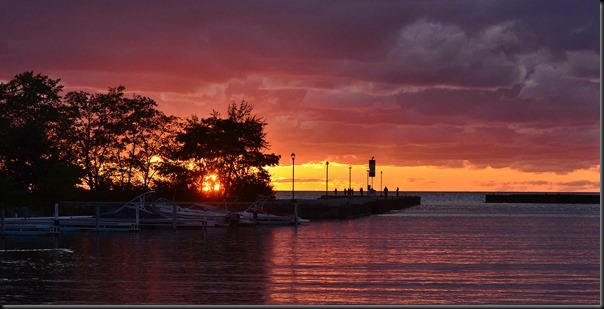 Off to Goderich I went and was able to get my new health card procedure completed alright but was told I would have to have my visual and written driver's license renewal done at the MTO in Clinton.  So off me, myself, and I went to Clinton about 13 miles Southeast of Goderich.  Driving along all by myself I sure was missing the Pheebs. 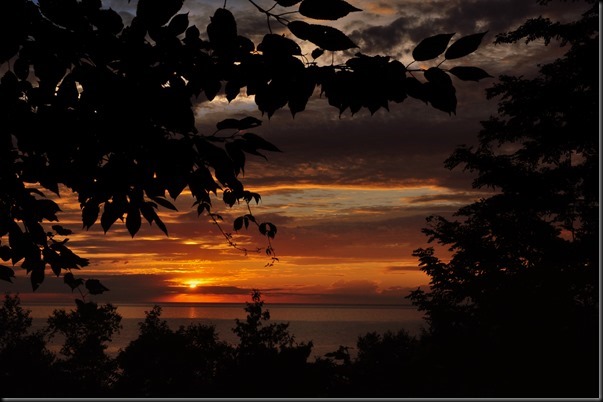 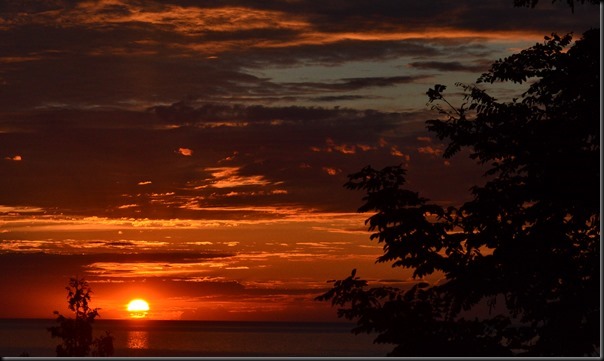 Amazingly enough I wasn't nervous about the test when I walked into Clinton’s MTO driver’s testing building but that soon changed.  Thinking I would have to do the vision test once I was surprised she made me do it 3 times.  That was unexpected and unsettling for me.  Next came the written test and here's where my nerves went into overdrive.  Tests are now done on computer screens and the test consisted of 20 questions.......or so I thought.  Luckily I had browsed through the driver's hand book previously and had made some notes which I read over first thing this morning.  The questions let you know right away if you have picked a wrong answer.  Luckily, and I do say luckily I knew most of them.  Applying some blind logic to three of the 20 questions I stumbled along getting the rest right except for two.  I was relieved to see the final question thinking the test was over but another screen popped up telling me to proceed to a second 20 questions and this is where the wheels really started coming off for me.  Right off the bat I got 2 out of 3 questions wrong and I began to see my driver's license slipping away.  Were my country drives with Pheebe over?  Had our winter RVing days suddenly come to an end?? 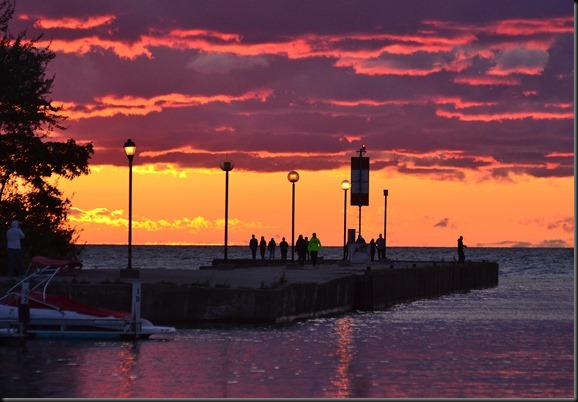 Questions were harder this time such as 'When does a driver not have to fill out a log book??  This question threw me and should have clued me in about something but in my feeling of 'impending doom' I shakily dragged myself on to the next question.  Something about making wide right turns while another question asked about pulsing brakes yet a gauge saying they were normal.  I still didn't clue in......have you? 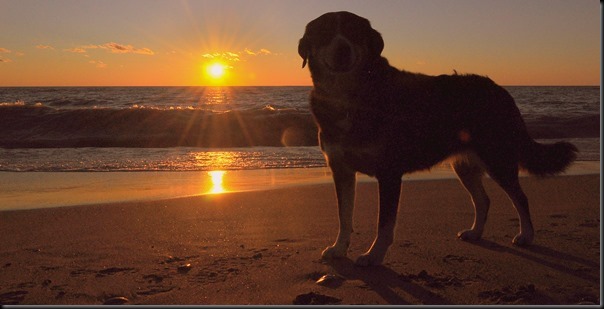 By the time I had reached the last question I thought to myself if I am at all lucky maybe I will have exited the Planet before I ever have to do a written drivers test again.  I had no idea if I had passed the test or not as I dejectedly made my way back to the counter.  The lady there had told me before the test I was allowed 4 wrong answers and I was sure I had more wrong than that which in fact I did.  But here's what she told me I didn't know, I was allowed 4 wrong in the first 20 questions and four wrong in the second 20 questions.  Holy Smokes that meant maybe I had just unwittingly passed my written drivers test afterall but I was afraid to ask.  She didn’t say anything as I watched her do some official stuff with a few yellow papers.  She had me sign something then handed me back my driver’s license with a temporary new one.  Double Holy Smokes.  Turns out I had two wrong in the first 20 and 4 wrong in the second 20 and it was still A-OK.  But I was still confused and hadn't clued in on what had just happened.  And I wasn't about to find out until I got home and Kelly figured out why I ended up having to do the second 20 questions.  When I walked out the door of that testing facility today I had no feelings of elation about passing the test.  My nerves were so frazzled I felt a little weak kneed and a touch sick to my stomach because I had been almost certain I had failed the test. 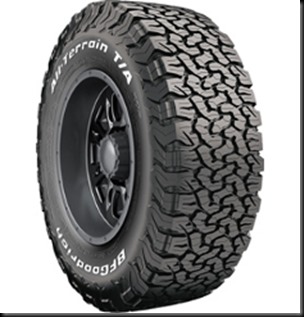 <<< THIS IS THE BF GOODRICH TIRE I LOOKED AT TODAY

From the driver's test facility I drove over to Clinton's Huron TIRECRAFT Auto Center to get a price on 4 new tires for our Jeep Liberty.  The tires we have on it now are reasonably Okay highway tires but some may remember me saying this past winter about wanting better heavier duty all-terrain tires for the off-road desert/mountain driving we do in the South-West.  Wanted tires with stronger sidewalls and a deeper tread design than normal.  After our I-40 'blow-out' on the Jeep being towed behind the Motorhome late last March west of Albuquerque New Mexico I wanted new tires and that was that!!   When I explained to the fella what kind of off-road terrain we often find ourselves on such as sand and jagged rocks at times he recommended a tough BF Goodrich All Terrain Tire and showed me one on the rack.   I liked the look and feel of the tire so figure that's what we will have put on the Liberty in about 3 weeks.  I remember my step-father saying, ‘good tires on a vehicle is the cheapest insurance you can buy’. 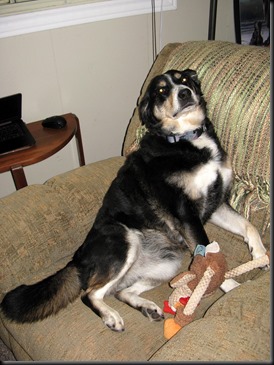 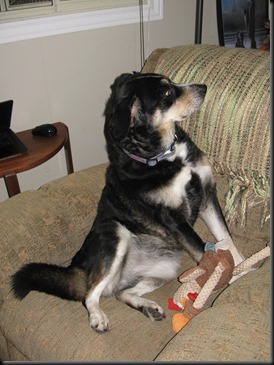 HAHA I’M IN MOM’S CHAIR…..’OH NO’ IS THAT MOM COMING DOWN THE HALL

Finally back home around 1 o'clock I loaded up a big utility trailer load of small trees and limbs from Monday’s tree trimming and headed for our recycle area.  Pheebs was only too happy to come along and help.  She always says, “Yabba-dabba-do any excuse for a ride in the Jeep will do”:))  Surprisingly she was not any worse for wear after this mornings bee stings and in fact none of us had any side effects at all.  Bonus:)) 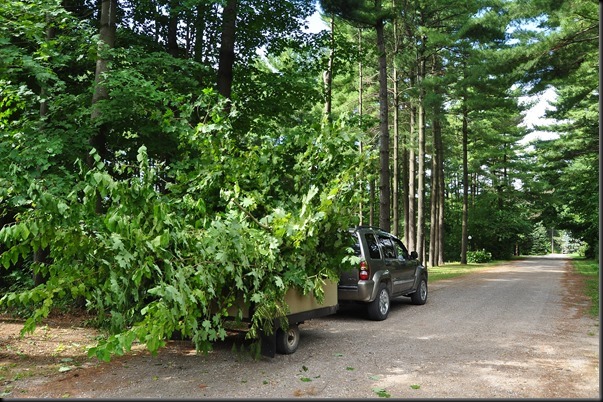 LOADED UP AND READY TO GO 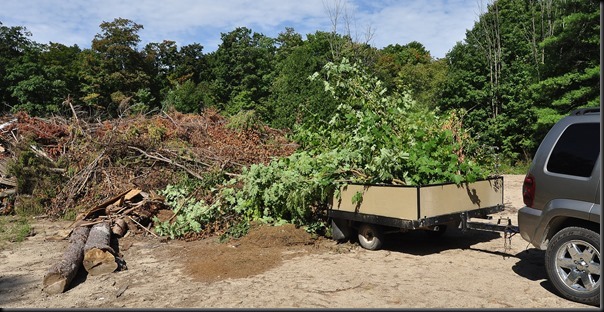 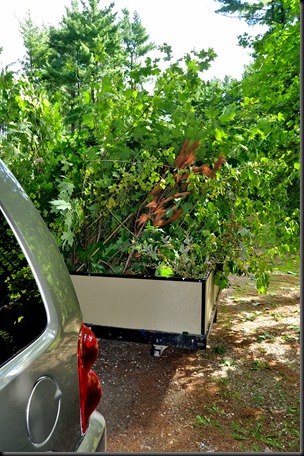 Monday morning Pheebs and I were in Grand Bend Ontario which is a short drive south of Bayfield.  Did you know a past prominent American politician at one time had a cottage and spent time there during summer months.  This fellow and his family once drove all the way from Boston Massachusetts  to Grand Bend with his dog in a pet carrier atop his car.  You may be surprised to know who this politician was.  Jim over at Lifetime Sentences has the answer for you:)) 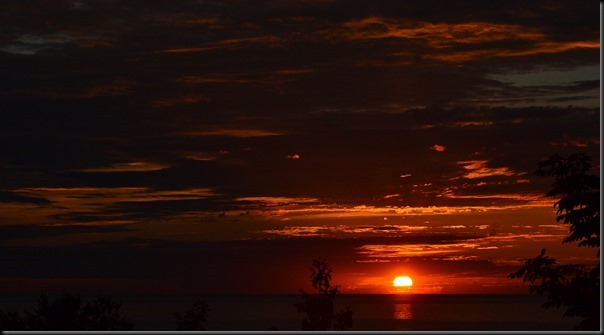 Oh, and to clear up the confusion about that written test this morning.........Many years ago I had upgraded my general class license which was a 'G' to a 'D' which enabled me to drive larger stake trucks etc.  What both Kelly and I had failed to think about was that my written test this morning would not be for a 'G' class license but a 'D' class license and that explained the second 20 questions dealing with some truck related things.  Questions I had not read up on so it was a bit of a fluke that I actually passed an upgraded class D license.  I don't give myself any credit of course and figure it was probably due to that jolt of Bee venom in my system this morning that obviously triggered a big burst of smarts in my brain and an even bigger burst of just plain old simple luck.  Yep, that's what I figure alright:))  By the way I spent the bulk of my afternoon stretched out in my recliner contentedly de-stressing and knowing that next time I will drop my D license rating for a simpler and easier G license test and that may not be for another 5 or 10 years.  Whaddya think my chances are of ever having to do another stressful written test eh……….:)) 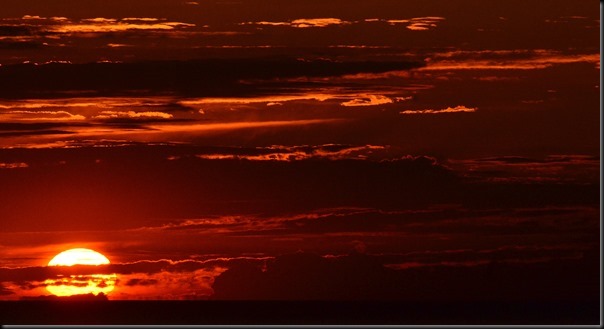 "Do you believe in life after death?" the boss asked one of his employees."Yes, sir," the clerk replied.  "That's good," the boss said. "After you left early yesterday to go to your grandmother's funeral, she stopped in to see you."

- Those who live by the sword get shot by those who don't.
- I feel like I'm diagonally parked in a parallel universe.
He's not dead, he's electroencephalographically challenged.
- She's always late. Her ancestors arrived on the Juneflower.
- You have the right to remain silent....Anything you say will be misquoted, then used against you.
- I wonder how much deeper the ocean would be without sponges.
- Honk if you love peace and quiet.
- Nothing is fool-proof to a sufficiently talented fool.
- A day without sunshine is like, you know, night.
- Atheism is a non-prophet organization.