With a couple sets of company coming in the next week I was hoping to have a bunch of loose end gardening projects tidied up.  I was out early this morning but again underestimated the humidity and with-in half an hour of moving some rocks around I was done.  Back into the house with a clean shirt I had just put on less than an hour before going right into the laundry basket and Al going straight away into the shower. 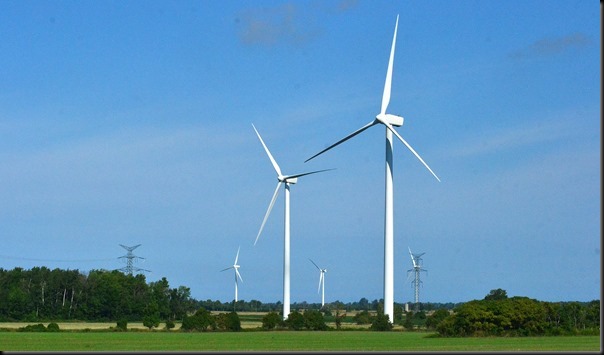 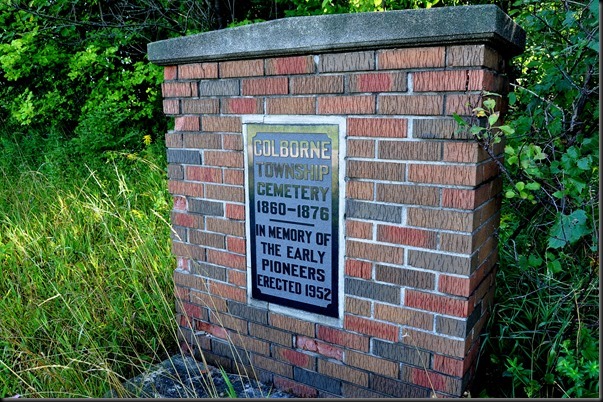 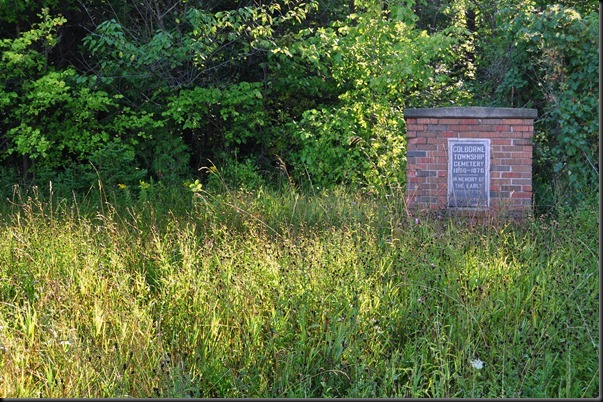 Again not wanting to start my day off just sitting around in the house Pheebs and I took off out into the countryside in search of a few Saturday night photos. 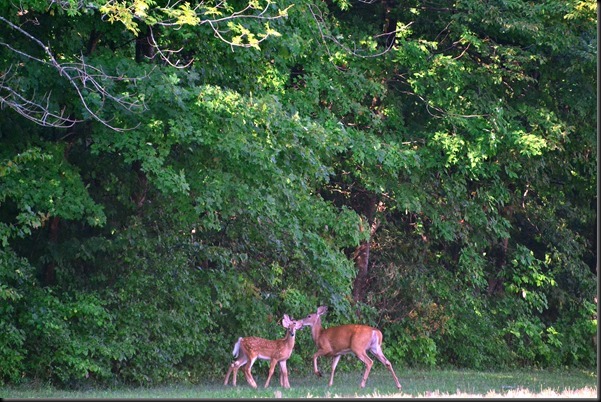 Not especially wanting to do a short drive and be home in an hour or so to just sit around I asked Pheebs if she had any ideas as to where we could go.  Said she hadn't seen her Alpaca pals for awhile so with a McDonald's burrito, carrot muffin and coffee in hand we headed north out of Goderich in the direction of Dungannon Ontario. 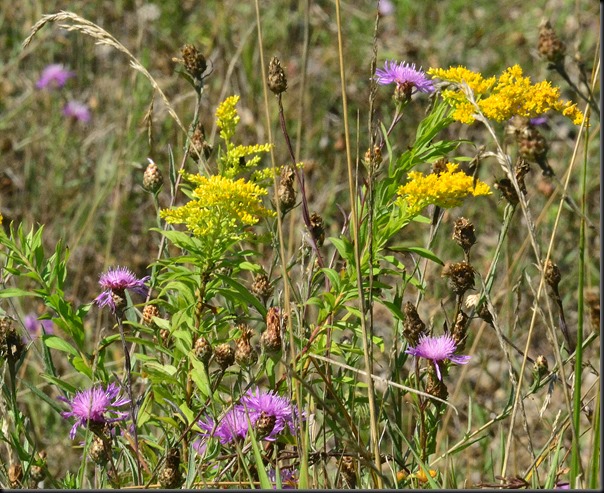 We rolled through Huron Counties countryside with all windows down and how nice to be serenaded along the way by hosts of Crickets along roadside ditches and fields.  Reaching the rural intersection of Mill Line and Hawkins Road we pulled up alongside the Alpaca corral and within seconds of knowing Pheebs was there the gang came wandering out of the barn to see her.  Sniffs all way round and we were soon on our way again. 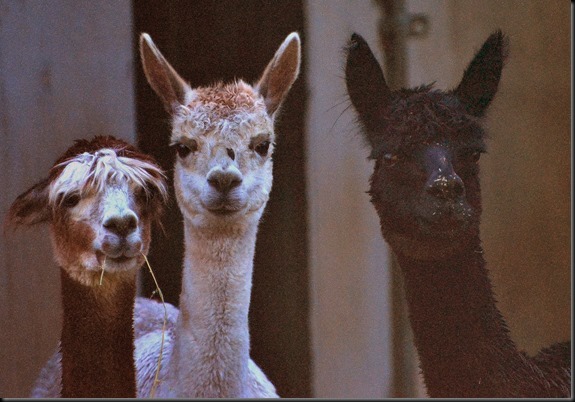 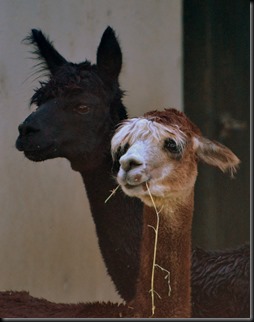 THAT ZEKE IS A REAL HAM 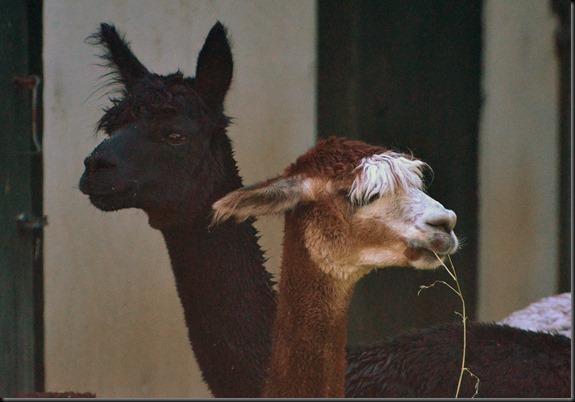 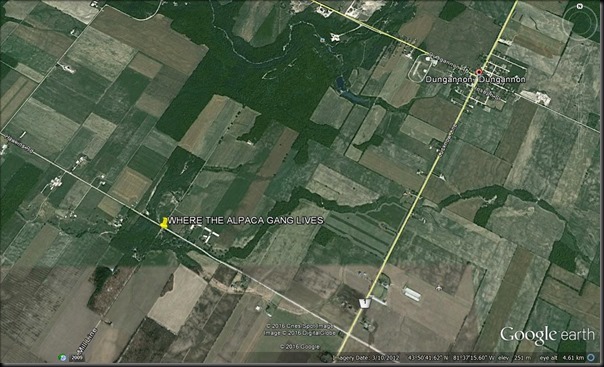 Figured since we had come as far as Dungannon we  might as well head Northeast a few more miles and take us for a drive through Amish/Mennonite country.  Must have had some substantial rains overnight because roads in places were downright muddy and I could see where narrow buggy wheels and horses hooves had dug in and rutted the gravel.  All fields were green and I realized I had totally missed the wheat harvest by a week or two. 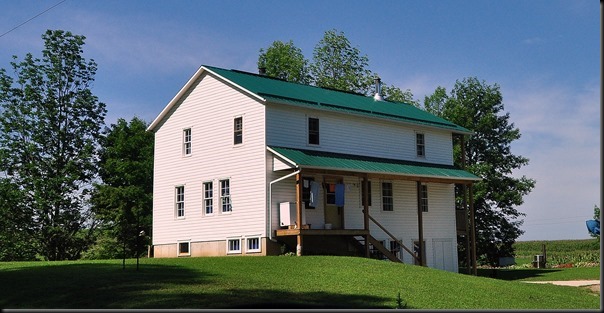 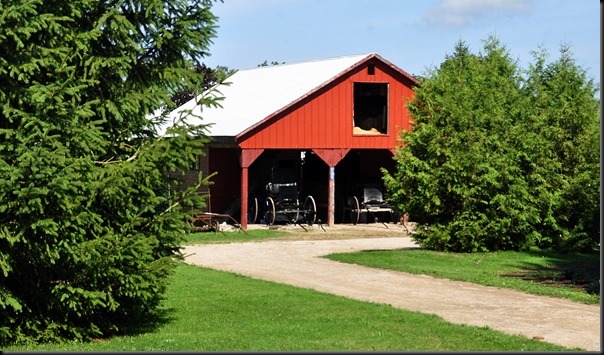 IN THE TINY HAMLET OF ST HELENS ONTARIO 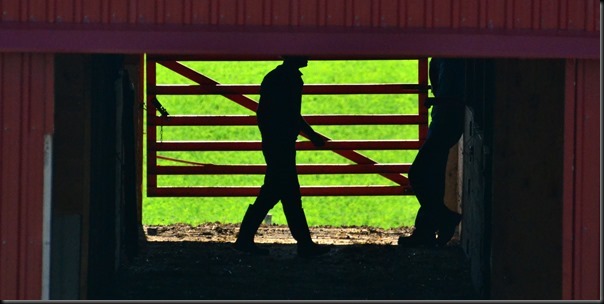 WISHED I COULD HAVE GOT A LOWER ANGLE ON THIS PHOTO….NOTICE A SECOND GUY ON THE RIGHT WHICH I DIDN’T SEE UNTIL I LATER EDITED THE PICTURE 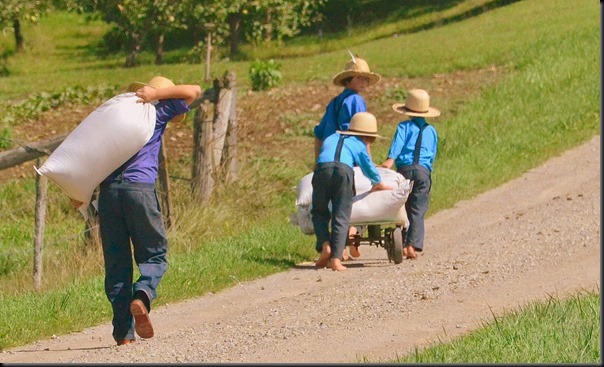 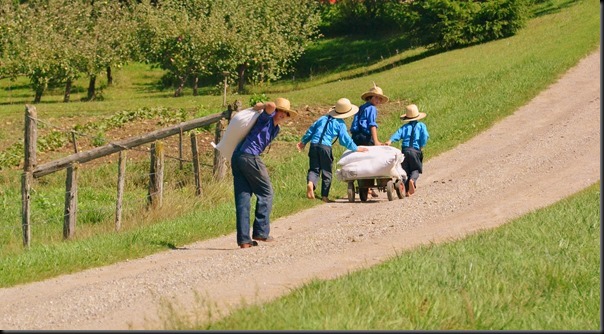 A drive through Amish country over that way is not complete without a stop at Lake Wawanosh and how nice to find nobody there when we rolled in around 11 a.m.  Lake level was down a bit but not bad.  Pheebs even puddled around at the water's edge getting her paws wet. 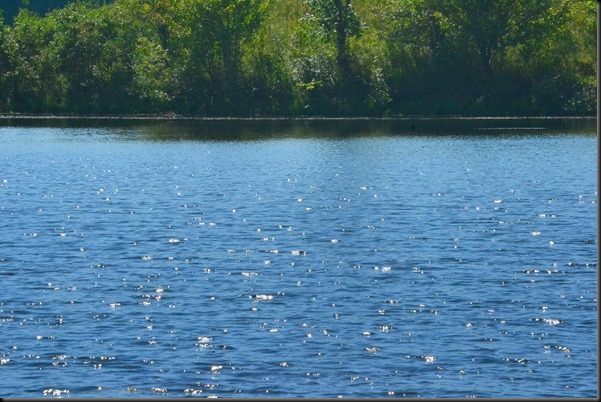 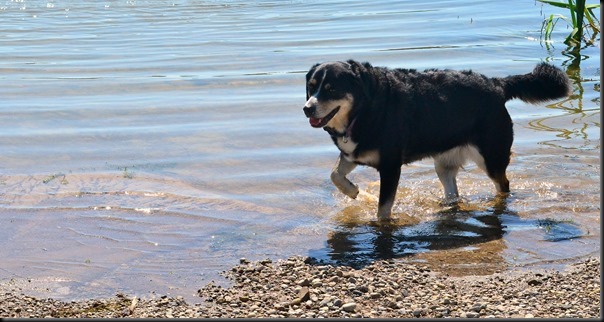 EVEN PHEEBS GOT HER PAWS INTO THE COOL WATER

From Lake Wawanosh we made the turn for home buttoning up the windows and hitting the snow flurries button to cool ourselves down.  It was shortly past noon when we rolled into the driveway and quickly retreated inside the comfortable cool house.

A COOL SHADY SPOT ON A HOT SUMMER DAY

EITHER THIS IS A VERY LONG NECKED SHEEP OR THOSE ARE VERY SHORT NECKED ALPACAS:)) 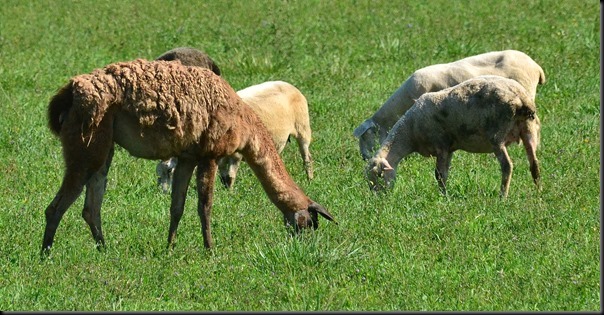 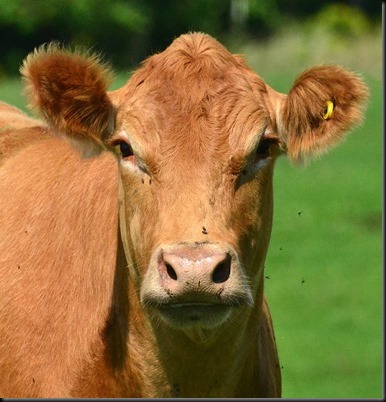 AND THEIR COWS LOOK PRETTY DARN GOOD TOO

SOMETHING A LITTLE DIFFERENT HERE

EVEN CAME ACROSS ONE OF THOSE RARE AMISH TURBO HORSES….YOU KNOW THE KIND WITH 8 LEGS FOR MAXIMUM HORSE POWER TOWING 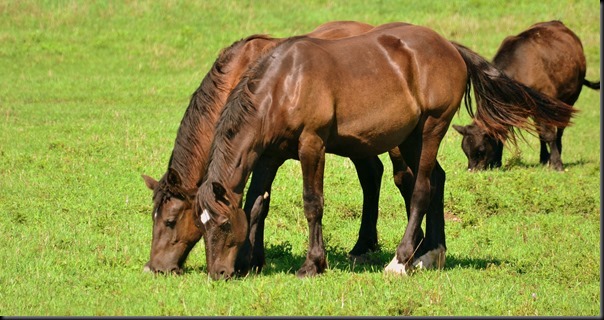 OOOPS GUESS I HAD THAT WRONG…..IT’S ONE OF THEIR NEWER MODELS, A TWO HEADED 6 LEG VERSION BUILT FOR GOOD ‘HORSE SMARTS’ FIGURING ‘TWO HEADS ARE BETTER THAN ONE

I am heartened to see much cooler temperatures slated for Sunday with overnight Monday temps due to maybe drop down into the high 50's.  Long range forecast is for a consecutive stretch of more civilized temperature and that for sure is going to make a whole lot of folks very, very happy and especially ME:)) 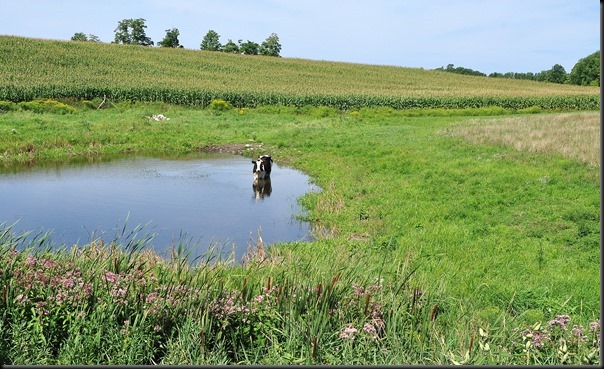 SPOTTED THIS AMISH HOLSTEIN COW COOLING OFF IN A POND 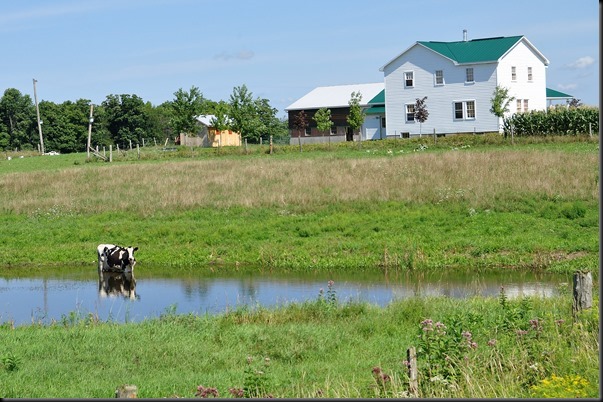 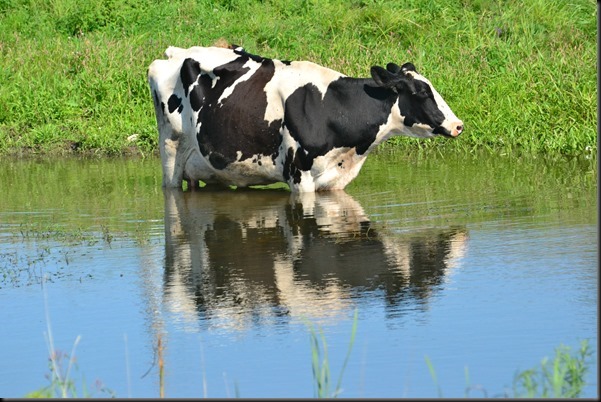 COOLING OFF THE UNDERCARRIAGE

My goal for tomorrow is to try hard at making it through one single day without complaining about the weather.  Say, was that a big cheer I just heard go up out there……………….:))

A LITTLE AMISH GIRL MAKES HER WAY FROM THE BARN TO THE HOUSE….I DIDN’T STOP TO TAKE THIS PHOTO INSTEAD TAKING IT OUT THE PASSENGER SIDE WINDOW ON THE WAY BY

A grandmother was surprised by her seven-year-old helper early one morning. He had made her coffee! She drank what was probably the worst cup of coffee in her entire life. And when she got to the bottom, to her utter amazement, there were three little green, army men in her cup.  Puzzled, she asked, "Honey, what are these army men doing in my coffee?"  Her grandson answered, "Grandma, you know how it says on TV, 'The best part of waking up is soldiers in your cup.'"

Did you hear about the Hindu yogi who was having a filling put in a tooth? When the dentist asked him if he wanted novocaine, the yogi said, "No. I can transcend dental medication."