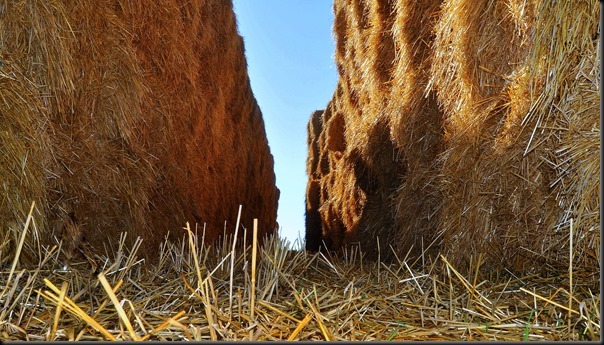 HIKING THROUGH ONE OF HURON COUNTIES EARLY AUGUST STRAW CANYONS

We have lots of Chicory growing along our roadsides so with that in mind Pheebs and I headed off this morning to see if we could dig us up a couple small plants for our flower garden.  First 2 clumps I tried I couldn’t even get the shovel into the hard concrete like soil.  Spotted a third clump growing back from the road alongside a cornfield so figured the ground might be a bit softer and it was….but only barely.  Got a few roots so I’ll plant it and see if it comes up next summer.

ON OUR MORNING JEEP RIDE WE FOUND OURSELVES A STRAW CANYON

REMINDS ME OF SOME OF THE SLOT CANYONS WE HAVE HIKED IN UTAH, ARIZONA AND CALIFORNIA 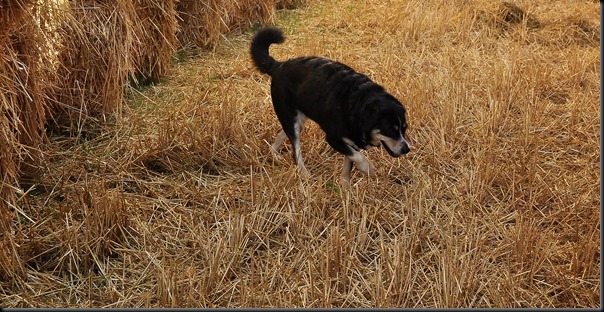 ARE WE GONNA EVER FIND OUR WAY OUT OF HERE DAD 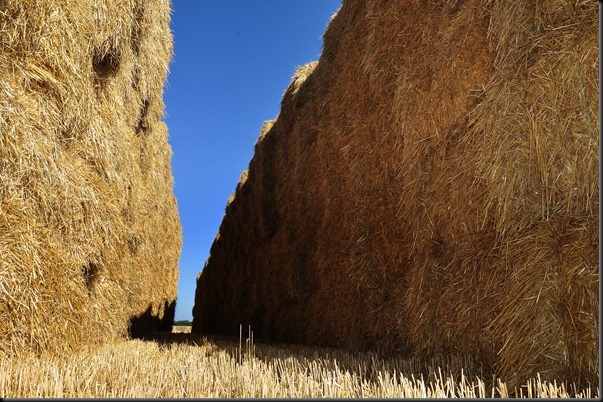 I THINK I SEE A WAY OUT PHEEBS 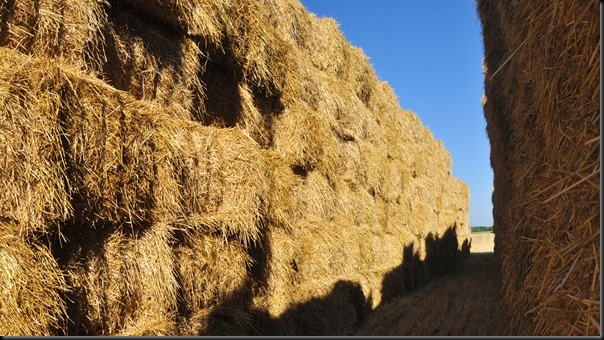 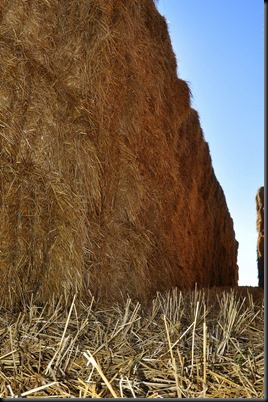 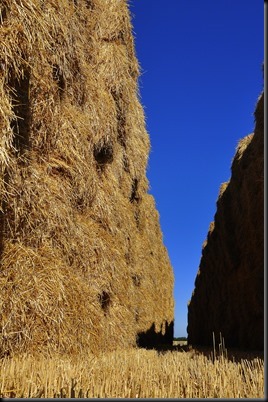 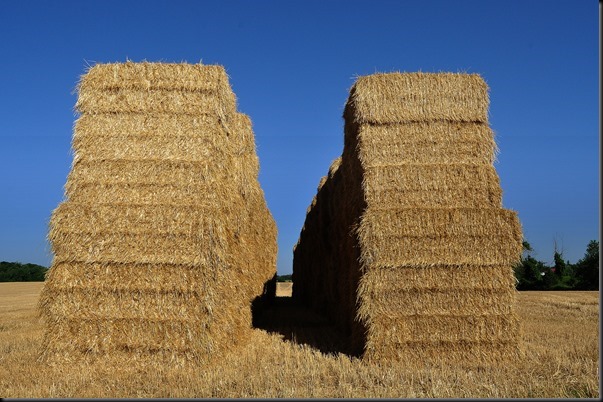 WHEWWWW, THAT WAS QUITE A HIKE 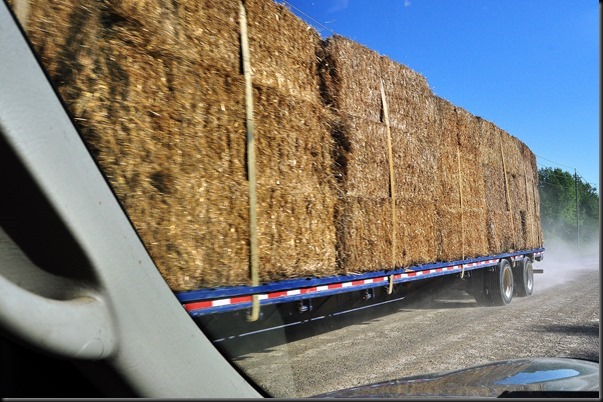 AND HEY THERE GO SOME OF THOSE CANYON WALLS NOW

Dropped around a couple garden centers this morning looking for Hollyhocks but nobody had any.  One garden lady said Hollyhocks are old fashioned now and not as popular.  I thought ‘WHAT’!!  Hollyhocks have a beautiful flower and since when did a flower go out of fashion.  I walked away more determined than ever to find me some Hollyhocks just for old time’s sake.  Out of fashion indeed!!  What is this world coming to anyway. 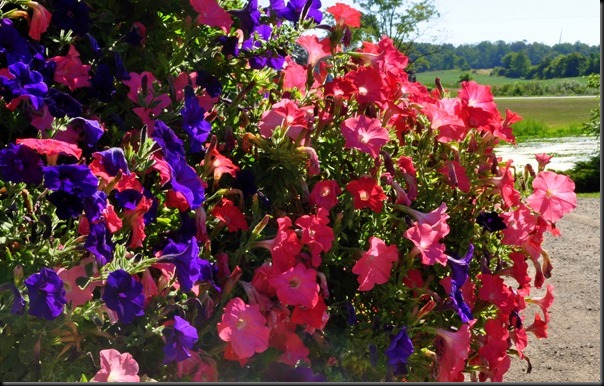 THIS IS AT A GARDEN CENTER AND NOT AT OUR PLACE 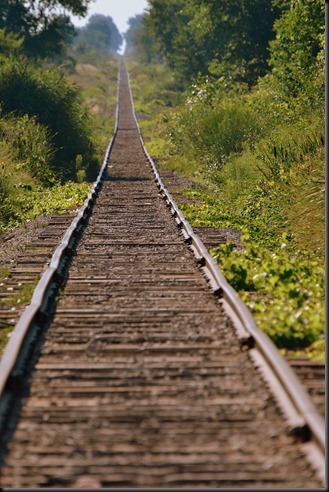 By the time Pheebs and I arrived home about 10:30 it was already too hot for me as I cursed this miserable heat wave again.  Did manage to trim some very low hanging branches on neighbor Monica’s Magnolia tree and was very surprised to see a few Magnolia flowers blooming.  Think I’m going to have to work the cooler ‘night shift’ if I’m ever going to make any headway on our front yard project.  When I start something I generally like to finish it so I’m having quite a time with myself over how slowly I have to do things in this heat.  If I just walked outside and sat quietly under a shady tree with a slight breeze blowing I would probably be just fine but I don’t have the patience needed to sit long enough doing nothing. 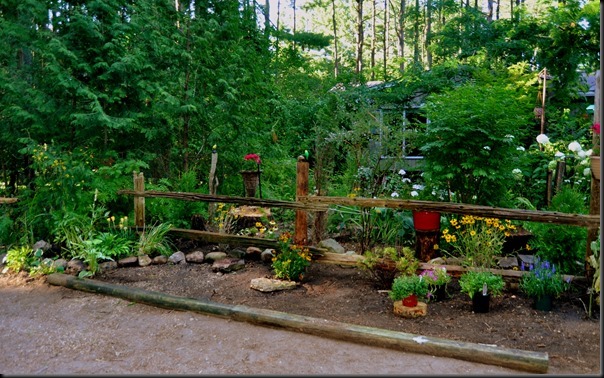 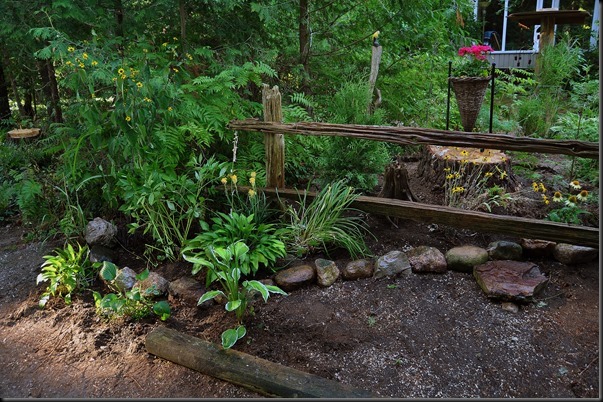 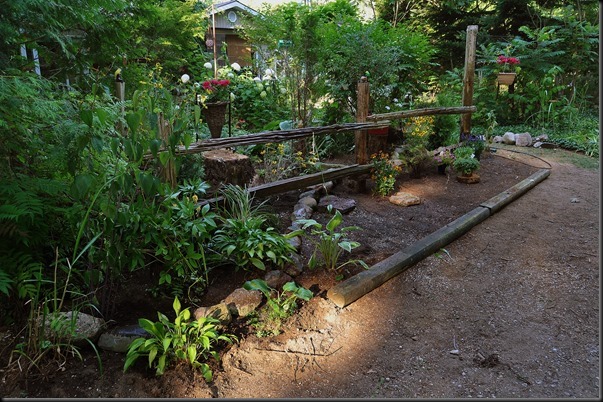 A few posts ago I wrote about Kelly making some absolutely yummy Maple Pecan Danish pastry.  We have had a few inquiries about the recipe so here it is…….. Maple Pecan Danish.  Careful now, one bite of this and you will be compelled to eat the whole darn thing.  Ever eat just one Oreo cookie!!  I rest my case:)) 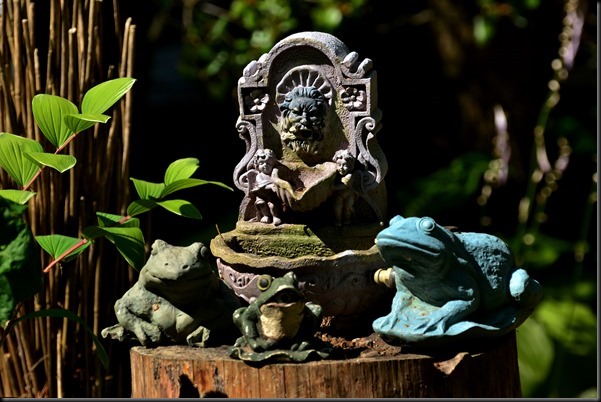 A FEW FROGS KEEPING WATCH OVER OUR POND

Despite our hot weather I sure am enjoying myself working away on our front yard project.  I had kind of lost interest in our grounds a number of years ago after landscaping our featureless yard beginning back in the Fall of 2002.  How nice to have the creative gardening juices flowing again as I scrounge around the property for materials such as rocks, plants, pieces of decorative wood and just about anything else I can find to fit in in some sort of reasonably natural way.  The added bonus is exercise of course and I sure have been dealing with some aching seldom used muscle groups at the end of some of these days.  Good feeling though to have a creative gardening project underway again to stimulate my aging mind………………………:)) 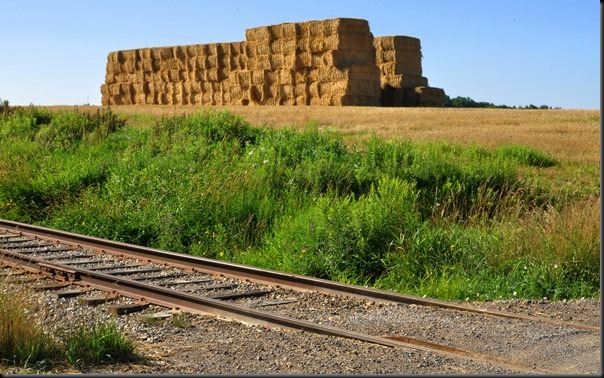 GROANER’S CORNER:(( Two elderly ladies had been friends for many decades. Over the years they had shared all kinds of activities and adventures. Lately, their activities had been limited to meeting a few times a week to play cards.  One day they were playing cards when one looked at the other and said, "Now don't get mad at me... I know we've been friends for a long time... but I just can't think of your name! I've thought and thought, but I can't remember it. Please tell me what your name is."
Her friend glared at her. For at least three minutes she just stared and glared at her. Finally she said, "How soon do you need to know"?

A lady is throwing a party for her granddaughter, and had gone all out..... a caterer, band, and a hired clown. Just before the party started, two bums showed up looking for a handout. Feeling sorry for the bums, the woman told them that she would give them a meal if they will help chop some wood for her out back. Gratefully, they headed to the rear of the house. The guests arrived, and all was going well with the children having a wonderful time. But the clown hadn't shown up. After a half and hour, the clown finally called to report that he was stuck in traffic, and would probably not make the party at all. The woman was very disappointed and unsuccessfully tried to entertain the children herself. She happened to look out the window and saw one of the bums doing cartwheels across the lawn. She watched in awe as he swung from tree branches, did mid-air flips, made amazing faces and leaped high in the air.
She spoke to the other bum and said, "What your friend is doing is absolutely marvelous. I have never seen such a thing. Do you think your friend would consider repeating this performance for the children at the party? I would pay him $50!"  The other bum says, "Well, I dunno. Let me ask him. 'HEY WILLIE! FOR $50 WOULD YOU CHOP OFF ANOTHER TOE?"

A woman has twins, and gives them up for adoption. One of them goes to a family in Egypt, and is named "Amal." The other goes to a family in Spain; they name him "Juan."  Years later, Juan sends a picture of himself to his mom. Upon receiving the picture, she tells her husband that she wishes she also had a picture of Amal. Her husband responds, "But they are twins--if you've seen Juan, you've seen Amal."