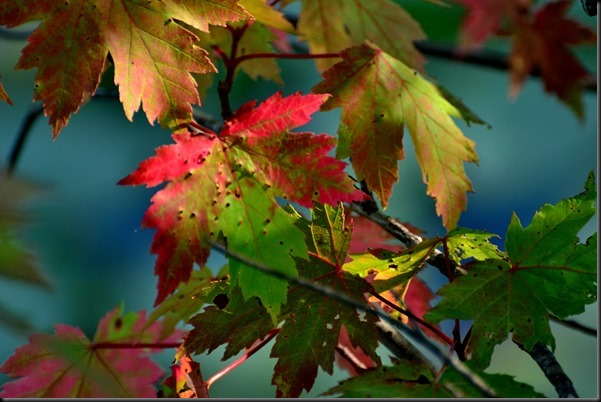 YOU DON’T SUPPOSE I’M RUSHING AUTUMN A WEE BIT DO YOU:))

Ever make up your own words while listening to music.  Like different words to familiar old songs.  Happens to me a lot and I've been doing it for years.  Not having the best vocabulary I don't try to improve on a songwriter's words but I will often hear words in a song that I switch out for similar sounding words.  I was reminded of this earlier today while listening to Frank Sinatra singing, 'Love Is Here To Stay'.  Now my words have nothing to do with the context of the song whatsoever and when Frank sings, "In time the Rockies may crumble Gibraltar may tumble" I always substitute the words, ,Billy Bop McGumble And Charlie O McStumble'.  I know it don't make no good darn sense but it's just the way my mind often plays with words in a humorous way. 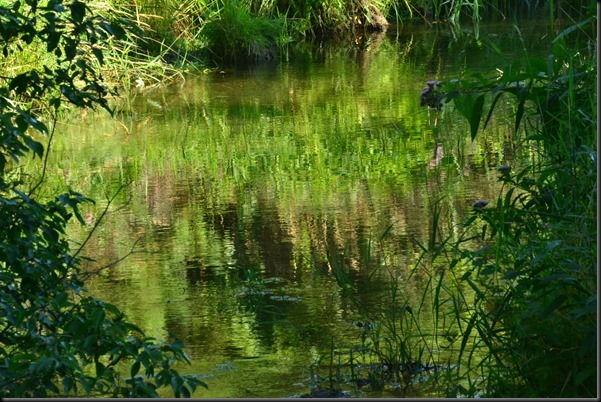 REFLECTIONS IN A COUNTRY STREAM 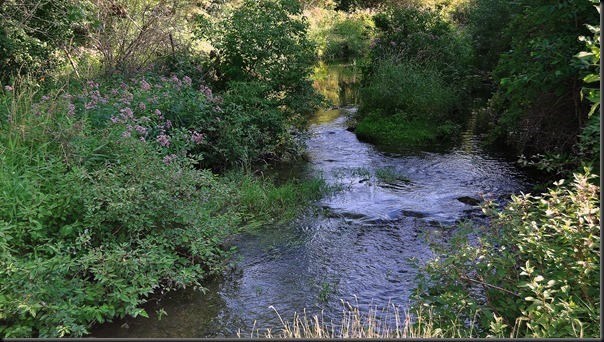 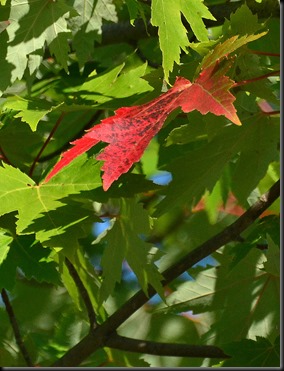 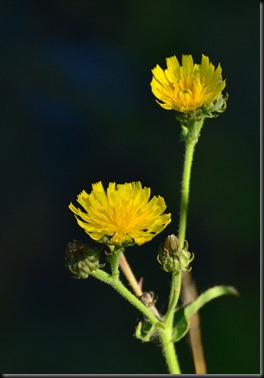 Needing a couple more bags of Cedar Mulch Pheebs and I had an actual destination for our meanderings this morning.  Under a clear blue sunny sky with wondrous cool temperatures we first headed north to Goderich.  A quick swing through McDonald's for a Seniors coffee and carrot muffin and minutes later we were down on the south side of the harbor.  Two big Lake Freighters loading in two separate locations.  One for salt and one for grains with the Manitoulin loading salt and the Michipicoten probably loading grains and in particular maybe recently harvested local wheat.

THE MANITOULIN AT THE SIFTO SALT MINE DOCK 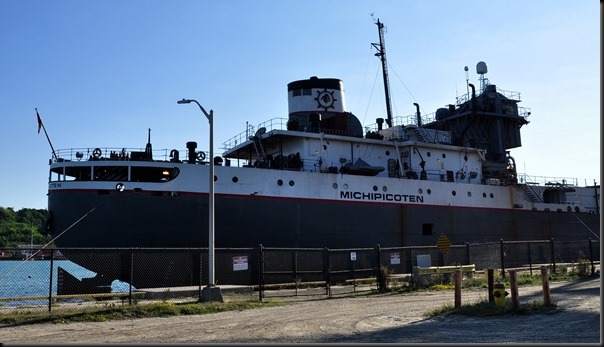 AFT SECTION OF THE MICHIPICOTEN 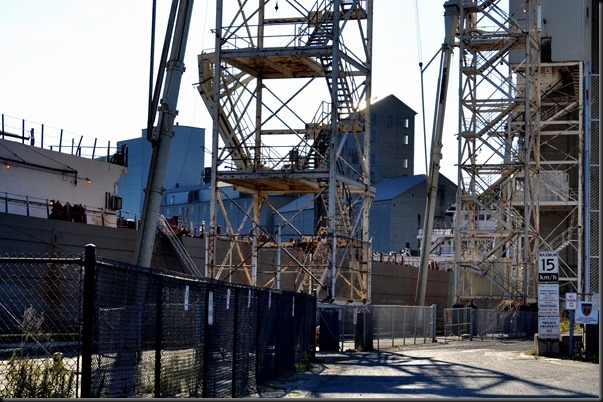 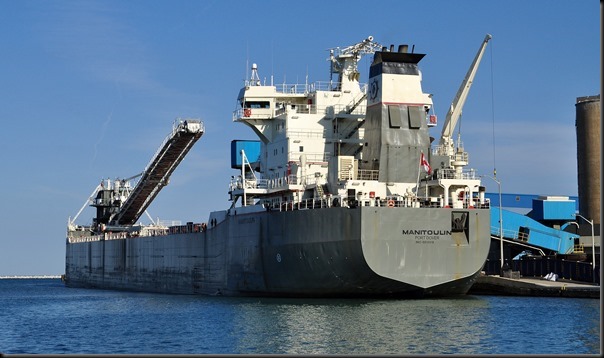 Headed north out of Goderich about a mile then swung Libby's nose to the east in the direction of Ben Miller.  A few photos along the way as we made our way towards Londesborough where we pulled into the Gray Haven Garden center again.  Loaded up 3 bags of mulch and headed for home.  The morning was rapidly heating up and I wanted to get back before the tires melted off the Jeep.  And that was about it for my day again.  Too yukky icky sticky to be attempting anything outside.   Weather people are now saying this miserable hot steamy weather is going to last on into September.  What a downer!!  It is so dry here even the dust is spittin dust. 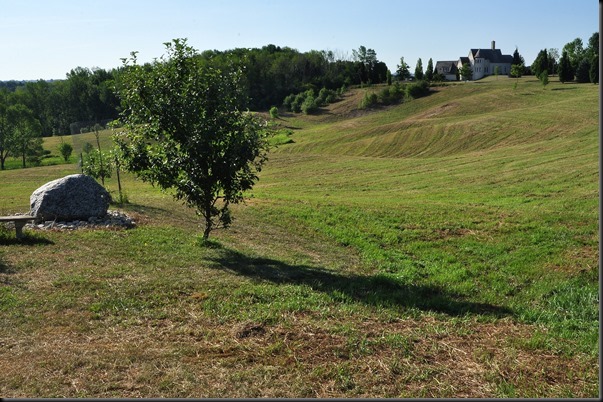 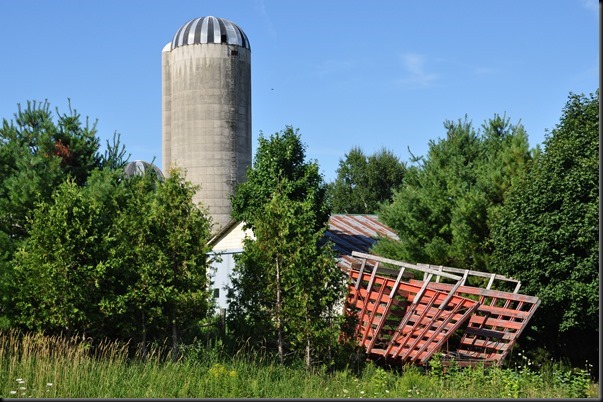 I THINK THIS OLD HAY WAGON HAS SEEN BETTER DAYS 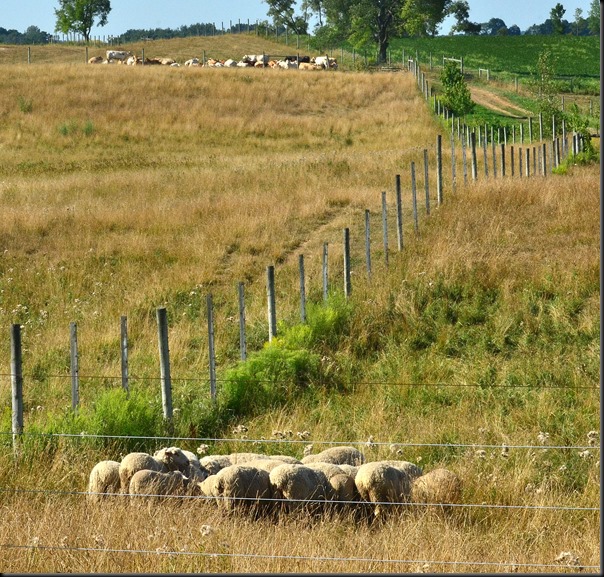 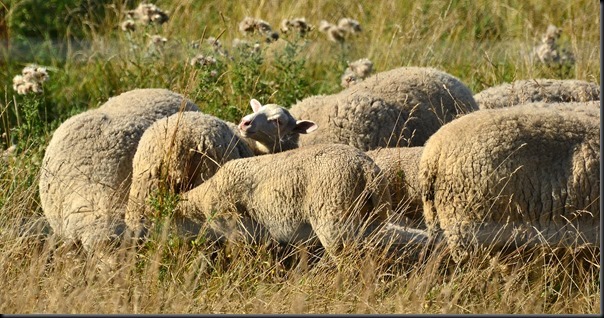 ‘HEY WATCH WHERE YA STICK THAT NOSE EH’ 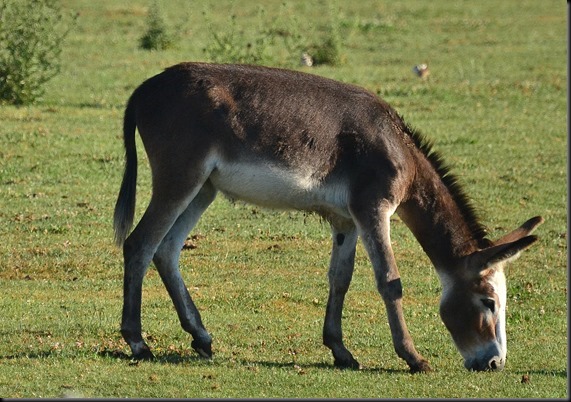 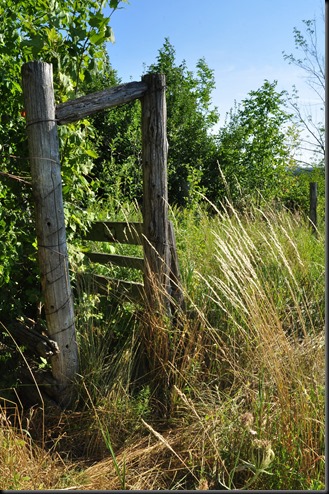 Noticed a spike in my daily stat numbers this morning and I have to thank Jim over at Lifetime Sentences and the Furry Gnome at Seasons in the Valley for mentioning the Bayfield Bunch in their posts yesterday.  Thanks guys much appreciated and that tells me both your blogs are gaining readership and doing great.  Good stuff and keep up the good work:)) 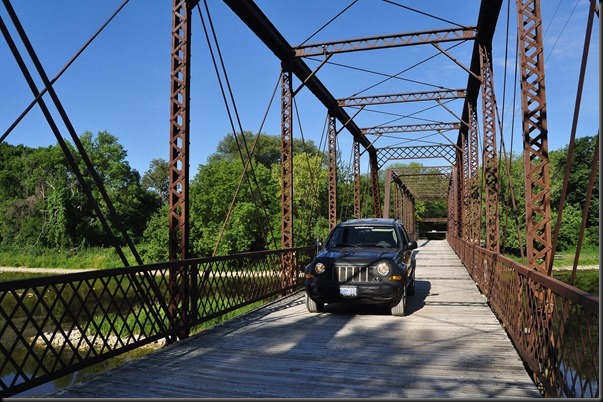 NORTH OF CLINTON THIS IS KNOWN AS ‘BALLS BRIDGE’ 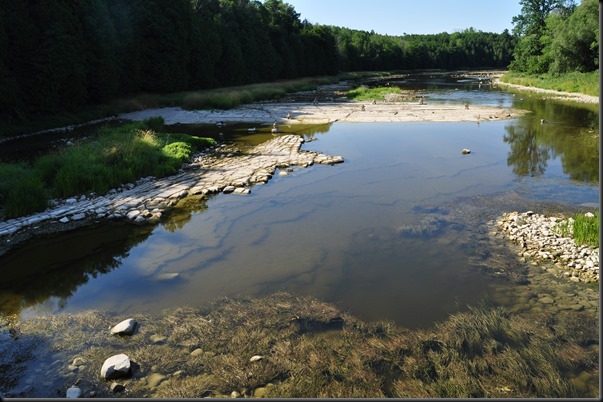 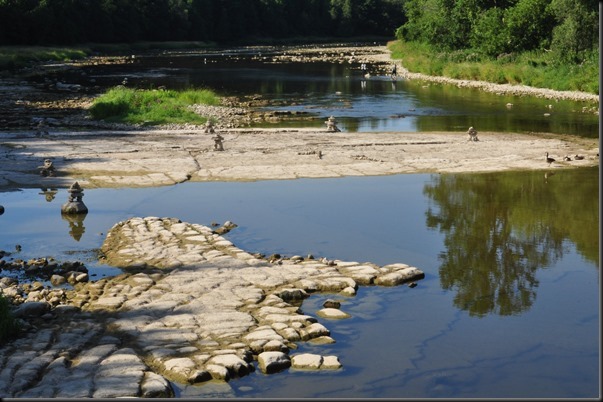 LOOK CLOSELY, IN THIS PHOTO THERE ARE 6 INUKSHUKS, 1 CANADA GOOSE AND 2 PEOPLE FISHING 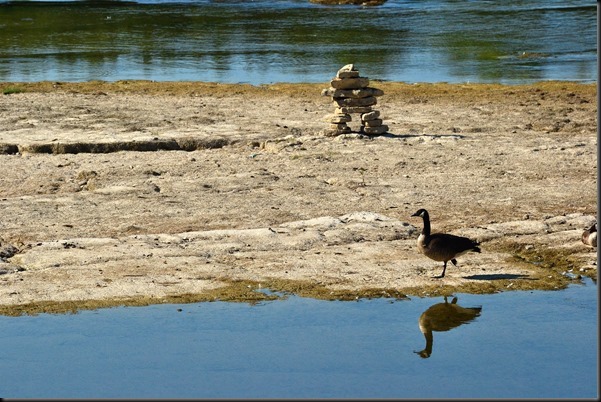 THERE’S THE GOOSE ALONG WITH 1 INUKSHUK 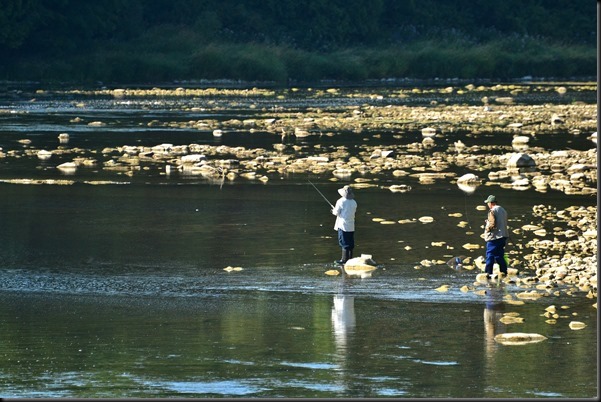 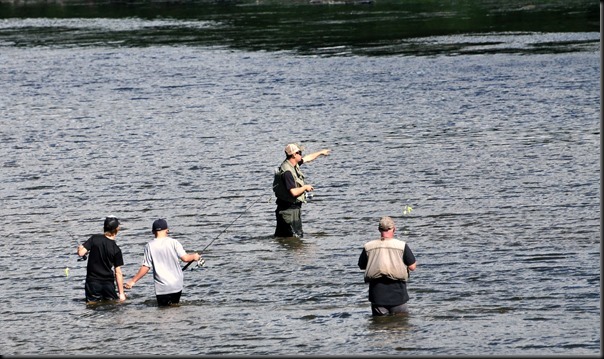 FISHERMEN ON THE NORTH SIDE OF THE BRIDGE 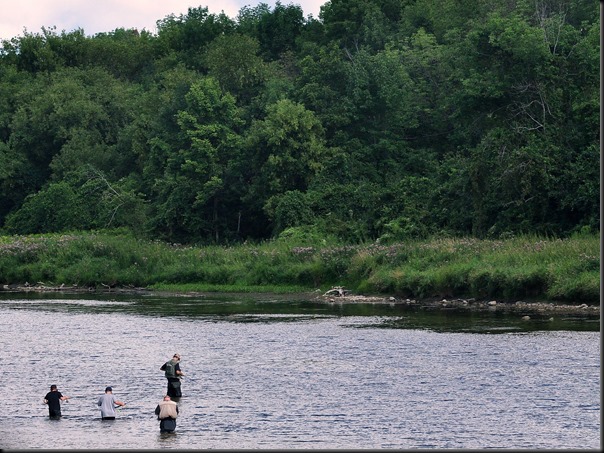 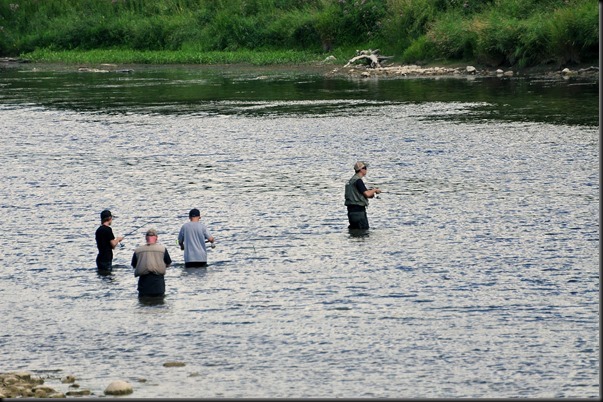 It’s been nearly a year and a half since we bought our 2007 Jeep Liberty and I still am sure liking it.  It’s everything our 06 2 door Wrangler was and more.  We never had A/C in the Wrangler but we’re sure loving it in the Liberty.  Four power windows instead of 2 manually cranked windows sure is a big plus and how much easier now juggling a cup of coffee with a carrot muffin and 2 DSLR cameras with an automatic transmission as opposed to a 6 speed manual tranny.  And how much smoother the ride with Libby’s larger tires and longer wheelbase.  More torque and high end speed in the Liberty as well.  And then there is all the extra added room in the back plus a better sound system.  Although Libby is longer than Jeepers it is still narrow enough to fit down all those desert jeep roads and trails we like to drive on.  Libby has taken us everywhere Jeepers did and I have absolutely no regrets about buying our Jeep Liberty……well except one.  Those damn ‘rolling locks’!!!  I have to manually flick an unlock switch on the driver’s door every single solitary time I get out of the Jeep or else it locks the passenger door plus 2 back doors and the back hatch.  Every time!!!! !!@#%&**#!! 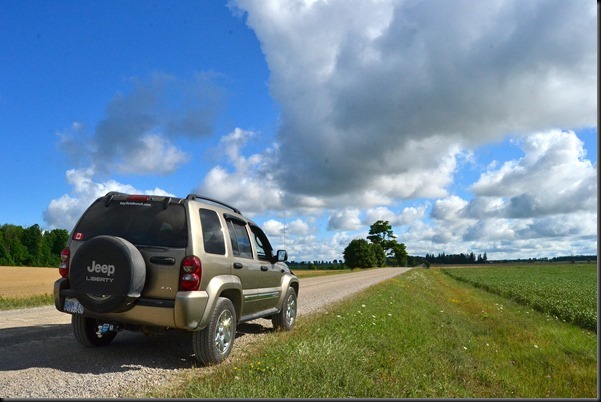 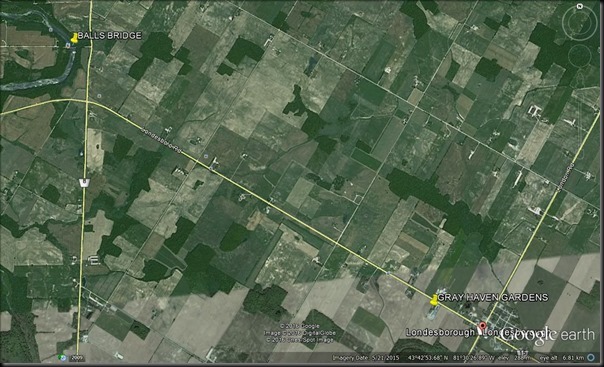 Just think, in less that a month from now we will be on the other side of 2016’s Labor Day week-end which will be just 4 short weeks away from Thanksgiving here in Canada.  And then a week or two after that…….we’re gone:)))))))) 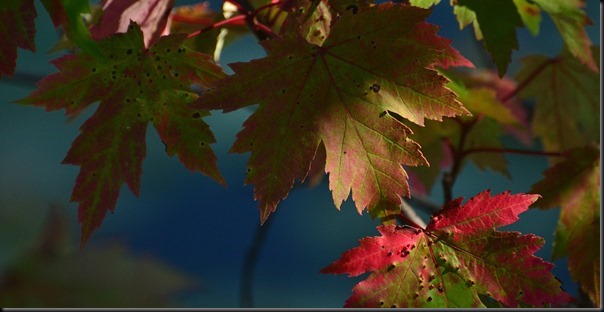 GROANER'S CORNER:((  Two old guys, Abe and Sol, are sitting on a park bench feeding pigeons and talking about baseball, like they do every day. Abe turns to Sol and says, "Do you think there's baseball in heaven?"  Sol thinks about it for a minute and replies, "I dunno. But let's make a deal: if I die first, I'll come back and tell you if there's baseball in heaven, and if you die first, you do the same."  They shake on it and sadly, a few months  later, poor Abe passes on. One day soon afterward, Sol is sitting there feeding the pigeons by himself when he hears a voice whisper, "Sol... Sol..."  Sol responds, "Abe! Is that you?"  "Yes it is, Sol," whispers Abe's ghost. Sol, still amazed, asks, "So, is there baseball in  heaven?"  "Well," says Abe, "I've got good news and bad news."  "Gimme the good news first," says Sol.  Abe says, "Well... there is baseball in heaven."  Sol says, "That's great! What news could be bad enough to ruin that!?"  Abe sighs and whispers, "You're pitching on Friday."

What is the difference between God and a brain surgeon? God doesn't think he's a doctor.