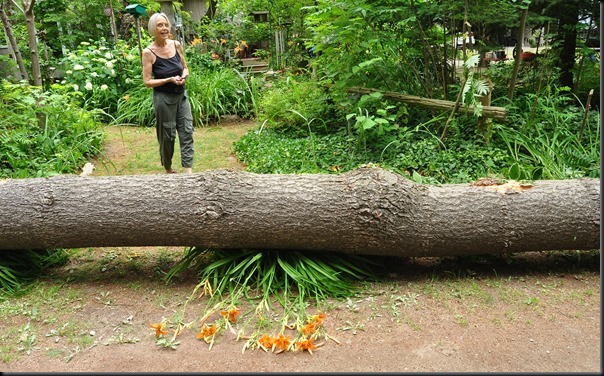 TREE FALL DOWN AND GO BOOM RIGHT ON OUR FLOWERS

A cooling cloud cover made it easier for me to do some outside puttering this morning.  Jim the tree cutter guy started on another large pine tree and I using my swede saw was able to cut up a couple smaller weed trees and pile them on the road.  Turns out my pile came in handy later when Jim and another tree cutter from Dublin Ontario decided to drop one of the large pines using my little pile of branches as a cushioning buffer.  Half an hour later they dropped a second tree and in no time the Dublin fella had both trees cut up into 8 foot lengths and loaded onto his waiting logging truck. 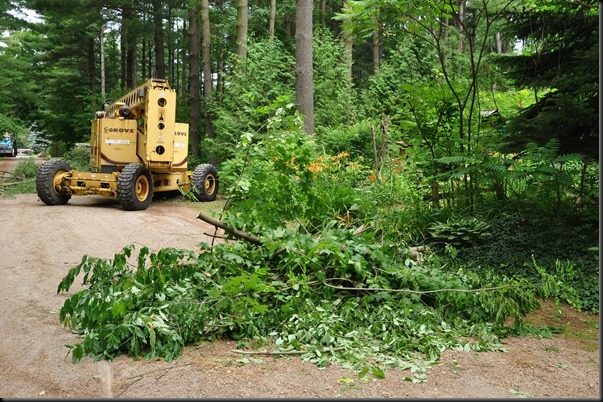 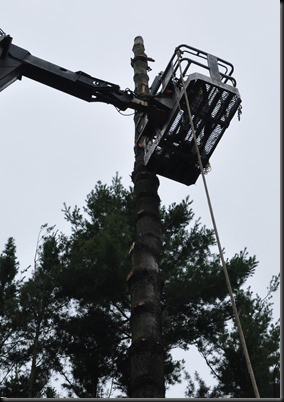 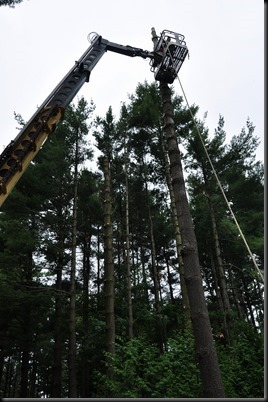 JIM HAULS A LONG HEAVY DUTY ROPE UP AND SECURES IT TO THE TOP THIRD OF THE TREE….THE OTHER END WILL BE TIED TO THE BOBCAT AND PULLED TAUT 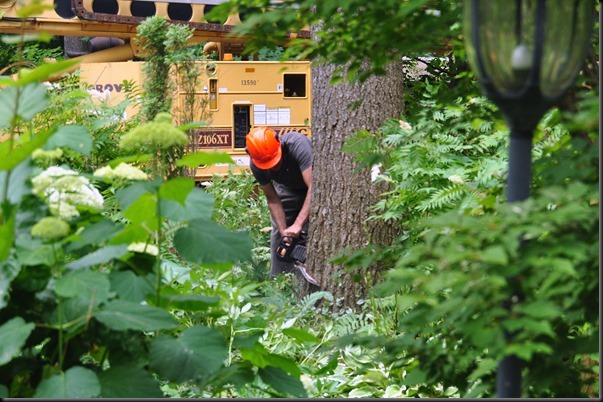 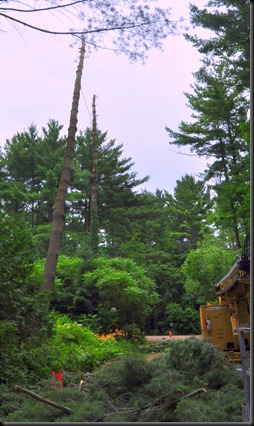 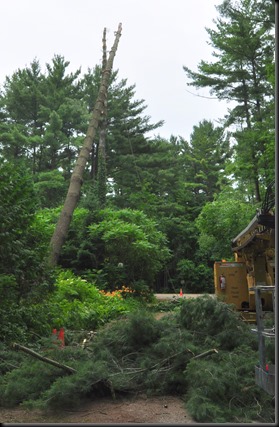 “TIMBER’ AS THE FIRST TREE COMES DOWN 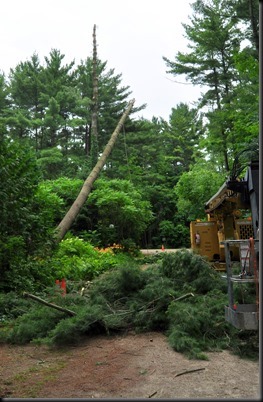 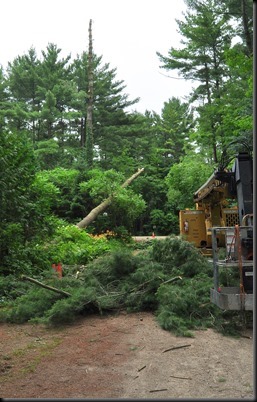 Those big trees coming down took a bit of a toll on a couple flowerbeds but no matter because all that stuff will grow again and besides we’re going to be making some changes to our front yard anyway.  And here’s another added bonus for having those trees taken down.  Long time readers well know how much I enjoy standing out under the stars most every night while we are in the Southwest each winter.  For 14 years I have only been able to see a small patch of sky through the tall pine trees in our front yard and have always missed my amateur Astronomy stargazing here.  Now I can’t see from horizon to horizon like in wide open Arizona but I do have a much better view now of the sky overhead and for sure as of today future stargazing is going to be a whole better than past stargazing right here at home for me:)) 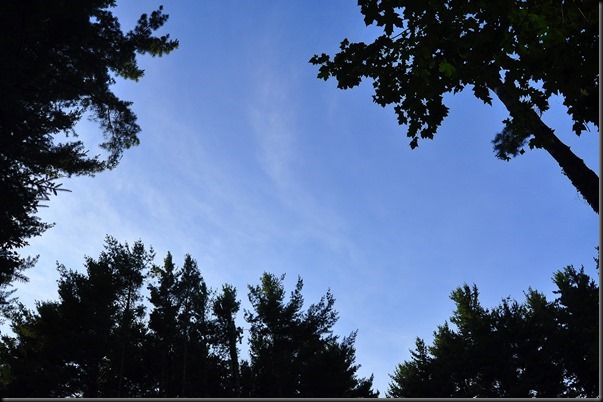 MAYBE NOT PERFECTLY CLEAR BUT A WHOLE LOT BETTER THAN THE WAY IT WAS:)) 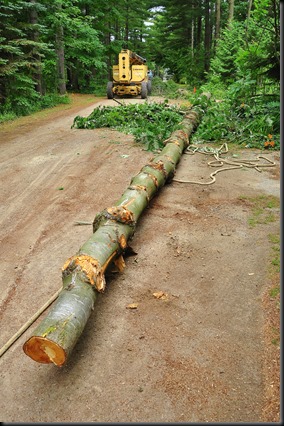 Back in 2011 I had a little blurb at the end of my posts sometimes I called ‘The Last Paragraph’.  It was simply where at the end of the day I would voice some of my thoughts and opinions.  Here’s one of my ‘Last Paragraphs’ from July of 2011.  “Years ago when I attended many AA meetings, one of the Slogans frequently used in the program was, Principles Before Personalities' & it is a tough one to follow.   It has various interpretations but basically means you do not have to attack a person personally just because you do not agree with their ideals, beliefs or policies.   I may not agree with a person's religion or political leanings or someone's choice of color for their car.  I may disagree with somebody's ideas on hunting or their choice of travel destination but it is the issues (Principles) that should be debated & not the individual (Personality) slandered. I have always remembered that & tried to keep it foremost in mind when composing my posts, responding to or leaving comments on other people's posts, forums, or social networks”. 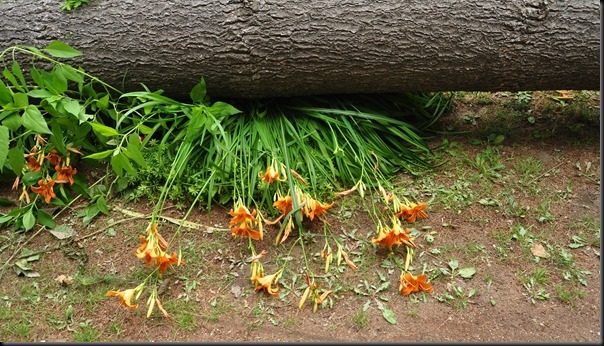 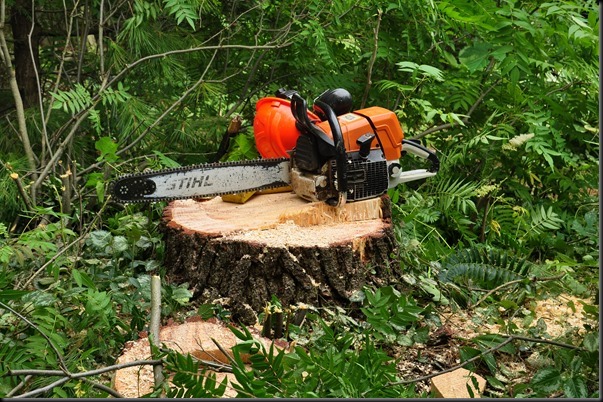 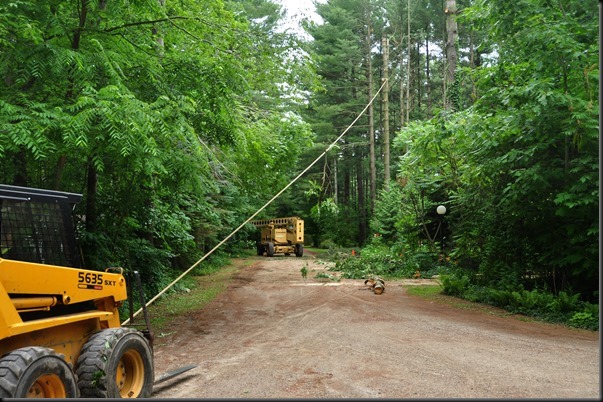 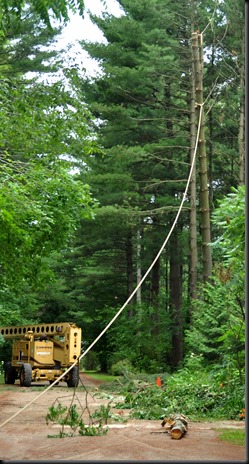 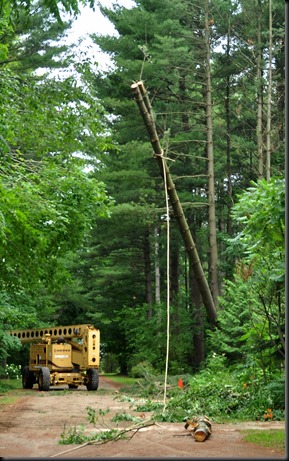 “TIMBER’ AS TREE NUMBER 2 COMES DOWN 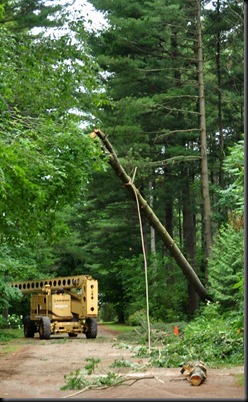 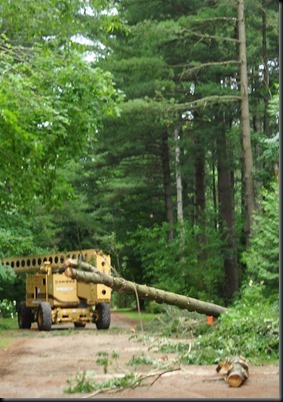 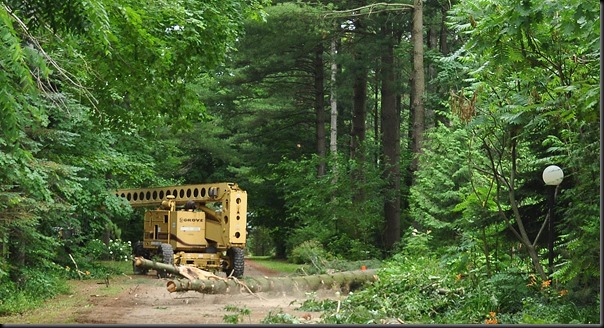 ‘KA-BOOM’ AS THE TREE STRIKES THE GROUND 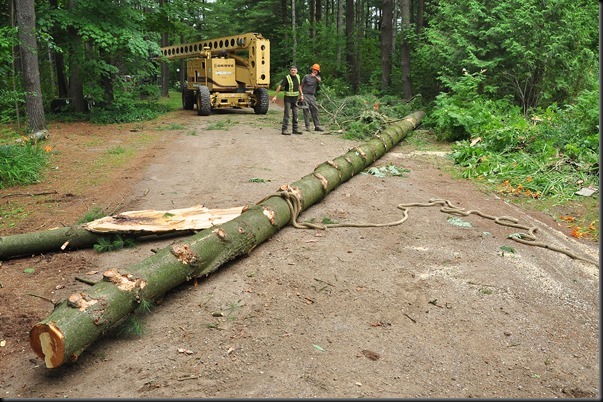 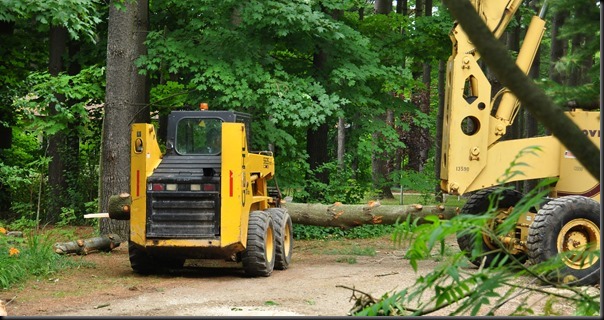 BOBCATING TODAY’S PINE LOGS BACK TO THE LOGGING TRUCK 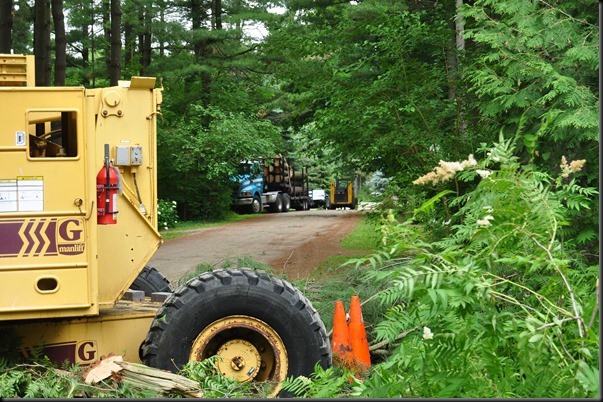 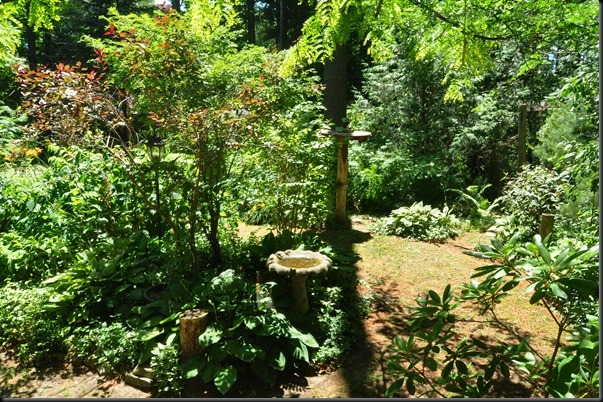 In case anyone is interested here is a little something I wrote back in September of 2008 called, Ode To My Coffee Cup. 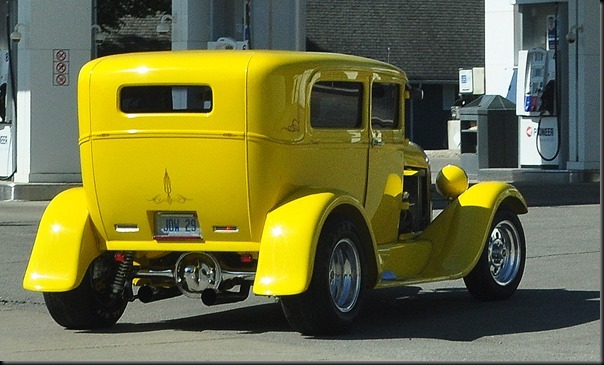 GROANER’S CORNER:((  A woman in a hot air balloon realized she was lost.  She reduced altitude and spotted a man below. She descended a bit more and shouted: 'Excuse me, can you help me? I promised a friend I would meet him an hour ago but I don't know where I am..' The man below replied, 'You're in a hot air balloon hovering approximately 30 feet above the ground. You're between 40 and 41 degrees north latitude and between 59 and 60 degrees west longitude.' 'You must be an Engineer,' said the balloonist. 'I am,' replied the man, 'how did you know?' 'Well,' answered the balloonist, 'everything you have told me is probably technically correct, but I've no idea what to make of your information and the fact is, I'm still lost. Frankly, you've not been much help at all. If anything, you've delayed my trip by your talk.' The man below responded, 'You must be in Management.' 'I am,' replied the balloonist, 'but how did you know?'  'Well,' said the man, 'you don't know where you are or where you're going. You have risen to where you are, due to a large quantity of hot air. You made a promise, which you've no idea how to keep, and you expect people beneath you to solve your problems. The fact is you are in exactly the same position you were in before we met, but now, somehow, it's my fault.'

An Englishman, Frenchman, Mexican, and Texan were flying across country on a small plane when the pilot comes on the loud speaker and says " We're having mechanical problems and the only way we can make it to the next airport is for 3 of you to open the door and jump, at least one of you can survive"  The four open the door and look out below. The Englishman takes a deep breath and hollers "God Save The Queen" and jumps.  The Frenchman gets really inspired and hollers "Viva La France" and he also jumps.This really pumps up the Texan so he hollers "Remember the Alamo"……….. and shoves the Mexican out the door.