HAD MYSELF A FEW ‘HITCH-ITCH’ TWITCHES TODAY 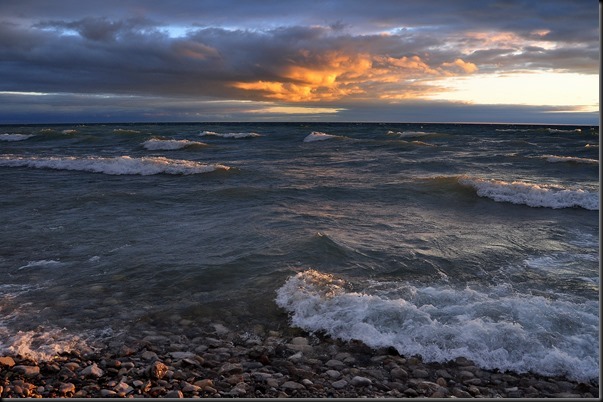 My good Buddy Richard and I had missed our last two country road coffee tours over the past month due to other commitments but we were both free to rumble this morning & off we went.  My turn to drive so our travels took us down around the Grand Bend & Exeter areas.  Lots to talk about & lots to see.  Always interesting, always enjoyable & what a fine weather morning it was too. 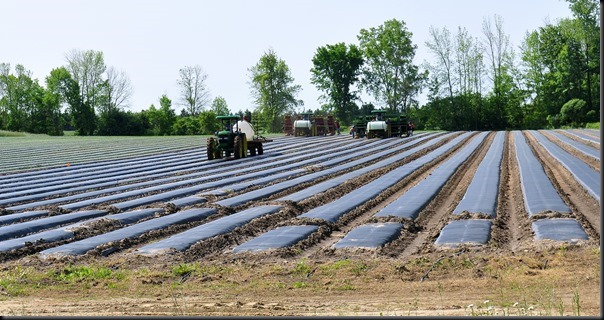 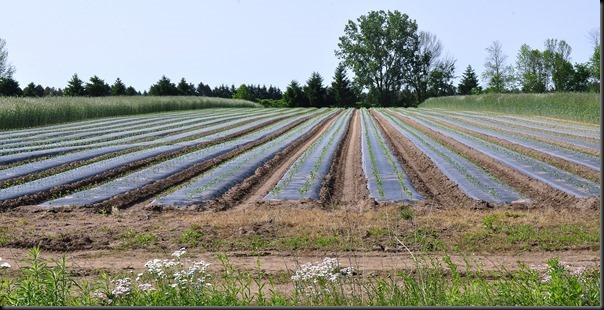 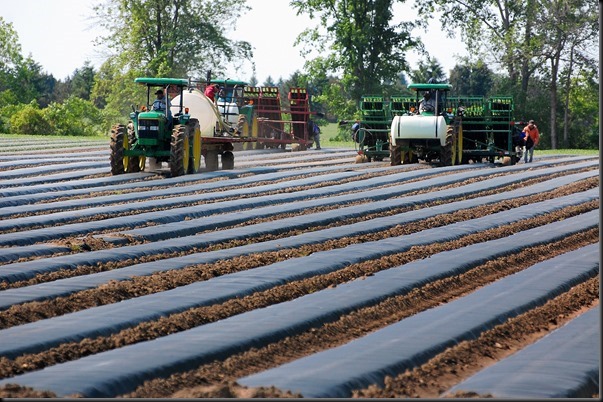 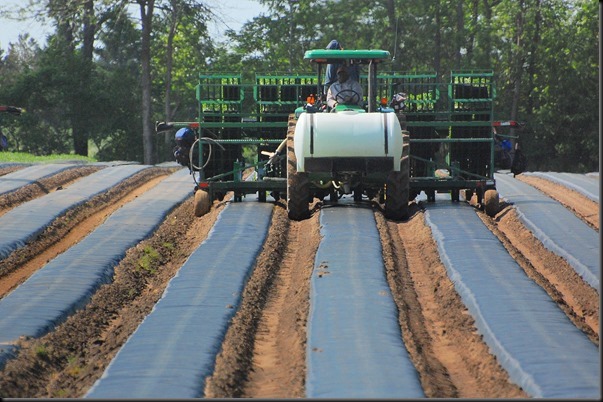 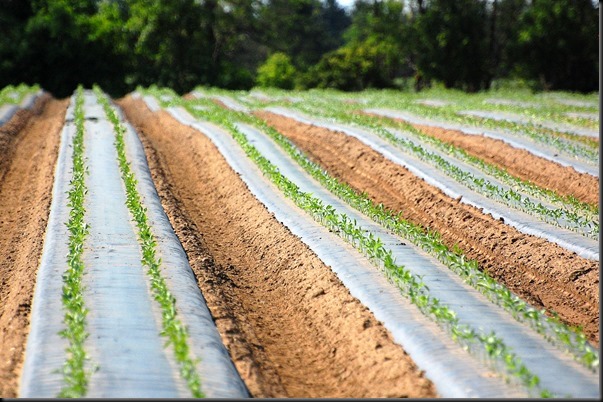 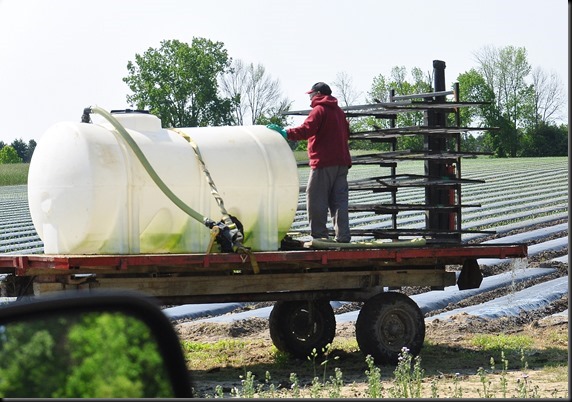 Kelly & I busied ourselves in the afternoon going through a lot of our 'stuff' prioritizing what to keep & move back into the house from our carport.  What dressers to keep & what to keep in those dressers.  I also cleaned all our sunroom windows & hosed down a lot of the pine pollen dust on our deck etc.  Some weed whacking at a neighbor's & half a dozen other little things I've already forgot about.  At a sunny 55F today it was great for getting a lot of those outside chores done. 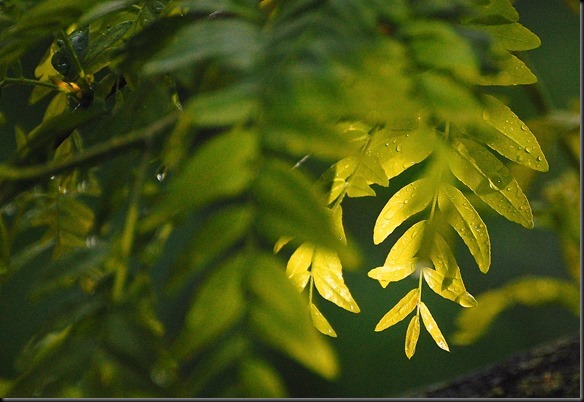 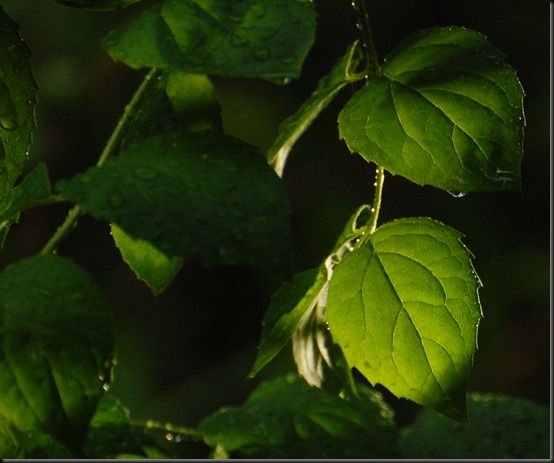 Thanks to a few readers for giving us a 'heads up' about that fire in Yarnell Arizona.  I quickly checked a few sites Wednesday night & was able to determine the fire's location & could see it was not a threat to our Congress house a few miles away at the foot of the Weaver Mountains.  As long as the wind didn't shift & begin blowing from the Northeast that is.  Had that occurred our house & lot of other houses in the village of Congress and surrounding area could have been at risk from airborne burning  embers.  Fortunately we have a steel roof on two thirds of our house & I had cleared all the brush off the property & away from around the house over the last 4 years.  Every little bit helps when it comes to fast moving wild fires.  Update::  Just after publishing this tonight Kelly read me an update on the Yarnell fire.  For some reason I had thought the fire was under control but as of this afternoon winds had spread the fire to over 1200 acres & the the whole town of Yarnell has been evacuated with warnings going out to folks living Northeast of Yarnell in Peeples Valley to be on the alert for possible evacuation as well.  Yarnell and Peeples Valley are areas we know well and feel so bad for all the people there as well as the animals.  Horse ranching is big in that region. 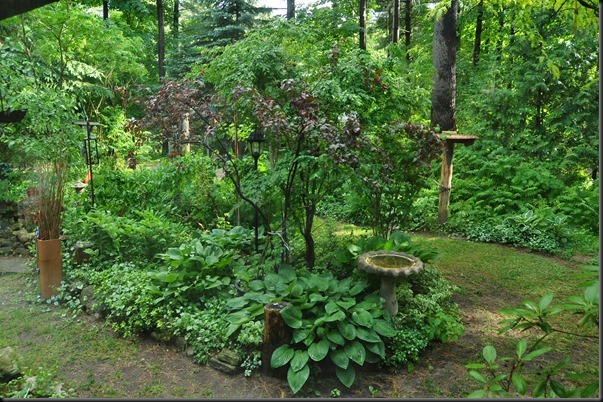 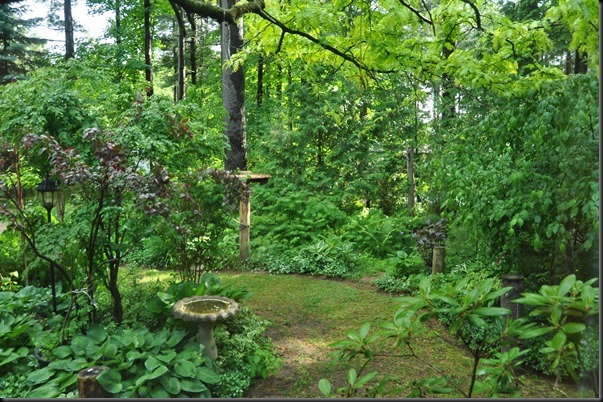 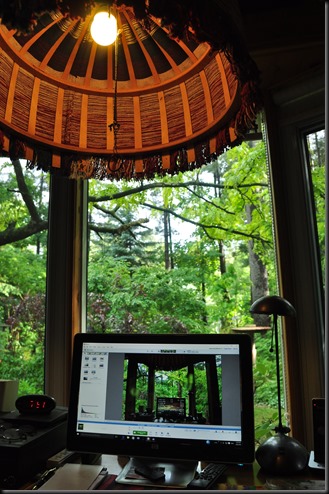 A NICE GREEN WOODSY VIEW FROM OUR COMPUTER STATION >>>>

Thinking about Congress Az. tonight I noted that in 3 weeks we will once again be at the half way point for returning to the Southwest in the Fall & that thought for the first time since we arrived home late last March stirred a very familiar feeling in me.  ‘Hitch-Itch’.  I'm already looking forward to this winter's travels which this year will first take us to Florida to visit Aunt Jean.  We generally leave somewhere around the third week in October but it's still way too early to nail us down a definite departure date yet. 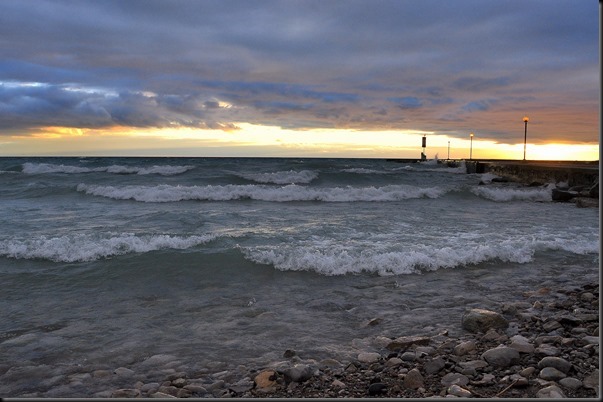 THESE ARE THE LAST OF MY ‘CATCH-UP PHOTOS 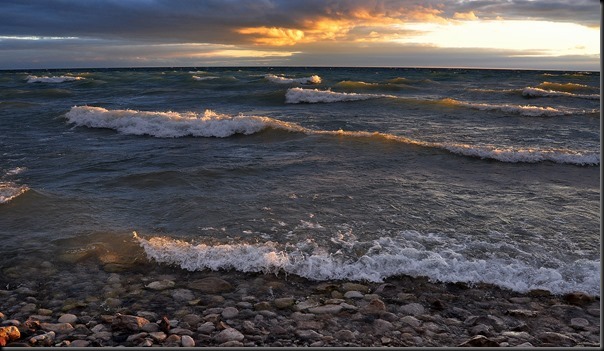 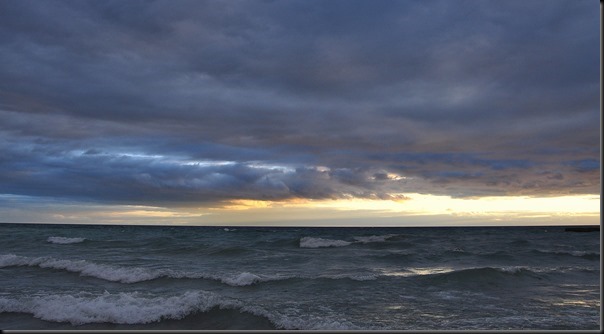 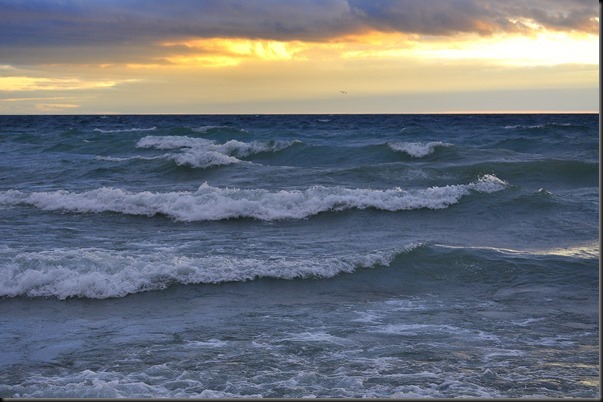 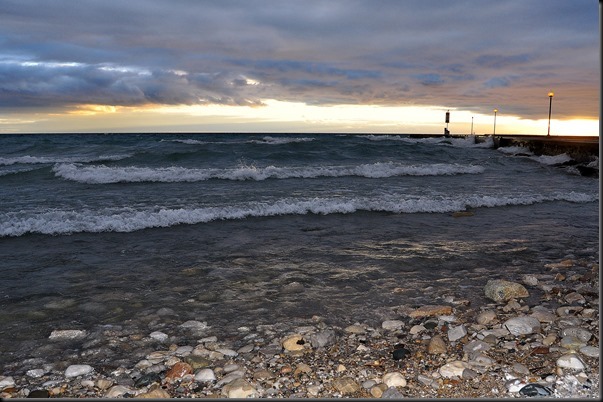 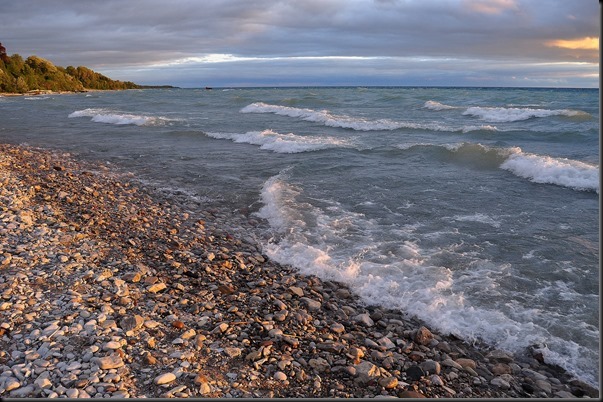 With RV thoughts in my head & now that the annual pine pollen menace is over for another year it's once again time to turn my attention and energies to Summer's big Motorhome clean-up inside and out.  I'm actually looking forward to that and always find it a nice change of pace and especially like how it stirs all those great RV travel plans and feelings inside.  Just being in and around the Big EEE is exciting in itself.  Gives me the warm fuzzies:)) 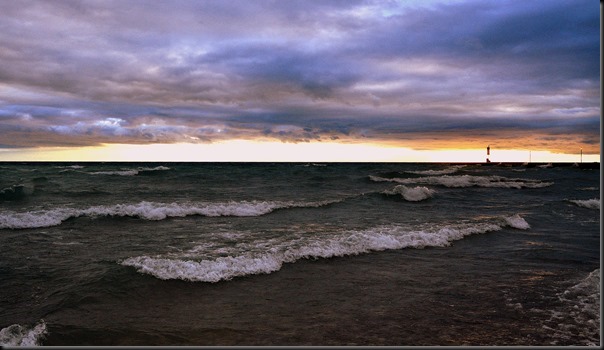 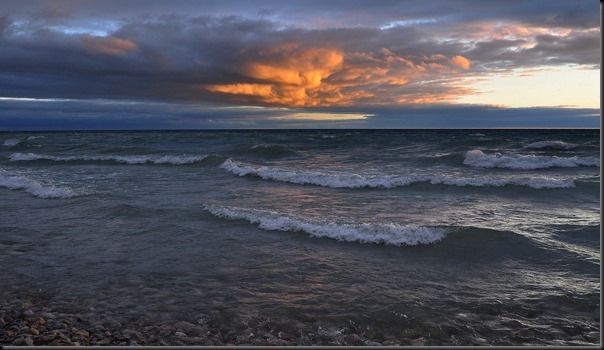 Our thoughts & get well wishes tonight go out to Polly, Nina and Paul from Wheeling it after Polly recently injured a hind leg & has just come through surgery to repair it.  Possibly a long recovery ahead has Nina & Paul’s summer Jell-o plans wobbling.  And over at the Weibel Ranch their road is still a bit rocky as Sam takes a header while moving Donna to a re-hab center for hopefully a short stay.  And again I ask, ‘has anyone heard how Retired Rod is doing?? 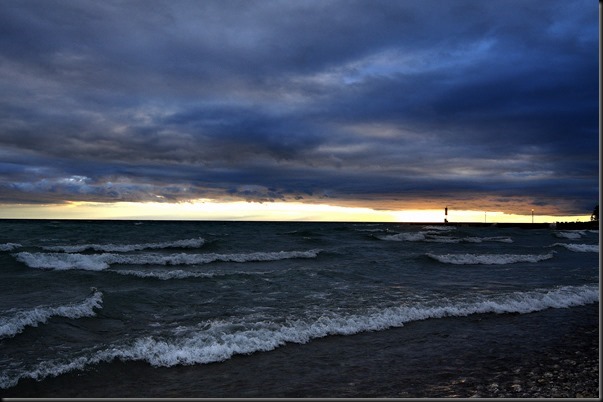 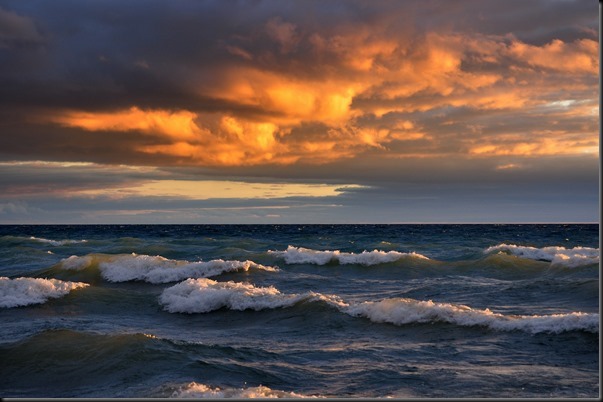 Pheebs and I will be on the road in the morning to see if we can scratch us up some new photos & Friday afternoon I meet up with my good Buddy Jim for another one of our marathon coffee blow-outs.  You can find Jim’s fine writing tales on my sidebar under Lifetime Sentences. 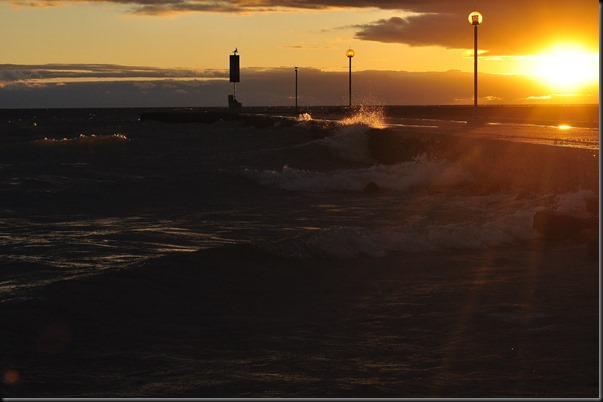 GROANER’S CORNER:(( Two lawyers, John and David, head out for their usual 9 holes of golf. John offers David a $50 bet. David agrees and they're off. They do a great game. After the 8th hole, David is ahead by one stroke, but cuts his ball into the rough on the 9th.  "Help me find my ball. Look over there,'" he says to John. After a few minutes, neither have any luck. Since a lost ball carries a four point penalty, David secretly pulls a ball from his pocket and tosses it to the ground. "I've found my ball!" he announces.
"After all of the years we've been partners and playing together," John says, "you'd cheat me out of a lousy 50 bucks?"  "What do you mean, cheat? I found my ball sitting right there!"
"And you're a liar, too!" John says. "I've been STANDING on your ball for the last five minutes!"

AL’s Old Scratchings……..Keep in mind if you read this, it was the late 60’s.  Typical of so many of my generation at the time I was an angry, rebellious and independent kind of character trying desperately to find out just where it was I could fit myself into society.   Some days I think to myself…..not much has changed.