TWO STRANGERS WAVE & BRING A MOMENTS HAPPINESS TO EACH OTHER 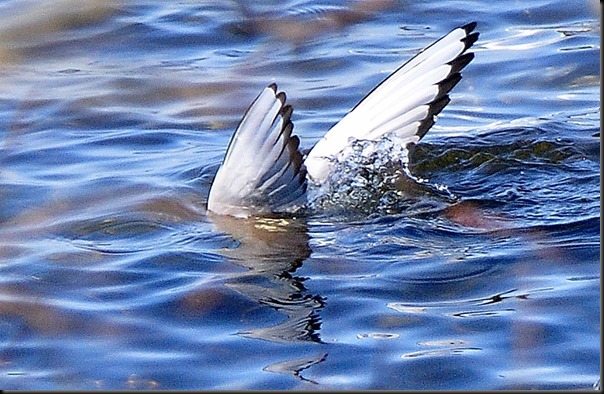 I SUSPECT A BIT OF FISHING GOING ON  HERE  (ALL PHOTOS TODAY WERE TAKEN WITH MY SIGMA LENS) With Lake Huron's placid waters brushing quietly against Eastern shorelines it was only Pheebs & I who noticed the muted gurgling sounds of ripples playing among sandy beach pebbles & smooth water worn rocks.  We were the only one's walking the hilltop shoreline in Goderich's dog Park this morning. 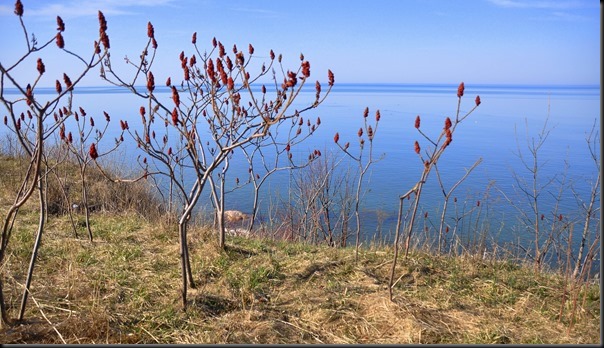 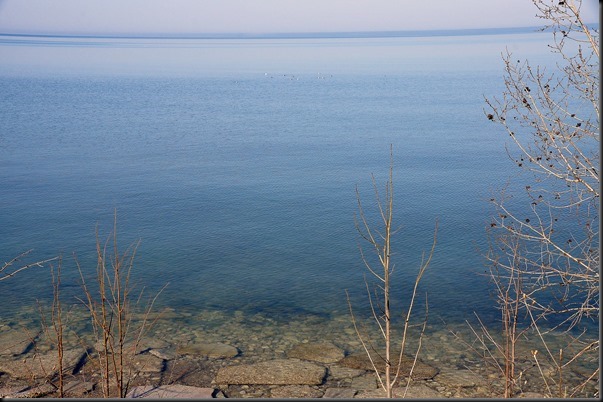 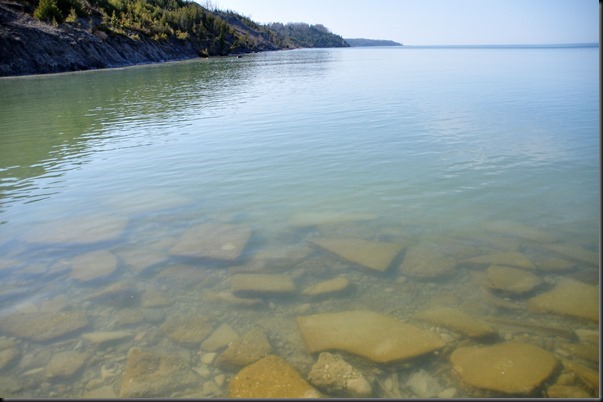 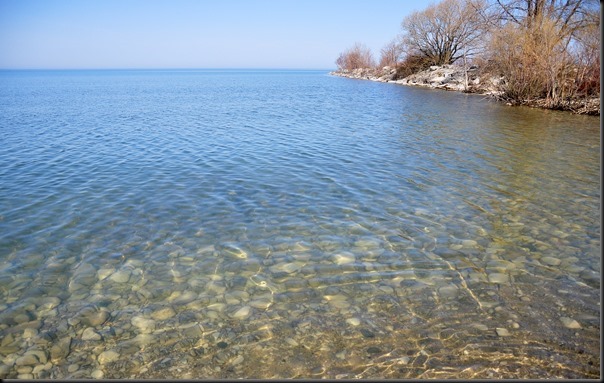 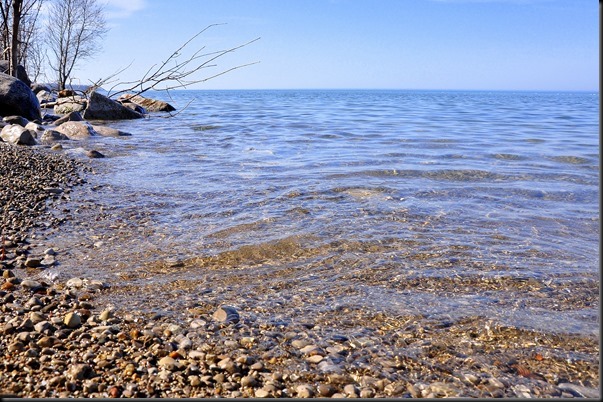 Needing a new 2016 sticker for my motorcycles license plate I filled out the form at home & with Pheebs checking it over looking for my usual mistakes & finding none we were off to the License Bureau in Goderich.  I was in & out of there in under 5 minutes.  Nice. 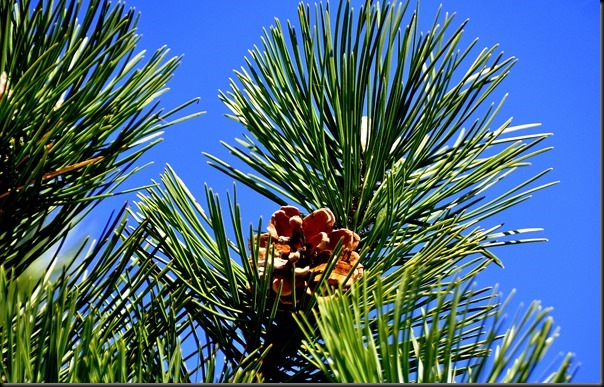 After pouring more thought into my camera lens dilemma I decided to haul out, dust off, & fire up my Sigma lens once more.  Figured I would try it out again so on the way to Goderich this morning I snapped a few 'drive-by' farm houses along the way. 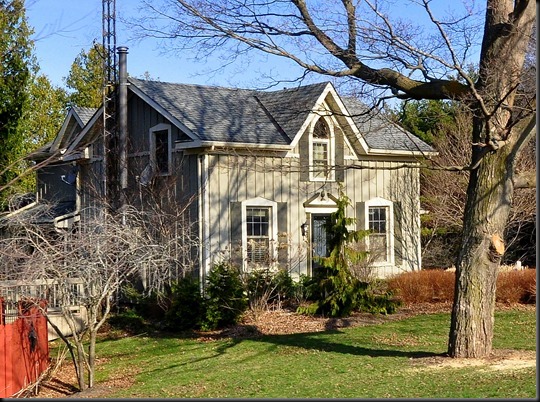 A FEW FARM HOUSES ON OUR WAY TO GODERICH….FIRST 3 PICS ARE THE SAME  HOUSE  (ALL MY FARMHOUSE PICS TODAY WERE DRIVE-BYS) 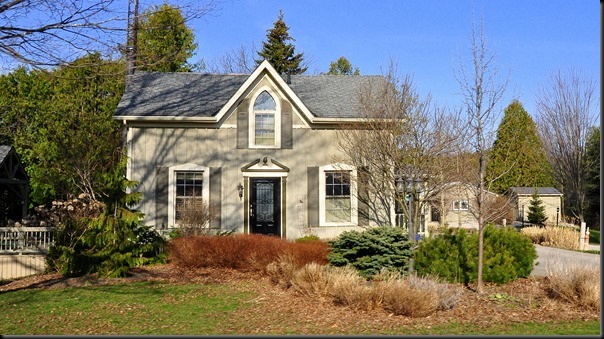 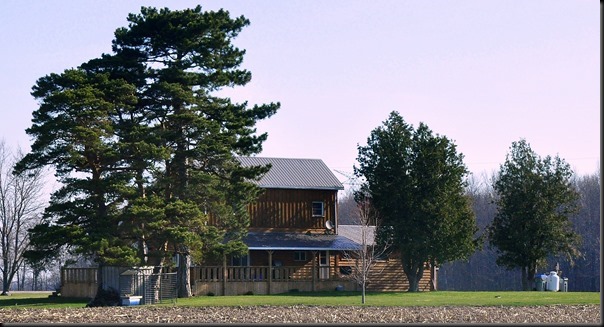 BACK IN MY ‘STRATFORD AIRPORTER’ DAYS I WOULD OCCASIONALLY DRIVE A DUTCH LADY FROM THIS HOUSE BACK & FORTH TO THE TORONTO AIRPORT……THAT WAS ABOUT 25 YEARS AGO & WE USED TO TALK ABOUT RVING…..HER & HER HUSBAND HAD A VOLKSWAGON CAMPER VAN BACK THEN
Yet another mighty fine weather day so we headed ourselves down around the harbor & along the beach to Rotary Cove.  Noticed lots of folks out strolling the long boardwalk along the shoreline.  Years ago we had an elderly neighbor lady here in the Park who would drive to Goderich every morning just after sunrise & walk that boardwalk for as far as she could.  She’s gone now but I still think of her whenever i drive along the boardwalk now.  A lot of folks stroll there in early evening & take in the sunset.  Mighty nice way to wrap up ones day.

A MORNING STROLL ALONG THE BOARDWALK 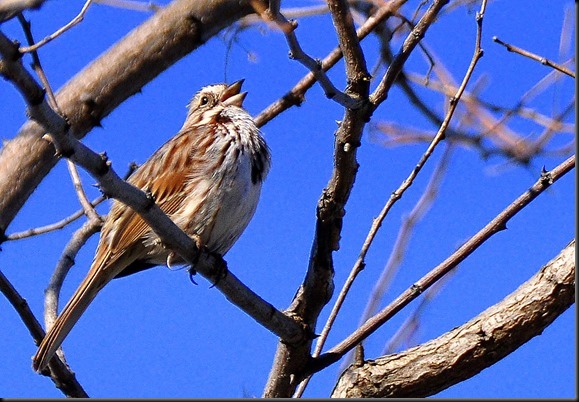 THIS LITTLE FELLOW WAS JUST A SINGING THIS MORNING 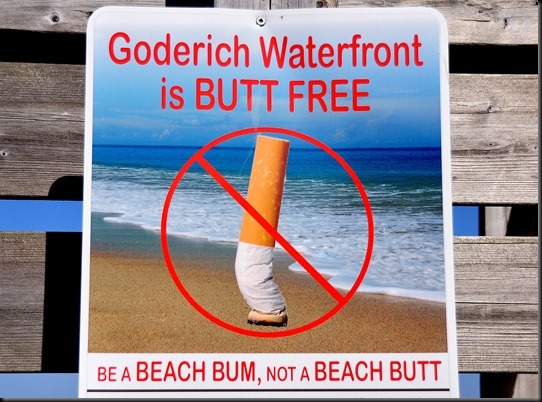 A SIGN ON THE BACK OF THE LIFEGUARD TOWER
I saw there was nobody at the dog walking area so little Spoogers & I bailed out of the Jeep & headed south down along the shoreline.  Again it was one of those magical mornings with the air alive once again with many melodious bird songs & how nice to watch Gulls, Terns, Cormorants, Ducks & Geese arcing their way over Lake Huron’s blue waters to alight with a distant splash just somewhere offshore. 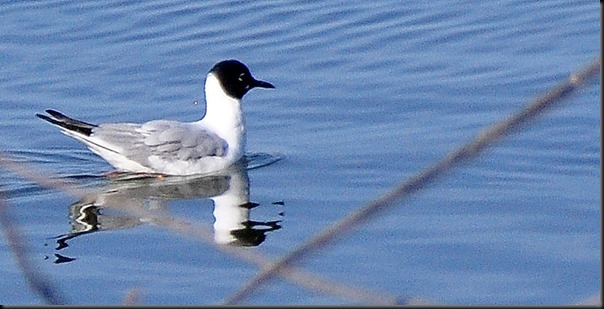 DUCKS OF COURSE BUT I DON’T KNOW WHAT KIND

GUESSING THESE FELLOWS AS CORMORANTS 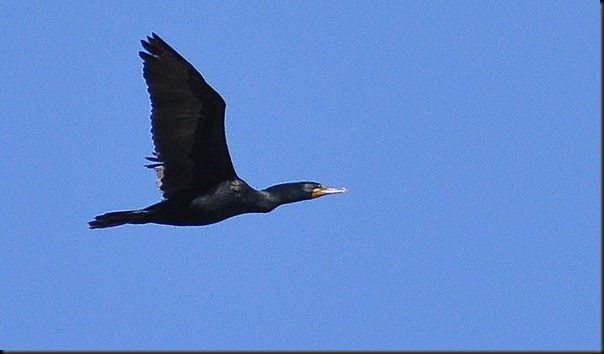 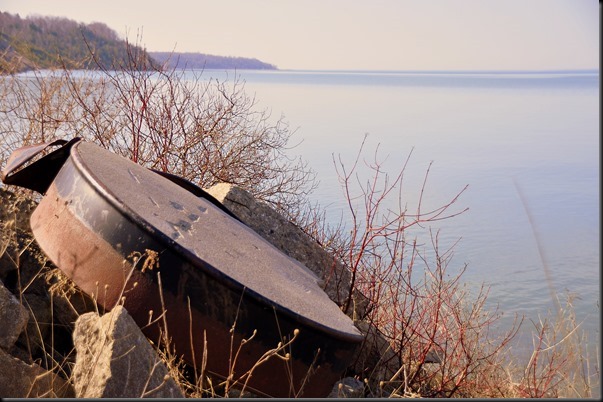 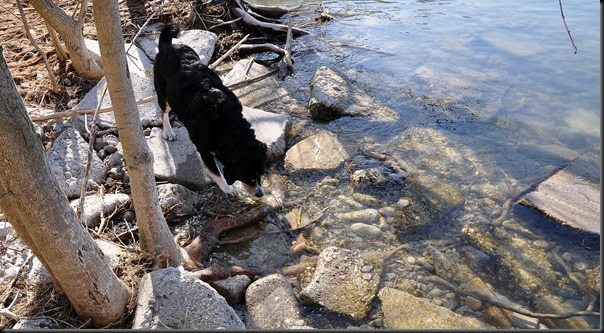 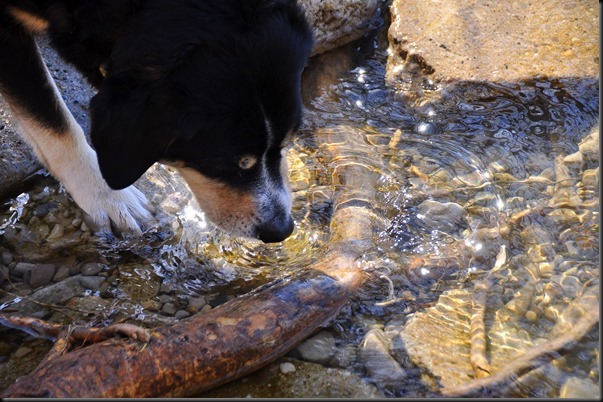 Walking the shoreline I continued testing the lens with a variety of shots including telephoto & wide angle scenics.  Everything from 18mm to 250mm & by the time we got home later I had 114 test photos to go through.  Some of the stuff is sort of Okay but the lens really falls down when it comes to those telephoto shots.  I generally have to do a lot of cropping with my long range shots as it is & with the Sigma lens those photos really begin to fall apart fast.  All of tonight's photos were taken with my Nikon D-90 & Sigma lens & you may very well notice most of the telephoto shots are just not the best. 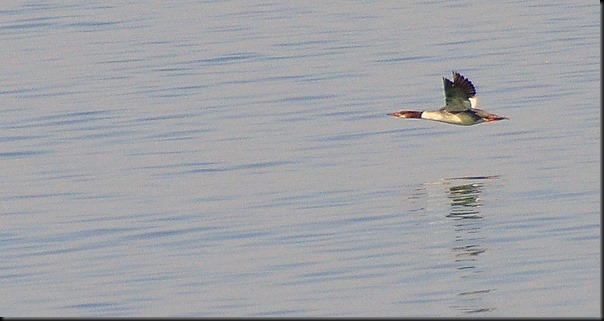 BUT I DO  KNOW MY CANADA GOOSES:))

Affixed the new sticker to the bike's plate then figured I'd better take myself for a cruise around the countryside to make sure I had the sticker on properly.  A fine day for a bike ride as I headed over through Varna then across to the small village of Zurich where I tore up the streets before heading home.  Well Okay the streets kinda tore me up near a construction zone before kicking me out of town.  I was back home about 40 minutes after I had left.  Kelly was in Goderich for a Dentist appointment.  Pheebs was at the window bouncing up & down when I rolled in.  Us guys are always so happy to see each other even if we've been apart for 2 minutes:))

WHILE TAKING THIS PHOTO EARLIER TODAY THE LARGE LAKE FREIGHTER WAS SLOWLY MOVING FORWARD TO POSITION HER NEXT CARGO HOLD UNDER THAT FAR ROBINS EGG BLUE SALT LOADER….THEN SOMETHING ELSE CAUGHT MY EYE ALONG THE SIDE OF THE SHIP 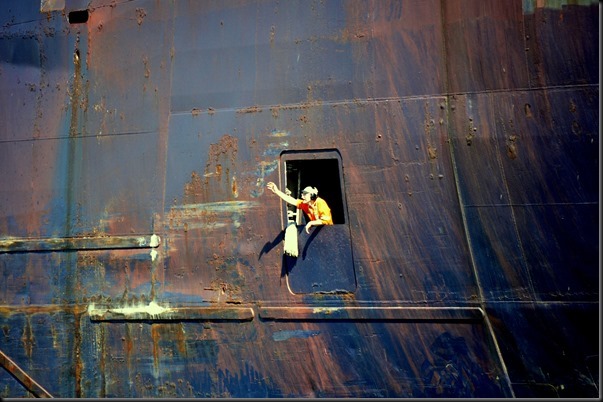 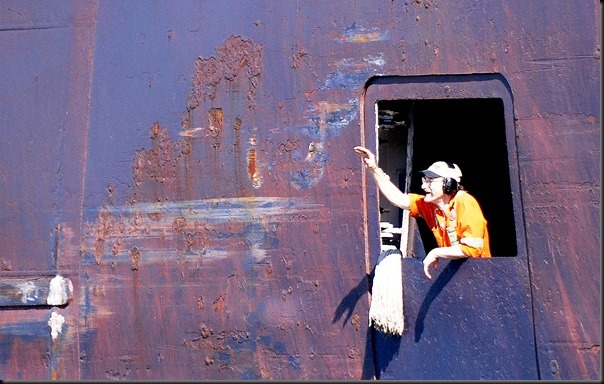 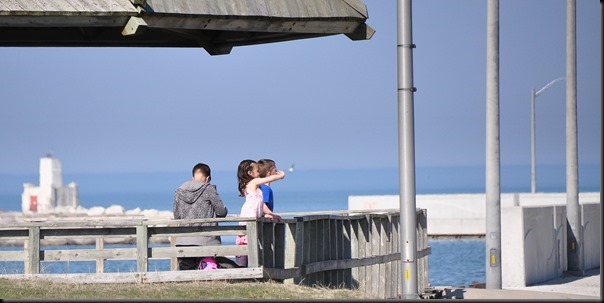 I DON’T THINK THEY KNEW EACH OTHER BUT HOW NICE FOR 2 STRANGERS TO WAVE & BRING HAPPINESS TO EACH OTHER…..JUST LOOK AT THOSE SMILES:)) 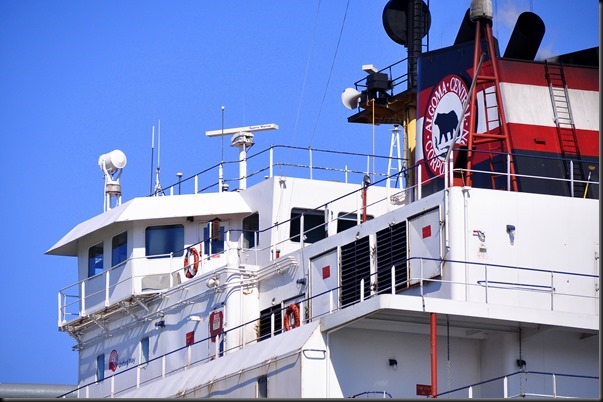 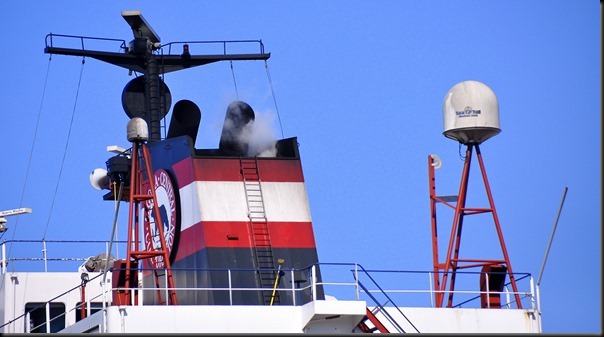 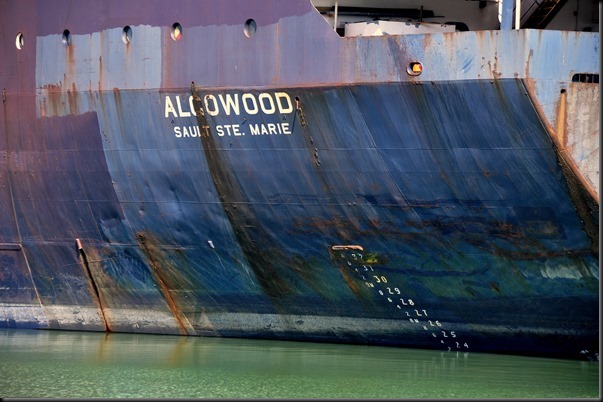 THE ALGOWOOD BASED OUT OF SAULT STE. MARIE ONTARIO

After inserting today’s photos in my post tonight I have come to the conclusion I’m just not satisfied with the results from my Sigma lens.  Besides the obvious clarity problems I’ve had to crop out out flaring around the edges of the telephoto shots & the color seems off to me.  In my opinion the photos have more of a cheaper ‘point & shoot’ appearance.  Looks like I’m stuck between a rock & a hard place here,  I have a newer lens which works fine but I’m not happy with & an older lens that is not working fine but I was always very happy with.  Oh Dear, what to do, what to do………………. 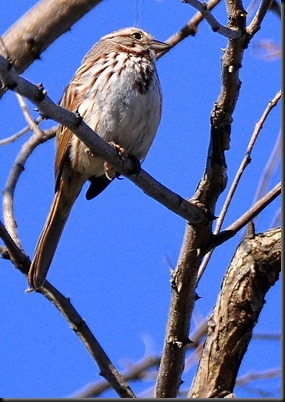 GROANER'S CORNER:(( As we waited for a bus in the frosty weather, the woman next to me mentioned that she makes a lot of mistakes when texting in the cold.  I nodded knowingly. “It’s the early signs of typothermia" & by the way don’t knock the weather. If it didn’t change once in a while, nine tenths of the people couldn’t start a conversation.  Oh & did you know electricity is really just organized lightning.