LANSING MICHIGAN TO BAYFIELD ONTARIO…..WE ALMOST BEAT THE RAIN & GOOD TO BE HOME:)) 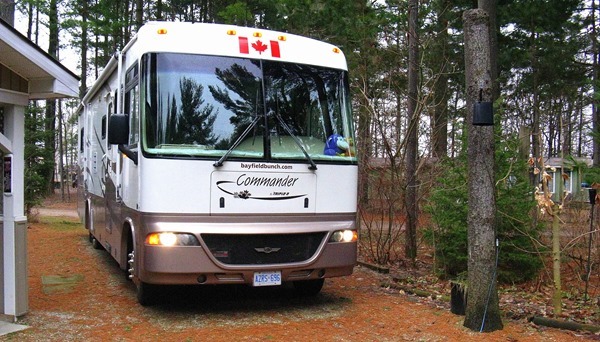 A quiet night behind Lansing Michigan's Cracker Barrel restaurant.  No rumbling train whistles, Interstate traffic noise, or young folks in purposely noisy mufflered cars revving up their engines in a Walmart parking lot.   Kelly had Pheebs & I up by 4 a.m. & i noticed temperatures had definitely dropped overnight.  I was glad it was not raining……or worse.

Despite all Tuesday’s dire weather predictions I was heartened to see a ‘clear’ weather ahead of us all the way to Bayfield when I checked the weather map first thing this morning but close behind us I could see rain closing in.  It would be a race to the finish line in which we were later to come in second.  Freezing rain warnings were out & it was quickly shaping up to be a potentially nasty day.  Time was not to be wasted. 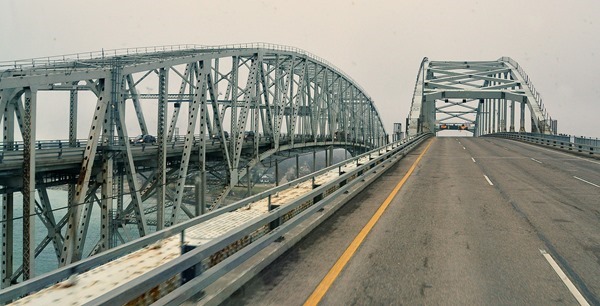 It was dark when we pulled out from behind Lansing’s Cracker Barrel at 6:10 this morning.  Luckily traffic was still light at that hour but an hour later we were mixing it up with Flint Michigan’s morning rush hour on the city’s by-pass.  Pretty mild stuff compared to Des Moines morning rush just a day before.

THAT’S CANADA OVER THERE:))

With a graying mist hanging in the air we rolled up & over the large Blue Water bridge at Port Huron Michigan/Sarnia Ontario.  Lake Huron was visible out our left window with the St. Clair River below leading to Lake Erie far off to the right.  It was 8:20 a.m. & with only 1 vehicle ahead of us at the border crossing we rolled up to the gate.  Nice young fella with the usual questions welcomed us back to Canada & that was it…….we were across the border & back in Canada:)))))) 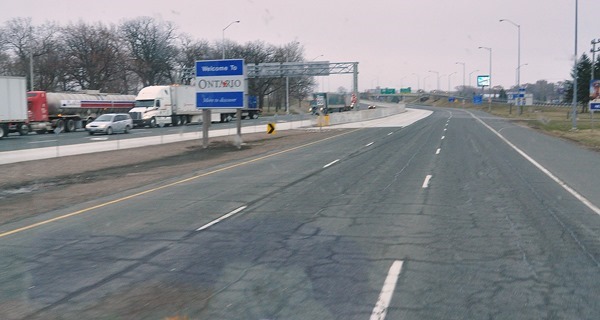 AND A GOOD OLD CANADIAN BARN ALONG THE WAY

Twenty happy minutes later we were in Forest Ontario at Tim Hortons coffee shop for our traditional coming home coffee & doughnuts.  Although a cold & cloudy damp day it was better than a year ago when we stopped at Forest’s Tim Hortons & stepped out of the rig into snow.

PHEEBS IS TOTALLY FOCUSED ON TIM HORTONS WAITING FOR MOM 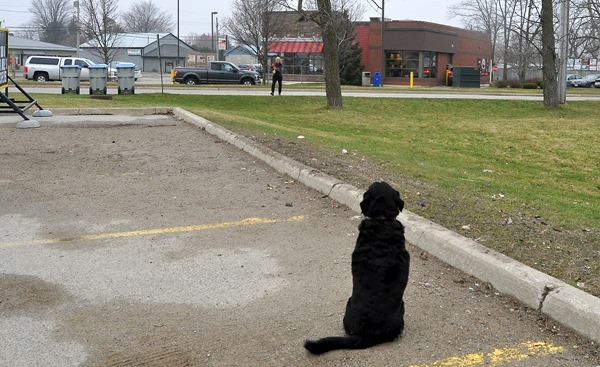 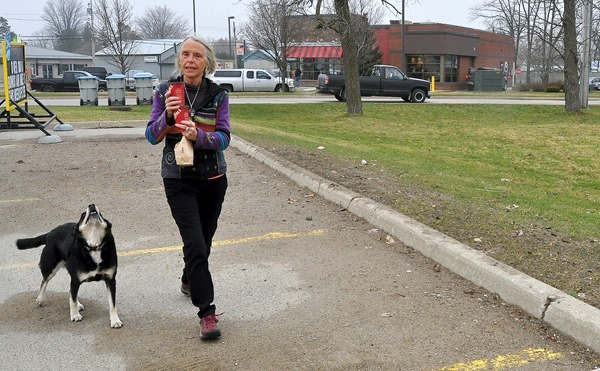 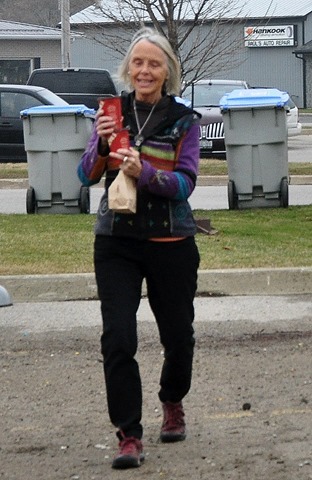 Within a minute of leaving Forest we had ourselves a couple dozen raindrops on the windshield but that was all for the moment.  However motoring into Grand Bend a short time later a light rain began to fall & from there to Bayfield we had our wipers on intermittent.  The rain had beat us home by about 20 minutes.  It was just a few minutes before 10 o’clock when we rolled past STORMRUNNER RV SALES & SERVICE & gave Di 6 big ‘horn honks’ to let her know we were home:)) 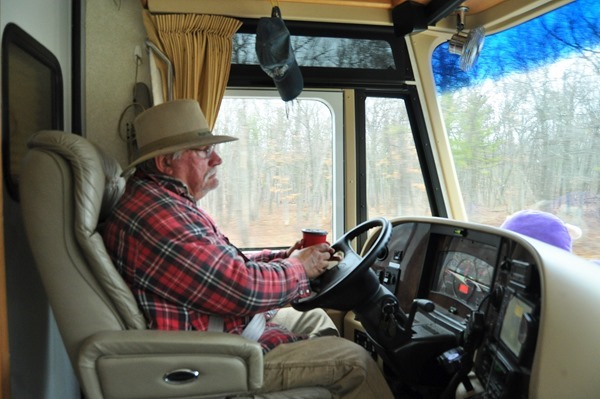 ONLY TOOK ME A FEW SECONDS TO EAT MY APPLE FRITTER DOUGHNUT & HERE I AM WORKING ON MY FIRST ‘TIMMIES’ OF THE YEAR:)) 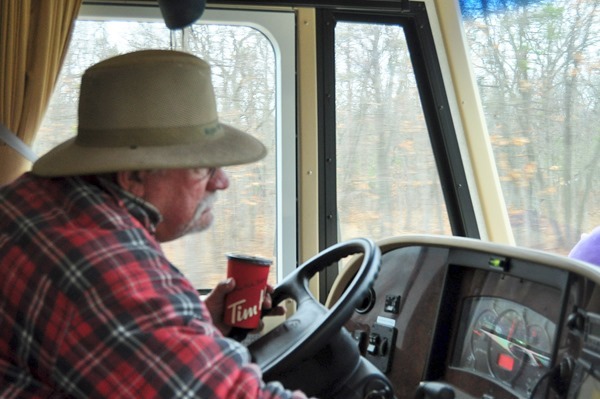 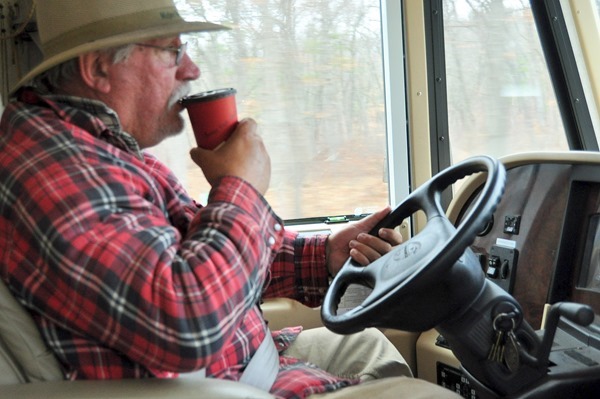 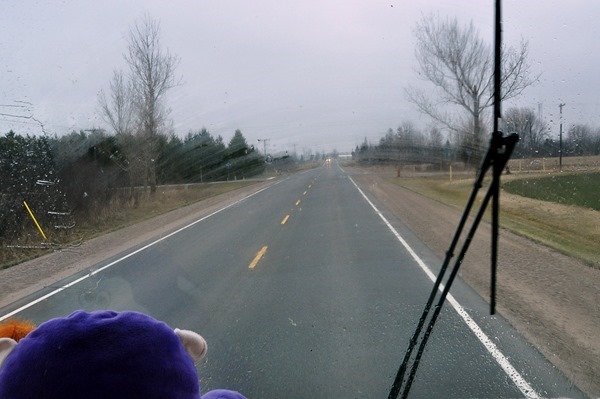 OH-OH A FEW RAIN DROPS ON THE WINDSHIELD 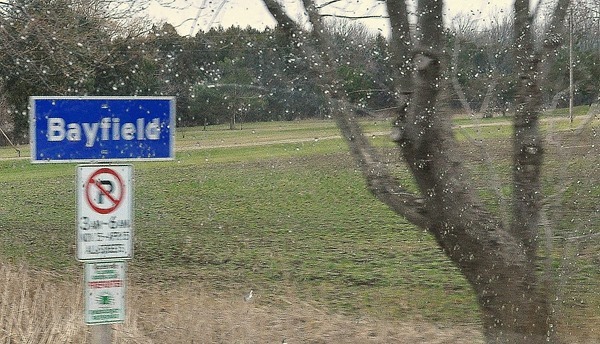 Pulled over on the south side of Bayfield’s Clan Gregor square & unhitched the Jeep.  We were only a mile from home & minutes later we were home.  Ahhhhhhh, how nice it is.  Kelly & Pheebs in the Jeep arrived a minute before I did so Kelly was out taking a few pics of me pulling the Big EEE into it’s summer spot.  It was 10 after 10 & our long tiring & sometimes tedious journey was finally at an end. 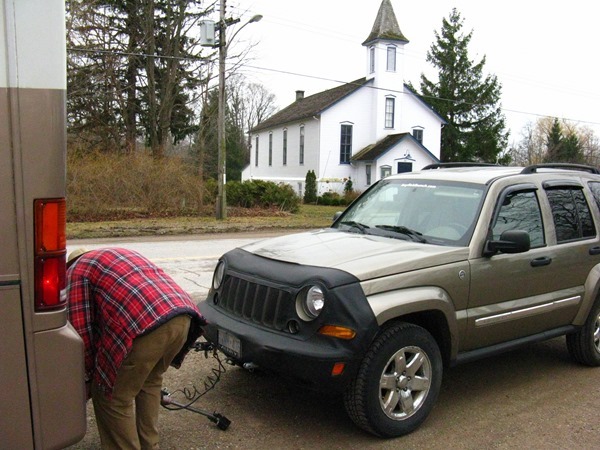 In a cold but light drizzle we spent the next hour or so unloading about a third of the rig.  The rest of the stuff can wait for nicer weather.  No surprises in the house & everything like the TV & internet fired up smoothly.  It was late afternoon when I finally flopped into my big old cushy recliner with the same thought I always have after our long trek home from the South-west each year.  “That’s it I’m never leaving home again”!!!!!  Of course that feeling doesn’t last long & I know in a week or two my travel restlessness will be growing once again & won’t leave me alone until we are back on the road next October heading back to the great American South-west again.  So in the meantime Pheebs & I had better get ourselves out shortly with a coffee & a muffin to begin checking out our areas good old back roads again:)) 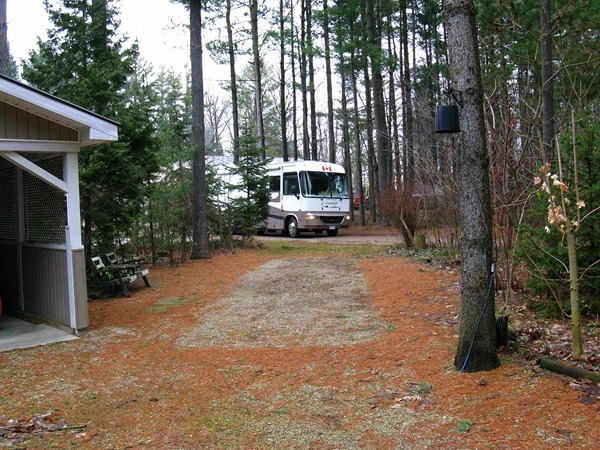 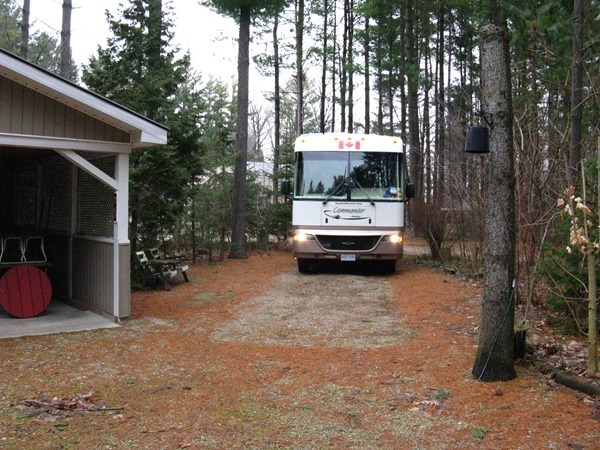 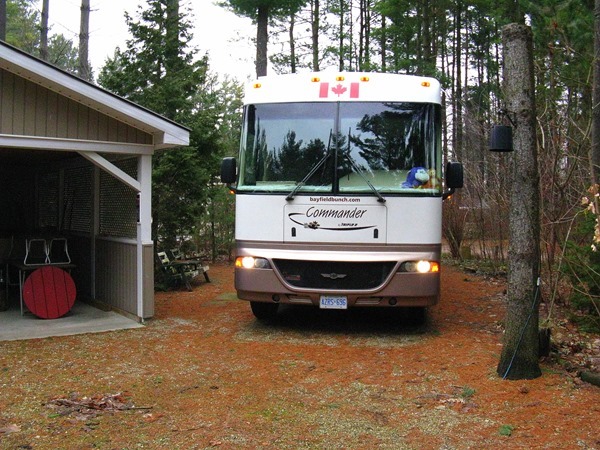 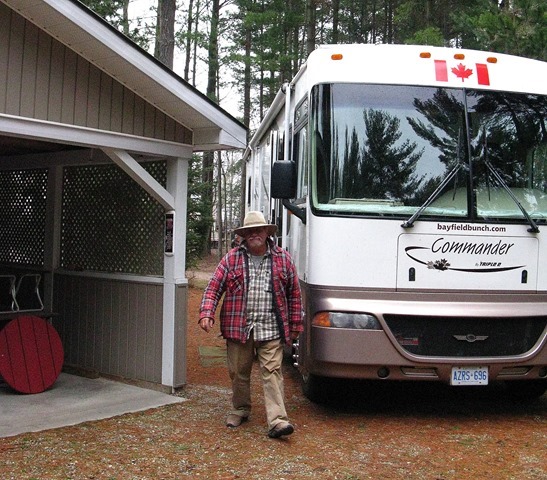 NICE TO FINALLY BE HOME:))

GROANER’S CORNER:((    Shooting the breeze down at the Veteran's hospital, a trio of old timers ran out of tales of their own heroic exploits and started bragging about their ancestors. "My great grandfather, at age 13," one declared proudly, "was a drummer boy at Shiloh."  "Mine," boasted another, "went down with Custer at the Battle of Little Big Horn."  "I'm the only soldier in my family," confessed vet number three, "but if my great grandfather was living today he'd be the most famous man in the world."  "What'd he do?" his friends wanted to know.  "Nothing much. But he would be 165 years old."