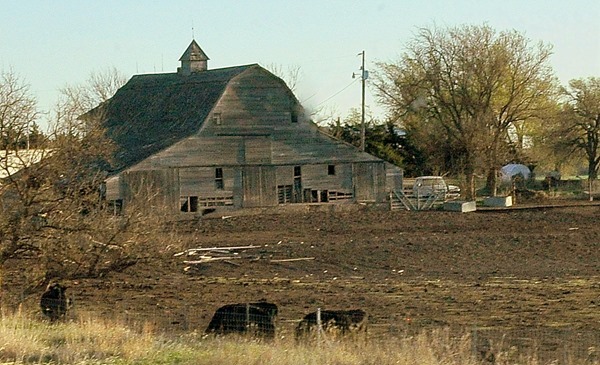 A FEW MORE PHOTOS FROM THE DRIVER’S SEAT TODAY
Despite a few close by train whistles & the usual sounds of a Walmart parking lot we slept reasonably well considering.  Long travel days do have a habit of making tired travelers sleep well.

ALWAYS NICE TO SEE WATER & OOPS LOOKS LIKE I MISSED A FEW SPOTS WHEN I HASTILY CLEANED THE WINDSHIELD SUNDAY
A strong icy wind blowing from the south made for a short doggy walk on the long grassy strip beside our rig this morning.  By 7:25 Hutchinson Kansas time we had the big wheels rolling & minutes later were eastbound on highway 61 making tracks in a heavy crosswind for highway 81 at the town of McPherson about 10 miles away.  I knew soon as we reached that highway we would have that wind on our tail & it would be to our advantage & push us all the way up to York Nebraska on I-80.  I also knew that later in the day when we reached I-80 & turned east we were going to be in a big fight when our helping tail wind would suddenly turn into a very nasty crosswind.  And did it ever……….. 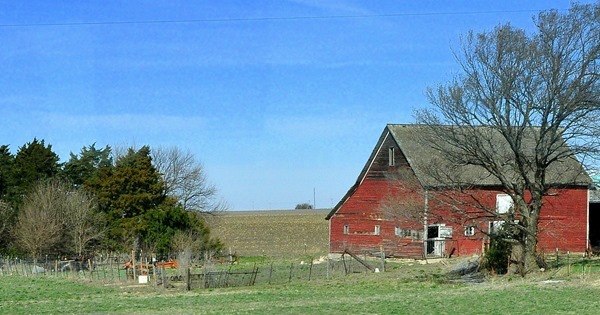 From McPherson Kansas north up highway 81 with the wind at our backs we had us a mighty fine morning drive.  Sunny skies with a great 4 lane highway & very lite traffic.  Blew past Salina Kansas & continued heading north.  I sure would recommend this north/south route to anyone. 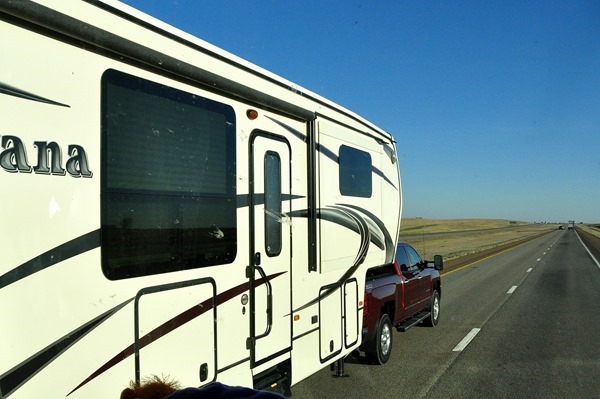 GUESS WE’RE NOT THE ONLY SNOW BIRDS HEADING HOME
Our first destination was a place called Concordia because we knew of nice park there where we could pull in & pick us up some water.  I call this place ‘Army Tank’ park because there is a neat army tank & a mobile gun carrier here.  We have overnighted in this great park maybe half a dozen times now over the years when passing through this way.  About a dozen  sites here with concrete pads, water, electric, & a dump station.  Lots of grass & trees & oodles of space for doggies & people to run if your so inclined to run.  There is even a small local airport here & a big cement tornado shelter if I remember correctly.  And here’s another big plus, there is a big Walmart right across the road.  This ‘Airpark’ is located at Concordia’s south end right on highway 81 at the only traffic light on that side of town.  Walmart is on the west side & the Airpark (Army Tank Park) across the highway is on the east side.  I totally recommend this  park for any RV’ers traveling through this area.  From Tucumcari New Mexico on I-40 to York Nebraska on I-80 it’s 590 miles & pretty much a straight shot all the way. 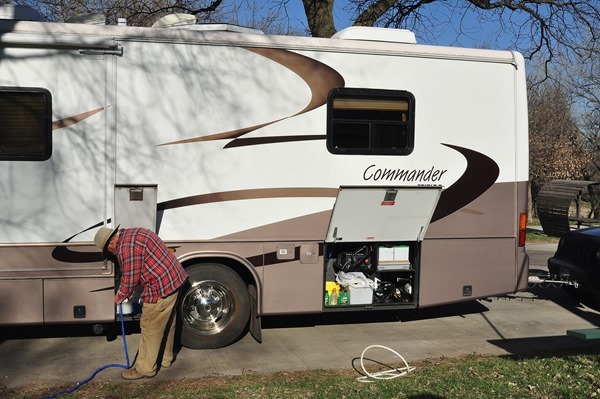 TAKING ON A BIT OF WATER 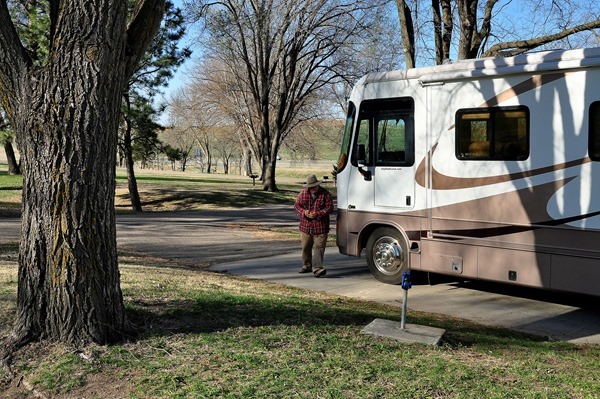 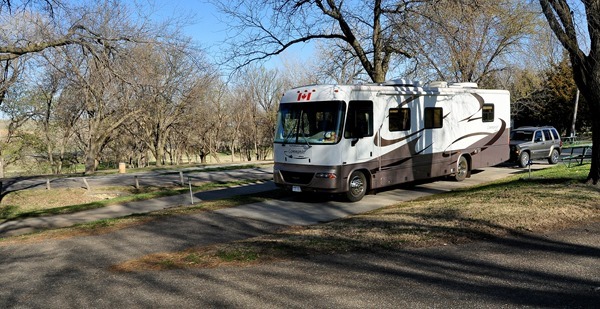 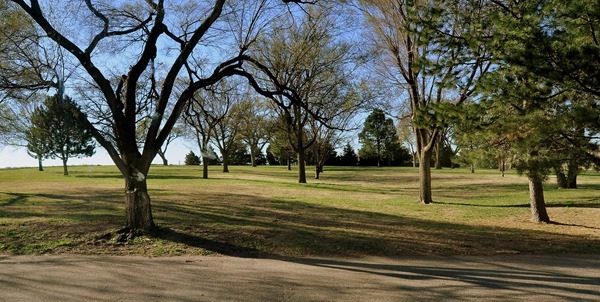 From ‘Army Tank’ park we continued rolling north until we reached York Nebraska at the i-80 junction.   Picked up some gas here then climbed aboard the Interstate heading east.  From this point to Casey Iowa our pleasant drive was over & we fought a strong crosswind every inch of the way.  The Big EEE sure earned her due today bucking heavy winds through rolling hill country up & over countless grades.  Again the rig ran perfectly without so much as a hick-up along the way.  Stopped into a Love’s Truck Stop & topped up our propane tank along the way as well.  Needing a break we rolled off i-80 in Lincoln Nebraska to a spot we had overnighted on our way home last year.  CRACKER BARREL:))  Had the daily special of chicken, dressing, & mashed potatoes with gravy.  Yes indeed we sure do like our Cracker Barrels we do.  And here’s the best part, we rarely finish all the food so have Cracker Barrel left overs for supper just as we did tonight. 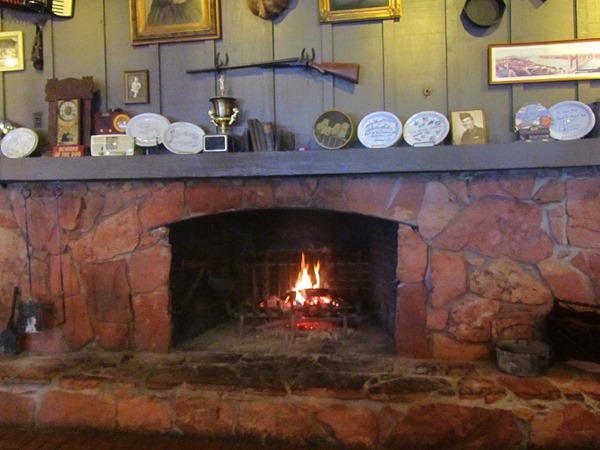 ALWAYS A NICE DOWN HOME FEELING TO CRACKER BARREL 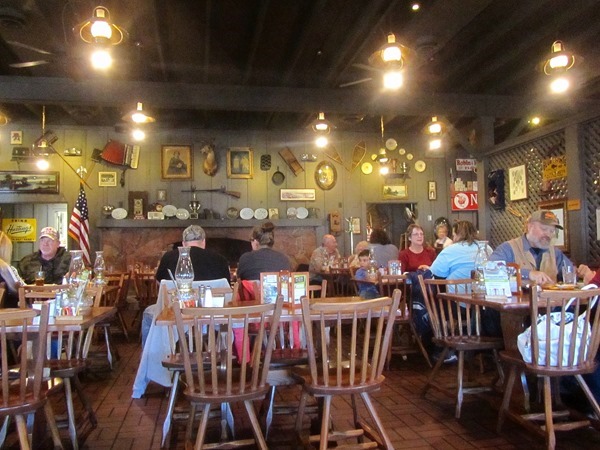 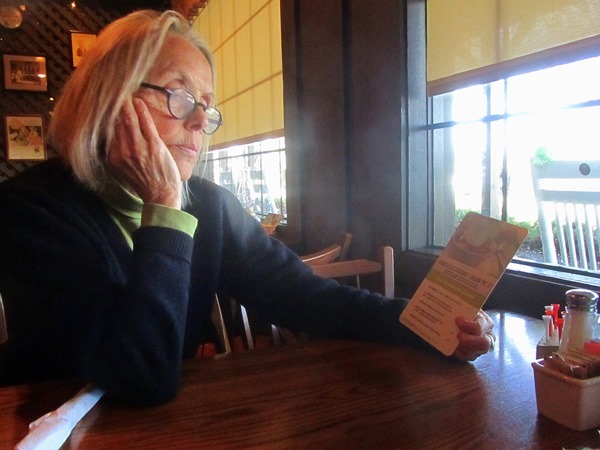 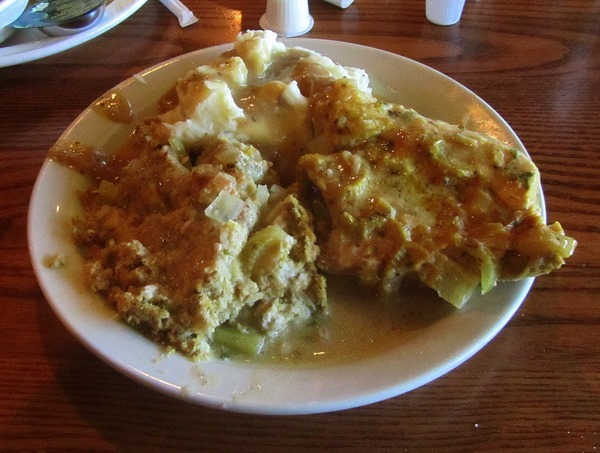 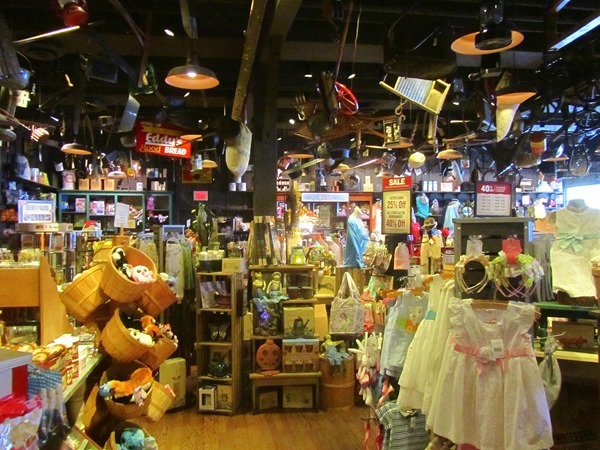 SAW THESE GUYS BEHIND CRACKER BARREL
Wished there was an easy way to scoot by the line of big cities ahead of us but after spending some time with my Atlas again Sunday night I figured we’d just bite the bullet again & plow our way straight through them as we usually do.  Timing is important though as one does not want to get into any kind of morning or afternoon rush hour traffic.  That stuff is not nice no matter what big city one finds themselves in.  Cities are best traversed between 9 a.m. & 3 p.m. if possible…..or  7 p.m. to 5 a.m. for best results:)) 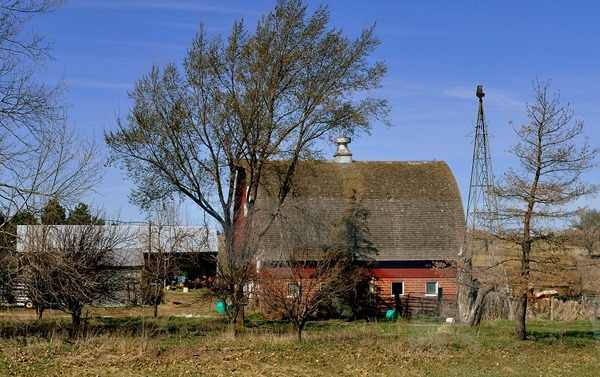 AT LEAST PHOTOS TAKEN OUT MY SIDE WINDOW DON’T HAVE BUG SPLOTCHES ON THEM
Ahead of us we had 4 big city Monsters to deal with so off we headed to do battle today with the first of 4, Omaha Nebraska.  Winds beat us up real good all the way but the driver side of me saw it as a challenge with a healthy twinge of apprehensive excitement.  We rolled into Omaha’s western outskirts around 2 p.m. & fought our way through the traffic madness & construction zones.  Already tired from fighting with the crosswinds I was sure glad to see Omaha disappearing in my side view mirror.

About 50 miles west of Des Moines Iowa Kelly using her old ‘Escapee Day’s End’ directory found a county park ahead in a little town on the north side of I-80 called Casey Iowa.  Just in time too because I was really beginning to tire.  We also did not want to do Des Moines in the afternoon traffic rush so we’ll roll out of Casey in the morning & slide straight through Des Moines on the tail end of the rush.  Des Moines is the easiest of the 4 big city Monsters to get through.  I expect we’ll probably do Davenport tomorrow as well then hole up somewhere west of Chicago & plan out our strategy on just how we are again going to up & defeat that biggest of Monster sometime probably Wednesday.  We have tangled with Chicago about a dozen times over the years & made it through unscathed except for one year when it totally ate us up & spit us out. 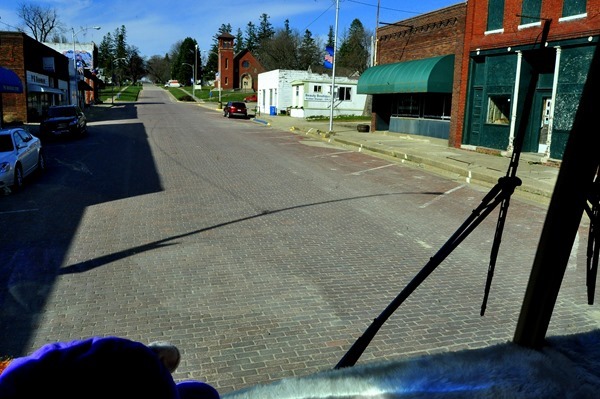 CASEY’S SHORT MAIN STREET WAS MADE OF BRICKS YEARS AGO & THAT BRICK STREET STILL SURVIVES INTACT TO THIS VERY DAY
Oh, & here’s a juicy little tidbit about the wee town of Casey we are staying in tonight.  Found this on the internet…….{In 2015 the City Clerk, Dorothy Dillinger, was indicted for misappropriation of city funds and burning down the city hall. She allegedly stole up to $300,000 in city funds and spent it on purchases at Victoria's Secret, Wal-Mart, among other places}

I have found over the past 4 days of travel my mind has not been drifting back to our Congress house or the South-west in general.  As expected it has scaled down to one day at a time & focused on the task at hand which at the moment is our homeward trek.  Our goal is simply to get ourselves back home to Bayfield Ontario.  One of the most enjoyable things about being a Snow Bird is having a home to come home to after a long journey & months away.  Lots of space, long hot showers, cushy recliners, & big screen TV etc barely scratches the surface of our many great reasons to be home.  Pheebs is already looking forward to our first Jeep ride through Huron Counties Spring time rural countryside:))))))) 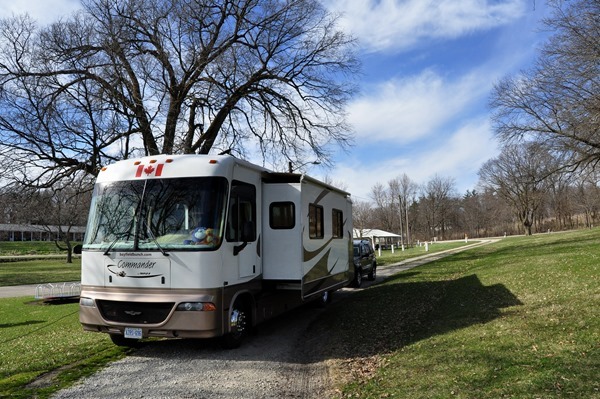 Traveling across Kansas this morning our thoughts turned to RETIRED ROD as we wondered aloud how he was making out with his surgery today.  Has anyone heard anything yet?? 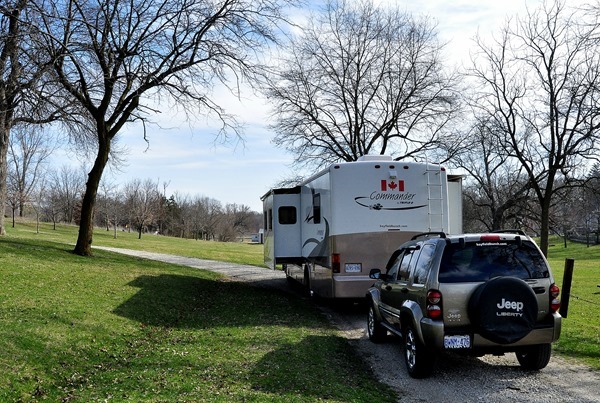 DESPITE LOOKING COLD WE ARE ACTUALLY IN SOME MODERATELY MILD TEMPERATURES HERE IN CASEY IOWA
GROANER’S CORNER:(( A fire started in the grasslands close to a farm. The county fire department rushed to the scene, but the fire was more than they could handle. Someone suggested calling the volunteer fire department. Despite some doubt that they would be of any assistance, they were called.  The volunteers arrived in a dilapidated old fire truck. They rumbled right past the other firefighters straight towards the fire, drove right into the middle of the flames and stopped!! The firefighters jumped from the truck and frantically started spraying water in all directions. Soon they had snuffed out the whole fire.  As the farmer watched all this, he was impressed and grateful that his house and farm had been spared. He quickly got his cheque book and donated $1000 to the volunteer fire department.  A local news reporter asked the volunteer fire captain how they planned to use the funds.  The captain replied, "The first thing we're gonna do is get the damn brakes on our fire truck fixed"!!!!
Posted by Al Bossence at 3/21/2016