FORGETFUL ME FORGOT MY CHANGE AGAIN:(( 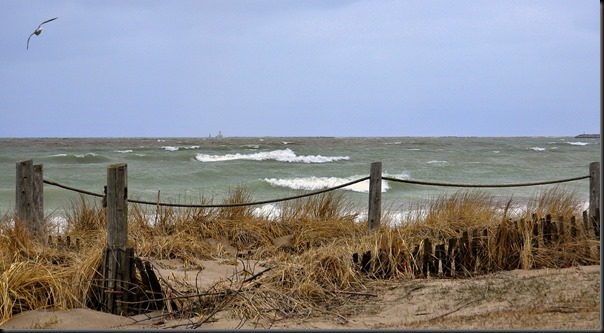 I was a bit reluctant to peek out our window this morning but when I did I was happy to see the rains had finally stopped & there was no snow accumulation or hard coatings of ice on everything just a light smattering of corn snow here & there.  Could hear wind in the tops of our pine trees again. 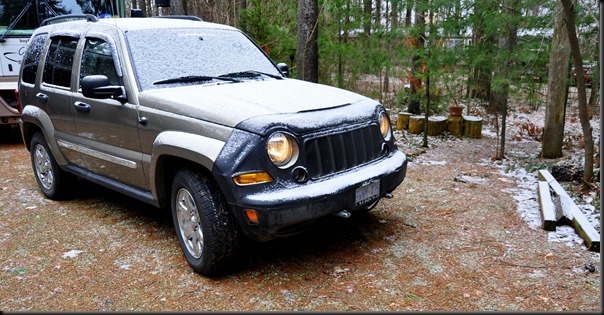 Despite colder weather around us it sure is nice being back in a house with a real furnace with duct work carrying warm air to every room.  Our Congress house doesn't have a furnace & when there in cool weather we rely on electric heaters to keep us warm.  We much prefer a furnace carrying heat to every room. 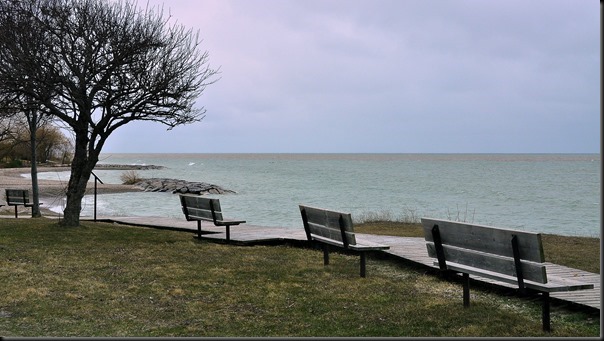 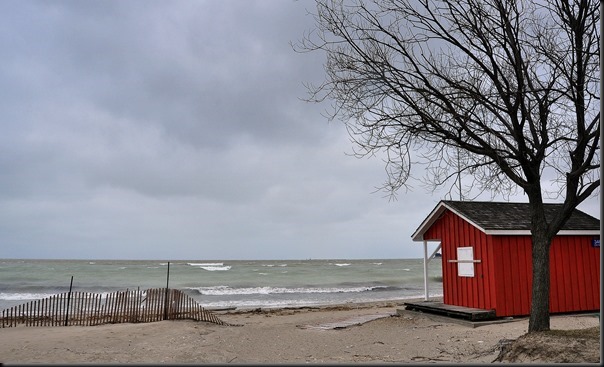 After being towed behind the Motorhome for over 5 days & with temps around the freezing mark the past couple nights I figured Pheebs & I had better take Libby out for a short run to charge her battery up.  I didn’t have to convince Pheebs to go so with that thought in mind we headed ourselves on over to Goderich.  Seeing how it was 'Good Friday' it seemed like Pheebs & I were the last 2 characters left on the Planet after some kind of cataclysmic happening.  Never encountered one car all the to Goderich & even Goderich itself was akin to a ghost town.  I was almost in a state of alarm thinking Tim Hortons might not be open so imagine my relief when I entered Goderich's east end & saw the proverbial vehicle line-up at 'Timmies' drive-thru.  Recognizing the place Pheebs proceeded to fly around upside down in the Jeep as I squawked into the mike, "small coffee with cream & a carrot muffin please".  Had been the best part of 5 months since I had last uttered those words.  And speaking of Tim Hortons I have to go back tomorrow morning.  In one of my classic moves I gave the drive-thru guy at the window a $10 bill, was handed my coffee & muffin then drove away forgetting the change.  Only took me 9 hours this time to remember what I had forgot…………..again!! 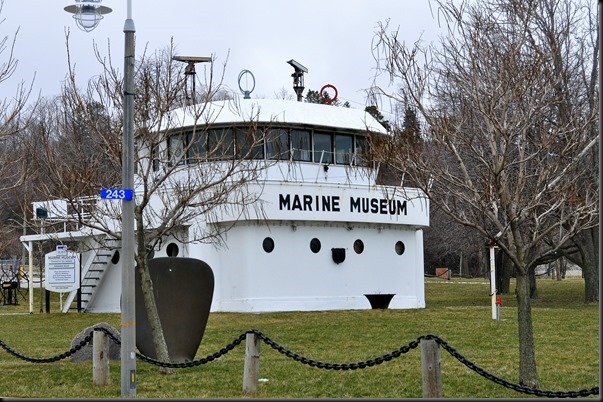 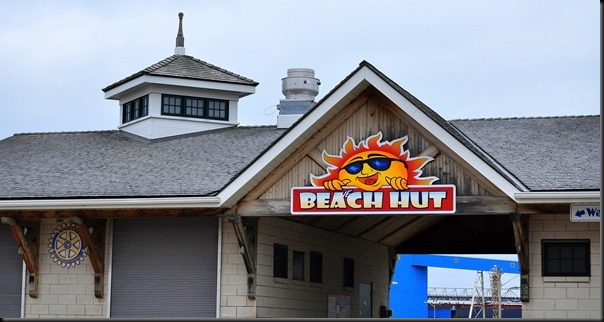 THIS WILL SOON BE A BUSY PLACE 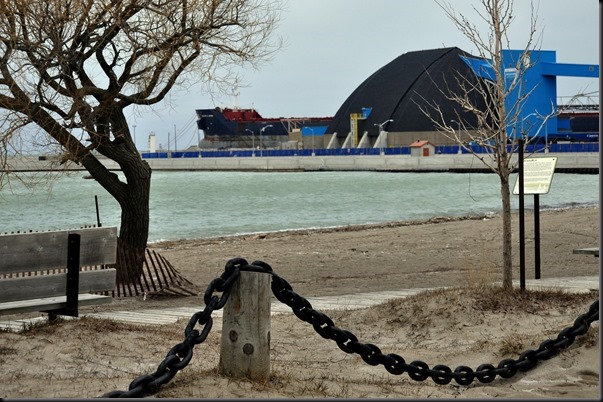 CHILDREN’S LAUGHTER WILL SOON CHASE AWAY THESE COLD GRAY DAYS

Figured we'd take us for a little spin down around the south harbor & have a look at the beach & good old Lake Huron.  Not too much had changed since the last there in late October last year except none of the trees had any leaves left on them.  An icy wind coming in off the lake kept us in the Jeep so all of today's photos were again taken from Libby's drivers seat.  Heavily overcast skies gave the morning an overall gray moody feeling.  Very little activity anywhere except a few flocks of Sea Gulls hanging on the westerly winds. I was curious to see how the Inuksuk's along the beach had faired over the winter & was heartened to see they were still mainly intact.  With winter gales being relatively light the Inuksuk's were spared from Lake Huron's long icy fingers snatching at their very being & knocking them asunder. 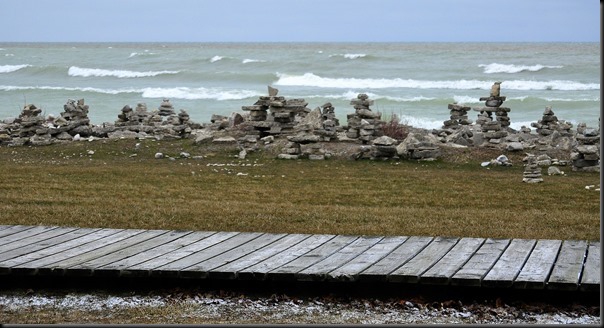 A stop at a south end gas bar filled up Libby's tank once again & had Pheebs spending some very anxious moments.  Soon as we pulled into the large mall parking lot & headed for the gas bar she recognized the place right away & began going bonkers because she remembered the gas attendant always gives her a treat here.  Oh-Oh, new person on the job this morning & there was no 'doggy treat' forthcoming.  Well not at first anyway & Pheebs seemed quite put out about that jumping from window to window watching the attendant like a Hawk wondering where her treat was.  When the girl came up to the window with the credit card machine Pheebs was standing on my lap right in her face staring her down.  Luckily this Gal was a doggy person & hastily headed back inside to get Pheebs her doggy treat.  Whewwwww, close call there but we soon departed with smiling faces all round:)) 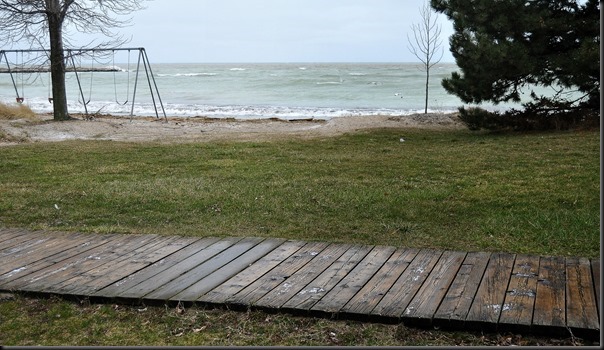 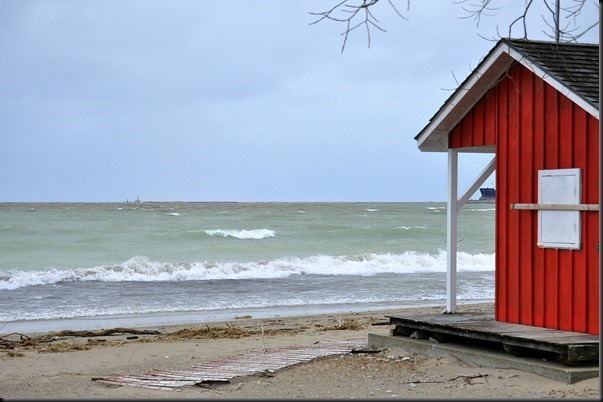 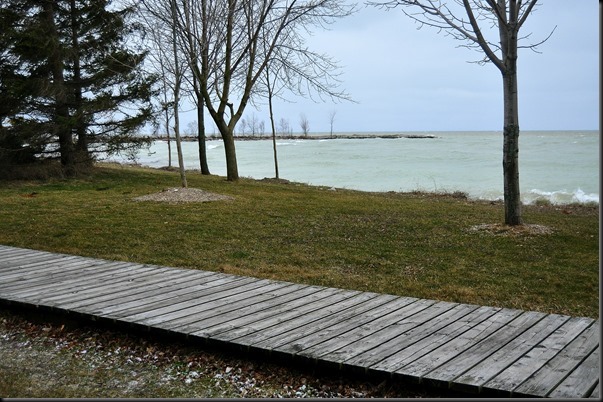 Arriving home a short time later we headed back inside the warm house & intended on staying there for the rest of the day.  Without a nice blast of  warm 'feeling good sunshine' to charge my batteries I was low on energy with little enthusiasm for getting anything done outside.  However it only took one little dribble of sunshine at precisely 2:36 this afternoon to roust me out of my recliner & head me back outside.  With leaf rake in hand my 2016 big Spring clean-up was underway.   Also unloaded a bunch of stuff from 2 of the Motorhomes 6 bins & couldn't help but notice how great it felt to once again be outside doing something not only useful but physically enjoyable as well.  In fact I enjoyed it so much I was outside again after supper raking up yet more piles of damp pine needles:))

A COUPLE OF LAKE FREIGHTERS IN THE HARBOR

With sunshine forecast for Saturday I'm thinking Pheebs & will get us our first little country road Jeep ride of the season & resume the yard clean-up when we return.  Well that's what I figure anyway. 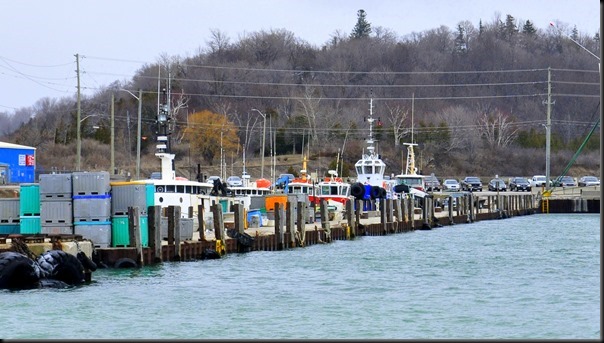 Now here's a funny little thing that happened when I decided to work on our trip numbers a couple days ago.  Reached into a drawer for a small solar calculator.  The calculator had been in that dark drawer for the past 6 months so no numbers came up when I pressed the number buttons.  Thought to myself 'oh well I'll wait until tomorrow & set the calculator in a window to charge itself up again'.  Then I thought, wait a minute, I spent a lot of time in school well over 60 years ago programming my own onboard computer & it's quite capable & sometimes still able to work whether it's light out or not.  In fact my own computer which travels with me everywhere I go is incased in a hard shell in total darkness anyway.  Well except for maybe a couple points of light on the front panel.  Grabbed me a pencil & a piece of paper, dusted a few cob webs out of the way & punched the 'on' button.   Thought I heard a few start-up whirring sounds in my head & perhaps sensed a few old tired neurons firing through a few rusty brain cells.  With our trip figures in front of me I took my pencil in hand &  proceeded to  my cranium brand computers boost button & the whirring increased to the point my hand & fingers began moving & in fact began jotting numbers down.  Let me see now, add this, carry that number over there, double that number & subtract another number somewhere else.  Yes, yes, now it's all coming back now from Miss Rudy's grade 6 class at the Tavistock Public School oh those so many years ago.  In less than a minute I actually had the numbers I was looking for.  Maybe not exactly the right numbers but by golly I had some numbers anyway & I didn't even have to use the solar calculator to get them either.  Now let me see, where's that NASA rocket scientist application form I had laying around here.  Aw yes there it is………….

GROANER'S CORNER:((  A woman went to the doctors office with a severe case of hiccups. She was seen by one of the new doctors, but after about 4 minutes in the examination room, she burst out, screaming as she ran down the hall. An older doctor stopped and asked her what the problem was & had her sit down and relax in another room while she explained what happened.  The older Doctor then marched back to the new Doctor and demanded, "What's the matter with you? Mrs. Terry is 63 years old, she has four grown children and seven grandchildren, and you told her she was pregnant?"  The new doctor smiled smugly as he continued to write on his clipboard.  "Cured her hiccups though, didn't it?"

- The pessimist complains about the wind; the optimist expects it to change; the realist adjusts the sails -William Arthur Ward
- The only thing better than right now will someday be the memories of right now...AL.
- It is not so much having nothing to do as it is not having the interest to do something....AL. -Tomorrows are always a great opportunity to do something different from today....AL.