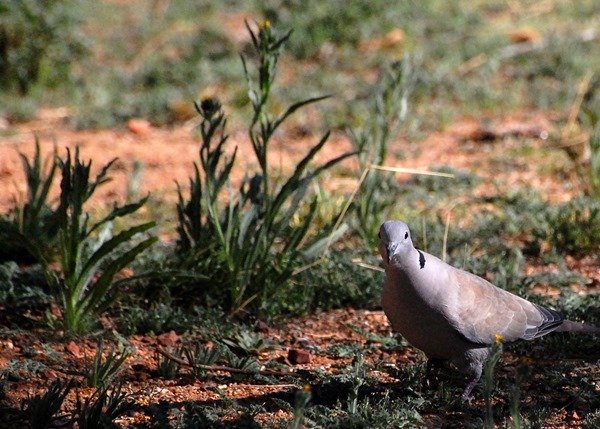 Faint odor of a Skunk first thing this morning so I checked around outside with a flashlight before letting Pheebs out.  We do think we may very well have a Skunk or two under the house & yes I did tell the prospective new owners about that a few days ago. 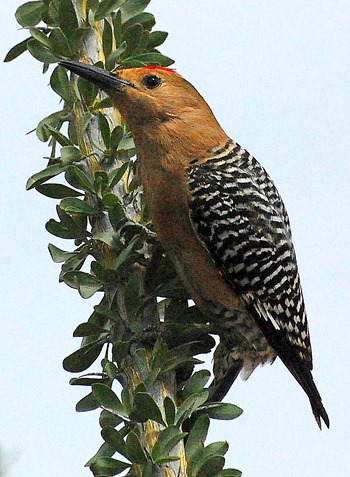 Last March after leaving Congress & heading home through Utah & Colorado we experienced problems with our Motorhome’s engine light coming on & each time it did the engine began running rough & we had to pull over & stop.  Readers wrote in with thoughts on what could be wrong & suggested possible solutions.  We did have the rig checked over twice but mechanics couldn’t seem to find the source of the problem.  Happened again coming down last fall north of Flagstaff & again a month ago coming back from Yuma.  A few days ago we received an email from one of our concerned readers saying he was in the area & would we like him to come over & have a look at the ‘Mass Air Flow Sensor’ in our rig.  Chris, a long time blog reader was one of the guys a year ago emailing us trying to help with our Motorhome problem.   Sarge had just dropped in for a chat on his way to the Post Office this morning when a gray Jeep Rubicon pulled into our front yard.  It was Chris & his wife Rosemary or was it Rosemarie…..oh-oh I could be in trouble here. 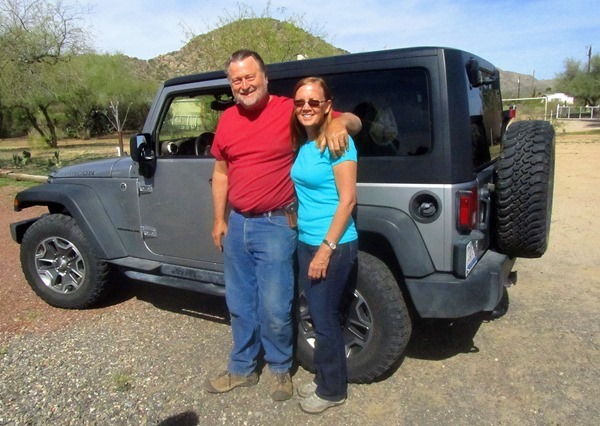 Chris is one of those mechanical do it yourselfer guys & he was suspecting a problem with our rigs mass air flow sensor because he had the same troubles with his Motorhome awhile back.  He wasn’t long in locating & pointing out the Sensor attached to the back of the air filter in alongside the passenger side front wheel.  Didn’t take him long to wiggle his way under the Motorhome’s front end & disassemble the sensor.  Seemed a bit dirty but not plugged.  Using a can of mass air flow sensor spray he cleaned it all up & reassembled it.  He also checked the air filter while he was at it & the filter was clean. 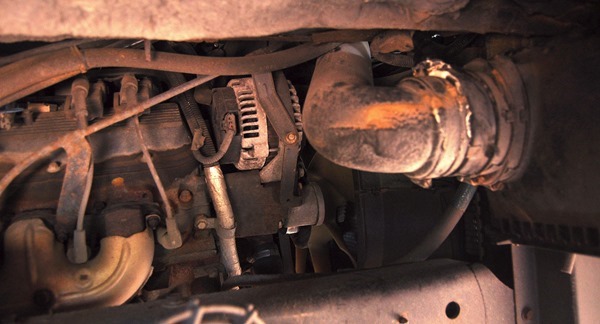 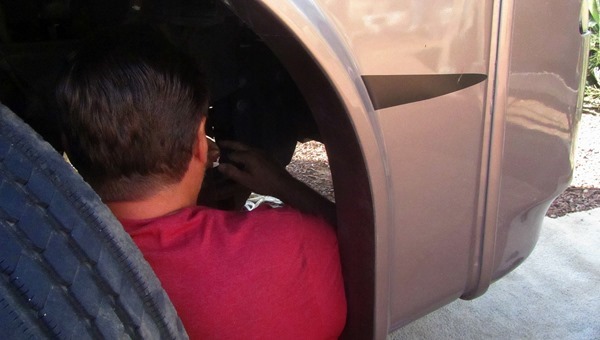 CRAMPED QUARTERS IN THERE AHEAD OF THAT FRONT WHEEL 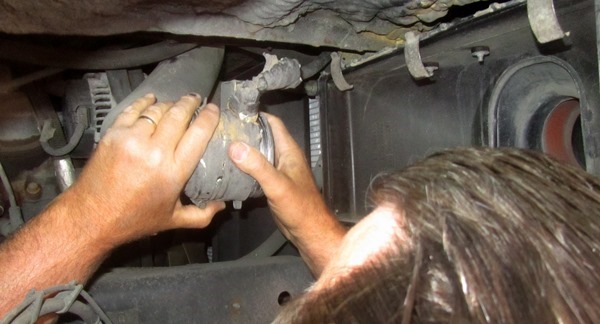 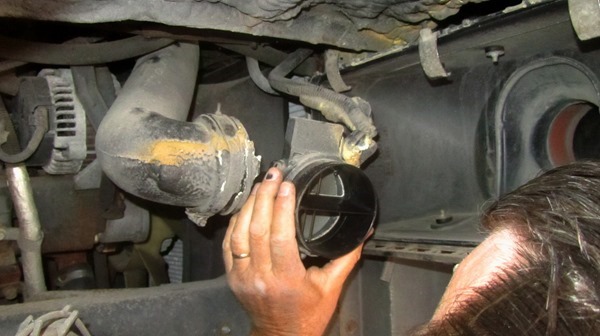 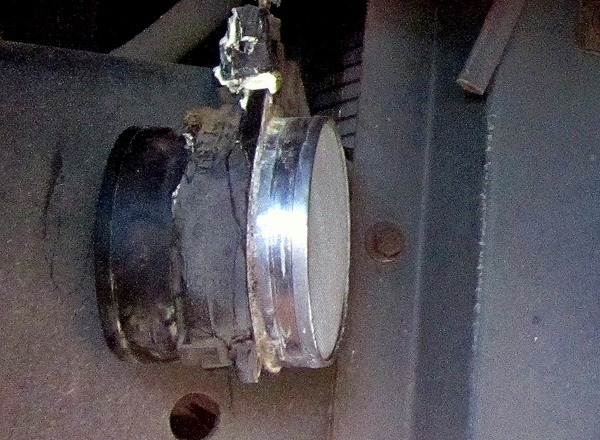 TAPING UP WIRES LEADING TO THE SENSOR 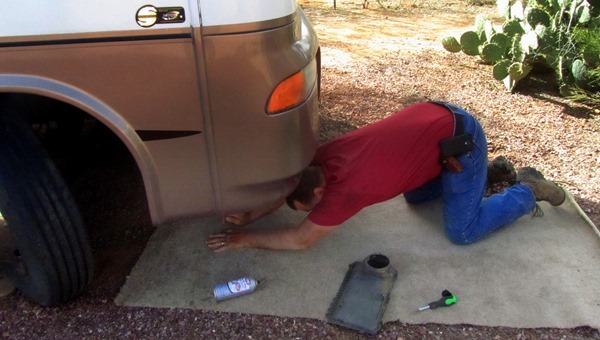 BACKING OUT FROM UNDER THE RIG

Chris read the codes with his code reader as well & cancelled out the red  engine light that had come on again a month ago.   The error code readings were exactly the same ones we always get.  Also under the rig he pointed out to me where the two O2 sensors are located on the exhaust pipes.  If the Mass Air Flow Sensor cleaning doesn’t solve the problem our next step will be to have those 02 sensors replaced.  Chris also taped up a set of wires leading into the sensor that were looking a bit sketchy as well.

Both Kelly & I thought that was so nice of him to take time out of his day to come around & do that for us this morning.  What a nice couple they were & I’m sure our paths will cross again somewhere out here in this wild & wooly South-west next winter.  They are boon-dockers like ourselves & are camped out near Vulture Peak for a few days.  Thanks for dropping around guys & doing that for us this morning.  Very much appreciated:))))) 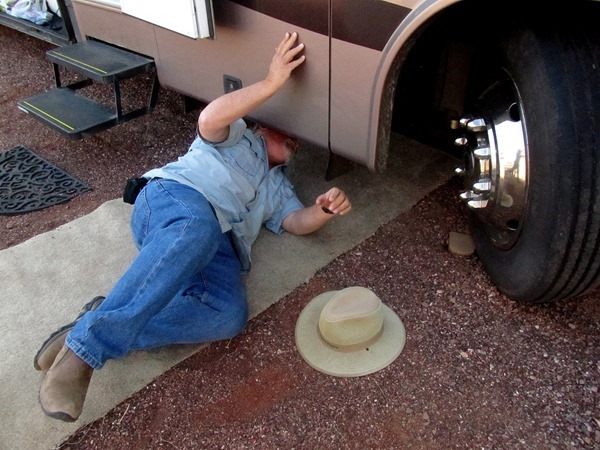 CHRIS SAID FOR ME TO CRAWL UNDER THE RIG & I WAS HOPING i WOULDN’T HAVE ANY VERTIGO PROBLEMS…AND I DIDN’T:)) 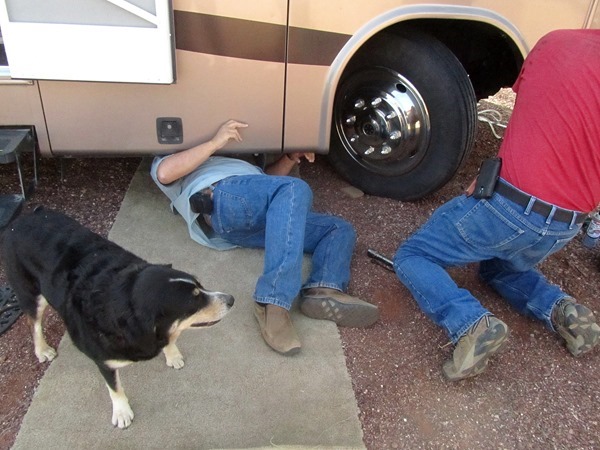 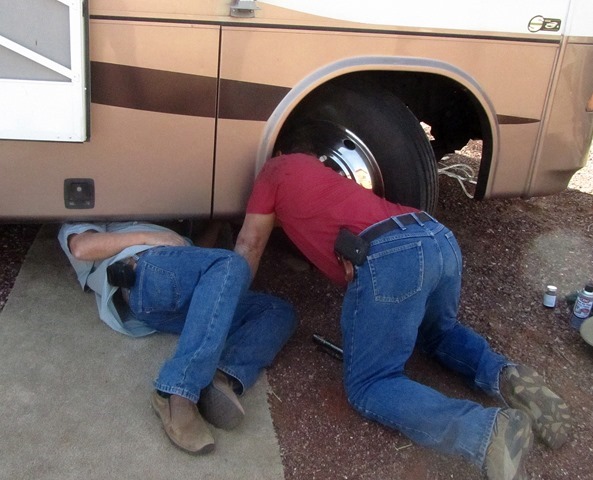 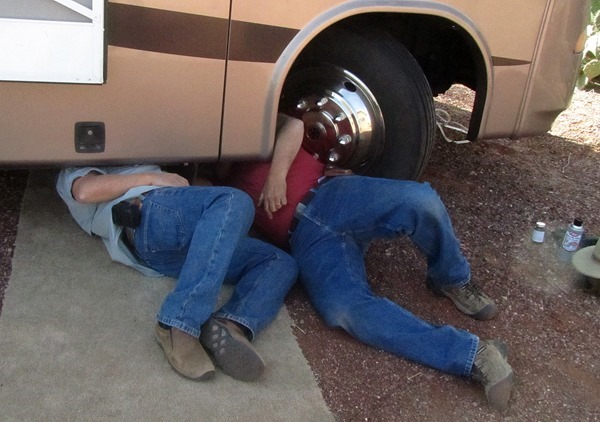 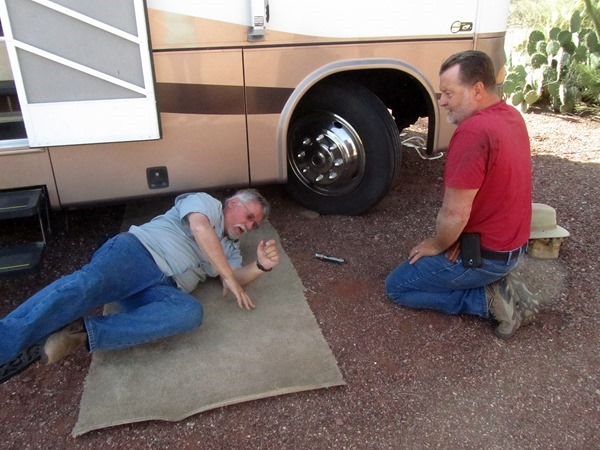 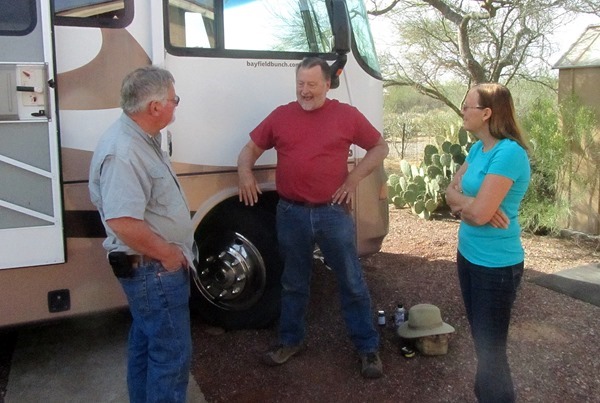 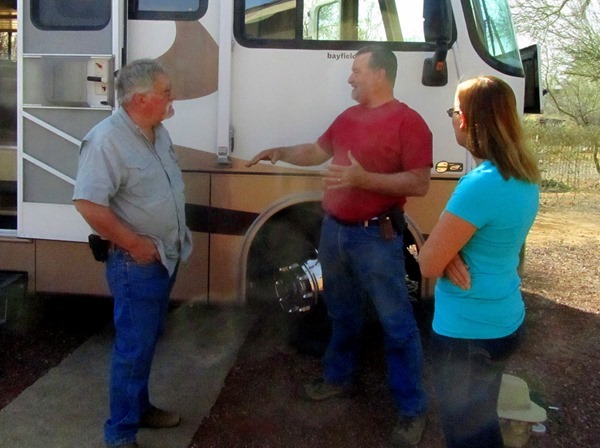 Don’t even ask me if we watched all that Super Tuesday political hoopla on TV last night because I’m not going to admit we did.  Not what I would call time well spent but there we were watching it anyway.  Nuff said about that!!

Thanks to the Guest in my posts Shout-Box for tracking down our marriage date.  Must have used a key word or two in our ‘Search’ bar.  Neither Kelly or I had thought of doing that.  The form at the Title Company Tuesday morning that asked for our marriage date had to do with the IRS regarding tax.  Another Shout-Box Guest wondered where we got married so here’s the story.  Long time readers know Kelly & I are not big ‘people’ people & our wedding day was very typical of our lifestyle.  We never told anybody about our getting married, not even closest friends or family.  At the time I was looking after the grounds on an estate outside of St. Marys Ontario owned by Shakespearian Actress Pat Galloway & her husband Bernhard.  Just the nicest older couple.  It was May of 2002 when Kelly I decided on getting married.  Pat & Bernhard were still at their Villa in Spain so we decided to get married in their back yard near St. Marys.  For best man & bridesmaid we asked an elderly couple we knew living near Pat & Bernhards & they were happy to come over & do that for us.  Found us one of those Minister fellas in St. Marys & he drove the few miles out of town to marry us in Pat & Bernhard’s back yard under an arched trellis.  Only 5 of us there & I think it was a Saturday which I remember as being cloudy, cold, & windy.  I think from the time we all met to the time everybody was on their way back home again was well less than an hour.  No fuss, no muss, no bother & we still prefer keeping our lives that way to this very day.  Well, with the exception of Mr. Blabberfinger’s ‘tell all’ blog that is………………. 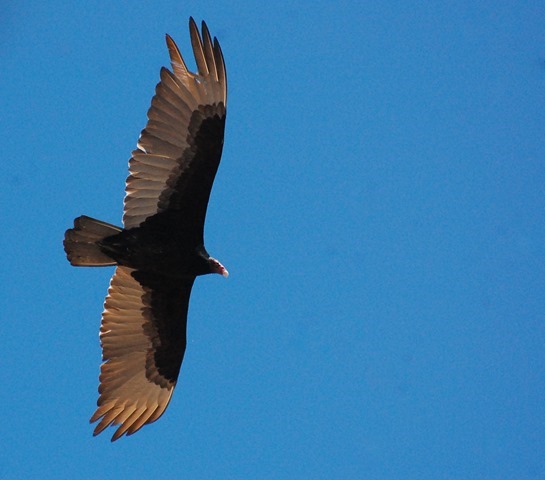 Turned out to be a hot one today & we had fans running.  Hotter on Thursday.  Pheebs & I will be out the door early in the cool morning air for a relaxing Jeep ride.  Last time we were out I think was last Saturday & we’re both showing signs of withdrawal so we had better get some fresh air blowing through the windows right quick.  We are in desperate need of some outdoor scenery. 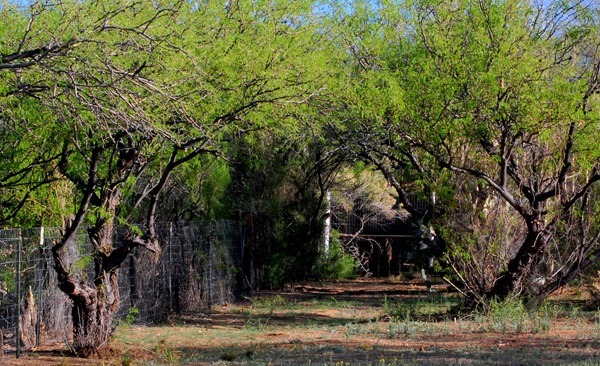 SO NICE TO SEE OUR BACKYARD MESQUITE TREES FINALLY GREENING UP

I think Kelly & I both have a wee case of mental exhaustion with so many things going on at the moment.  Kelly was especially worn out this afternoon.  We both just want the next few weeks to be over so we can turn the page & get on with the next phase of our lives.  I think you full-timers out here might understand that if you thought back to the time you sold your house & had all those things to do before you closed the door for the last time, hopped into your rig, & headed on down the road……………… 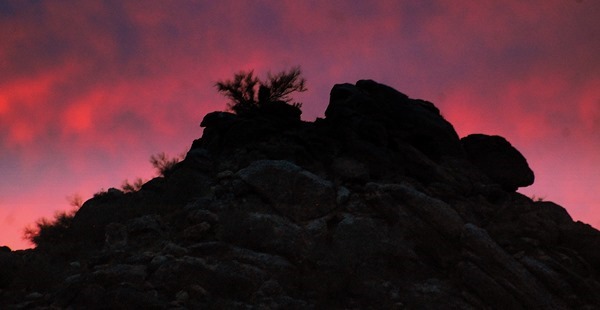 GROANER’S CORNER:(( A Senator is in a restaurant and the waiter brings over the rolls, but no butter. "May I have some butter, please?" The waiter gives a slight nod and wanders off. Ten minutes later, still no butter. The senator catches his eye.  "May I have some butter, Please?"  Still the vaguest of responses, and after ten more minutes, still no butter.  "Maybe you don't know who I am," says the senator. "I'm a Princeton graduate, a Rhodes scholar, an All-American basketball player who played with the New York Knicks in the pros, and I'm currently a United States senator, chairman of the International Debt Subcommittee of the Senate Finance Committee, chairman of the Water and Power Subcommittee of the Senate Energy and Natural Resources Committee, and a member of the Senate Select Intelligence Committee."  "Maybe you don't know who I am," said the waiter. "I'm the guy who's in charge of the butter".