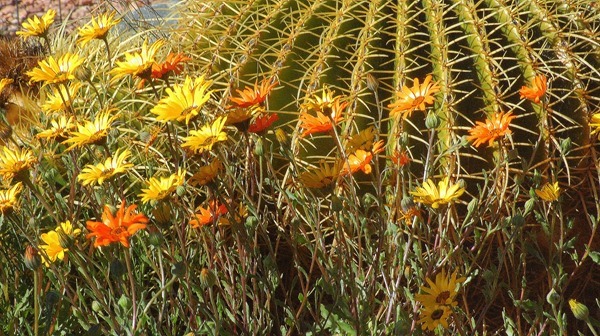 OUR NEIGHBOR’S YARD IS SHAPING UP NICE AGAIN THIS SPRING

We had no idea when we got up this morning that our house would be sold by the end of the day.  We had several offers on the table we were thinking about & one of those offers was for our full asking price but the fella had to sell his own house first.  We spent part of our morning sitting on the front porch talking things over trying to decide what to do.  We also had a possible third offer pending.   And then the phone rang. 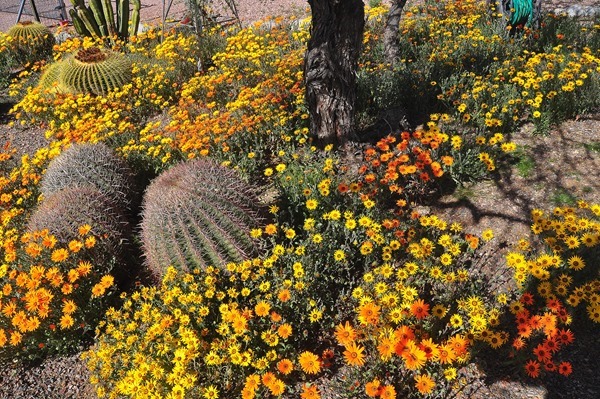 Two hours Northwest of us in an RV Park in the town of Kingman Arizona a lady in frustration sat down at her computer this morning & went to her ZILLOW Real Estate for sale site.  Fulltime RV’ers Barb & Dave had been looking for a house & property since last September.  Just like Kelly & I back in 2012 & not wanting to give up their RV they were looking for a home base in the South-west.  Frustrated with almost buying a place in Kingman they decided to scrap the deal & expand their search.  Within minutes of finding a cute little ranch style house on an acre of land in Congress Arizona Dave was on the phone talking to someone by the name of Kelly:))

Only took Barb & Dave a couple of hours to drive to Congress from Kingman & we met them around 3 this afternoon.  Of course like everyone else they liked our place right away.  Within an hour they had a good feeling about us & we had a good feeling about them.  And of course they liked Pheebe.  On a side note while standing in our yard talking to these folks we saw Ivan drive by but more about that later.  After looking our house over Barb & Dave said they wanted to have a wee look around the area so we pointed them in the direction of the Yarnell Hill & away they went.  Said they would be back & back they did come about an hour & a half later after grabbing a bite to eat at Nichols West & doing the scenic Yarnell Hill.  Sat ourselves down in our living room & 15 minutes later the deal was done & they had the house & property they saw on Zillow this morning & we had our full asking price.  (thanks to the reader who recommended Zillow a couple weeks ago)  Kelly had already filled out all the paper work from the Pioneer Title Company in case we found a buyer so we gathered around our kitchen table & the signature signings began.  A deposit was made, happy handshakes & hugs followed & off the folks went into the night headed back to their RV in Kingman.  And it was only 8 days since Kelly had put the ad in Zillow, Facebook, & Craigslist.  Barb said it was the photos she saw that really sold her on our place before they had even got here.  Kelly will head to the Pioneer Title Company first thing in the morning to get things rolling which will take about two & a half weeks to complete.  With the house being sold we now enter another new phase in the life & times of The Bayfield Bunch:)) 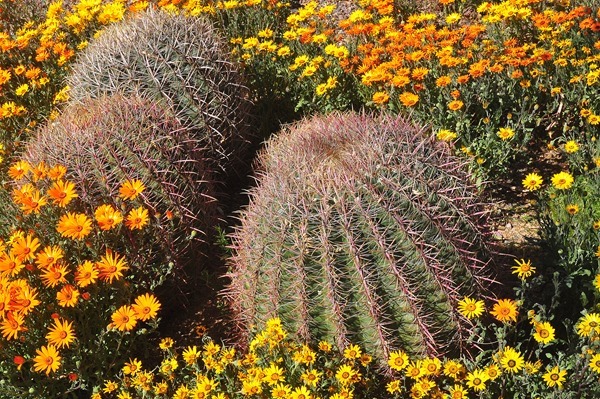 What makes this an even better deal for Kelly & I is that we know this is the right couple for our house & property.  Barb loved the outside & is the gardener in the family while Dave is the house renovator.  They already have plans for the house starting with new flooring.  When Kelly & I first walked onto this property in late February of 2012 the place was a mess as I’m sure readers will remember from all the photos I posted.  We cleaned up the property & feel we arrived here just in time to save the house with some roof repairs & stuccoing etc.  In 4 years we took the house & property as far as we could & now the new couple will take the house & property even further & we are very happy about that knowing we are leaving our little slice of South-west Shangri-la to people who care.  Of course I’ll have more to say about all this in my next few posts so until then……….zzzzzzzzzzzzzzzzzz:))))))))))

GROANER’S CORNER:(( It was late in the day when a farm boy accidentally overturned his wagon load of corn. The farmer who lived nearby heard the noise. "Hey Willis!!" the farmer yelled. "Forget your troubles & come in for supper with us then I'll help you get the wagon up."  "That's mighty nice of you, " Willis answered, "but I don't think Pa would like me to."
"Awe, come on," the farmer insisted.  "Well okay," the boy finally agreed, and added, "But Pa won't like it."  After a hearty dinner, Willis thanked his host. "I feel a lot better now, but I know Pa is going to be real upset."  "Don't be foolish!" the neighbour said with a smile. "By the way, where is your Pa?"………….."Under the wagon."