Woke up with one of those ‘don’t feel like sitting around the house’ & don’t feel like going anywhere’ feelings.  For me that’s one of the worst case scenarios for starting any kind of a day.  Kinda walked around the property for awhile swinging my right leg back & forth seeing if I could get it flexible enough to give myself a good swift kick in the pants to get me motivated.  Finally hauled off & landed me a good wallop………..then loaded up the little Spoogers & away we went. 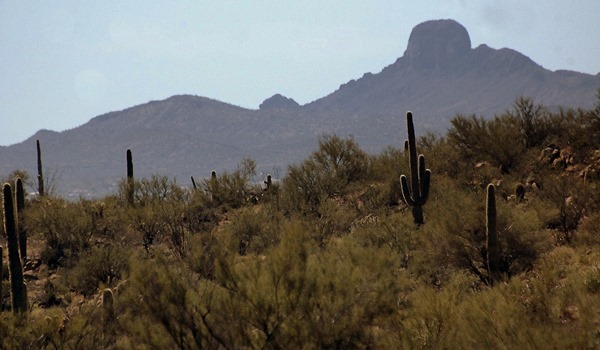 VULTURE PEAK LOOMS ON IN THE HAZY DISTANCE

Twenty minutes later we were in the drive-thru lane of Wickenburg’s McDonalds.  “Two Burritos & a coffee to go please” & with that we were on our way out Constellation Road again.  Followed our old route along Blue Tank & Rincon Road to Scenic Loop Road.  Instead of turning left & heading back to highway 93 we turned right & headed further out into the Wickenburg hills.  Had it in my head to look for the elusive back country Jeep road running between Wickenburg & Stanton.  I had looked on Google Earth awhile back & had an idea where the turn off for the Stanton Road was so off we went. 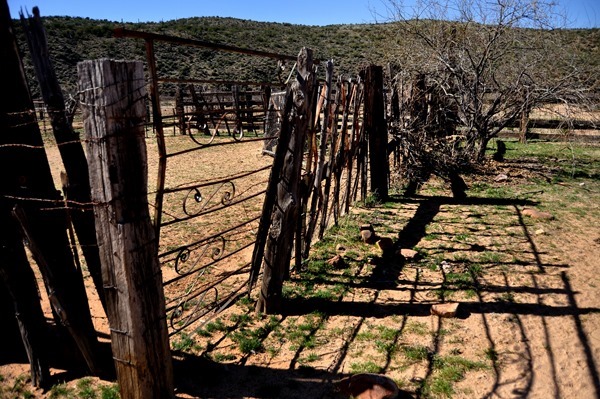 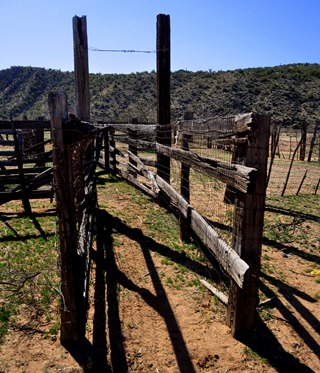 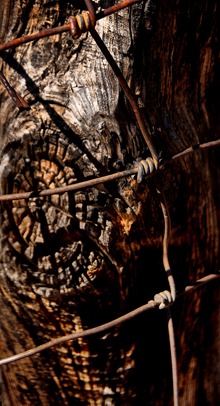 The turn off was right where Google Earth said it was so pulling Libby into 4-wheel drive I turned left into sandy wash heading north.  In a few hundred yards we climbed up out of the wash onto a hard rocky surface & began gradually climbing.  The further I went the rougher the road became with a lot of loose jumbled rocks & ruts.  About a quarter mile in I decided to turn around.  Knew Libby could handle the road fine but I didn’t want to chance it with the street tires I had on.  As I’ve said before we’ve got to get a good set of off-road tires for the Jeep before heading south again later in the year. 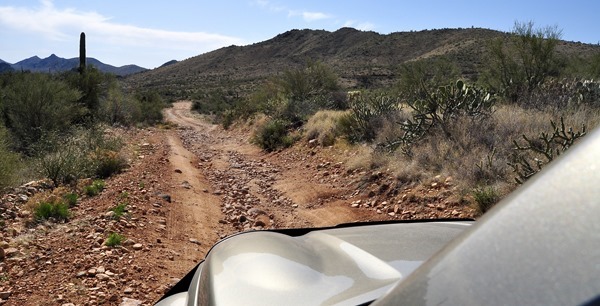 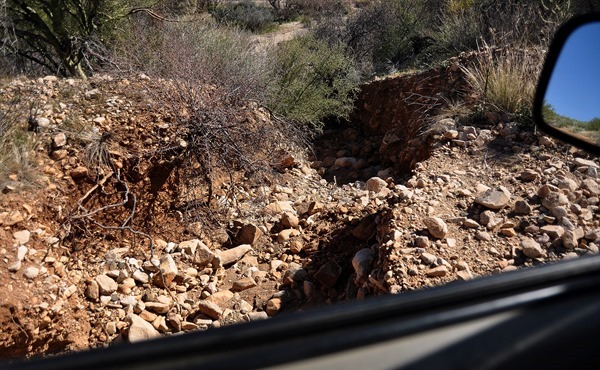 Following Scenic Loop Road further south we soon found ourselves on the upper north side of Little Box Canyon & the Narrows.  Pulled into a large flat & partly cleared area & parked the Jeep.  We were only a few hundred yards from the Narrows & although I couldn’t see them I could hear vehicles below making their way through the gorge.  Stood for a few minutes listening & was surprised by the amount of traffic until I remembered it was Saturday morning & there would be a lot of week-enders out.  Heard a string of ATV’s splashing through the Narrows & thought I heard about half a dozen 18 wheelers, 3 or 4 Greyhound buses, a couple Class A diesel Motorhomes, a Cadillac or two, a Moonbuggy, a Dunebuggy, & a Volkswagon Beetle going backwards:)) 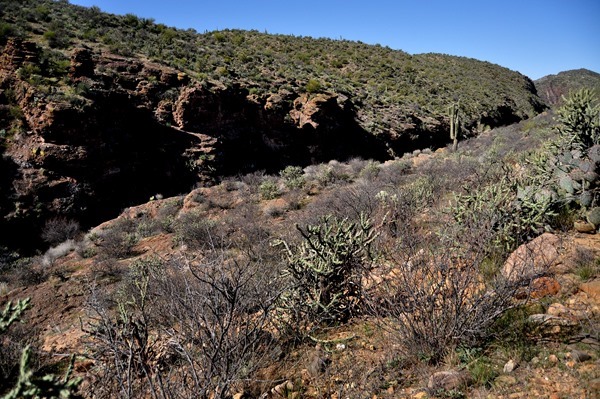 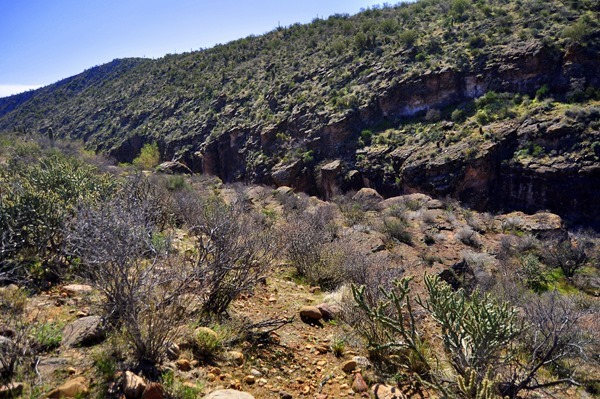 I COULD HEAR TRAFFIC NOTICES COMING UP OUT OF THAT GORGE

I was tempted to walk another 50 yards or so & peer over the edge but the sun was hot & with the type of rocky terrain leading to the rim I was concerned about Pheebe tangling with a Rattlesnake.  A few photos & we were back in the Jeep heading further south along the well maintained but very dry & dusty road.  Could see what appeared to be many, many, RV type looking vehicles all parked together in the distance.  Then I came across a sign propped up alongside the road explaining all the white trailers off to the right.  We had finally reached the ‘Boyd Ranch’. 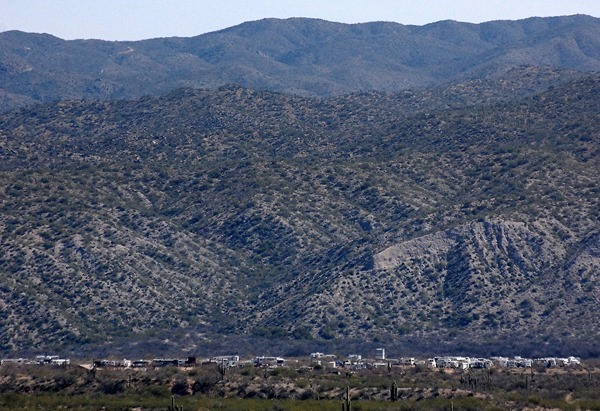 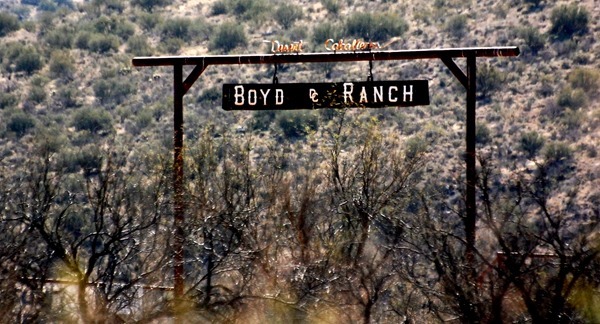 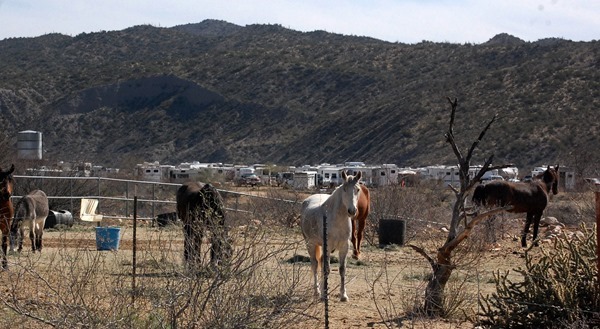 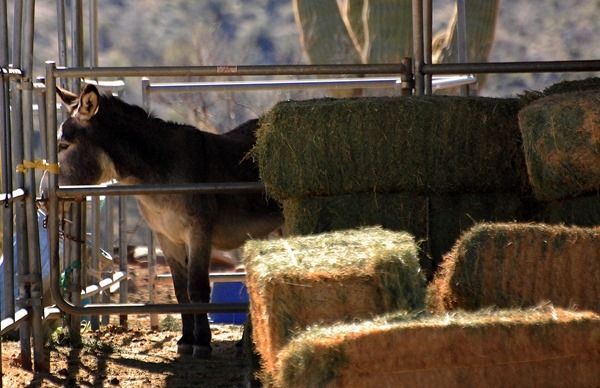 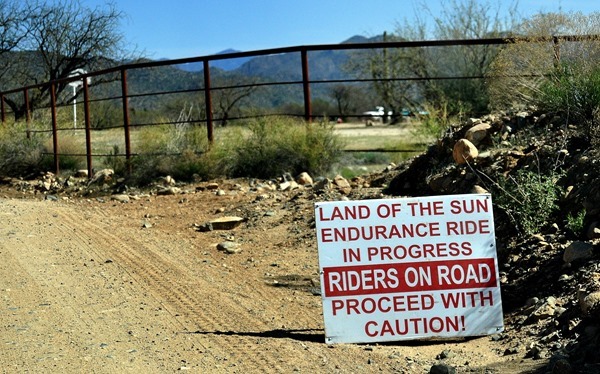 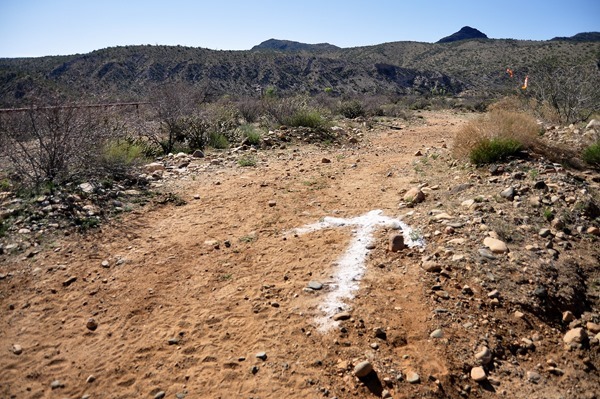 THEY CERTAINLY DO HAVE THE TRAIL WELL MARKED 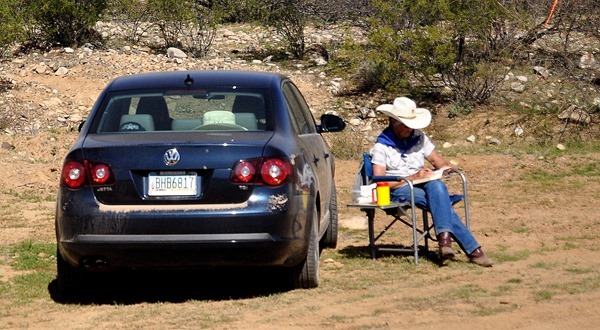 People on horseback & ATV’s milling about so figured they had some kind of an event going on for the week-end.  Maybe half a dozen events by the looks of all the horse trailers & RV’s.

It was here at the gates to the Boyd Ranch we decided to turn around & head ourselves for home.  Made another stop somewhere above Little Box Canyon but didn’t walk through the thicker vegetation to have a look down because of my concern for Rattlers again.  I’m not as concerned about myself getting bit as I am about Pheebe getting bit. 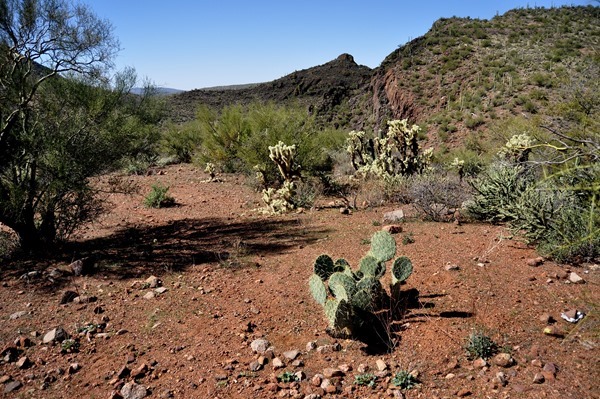 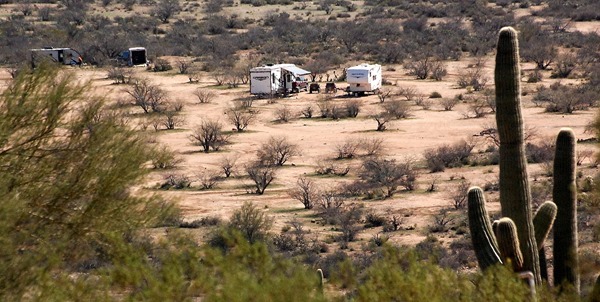 Took our time working our way back along Scenic Loop road to highway 93 stopping to take a few photos along the way.  Ten minutes after reaching the highway we were back home in Congress.  Another great outing for Pheebs & I we both loved every minute & every mile of it.  We always do:)) 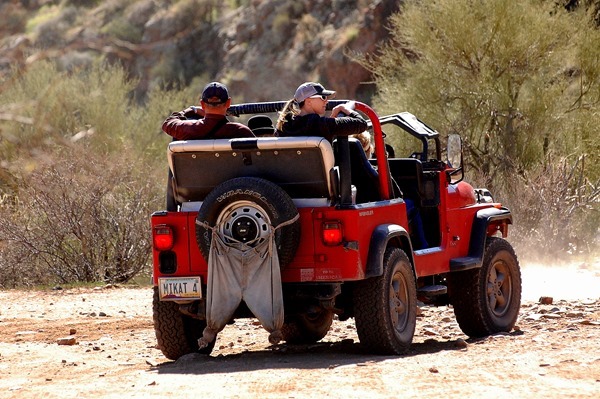 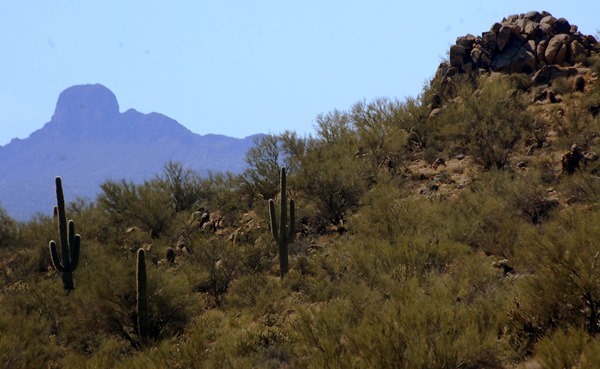 Of course you all know Mr. Blabberfingers here would be filling you in on how or how not our house deal is going but the only thing I can tell you at this point is this……………‘Kelly has wisely put a lid on me’. 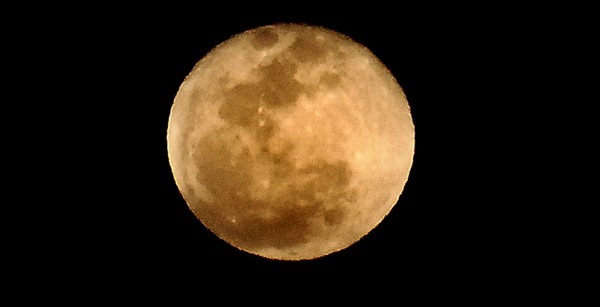 HAD FORGOT TO INCLUDE MY FULL MOON PHOTO FROM LAST WEEK

GROANER’S CORNER:(( The Pope has just finished a tour of the Napa Valley and is taking a limousine to San Francisco. Having never driven a limo, he asks the chauffeur if he can drive for a while. Since the chauffeur really doesn't have much of a choice, he climbs in the back of the limo and the Pope takes the wheel. The Pope proceeds down Silverado, and starts accelerating to see what the limo can do. He gets to about 90 MPH and suddenly he sees the red and blue lights of the highway patrol in his mirror. He pulls over and the trooper comes to his window.  The trooper, seeing who it is, says, 'Just a moment please, I need to call in.' The trooper calls in and asks for the chief. He tells the chief that he's got a REALLY important person pulled over, and asks how he should handle it.  'It's not Bill Gates again is it?' asks the chief.  'No Sir!' replies the trooper, 'This guy's more important.'
'Is it the Governor?' asks the chief.
'No! Even more important!' replies the trooper.
'Is it the PRESIDENT??? asks the chief.
'No! Even more important!' replies the trooper.
'Well WHO THE HELL is it then?' screams the chief.  'I don't know Sir.' replies the trooper, 'but whoever it is he's got the Pope as his chauffeur.'