With cold air still upon on us this morning I figured I had 2 options.  Could stay in the house watching TV or spend time reading.  Neither held much appeal for me so my restless nature won out once again & Pheebs & I were into the Jeep & off down the road we went.

Knowing Wickenburg wouldn’t be quite as cold we headed off in that direction.  At Wickenburg’s Northeast end on the corner of highway 93 & Vulture Peak Mine Road along with a gas station & convenience store there stands a Jack In The Box eatery place.  Had only ever been to one once before & that was a bunch of years ago in Yuma.  We have wintered in Congress now nearly 4 years but had never stopped into the Jack.  This morning I did.  For under $5 I got a Jumbo breakfast including coffee.  Coffee was Ok but the breakfast was nothing to write home about but I ate it all anyway.  Scrambled eggs, bacon, a hash brown & about 8 small round pancakes.  Next time back I’ll try something else. 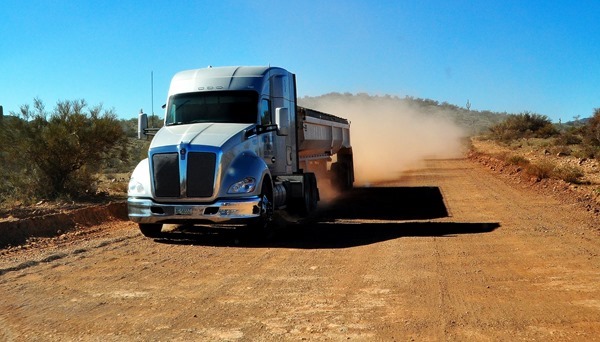 Had a pamplet in the Jeep with a few scenic places around Wickenburg so this morning Pheebs & I decided to check out a spot near Vulture Peak called Dana’s Arch.  Followed the directions out to mile marker 22 then headed off-road into the desert in a westerly direction.  The already rough road only became rougher so we didn’t go too far plus I could never have let Pheebs out of the Jeep anyway.  With the slightly higher elevation out around Vulture Peak the area is covered in Teddy Bear Chollas & it is no place for a dog or human to run free.  The Cholla barbs are about as painful as it gets!! 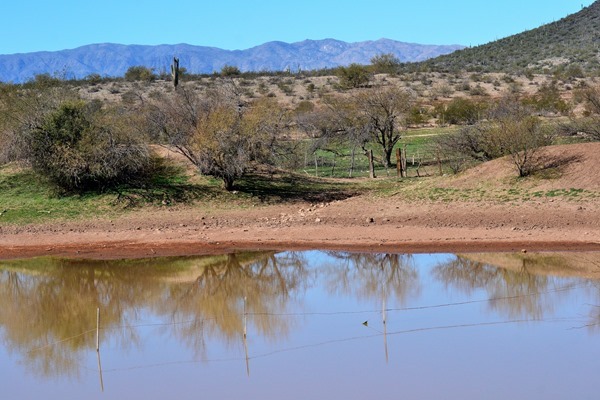 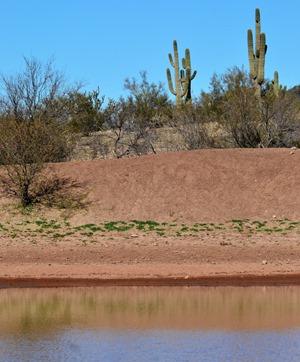 The morning was still young so we didn’t want to go home yet.  Back to Vulture Mine Road we went & turned right heading in a southerly direction.  I knew this road intersected with another road that connected Tonopah & Aguila.  Had never been across the section from the intersection to Aguila so that’s the way we headed.  About the dustiest road I’ve ever been on I think but at least it was unusually wide & well maintained. 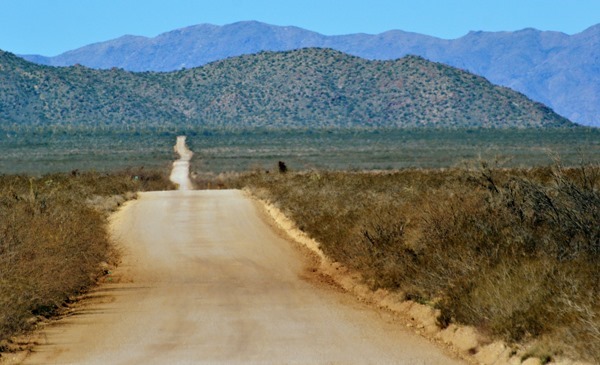 Not always signs telling one which way to go when intersecting with other desert roads & trails sometimes so one just has to use some common sense & dead reckoning.  Fortunately I have a reasonably good sense of direction plus I’ve made it a point over the years to familiarize myself with surrounding mountain tops & ridges.  And I know if I keep the sun on my left shoulder I will always ‘basicaly’ be heading in a westerly direction.  With Harquhala Mountain on the far distant horizon my goal was to come out on the right hand side of it where Aguila would be so whatever well maintained road I was on & as long as it pointed in the general direction of Harquahala’s north end & figured we should be just fine.  And we were. 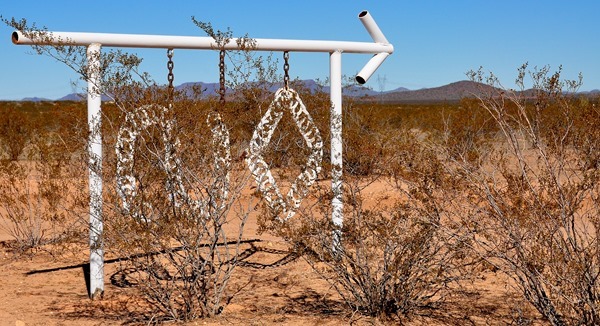 Overall it was nice drive through the desert this morning with some new scenery to boot.  Lots of Saguaros everywhere & I did notice the landscape is beginning to take on a very slight touch of green as Spring in these parts begins it’s early stage of plant growth.  A month from now things will be looking much greener everywhere as yellow grasses give way to new shoots & trees once again begin their new leafing cycle for another year.

LOOKING AT AGUILA’S EAGLE EYE FROM THE SOUTH

In 10 years we have never once been in the Southwest during the summer months to see what things look like but that’s Okay because winter here in Arizona sure looks a lot nicer than winter back in Bayfield & especially if they don’t have any snow & everything looks so dull, bleak, & dreary.  They may be having a mild winter up there but give me the scenicaly sunny Southwest during the winter months anyday………..:)) 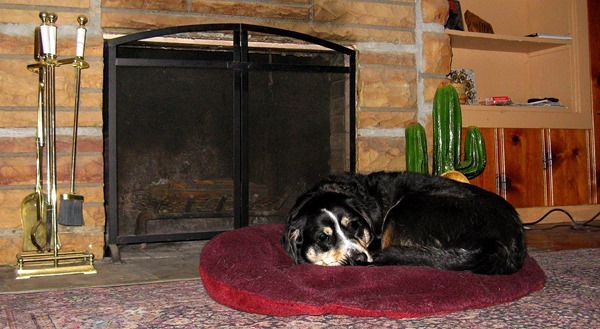 DOGGY WAS TIRED AFTER WE GOT HOME

GROANER’S CORNER:(( Every year, Smitty and his wife Martha went to the State Fair. And every year, Smitty would say, "Martha, I'd like to ride in that there airplane." And every year, Martha would reply, "I know, Smitty, but that airplane ride costs ten dollars, and ten dollars is ten dollars."  This one year Smitty and Martha went to the fair and Smitty said, "Martha, I'm 71 years old. If I don't ride that airplane this year I may never get another chance. "  Martha replied, "Smitty, that there airplane ride costs ten dollars, and ten dollars is ten dollars."  The pilot overheard them and said, "Folks, I'll make you a deal. I'll take you both up for a ride. If you can stay quiet for the entire ride and not say one word, I won't charge you, but if you say one word it's ten dollars." Smitty and Martha agreed, and up they went.  The pilot performed all kinds of twists and turns, rolls and dives, but not a word is heard. He even does a nose dive, pulling up 15 feet above the ground, but still not a word. They land and the pilot turns to Smitty, "By golly, I did everything I could think of to get you to yell out, but you didn't."  Smitty replied, "Well, I was gonna say something when Martha fell out, ...but ten dollars is ten dollars!"