Pheebs & I took a little walk in the Moonlight Monday night & I later stood for a long while gazing at the stars overhead thinking back on oh so many great times we have had these past 10 years RVing during the winter months here in America’s great South-west.

Gusting north winds beat us up pretty good through the night & had me up around 2 a.m. for a bit & then again up for the day at 5.  One thing about the southwest I will not miss some day are those big winds that suddenly come roaring out of the night down through the mountain canyons & out across the desert floor to seriously hunt you down.

After making a couple phone calls about our Shaw Satellite TV LNB problem we decided to head back to Quartzsite & drop into a place called Satellite Advantage.  It was on our way home anyway.  The past couple weeks activities proved to be just a bit much for Kelly’s energy levels so we decided it best to head on back home & rest us up some.  I always seem to be happy heading home nowadays anyway so that was alright with me.  We hope to head out again sometime in February somewhere.

Steadying myself against relentless wind gusts I had the Jeep hooked up about 8 o’clock & minutes later under sunny skies we rolled out onto Ogilbe Road heading north.  Surprisingly we never had any wind problems all the way to Blyth California.  What a nice morning for a drive & the route we took was an old familiar & favorite one of mine.  Scenery was great & we again talked about how much we both enjoy coming to the southwest every year with all it’s desert greenery & mountain scenery.  We both agreed there was nowhere else we could think to go during the winter months where we would be happier than right here in an area of the country we love so much.  It’s not for everybody of course but it sure is for us:))

Rolled into Quartzsite & headed straight for McDonalds.  I was relieved to see there was no heavy traffic congestion like there would have been last week at this time.  No problem finding a parking spot at McD’s.  Outside of Tim Hortons McDonald’s still brews the next best cup of coffee in our opinion.  Satellite Advantage was just down the street on the other side of the main intersection so after leaving McD’s we headed on down there & rolled right in.  Took our satellite dish with attached LNB inside but they didn’t have a Shaw LNB to fit the smaller ellipitical dish we had.  Only alternative they said was to go with a newer 3 satellite LNB with a larger new dish.  We were looking at about $250 once the taxes & Canadian/American money exchange was figured in.  Said they couldn’t test our older LNB so not knowing if the problem was our LNB or not we decided to just head on home to Congress & see if it worked when we hooked it back up again at the house.  If not Pheebs & I would Jeep ourselves back to Quartzsite & pick up an LNB & dish Wednesday morning. 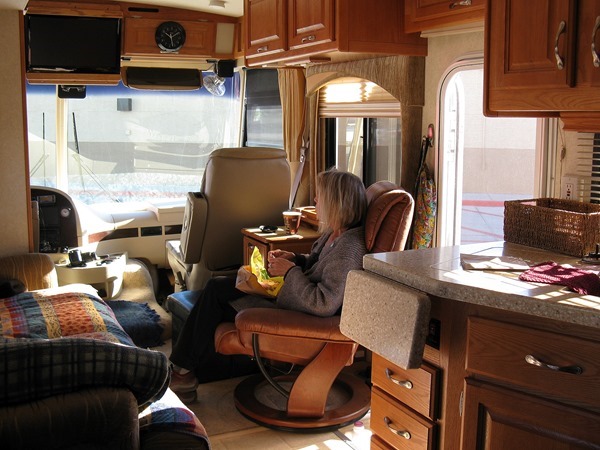 An hour & a half later we rolled through our southgate into our front yard & as Jackie Gleason might have said, “Ahhhhhhhh how sweet it is:))  Decided the first thing we would do even before unloading the coach was to set up our satellite dish & see if would work.  It did:))  We picked up the satellite signal right off the bat with no trouble whatsoever so what could the problem have been????  Now, I must be very careful how I write these next few lines………..When we do our satellite TV set-up I always do the outside stuff like setting up & levelling the tri-pod, connecting the cable to the LNB, attaching the dish to the tripod, & using my compass to locate where the satellite is in the sky.  Kelly does the inside stuff like hooking up 3 cables to the back of the receiver then configuring the TV to bring in the correct signal strength etc.  So that’s what we did Monday afternoon.  I did my assembly outside & Kelly did her usual thing inside hooking up 2 cables & ‘dam’ we could not get a satellite signal no matter how many times I checked & re-checked my set-up.  I must have scanned back & forth across the horizon 662 & half times.  We probably spent a good 40 minutes trying to solve the problem before finally deciding our LNB was cooked.  So what did we do different when we got home that worked??  Ok, let me just say this……if you go back & read what I just wrote you will find out where we made our mistake.  And that’s all I had better say about that if I know what’s good for me:))

Took us about an hour to get the rig unloaded & parked back in it’s usual spot & like previously mentioned we were glad to be home again although we were only away for about three & a half days this time.  I remember the days not that many years ago when we would easily spend 5 & 6 months of the year living in our smaller 33’ Damon Challenger Class A coach.  But since then things have been changing for us these past 4 years & especially this last year.  We have been having some rather serious discussions as of late about our future travel plans & what we want to do, where we want to go, how we want to go where………& when.

GROANER’S CORNER:((  Two men have been ice fishing all day. One has had no luck, while the other has pulled out a ton of fish. “What’s your secret?” asks the unlucky fisherman. “Mmmmm mmmmmm mmmm mmmmm mmmm,” the lucky fisherman replies. “I’m sorry; what did you say?  “Mmmmmm mmm mm mmm.”  “I still didn’t understand you.”  The lucky fisherman spits something into his hand and says slowly and clearly, “You’ve got to keep your worms warm.”